Halfway Through the Race and Teams Continue to Drop Like Flies

Coming to Africa is a special affair for most Americans. Only a dream, nearly impossible if you ask the average Joe or Jane. But being in a site like the North West region for instance – among the countrymen, eating local fare like Pap and Roostekoek, witnessing the spectacular wildlife – incites wicked desires to drop everything and make a pilgrimage to the origin of man. So, what better way is there to immerse yourself in exotic indulgences than racing a rally raid through the widest stretch of bundu in the country? Offering a diverse spread of cultural experiences, voyages to the most isolated areas South Africa can provide. A true test of wit, wisdom, senses, psychology and skill. The whole package in one place. And that place, the Kalahari Desert, doesn’t disappoint. A masterpiece of color, texture and a stillness so vibrant it moves you. It’s obvious organizers did their best to include every quintessential facet the Savannah is willing to extend. Because of that, the racecourse generously gave attendees with new types of terrain and a fresh horizon each stage, all specials, every few bends. 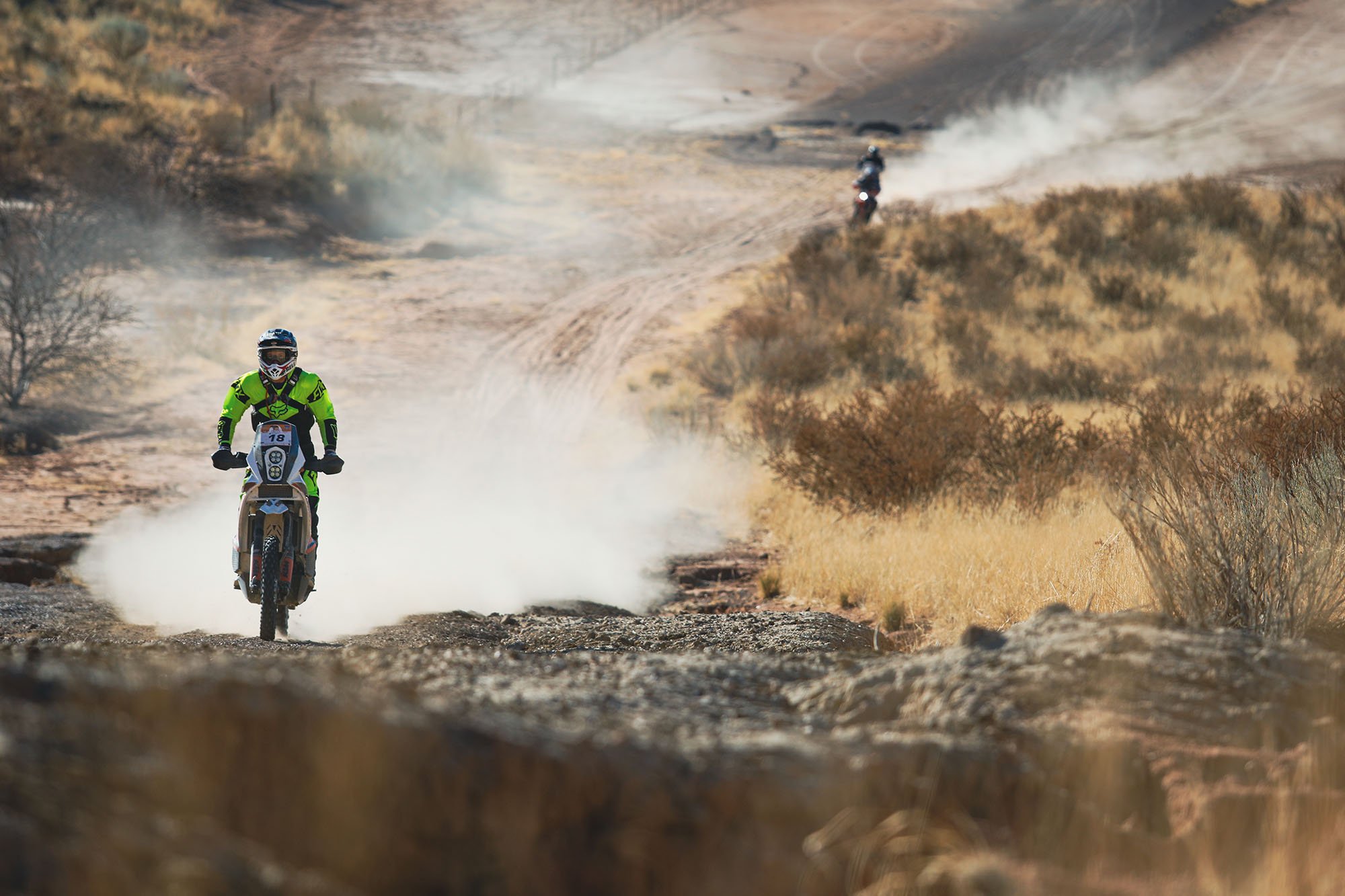 It was a dusty sendoff across the salt flats, and against the first light, the soft curtain of sodium chloride glimmered as race vessels sailed through the granules floating weightlessly in the air. A quick hill climb, some switchbacks through the brush, and straight into the copper and sage shaded dunes. The special was meant to be long – over 400 kilometers. However a discussion from the organization ultimately cut route short, lobbing off the tail of a monstrous trial, likely due to more issues with locked gates and miscommunication with landowners. An easy error for a fledgling event with minimal support – and yet, the competition continues to impress its participants and attain international recognition from such powerhouses as the ASO (Amaury Sport Organisation), which is why they continually choose the Kalahari Rally as the only Dakar qualifier on the southern half of the continent. Nonetheless, the changes in the roadbook resulted in another delay at the special departure, providing plenty of time to reflect on past performances this week. Or perhaps ponder the challenges to come. Plus, the two hours of watching the dawn gave the earth enough time to warm, because until then, the cold was all-consuming.

All too soon, engines were fired up in the bivouac, and throttles were wrung out in whaling unison as inopportune as 4am to fight off the morning frost. Carburetors needed the heat to guarantee their reliability along the 30km liaison. If you can’t keep her running, she won’t take you to the start. If you don’t get to the start, you don’t finish. Simple. But even if for whatever reason the athletes were late today, the impediment at Timing & Scoring was a baby blessing in disguise. While racers, riders especially, lost precious biothermal energy waiting for the green flag to signal go! they had unintentionally tolerated the pause for so long, day arrived before they could set off – bringing with it comfortable sun-kissed temperatures. One of the most promising stage launches yet.

To compensate for lost time, Motos were split into two groups for a sequential mass start, the frontrunners opened, then the next set of riders were unleashed. This made for a bit of mayhem off the line. A brawl to be King of the Hill. So, understandably, the speed picked up quickly. These long, arid wastelands they traversed are famous runways for setting landspeed records. A few fellas calling their ship “Bloodhound LSR” have already posted *blistering/surprising times here that are unmatched anywhere but maybe Bonneville. In 2019, the team achieved a whopping 628 mph in their Bloodhound on the infamous Hakskeen Pan – the world’s largest unworked saltpan. And they plan to run the dry lakebed again with the goal of reaching 1,000 miles-per-hour in a wheeled vehicle. 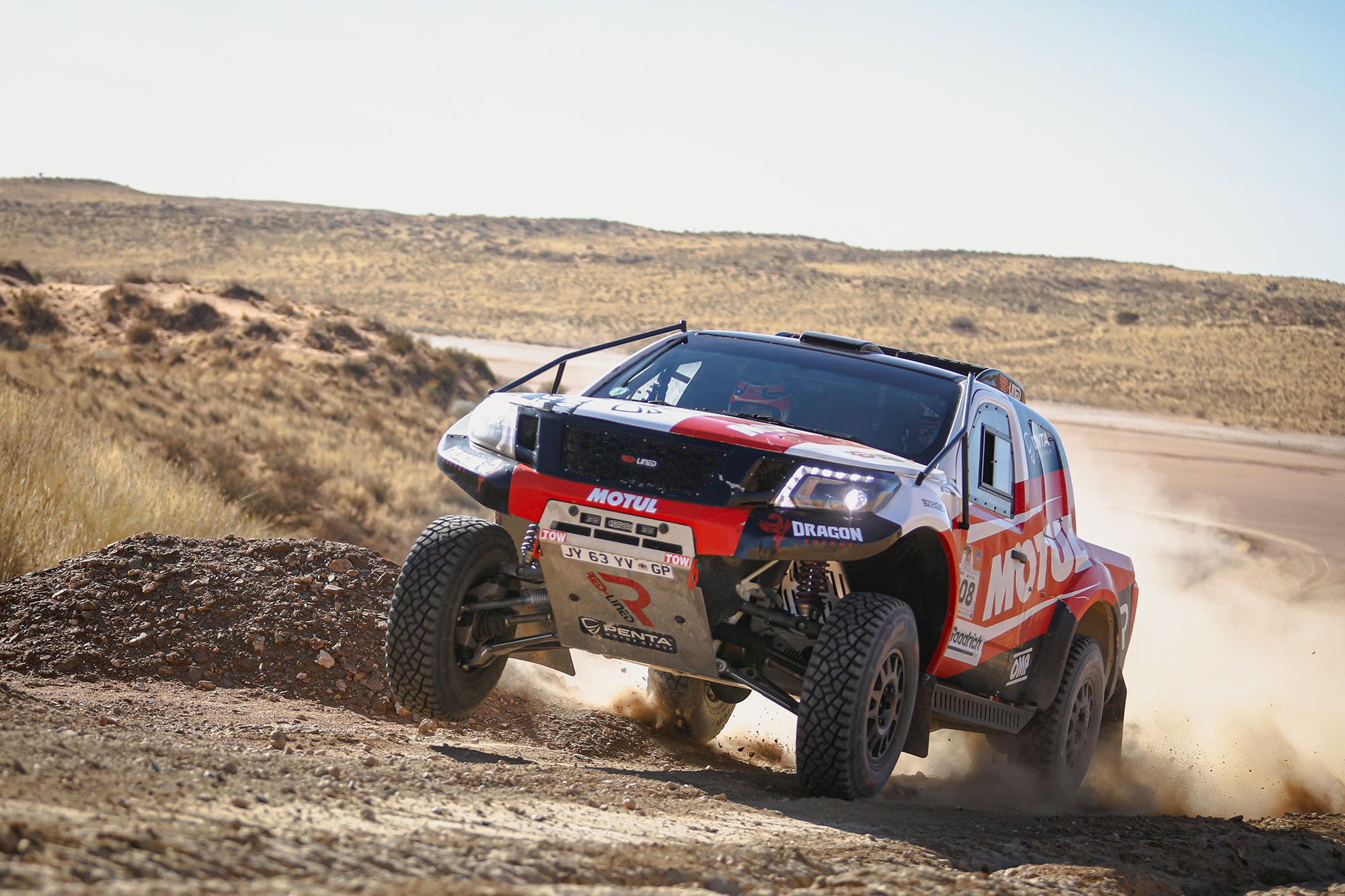 Although those in the Car category weren’t breaking sound barriers, they were going full send across the pan. So much so a few teams overshot the 90-degree righthand bend which was guiding them out of the bed and into high ground. Red-Lined Motorsports car #308 was the first to slide into sight. A cloud roosted from the tires as the front end of Terence Marsh and Riaan Greyling’ Nissan pointed forward in-line with their intended path, but the momentum drifted them sideways forcing them in a direction away from the trail of dirt. Eben Basson and co-driver Gerhard Schutte [#304, Red-Lined Motorsport] charged the rutted-out ascent despite the blinding veil left behind by the lead T1, doing their best to stay uncomfortably close. The last surviving autos were spaced out at the line but made quick work of closing the gaps. Hennie de Klerk’s BMW [#301], in particular, put pressure on the Red-Lined armada coming to blows with #308 in the sand. A wrong turn cost the Red-Lined owner the official the stage win, handing it over to Hennie and Adriaan Roets who made a surprising announcement in the bivouac. Regardless of taking today’s special on paper, the men decided to pull out of the running altogether, which planted Terrance and Riaan back on top. It was with a heavy heart, but they had found damage on the frame of their BMW and figured it might be too risky to try and patch the vehicle in the bivouac to send it out in unknown territory when the pace has been quick and the terrain and navigation tricky. And like that, Red-Lined dominated the herd.

Scattered within the ranks, the Side-by-Sides also kept the Autos on edge as much as their own class, making the T1 drivers reconsider their exchanging their expensive investments. Theo Erasmus and Johan Bekker [#202] maintained a good pace ahead of their adversaries in UTV #204 past a few Waypoints. But the impending waves of sand create the type of environment where destinies are uncovered, and for the last SSVs standing midway through the Kalahari Rally, #204 with Geoff Minnitt and Seigfried Rousseau on controls managed to exit the track with the crown after all, while the opposition – Hamish Horrel with Carl Oosthuizen in #201 and Joao Lota with Juno Santos #205 took noble positions at either side. 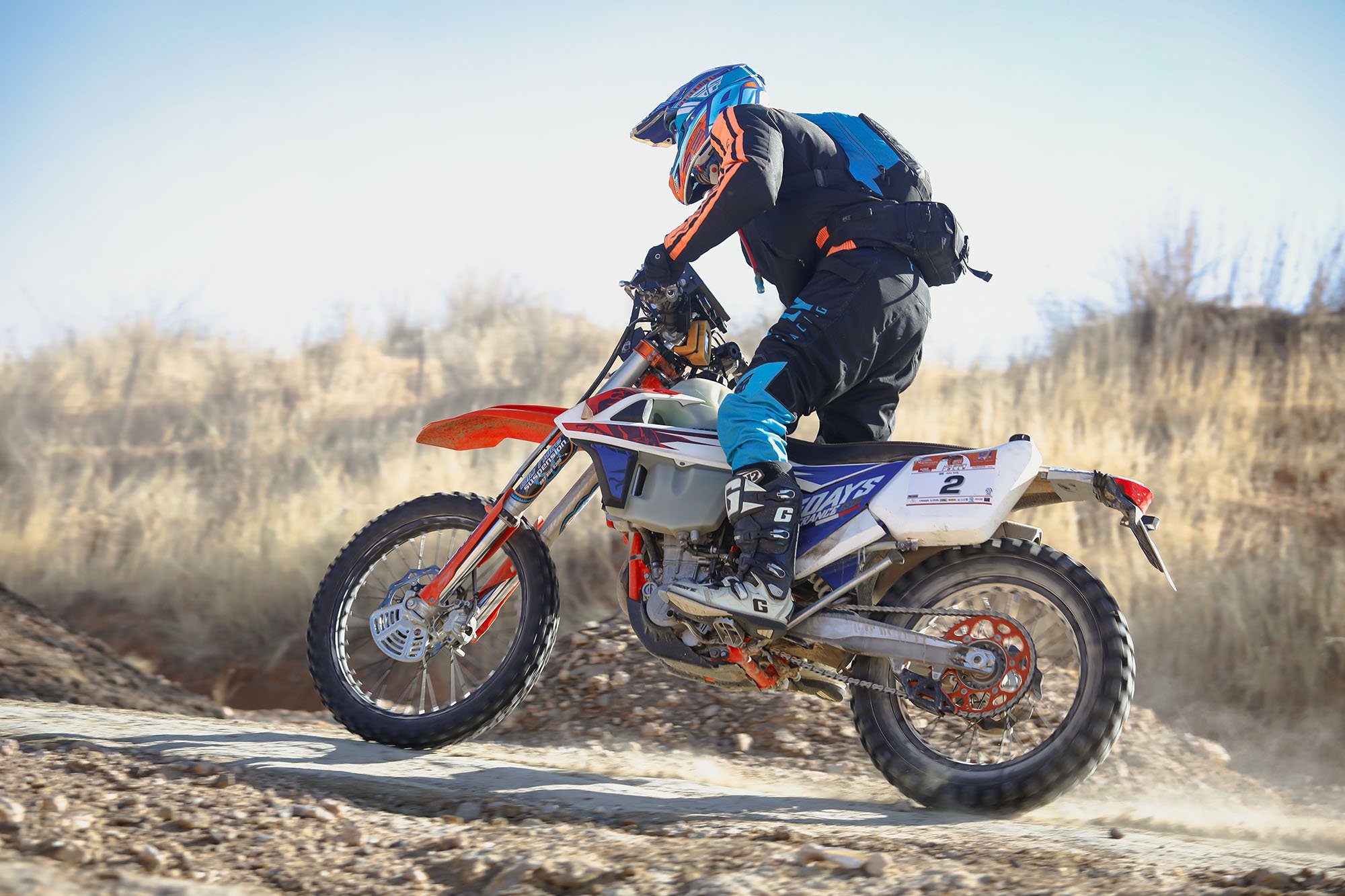 Ahead of the Autos, but not too far, John Kelly [#2] seemed the favorite again today. And again, complications slowed his rally to a crawl, allowing rival riders too many opportunities to strike. Yet, with all the setbacks, nearing the finish, Kelly kept his spot in the trenches. Plenty of talent reached the last sector of Special Stage Three looking the part. While others dragged themselves and their motorbikes across the finish line by tips of their fingers. Exhausted by the demanding challenges, #35 – trailing a confident #16, Hentie Hannekom – took a very graceful spill in a downward-facing pit of sand. Shit, I’m tired came after a distinct groan as he walked off his slowly tipping 450 Husky. Evidence of a hard-earned day. But whatever order the athletes waltz over the line doesn’t necessarily reflect where they’ll land on the leaderboard. The clock never lies, and with penalties shaking up things, the outcome can be deceiving. This is how Charan Moore [#73] gave up this stage for second seed. And also why four more competitors in this class succumb to the rigors of rally and must wave goodbye to contention. Gert Van Den [#874], who followed the rubber stamps in the sand left by #2 about 20 minutes earlier, managed a bottom step on the podium. But we’re only halfway there, still. And as mysterious as the Kalahari might be, so is the conclusion of this significant event. Will you wait to uncover the yet unknown in Africa?

Ø Close to the Kgalagadi Trans-frontier Park, Stage Three took a quick liaison from the bivouac in Rietfontein to the start in the Hakskeenpan. It took racers to their first set of dunes, albeit modest and overgrown. Teams also experienced saltpans, winding dirt two-track and long, flat fast sections – all near the Namibian and also Botswana borders. Navigation was considered medium to hard.

Ø Hakskeen is one of at least five such pans in Mier, a wilderness area dominated by rich red sand dunes (high in iron oxide) that average a height of 35 metres, great stick clusters that are the nests of sociable weavers (up to 300 of them live in any one colony), and some of the most breathtaking scenery in the country, provided you can take the heat. Mier is tucked up in the far reaches of South Africa where it dribbles away into a narrow wedge between Namibia and Botswana, most of it incorporated into the Kgalagadi Transfrontier Park. It’s the home of Open Africa’s Kalahari Red Dune Route, an ‘authentic experience’ route which helps generate income for the locals, and brings visitors to Mier.

A small group of !Khomani San who live here is all that remains of the indigenous San people of South Africa. In 1995 they were awarded 40 000 hectares of farming land in Mier, as well as a portion of the Kgalagadi Transfrontier Park just north of here (25 000 hectares). Known as the Heritage Park it is managed jointly by the !Khomani San, local Mier communities and SANParks. Hakskeen Pan falls into the area owned by the !Khomani San. [https://www.mier.co.za/hakskeen-pan/]

Ø This area has recently been in the news because, like its cousin Verneuk Pan, it attracts ‘speed freaks’ and is about to become the venue for the Bloodhound team’s landspeed record attempt (intent on a 1,000 mph World Land Speed Record). They initially attempted and attained a record speed of 628 mph in their “Bloodhound” vessel in 2019.