Possessing the Heart of a Hunter Wins the Prize Game

There are certain things you never think you’d say, like: “I think I see two guys on a motorcycle chasing an ostrich” or “don’t let that lion [cub] bite you too hard. He doesn’t know his own strength…” But that’s the magic of Africa – and giving travel a chance. It’s having memories and connections which would never have been possible without breaking free of the confines of comfort. The Kalahari Rally alone delivers such unique experiences, without feeling forced. Starting with the landscape. It feels familiar in a way, because we’ve seen exotic animals on the Discovery Channel or read about intimate moments between tribesmen conducting their ancient rituals in the works of Sir Richard Francis Burton and imagined ourselves on safari in the grassy savannah. We think we know it because we dream about it. And just when the mistake is made to doubt the real thing, to think it might fall short of your fantasies, this country shuts you up while simultaneously dropping your jaw to the floor. Yes, there are dangers here, as with so many places in the world. But the benefits far outweigh the small price of risk. Those who know rally understand this bargain – the inconvenience of being self-aware and independent for the fulfilment of adventure. And now, the tourism bureaus are encouraging everyone to come see for themselves just how diverse the sites and activities are in South Africa. 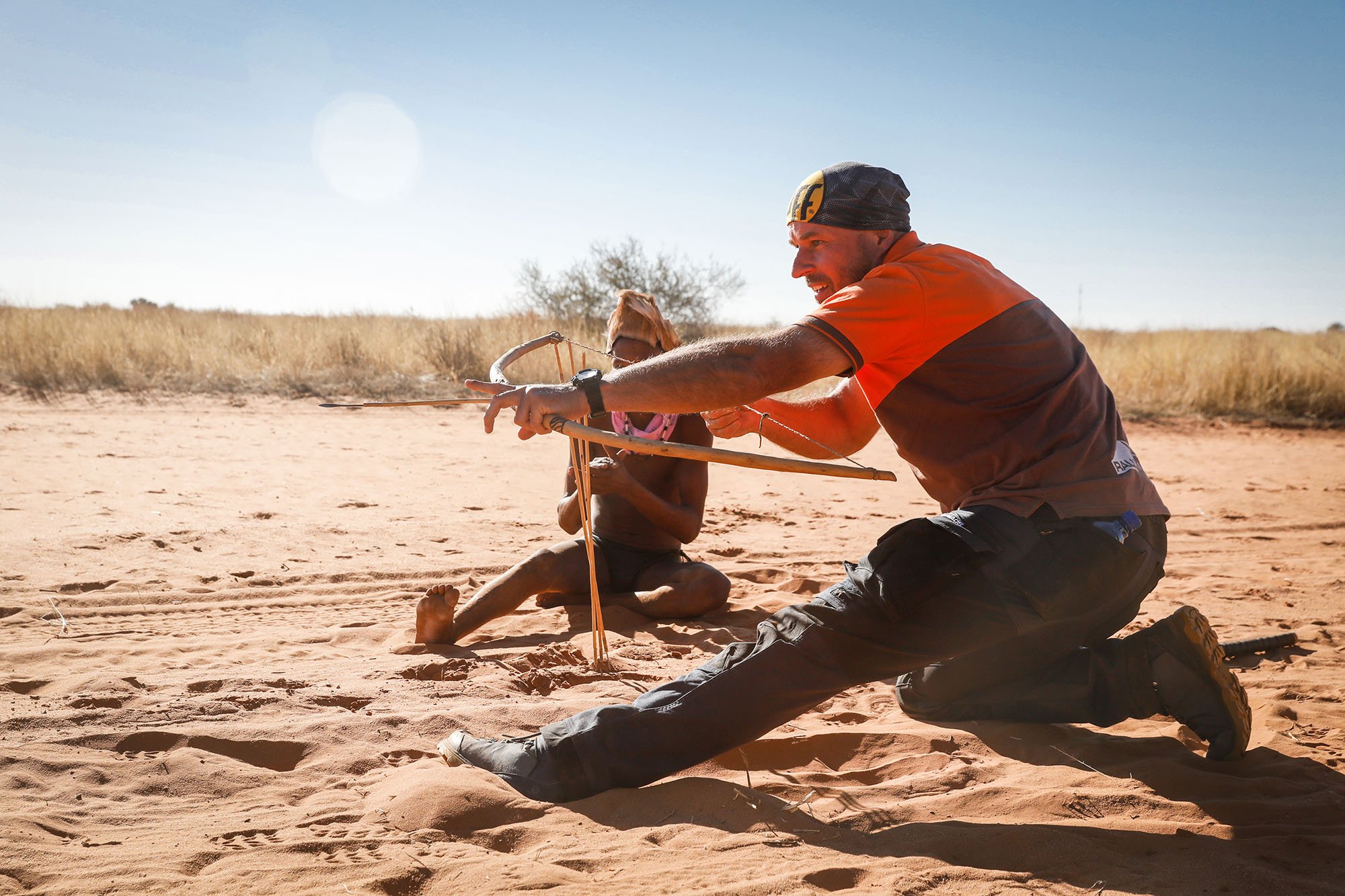 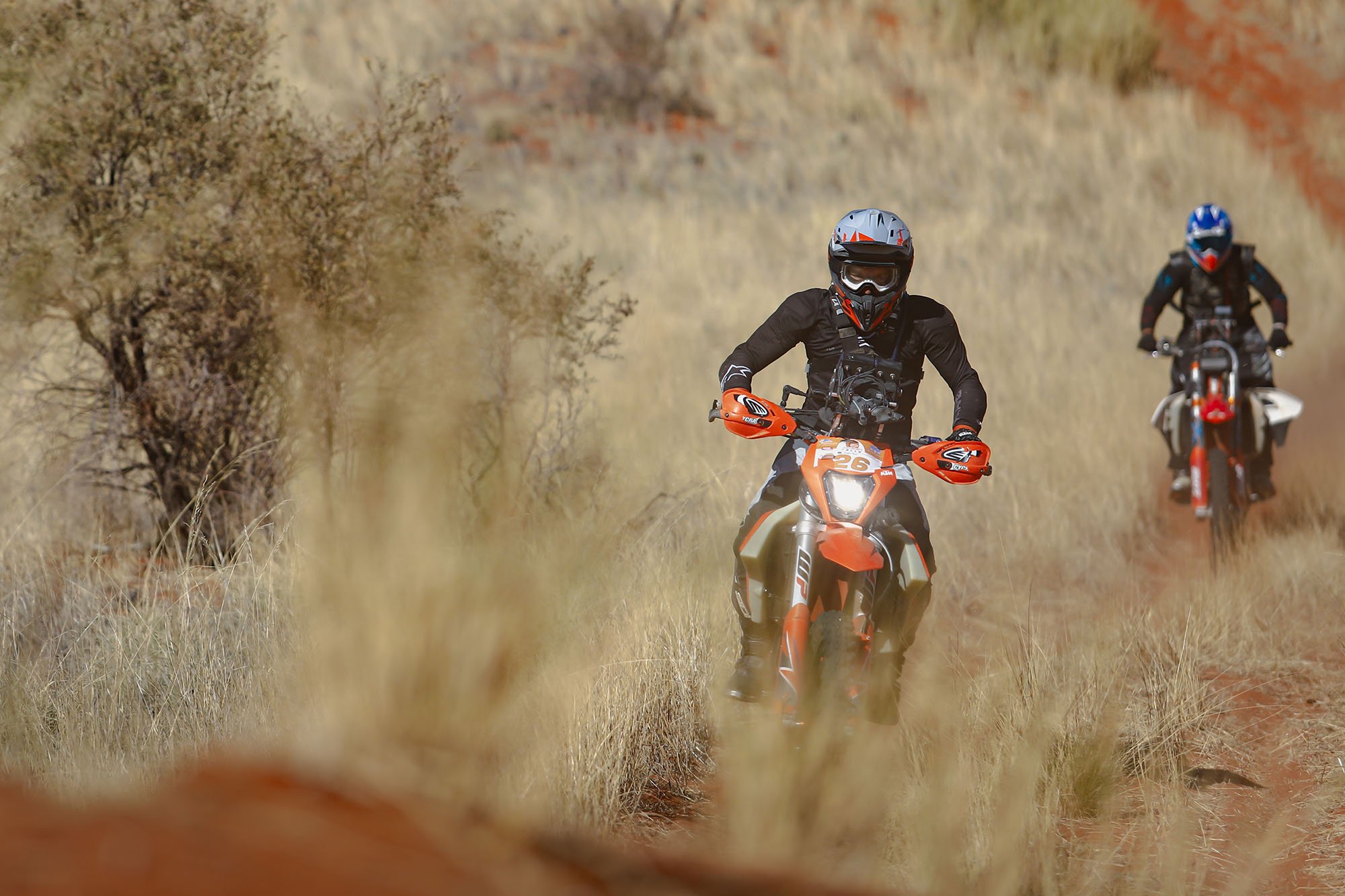 Stage Four began better than most. At the very least, the group set off on time – bikes in reverse order – with American local Dave Richardson #25 opening and John Kelly #2 closing it for the class. Autos followed shortly thereafter in their standing orders, and as expected, the head drivers surpassed a substantial group of Motos in swift time. So far, it seemed Terence Marsh and Riaan Greyling [#308] would continue to widen their gap in the General Standings today – giving them plenty of cushion, should they suffer any issues, to reset and still leave victorious. And initially, #308 was performing very well out the gate, but with some of the hardest navigation yet, several vehicles – including theirs – were lost within 80 kilometers. The soft, reddish sand hills, not quite dunes but with similar hurdles, were so sharp in places, the ascent was virtually blind. And with drivers and riders alike becoming turned around, the risk of a head-on collision grew uncomfortably high. So, although Terence and Riaan were a bit mixed up, and traveling (cautiously) against the stream, they sorted out their mistakes and righted their wrongs before anything catastrophic could happen. Like catching a rider at the crest of a sharp mound in the track and turning them into a South African snack for the Nissan T1.

This chink in their plan allowed teammates in car #304 manned by Eben Basson and Gerhard Schutte [#304] to seize the opportunity to pass. Philip Botha with Roelof Janse Van Vuren in #305 was dead set on Red-Lined cleaning house once again, which appeared quite possible now with Hennie De Klerk and Adriaan Roets #301 out of the running. That, and there’s only one other machine on the course with different badging. But buggy #312 was being piloted carefully and consistently [read: slowly], looking as if Dewald Van Breda and navigator Johann Du Toit might not catch up to the armada. Alternately, their caution gave them better probability of finishing. An added and unforeseen bonus is having more time to revel in such an infamous region of Africa. The home of the Kalahari Bushmen, the Khomani San who academics have declared to be most closely related to the earliest Homo Sapiens. A testament to their resilience in a volatile environment. Their ancestors have spent millennia studying the flora and fauna, following tracks and living off a very delicate environment. And their bravery on a hunt has long ago earned them a reputation for being the most fearless nimrods in existence today. So when you’re here, racing over red earth and tangling in all the menacing indigenous vegetation, channel the Bushman, carry his spirit, keep his focus and his patience. Use this strength and mentality to be your guide to the finish line. 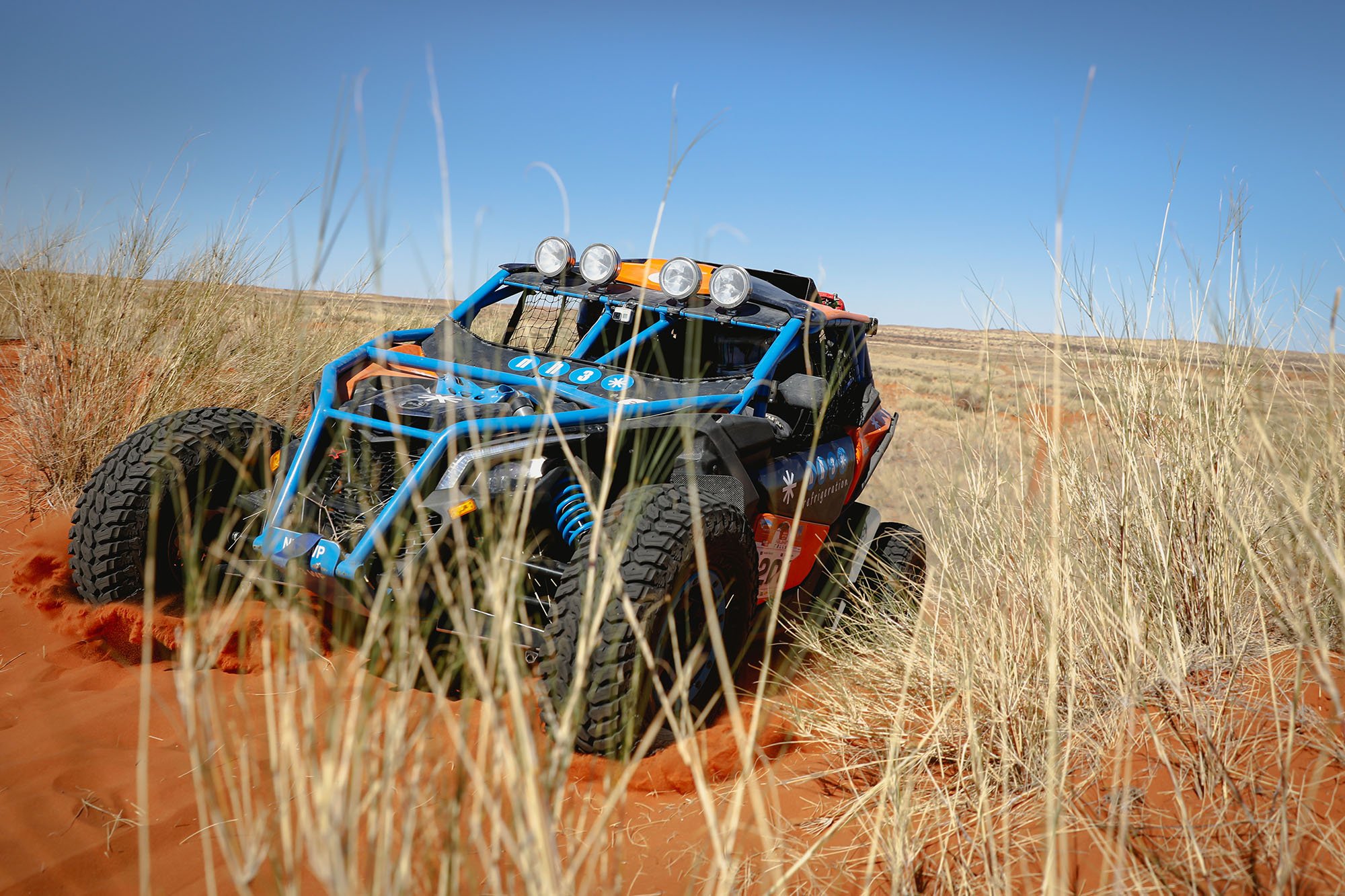 From the outside looking into #204’s cockpit, they’ve been wearing their war paint all week, tussling with the Mariendal tribe – #202 led by Theo Erasmus and Johan Bekker – for command of the podium. And today their efforts paid off, as the WCT Engineering chiefs conquered SS4 standing atop Mariendal who also lost to SxS #201 for Second Place. The Angola Rally Team, with Joao Lota and Nuno Santos at the helm, took a backseat at fourth seed, further blurring the odds. Waging their own battle, the knights on horse(power)back found themselves in an invisible labyrinth, with endless those 90-degree or less turns laid out in such a precise manner, taking their gaze away from the French petroglyphs for too long could spell disaster. …But so could staring at the roadbook. Life’s about balance, and choices, and the resulting consequences will switch the trajectory to either win or lose. In John Kelly’S case, his #2 KTM 450 was set for Triumph, taking the stage in 4:40:47, making KTM South Africa’s pro Charan Moore [#73] grind to hold onto his overall lead. To many, Second is the first loser. But in rally raid, positioning yourself the next few rungs down the ladder can be a strategy in and of itself. It’s certainly not a failure. For one thing, a pilot isn’t forced to open the stage, and if the roadbook is dizzying, this can really put pressure on the initial vessel pursuing the proper line. With so many variables involved in this sport, a few of which athletes have little or no control, daily placement isn’t usually foretelling of the final results. So with Kelly on the throne, Moore just below and contenders Hentie Mannekom #16, Ruan Burger #77 and Gert Van Den Berg #874 pushing up the rear in the third, fourth and fifth, there’s still so much action to be had before the closing ceremony.

The Khomani San are peaceful vagabonds, hunters and gatherers whose hearts beat for the land. Places like Erin Game Ranch are owned and operated by their respective clans (Erin’s by the !xopan) with help from contemporary conservationists who together conceptualize intimate cultural tourism opportunities from the ground floor up – the natives being integral in the decision-making. This lifestyle, like in rally raid, is about community. Bringing men and women together to celebrate traditions, share food and give thanks – in one way or another – to all the great outdoors has to offer. And if rally is to survive, also as Bushman endeavors to do, it’s the support of the People. If only by staying interested, it’s that attention and love which will keep both rally, and Bushman, alive.

Ø Modest in overall size, Stage Four is a tricky, technical challenge intended to catch racers off-guard. It’s a brand-new route for the event, with sharp peaks, swift drops and very tight sections in the dunes. There are sections with negative cambers, altogether not offering many high-speed opportunities. The navigation is considered a medium.

Ø In the South African side of the Kalahari, the (fairly) recently united Bushmen tribes have been working with tourism organizations, and eco/cultural/adventure tourism experts to offer their conservation lands for authentic tradition experiences, from tracking and hunting to jewelry making, crafting, observing clan rituals, archery and wildlife viewing. This effort is to create income for the community as well as combine modern and ancient methods for conservation of the region and cultures.