In an Era of Uncertainty, This Is Only Sure Bet in South Africa

A misnomer about the final stage is that it’s the shortest trial. Kilometers are condensed, starts are moved to late-morning and celebrations are scheduled for much earlier than seems possible to complete a full special, liaison and (if all goes well) a shower. Too often a few members of the orga and many of the racers relax their shoulders after the penultimate special, feeling they’ve made it to finish, so what can go wrong in one little loop? This mindset, the cheerful mood, the lack of urgency, often leads to mistakes. It’s the perfect formula of complacency and vulnerability – guards down, bellies exposed – which gives fate an opportunity to strike with a rusty blade. The best which can happen would be that no one ends up hurt. But inevitably, one of the principal vehicles will slow their race down or lose a bit of focus or feel so secure in their position they begin to treat the competition like a Macy’s Thanksgiving Day parade. Inadvertently leaving the door open for a determined rival to swoop in and shut it behind them. Even if it’s only the boys and girls at the back letting their hair down… They’re tired. Maybe they’ve already attained their goals – typically revolved around reaching the last challenge. The conclusion of the race usually dials the pace down from demanding to languid, if nothing else but to prevent any undue stress on the machines. Usually. 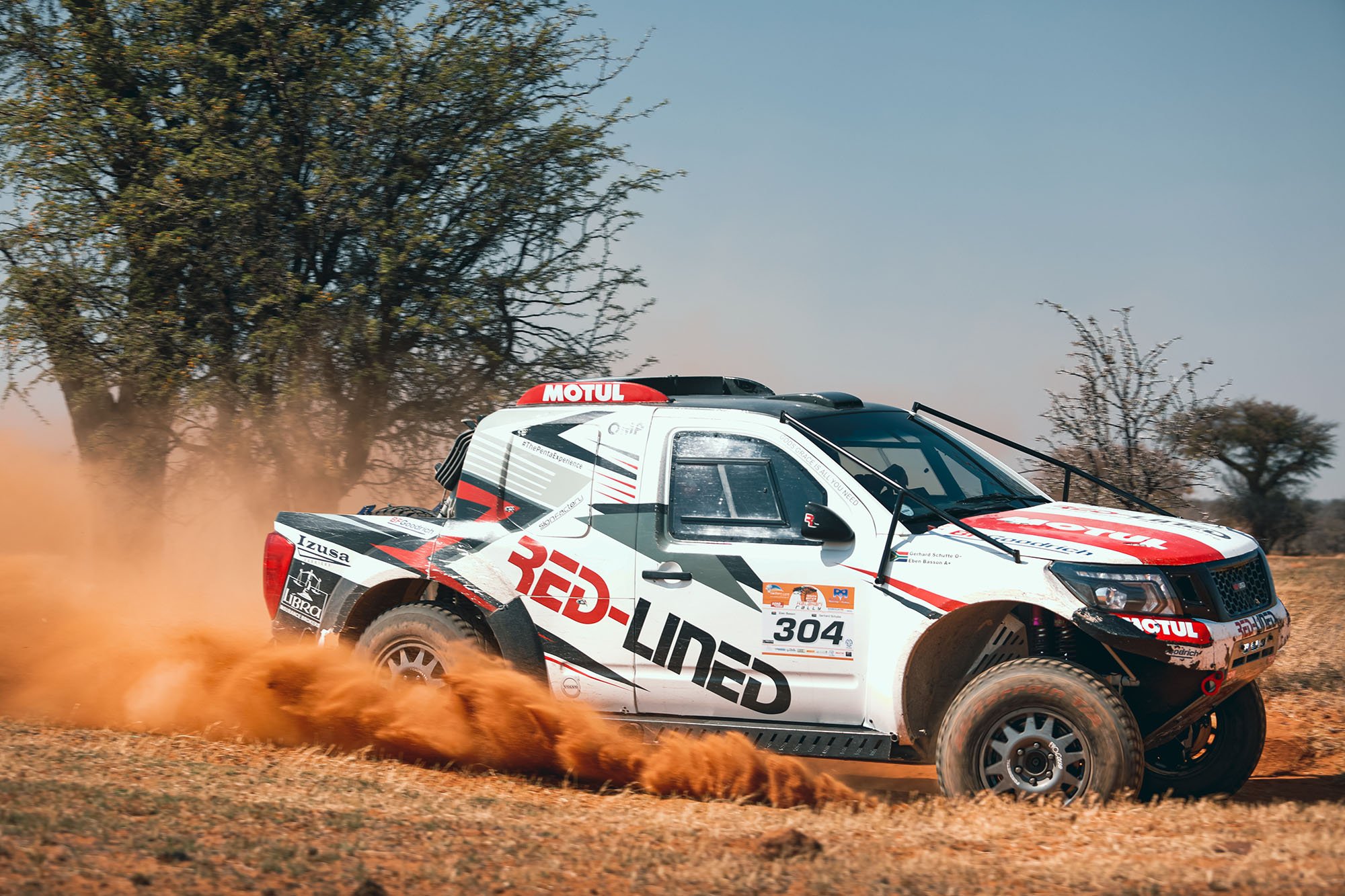 The Kalahari Rally, however, didn’t get the memo. Unlike what’s often found in other rally raids of this size and stature, the sort of le se faire attitude at the finale hasn’t yet tainted the Kalahari. Those contestants still standing didn’t let their guards down in SS6 any more than they had all week. If the only objective now was to reach the Red Bull Arch in the bivouac, then that was ample potion to push them onward. If it was to squeeze each second out of their time and put themselves in a respectable seat on the scoreboard, then today they pulled off their best effort. And if the Winner’s Circle is within grasp, then you all better move the hell out of the way. In the Auto class, this was certainly the sentiment among the Red-Lined Motorsports Nissans, who battled each other to the bitter end. Relative newcomer to the sport (i.e. his first ever rally raid), pilot Eben Basson was channeling a fighter jet, doing his best to break the sound barrier before navigator Gerhard Schutte even read the bearings at T033 out loud. Their #304 was roaring into every apex, the backend swinging the T1 into the next turn obliterating anything which dared wander into its path. The pair made quick work of the track trying desperately to gain on Terence Marsh and Riaan Greyling in #308 who, as of Stage 5, held the Overall title only 00:38:10 minutes ahead of their team counterparts. A daily brawl for matching VK56’s. But despite the powerful performance of #304, crossing the line first only counts so much if a couple Waypoints are overlooked. Yet, they weren’t the only to make mistakes, ultimately placing #308 third and Buggy #312 second in the pecking order today, which circumstantially gave Basson and Schutte the stage win.

Electricity was surging through the cars and remaining buggy, the latter – #312 Century Racing CR5 – lit a fire under their carriage, moving swifter than Dewald Van Breda and Johann du Toit have driven her since the first send-off in Mafikeng. A detail evident by their stellar results. UTVs likewise sent it until they rolled under the infamous Red Bull Arch. The mighty men from Angola gave everyone in the bivouac a hearty laugh when they limped in a war-torn #205 who tragically lost a tire in the hindmost section. But Nuno Santos generously counterbalanced their vessel – hanging onto the passenger side of the SSV – while Joao Lota babied it to the bivvy. Nonetheless, the duo parked their rented Can Am Maverick X3 into the second spot in SS6 and the General Standings. Pretty great outcome considering the last time they tried to race this event, they were denied at the border into South Africa. They can certainly consider this achievement a victory in its own right. Having a much simpler go at things was the favorite to win, #204 captained by the WCT Engineering pirates Geoff Minnitt and Siegfried Rousseau. No one doubted their reign over the side-by-sides and sweeping the ranks taking hold of that prized Winner’s Circle. Formidable adversaries indeed, the #202 and #201 utility-mobiles fell into the rear.

There are only so many ways this could have played out, but it’s still exciting to receive the impending notification that results are in. Motos were an exciting bunch to watch with pro-level talent going head-to-head at the top, while mid-pack and beyond were instead struggling to overcome the elements, the roadbooks and themselves. A fine display of passion, persistence and humanity among the group made this event so significant to witness firsthand. But a race is a race. And it’s just as important to follow the pursuits of the premier riders as well. Only eight minutes separated leader John Kelly [#2] and KTM South Africa pro Charan Moore. But after being tossed over his handlebars yesterday, Moore suffered several mechanical issues which he tried desperately to remedy before the morning – accepting a contention-ending penalty. But it wasn’t in the cards, and by dawn, it was clear #73 wouldn’t be gracing the course with his impressive enduro-esque riding skills. We missed all the air he would have caught on the day’s whooped out route. What do they say? As one door closes, another one opens. And Moore’s departure definitely unbolted a few passages for #874, Gert Van Den Berg, and #16 Hentie Hannekom, who similarly benefited from their colleague’s loss. Van Den Berg even took the special, with Hannekom stepping onto the next step. Kelly ended this on the bottom step of the podium, but no tears were shed as he was crowned King of the Kalahari in Bikes – also being awarded the cherished Road to Dakar free entry to its 2022 iteration. For the Overall Classification, #874 concluded second best and coming up the food chain, Gary Pretorius [#8] filled in the trifecta, even after some rough patches. 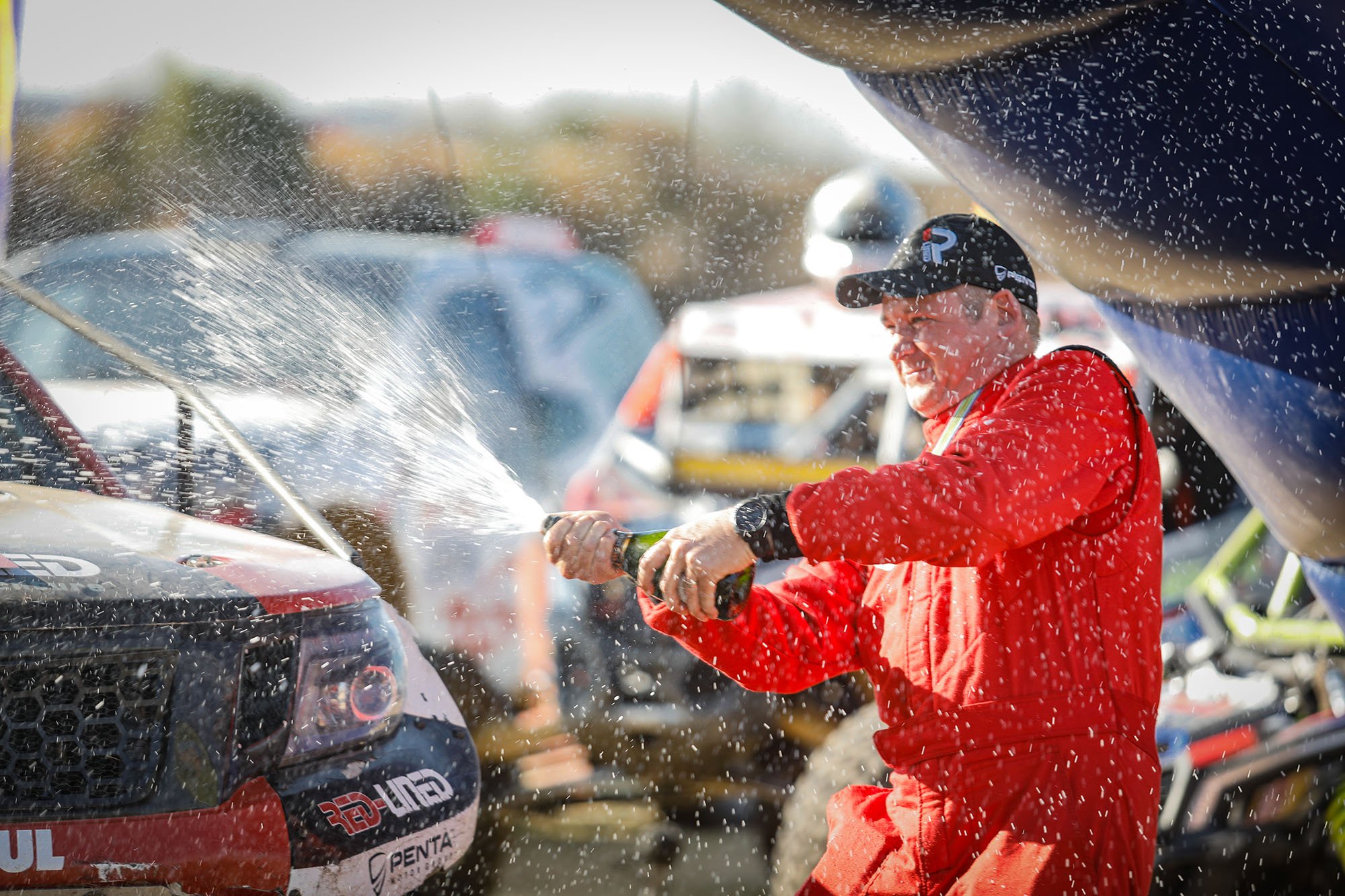 When that moment happens, the winners are named and the medals are distributed to the finishers, it will be remembered. Because at the Kalahari Rally, what makes the contest so special, are the locals. Those who participate and those just hunting down a good vantage point to watch the heat ensue. These people who come to compete in a new, promising off-road event or merely to show their support, cheer on your triumphs and bemoan your failures. To drink beer in your honor and praise even the most grassroots of rookies through to the bitter end. It’s the characters which determine, well, everything. And if one were to wager the success of the Kalahari Rally solely on this essential element, considering all of the hardships, the hot days and cold nights. The endless barrage of dust and rocks and potholes. No doubt, a gambling man would slap every last dollar on the table in favor of South Africa’s only answer to world class rallying.

Ø The Finish went off with a bang, sending racers over a volcano on fast, flowing tracks. There was some brush over the hard-packed mountain range with a few steep, rocky climbs and descents. They buzzed the Botswana border one last time before heading back into Mafikeng for their final results. Navigation is considered a Medium with complicated sections along the peaks.

Ø Skilpadshek (Afrikaans for tortoise gate) is a border checkpoint on the South African border with Botswana, located 52 kilometers (32 mi) north-west of Zeerust in North West province. The corresponding checkpoint on the Botswana side of the border is called Pioneer Gate. The Trans-Kalahari Corridor passes through Skilpadshek, and it is the western end of the N4 road, which continues in Botswana as the A2. [https://en.wikipedia.org/wiki/Skilpadshek]

Ø The Road to Dakar challenge was awarded to Overall Moto winner, #2 John Kelly from Botswana. As an added bonus, the Kalahari Rally generously offered a prize to Philip Botha in Red-Lined Motorsports car #305 in the form of 8,000€ to be applied to an entry for the 2022 Dakar Rally.