May 17, 2021 (San Felipe, Baja, MX) – Baja brings out the best in people: teams, racers, cars, and staff. The 2021 El Rey de Las Bajas was no exception. All classes battled a challenging 22-mile loop course full of rocks, silt, sand, whoops, and fierce competition. The 4400 Unlimited class did 5 laps (110 miles) of punishment, while the Yukon Gear and Axle 4500 Modified class and Branik Motorsports 4800 Legends class did 4 laps (88 miles). Can-Am 4900 UTV competitors crushed it during their 3 laps (66 mile) race and the ever-popular Spidertrax 4600 Stock class did 2 laps (44 miles) in the harsh San Felipe desert. ULTRA4 Racing is known for vehicles that can race multiple types of terrain with power and authority. The “Swiss Army Knife” of off-road racing, this course challenged the desert racing side of things. Round 1 of the Western series challenged rocks in Moab, UT, but San Felipe threw heat, sand, ruts, whoops, and rock at the drivers. All courses are designed to challenge different aspects of the cars. Qualifying was a 1-mile sprints through pieces of all these elements to see who would have clear air and who would eat DUST. The AM race featured 37 cars across 4 classes leaving in 30 second increments. The Afternoon race featured 35 Unlimited cars on the same 22-mile loop. Clear air was a precious advantage with so many cars on each race. 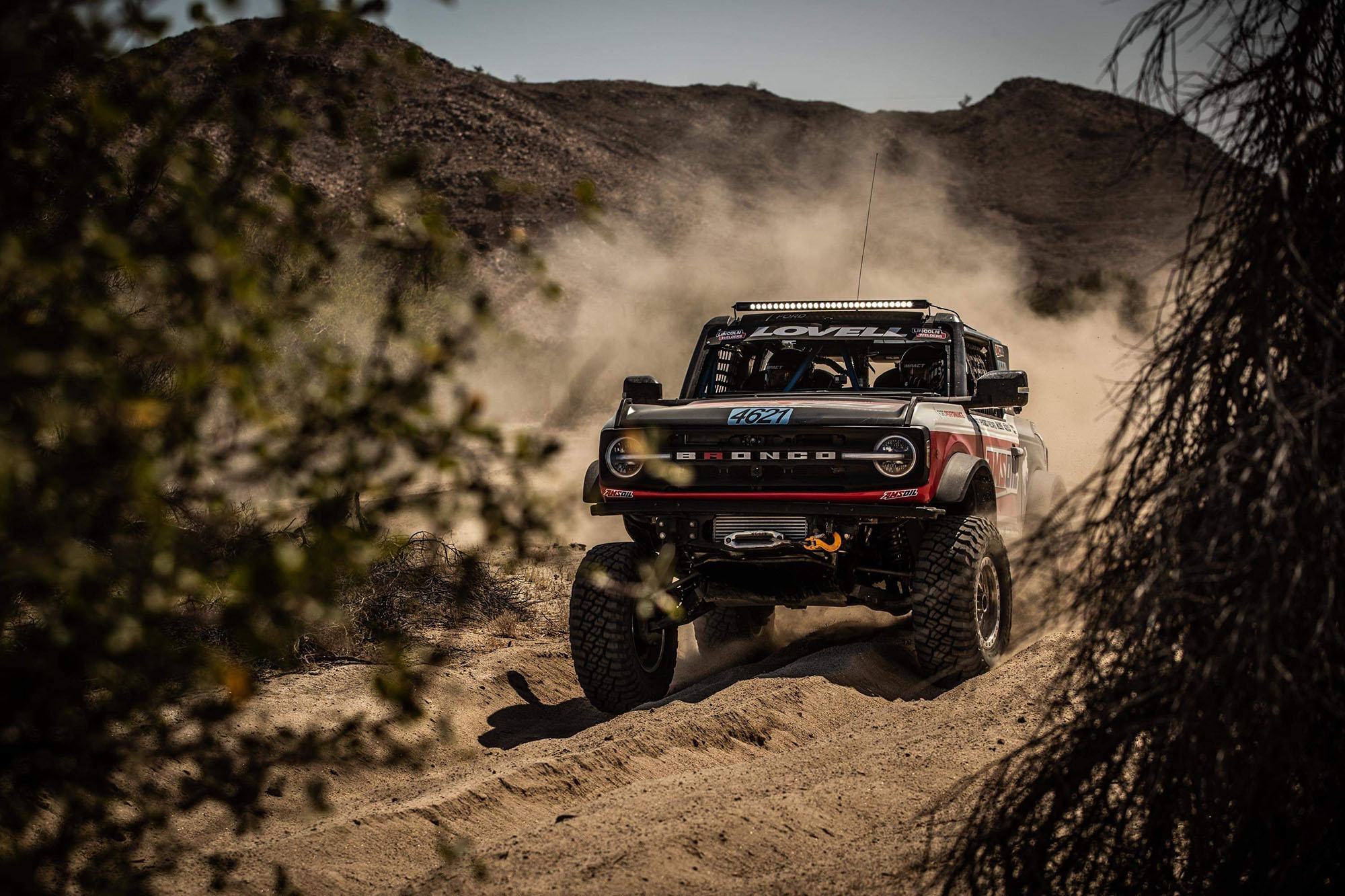 Taking the pole in the Spidertrax 4600 Stock class was Brad Lovell in the first race for the new 4600 class Ford Bronco, followed by Sean and Brian McNamara and Josh Twitchy McGee. Over a half dozen stock class cars entered the field to test themselves, their crew, and their cars. The Can-Am 4900 UTV class pole was taken by Josh Smith once again (Josh was the Area BFE Beatdown pole winner in Moab), followed by Cole Clark, and Jacob Versey. Yukon Gear and Axle 4500 Modified class driver Richard Lavezzo took the pole, along with Shaw Rants in 2nd and John Grounds close behind. Visiting the Branik Motorsports 4800 Legends class was reigning King Randy Slawson in a 4800 class Bomber earned the extra 7 points for taking the pole, followed by Chayse Caprara and Logan Goodall. Winning the pole in the 4400 Unlimited class was no stranger to success, defending 2019 winner Paul Horschel, edging out Jason Scherer and Loren Healy for the honor and the bonus points. Counting Randy in the 4800 class, there were 4 Kings (representing 11 King of the Hammers victories) running in this event (Loren Healy – 2, Shannon Campbell – 3, Randy Slawson – 3, and Jason Scherer – 3) Race day started with a beautiful sunrise, the sounds of the ocean, and the smell of tacos as races enjoyed a later start than normal. The AM race was a combination of the 4500, 4800, 4900, and 4600 classes. While all classes were on course togethers, racers were only racing others in their class for position. The other classes were just obstacles.

First of the line was a combination of the Branik Motorsports 4800 Legends Class and the 4500 Yukon Gear and Axle Modified class. The race format was a total time format, so drivers starting in the front had a clean air advantage, but all drivers were scored on corrected time as well as total laps completed. The 4800 Legends class was a mix of retired 4400 class cars and newly built Legends class cars. 1 shock per corner, 37” DOT approved tires, and front mount engines create a growing class where experienced cars can continue to live. The 4500 Modified class is similar in being tied to 37” DOT tires, but is allowed 2 shocks per corner, but with more restrictive frame and body rules than Legends. 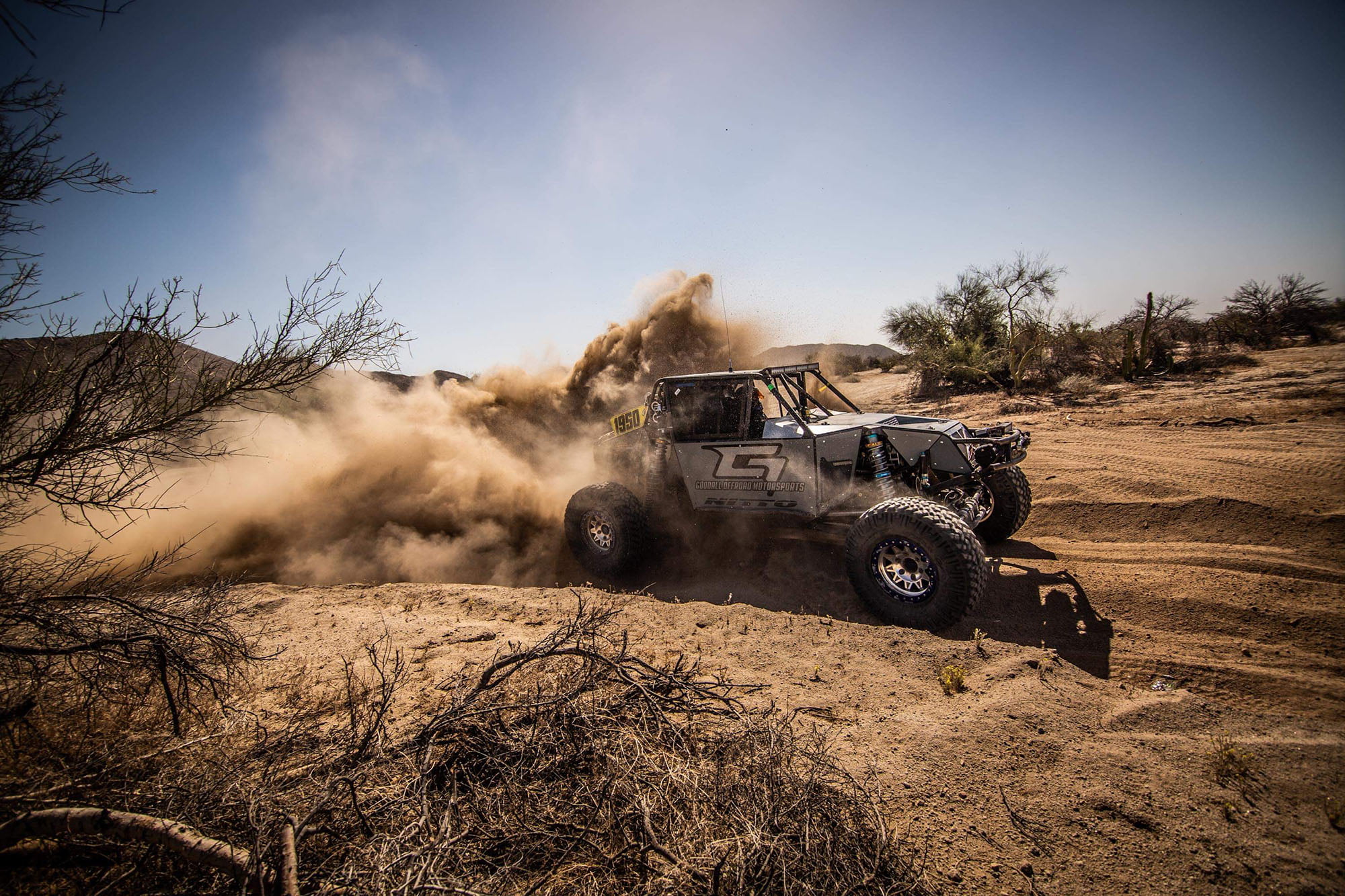 When the checkered flag waived, 2nd generation racer Logan Goodall stood atop the 4800 Legends class box with the first 1st place trophy for Goodall Racing! A strong family team that has been nipping at the top of the podium finally earned their way to the top. Logan was followed closely by Area BFE Beatdown winner Cody Young, and 3rd was taken by husband-and-wife team of Eric and Nancy Wikle for their first ULTRA4 podium. The 4500 Modified class saw a familiar and experience face on top as Shawn Rants lifted the hardware for first above his head. Shawn was followed by John Rands (who was also racing 4400 class on this day) in 2nd, and Richard Lavezzo in 3rd. Next off the line was the Can-Am 4900 UTV class. While a smaller group of racers than in other races, the best of the best showed up for San Felipe. Ripping off the line, their machines were built for this type of terrain. In a fun twist, Race Director JT Taylor removed all bypasses for the 4900 UTV class as the cars are getting more and more capable in the rocks. These guys ran the exact same course as the 4400 Unlimited class. The Blonde Ambition himself, Jacob Versey, powered his way to the top of the podium, following up a strong showing at Moab in April. Hot on his heels was Josh Smith, this events pole sitter, getting his 2nd straight podium. Rounding out the podium was veteran Travis Zollinger in his single seater. 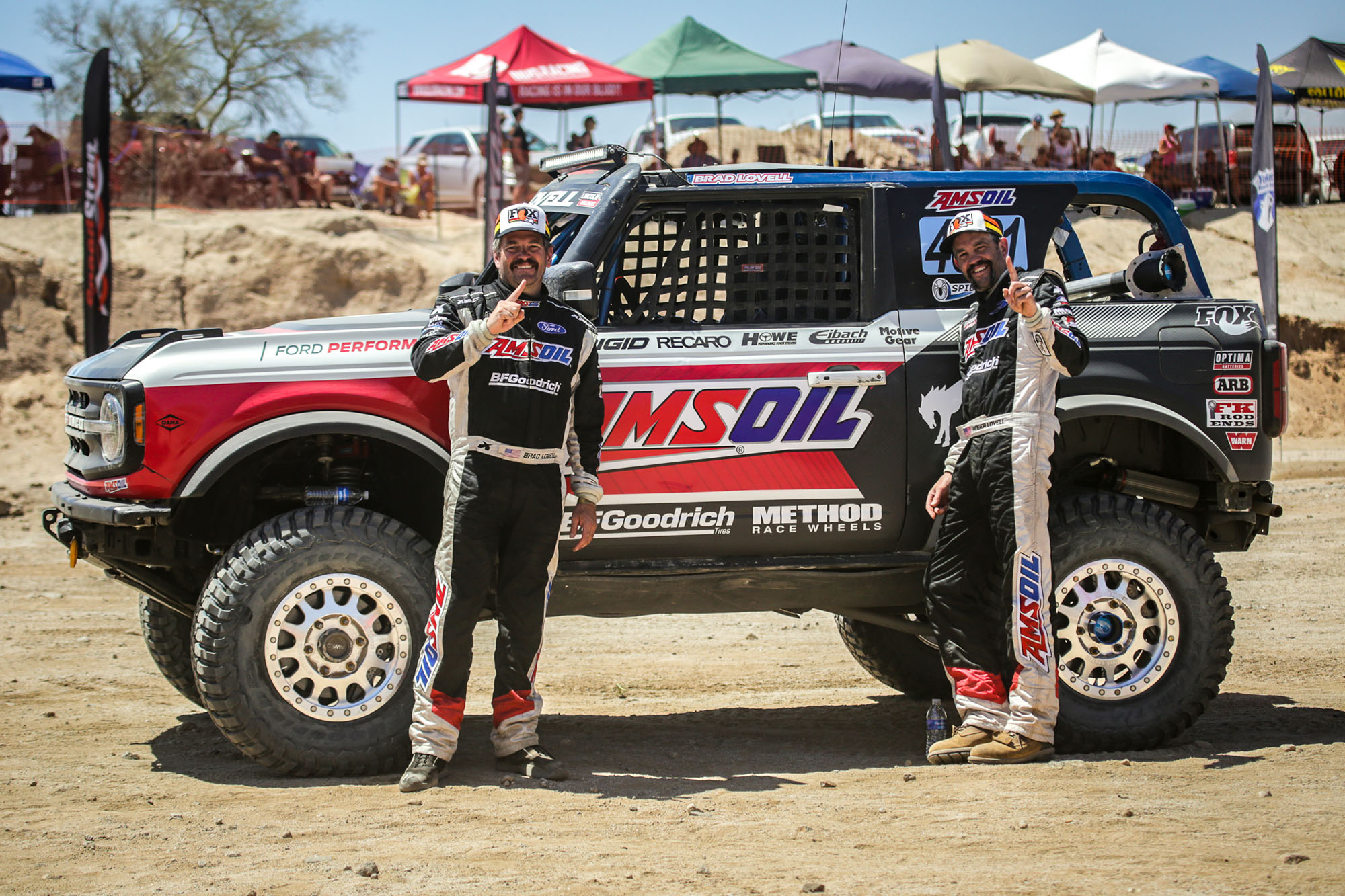 Last off the line was the Spidertrax 4600 Stock Class, featuring a long-awaited debut of the new Ford Bronco, driven by brother Brad and Roger Lovell. First revealed at the 2021 King of the Hammers, this was the first ULTRA4 race for this stock class machine. Engineers from Ford were onsite, as true off-road racing is just part of the testing these new Broncos go through. After winning the pole, Brad followed up by putting the Amsoil Bronco in first place atop the podium. Twitchy McGee battled to 2nd place, and brothers Sean and Brian McBNamara rounded out the podium. Part of why the Spidertrax stock class is so popular is the variety of vehicles competition. Right beside the brand-new Ford Bronco was EMC class winner Justin Reece in his 30+ year old Toyota pickup on leaf springs. The podium included a Jeep JK and an old school Jeep Cherokee. If you watched carefully, you could also see a newcomer Sami in the mix. 44 miles at race speed on these vehicles brought the smile and the pain as they were cheered on heavily by the local fans. The afternoon race of the El Rey de Las Bajas was the main event: the 4400 Unlimited class. With a field stacked full of kings, previous winner, and experienced desert racers, the energy level went up 10-fold. The mayor of San Felipe waived the green flag, releasing these beasts into the desert for 110 miles of punishment and adrenaline in 30 second intervals. Racing was extremely competitive, with multiple lead changes and pit strategy playing a key role in success. Veteran racer, multiple King of the Hammers winner, and Monster Energy athlete Loren Healy was a man on a mission after his Moab results. Strong, steady, and fast, Loren worked his way to the front in his Bronco inspired IFS machine and never looked back once he got clean air,. Traditional wisdom is that IFS cars are faster in the desert, and it was proven this race with a trio of IFS cars taking the podium at the end of the day. Nitto Tires swept the podium with Loren Healy in first, Raul Gomez in second, and JP Gomez in 3rd. Brian Caprara finished just off the podium in fourth, with Brian Crofts – the Area BFE Beatdown winner – rounding out the top five positions. The Brian/Bryan’s were followed by Loren’s teammate Vaugh Gittin Jr in 6th, 3 time King Jason Scherer in 7th, Baily Cole in 8th, Chip MacLaughlin finished 9th, and Kris Wicks rounded out the top 10 in his Bomber.

To earn National Championship points, driver must compete in KOH as well as Nationals (October 15th and 16th in Reno, NV), plus at least 3 regional races. The 2021 El Rey de Las Bajas was a thrilling second race in the West region and has really tightened the battle for points in all the classes. Next up is the North series opener in Broadview, Montana, June 10 – 13, followed quickly by the East Round 2 at Adventure Off Road Park in East Pittsburg, Tennessee on June 25 – 26.

You can see the full schedule of events at www.ultra4racing.com

Thank you for covering our sport Curtis. Great writeup as always!