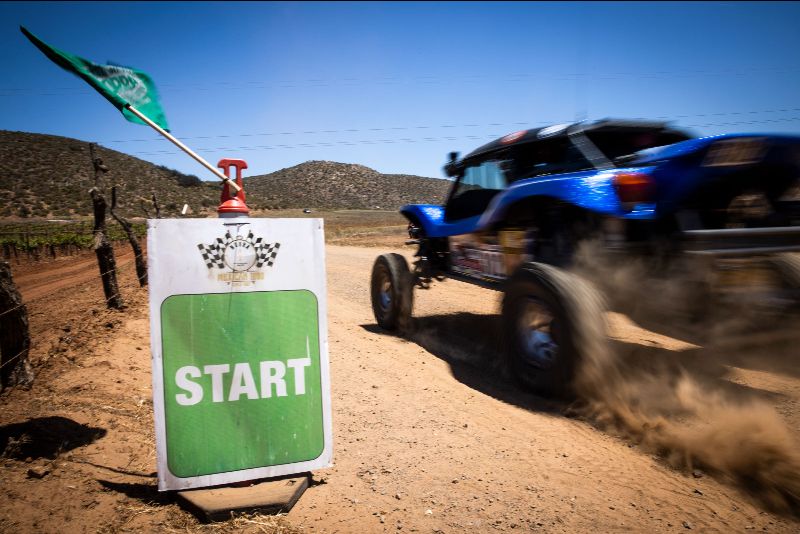 AGUA DULCE, CALIF. – Day one of racing at the Yokohama NORRA Mexican 1000 presented by Method Race Wheels saw many surprises; some pleasant, others came with challenges. Leading off with one of the pleasant surprises was the course. Competitors saw a little bit of everything that Baja has to offer as they made their way from one coast to the other. Fast, slow, twisty, technical, wide open rocky, and sandy with whoops. Even though the terrain was tough, competitors were raring to go, and it showed in the penalty report. All penalties were for being early for stages. This tells us that the racers were really enjoying the speed, and the thrills of racing in Baja again; who can blame them? Taking the first green flag in Santo Tomas, many jumped right on the gas. If anyone was lucky enough to hear “Lightning”  Larry Ragland take off the line you could tell he was digging deep into the throttle on his big V8 power plant. It was such a beautiful noise. 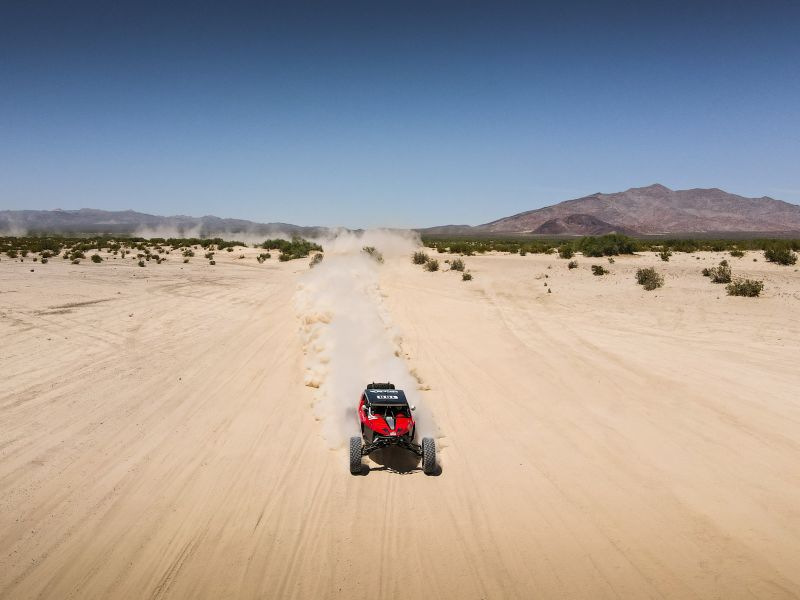 Many were on the gas during day one, including overall leader Troy Johnson. He has brought down fabricators from his Fab School to help any competitor who needs repairs each night. His generosity towards his fellow racers was not extended to the race course. Out there he was throwing down the gauntlet. Troy was lucky 13th off the line, but finished first overall on the day. I’m sure the heavy hitters in his Evolution Unlimited Buggy class have something for him. You just have to look at 2nd overall Rhys Millen in his RMR jackal. He was only 1 minute, 41 seconds off of Johnson’s time. 3rd overall was AHBEEF#41 Justin Lofton; the fastest truck on the day. His Method Race Wheels, Yokohama Tire, Simon & Simon throwback livery looked right at home racing with so many historic vehicles in the Mexican 1000 lineup. 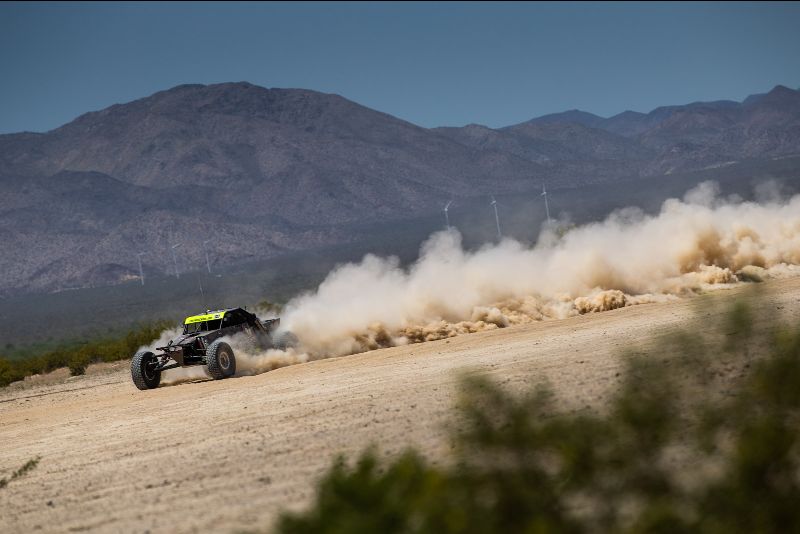 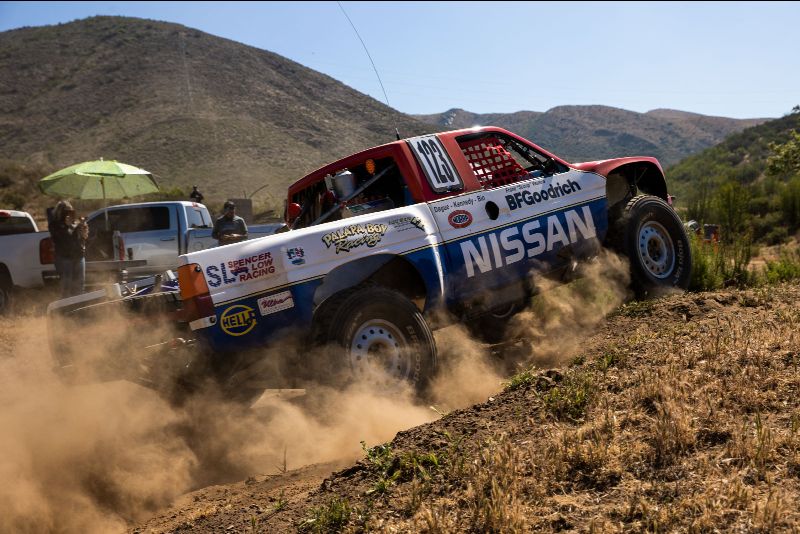 One of the most iconic cars belongs to one of the most iconic racers; Mark McMillin. Mark is our Grand Marshal, but he was not holding a parade today. He drove his Famous “Macadu”  car off the start, and then handed the car to Rory Ward. “The old man still has it,”  said Ward. “He had a nice run to the Mike’s turnoff. I got in and drove it the 41 miles into San Felipe. We started 66th, and finished 35th, but we are just taking it easy; not pushing the car. Macadu is an absolute hoot to drive!” 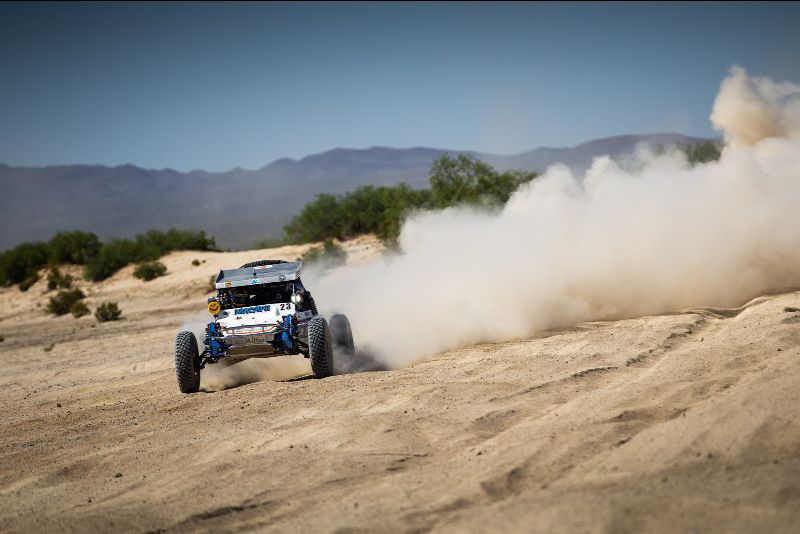 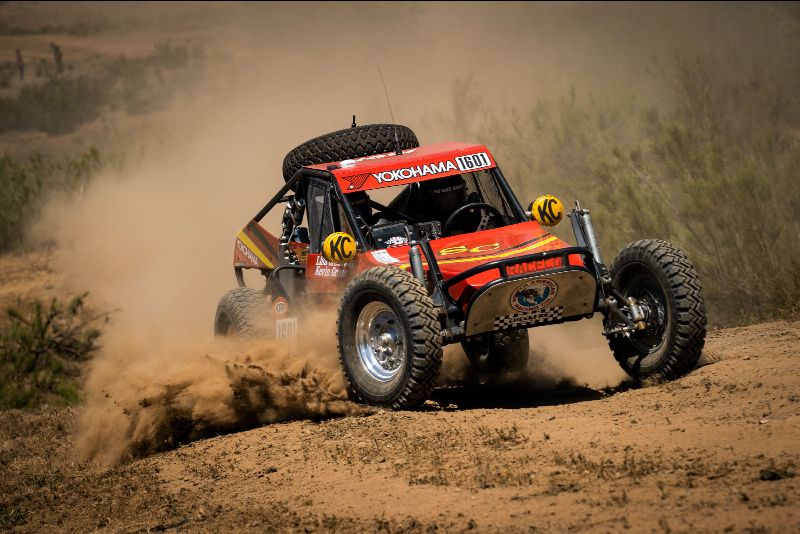 Not everyone had a perfect day. There were some of the typical issues that racers have to deal with. The Vintage Class 11 VW Sedan of Dennis Hollenbeck suffered a rare failure when his fan came apart. He was able to get going again, and made it into San Felipe to fight another day. Richard Bartell in his Vintage 6-cyl Trucks Ford Ranger had a good day until 1 mile from the end where a broken wire to the coil slowed him. Reid Rutherford thought he lost an alternator causing his truck to stall 12 miles from the finish. It turned out to be a broken wire, just like Bartell. Jerry Baker’s Vintage Class 5 VW Baja Bug broke a spring plate but fixed it and finished. Number 339 Dave Moore had a clean run today, but is having a full throttle problem. He says he’s only getting 80 percent throttle. 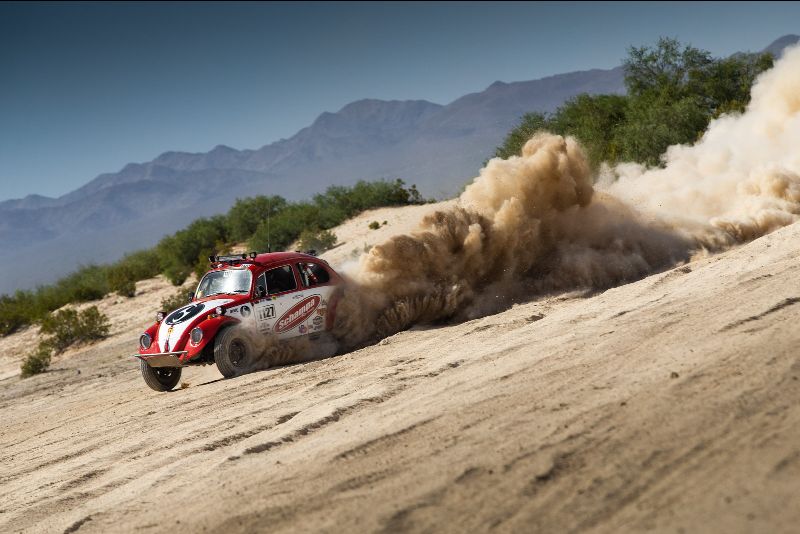 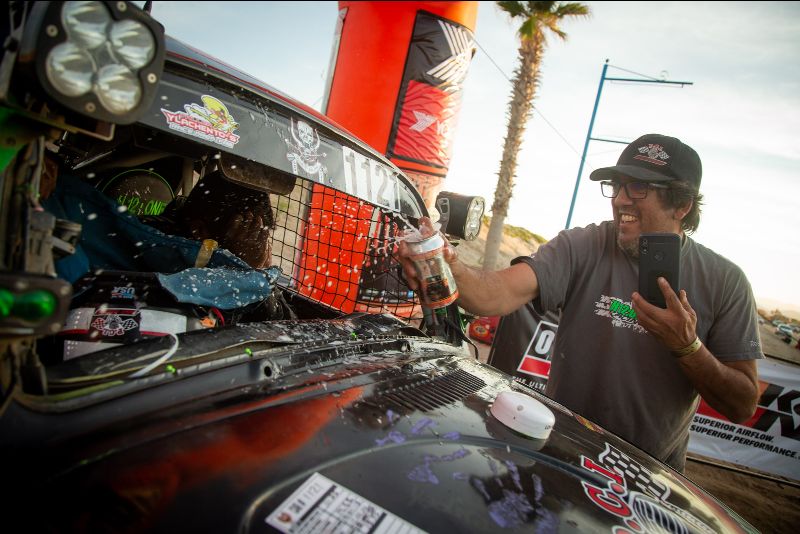 The bikes were on their own course, and the top spots all went to older guys. Of course, age is always relative to oneself. They may all be over 50, but they are obviously way fast! The fastest time went to Giovanni Spinali 50+ Vintage Dudes on a Yamaha YZ450FX. Second fastest was a team effort. That’s right, Kevin, and Michele Busch, also racing in 50+ Vintage Dudes, rode tandem to second fastest. What amazing bike handlers they are. Third fastest overall in 50+ Vintage Dudes class was Charles Harvey on a KTM 450 XCW. Steve Montana in Super Vintage was 4th overall on his super cool Honda XR 500R, and Zachary Smith rounded out the top 5 racing in Modern Open on a Honda XR650R. 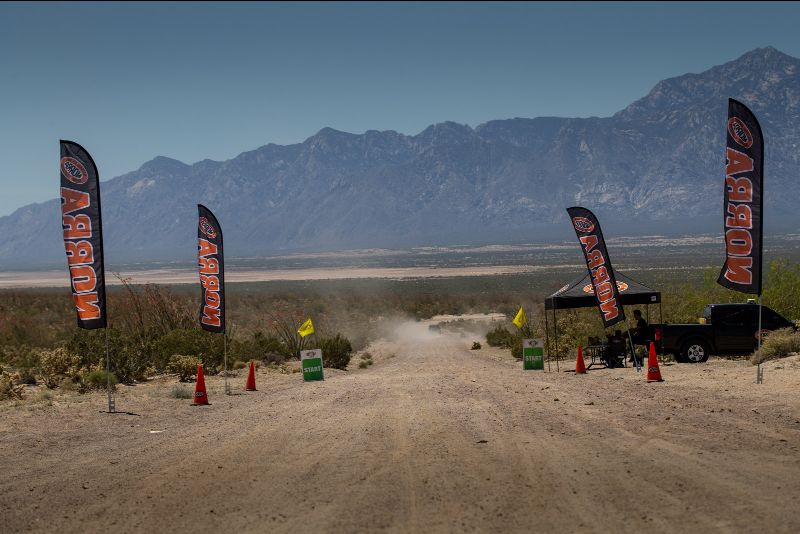 After some cold beers, and tall tales at the Volcon finish line, those who had no problems were free to enjoy San Felipe. Those who had work to do could find solace in knowing they found the weak links, and were able to continue. The goal is to have fun, and get everyone to the finish. So far it’s all going to plan. During day 2, four wheeled racers will be heading down the coast to eventually reach Bahia De Los Angeles, while the Motos go their own way to Guerrero Negro. Both stops Monday Night will have food and drinks at the Slime Finish line. 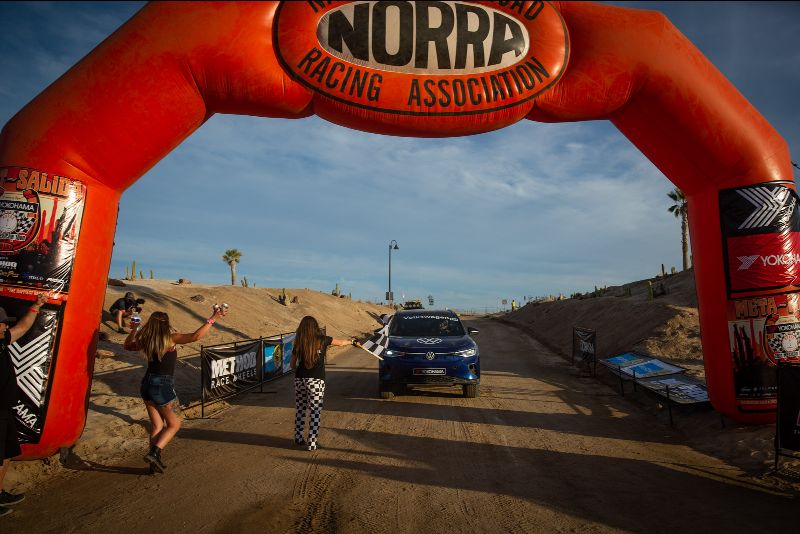 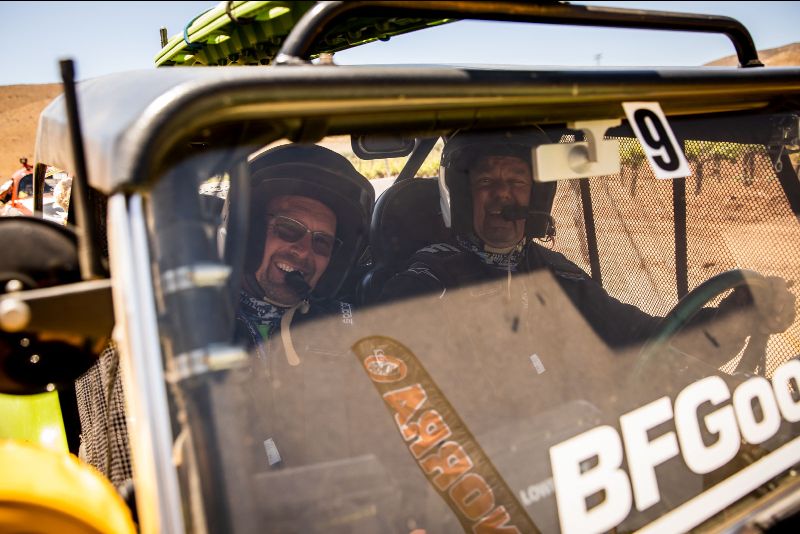 For those at home, STEEL-IT will be uploading photos to social media along with NORRA, and we will provide race updates every day to keep you informed. Just go to NORRA’s facebook page, Instagram, or the NORRA website for the latest news. Be sure to click on the JOIN LIST button on the far right side of the NORRA web page to add your email to the mailing list. 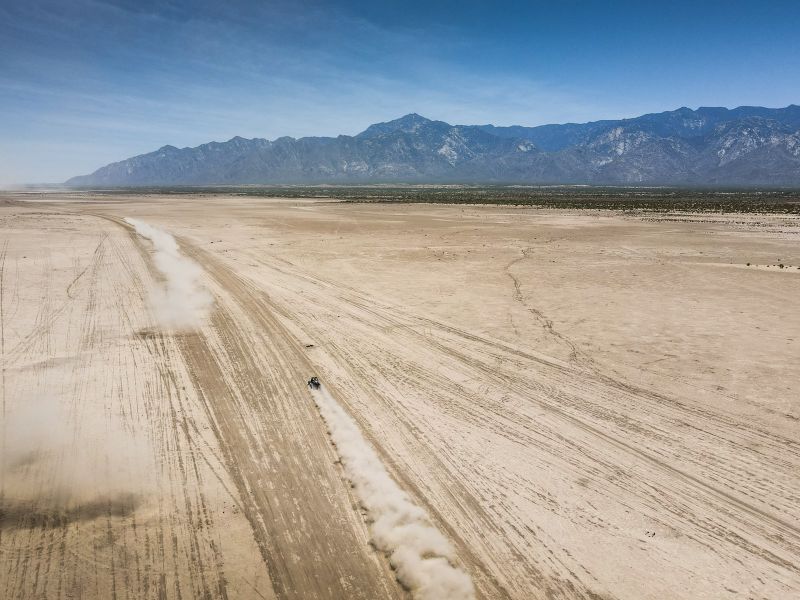