2021 YOKOHAMA NORRA Mexican 1000 Presented By Method Race Wheels Day 3 Of Racing And The Miles Are Adding Up!  Bay of LA ~ Bay of LA 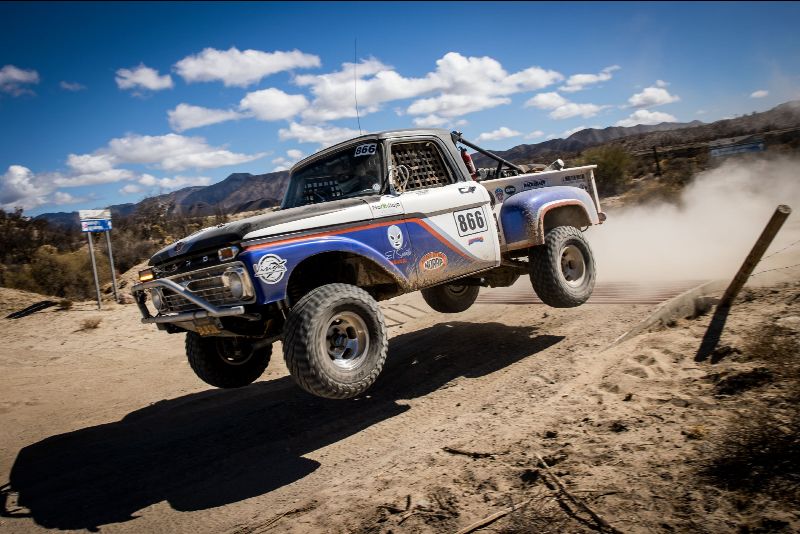 AGUA DULCE, CALIF. – “The Happiest Race On Earth!”  is still a race, and a difficult one at that. Racing in Baja for 5 days straight is no easy task. We often talk about the celebrities, the off road icons, and the current professionals that come down to race, but no matter who shows up, they all have to beat Baja. Sometimes Baja gets the best of them. She is beautiful, and exotic, but she also bites. As the Yokohama NORRA Mexican 1000 Presented by Method Race Wheels passes the halfway point there are some teams who have succumbed to the silt, sand, and rocks along the way. 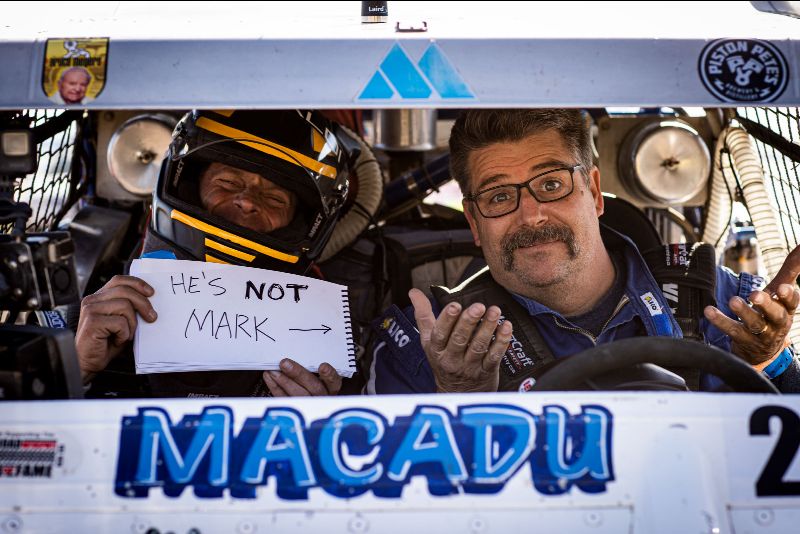 Most of the teams that are out due to mechanical issues are seasoned Baja racers. Both of the Menzies trucks are out, Caballo Del Diablo (Jaynes and Godfrey) lost a transmission, Scott Steinberger lost an engine; Dave Sykes, Perry McNeil, Eli Yee, Jeremy Spirkoff; they all have been sidelined. They are done racing, but they can still party, and have fun. We have our favorite teams that we root for, but Baja plays no favorites. It’s what makes just finishing a huge accomplishment. For those who are patched up, or still running strong, they can begin to see the light at the end of the tunnel. 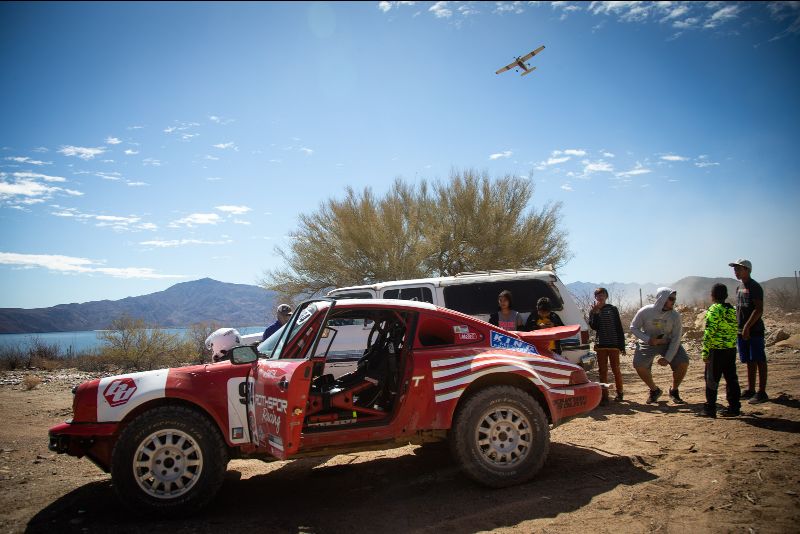 Day three was a combination of fast graded roads, and unmaintained rocky trails for the 4 wheel competitors. Flat tires were suffered by many. The first stage started down the coast from Bahia De Los Angeles, and then turned west towards the Pacific. After 167 miles, it ended in Villa Jesus Maria. From there it continued on a short transit stage of 13.3 miles to La Trinidad. From La Trinidad the second special stage went 63.60 miles to Agua De Higuera. From there it was 13.3 miles of transit back to BOLA. Competitors had to survive 257 miles total; 230 in the dirt. There were a lot of tired, dusty people at the end of the day, but the cold Transpeninsular Cerveza Clara at the STEEL-IT finish line made it all worthwhile. 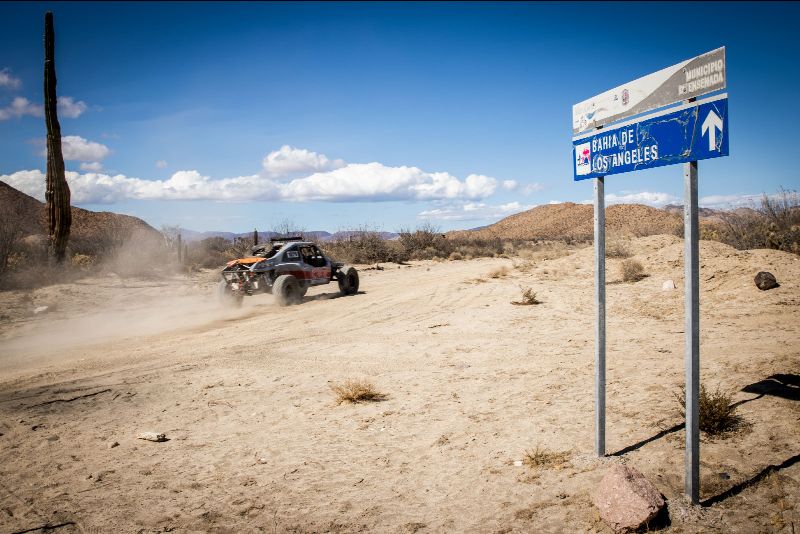 The Motos overnighted after day 2 in Guerrero Negro. They started their day with a 9.7 mile transit stage to Villa Jesus Maria. From there they ran a special stage of 130 miles to Palo Chino, then a transit to Bahia De Los Angeles. It was a relatively short course of only 162 miles, but day 2 was a punishing 333.8 miles long; 254 miles were at speed, so they earned it. Unlike the cars, the bikes are still running strong, but there has been movement in the standings. We didn’t get results after day 2, but as it looks now, Giovanni Spinali has dropped back to 11th overall. That puts the Buschs, Kevin, and Michele in the lead overall. It’s frankly amazing that they can ride so fast with 2 on the bike. The rest of the top five include Charles Harvey 2nd on a KTM, in 3rd place Steve Montana on his Honda XR 500R, Micah Smith running 4th on a Honda XR650R, and Michael Georgeson on a Beta RRS. That’s a diverse bunch of riders all vying for the top spot. 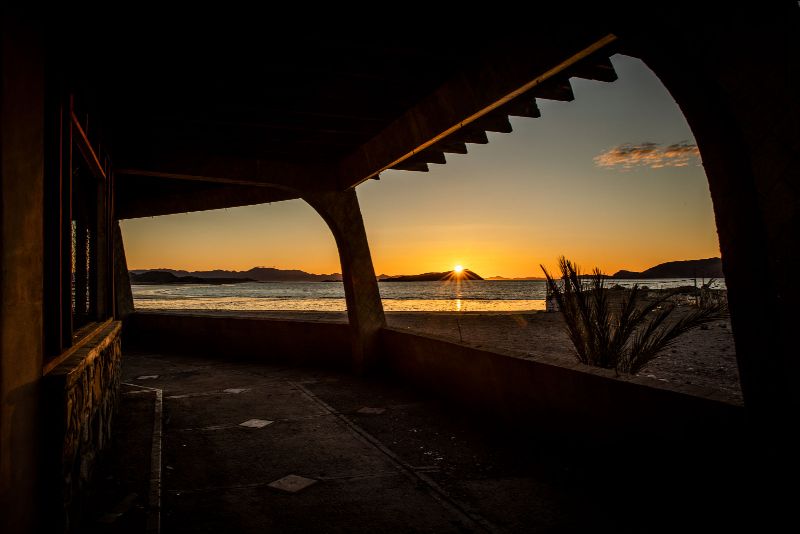 Top spots overall for the cars are as follows; Justin Lofton is still on top, followed by Gay Smith. These are 2 experienced racers in unlimited vehicles. They will be hard to beat, but we’ve already seen that nothing is a given. Rhys Millen is 3rd, and 4th place is now held by Dallas Luttrell who has the speed to take it all. John Langley has moved into 5th, and early leader Troy Johnson is 6th. Seventh place is Larry Ragland, followed by Mike Lund. How would you like that pair breathing down your neck? Andres Ruffo is 9th, and none other than Bill Hernquist holds the 10th spot in his Baja Bug. There is quite a battle going on with the Baja bugs this year. Hernquist is 10th, Hap Kellogg is 13th overall, and Art Eugenio is 17th overall. Not bad for a professional photographer and only part-time racer. 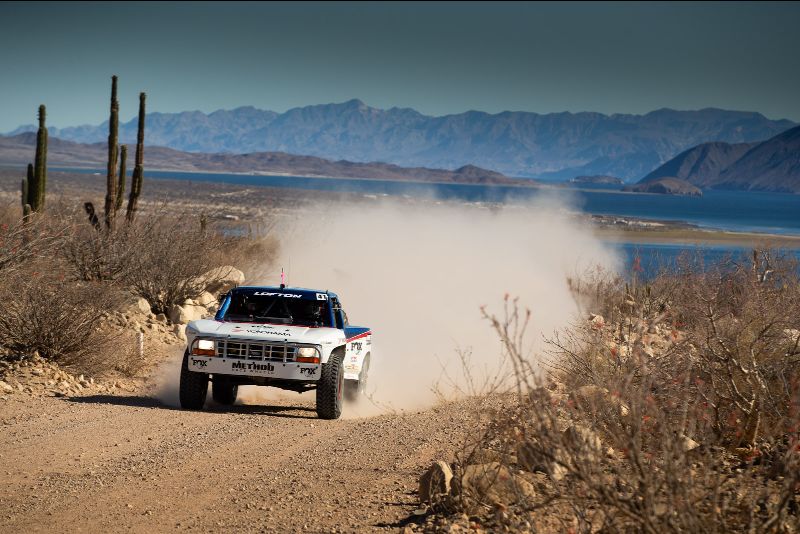 Day 4 will be a beautiful trip up the coast for everyone from Bahia De Los Angeles to San Felipe. The scenery is going to be epic, but drivers, and riders still need to be wary. It’s still a long day at 246.8 miles total, and lots of racing is still to be done. Be sure to follow along as the competitors head back North. We will provide race updates every day to keep you informed. Just go to NORRA’s facebook page, Instagram, or the NORRA website for the latest news. Be sure to click on the JOIN LIST button on the far right side of the NORRA web page to add your email to the mailing list.