San Felipe is always a brutal race, but the King Shocks 35th SCORE San Felipe 250 was on a whole new level. It’s not often when you get more than you paid for, but SCORE gave racers 277 miles of rocks, ruts, and endless whoops; all for the price of a 250 miler. 4WP Polaris racer Craig Scanlon described it perfectly; “if you weren’t hitting a rock, you were hitting a whoop.” It all started during qualifying when the fastest and most capable vehicles in off road racing rolled, and got stuck in the deep sand on the qualifying course. Even the G.O.A.T, Rob Mac got stuck trying to avoid Steve Strobel (also stuck) on the reconnaissance lap. Alan Ampudia hit a nasty ditch during the reconnaissance lap causing him to roll; then broke his steering on a hard landing during his qualifying attempt and rolled again. It was amazing that he was still able to start the race 2 days later, and finish in 7th place. The qualifying course favored the four wheel drive trucks and the results showed it. Bryce Menzies was on the pole. Justin Lofton was second, and Luke McMillin 3rd; all driving Mason four wheel drive trucks as was Andy McMillin 4th, and Dan McMillin 5th. Cole Potts would start 6th in the Huseman built four wheel drive Trophy Truck. 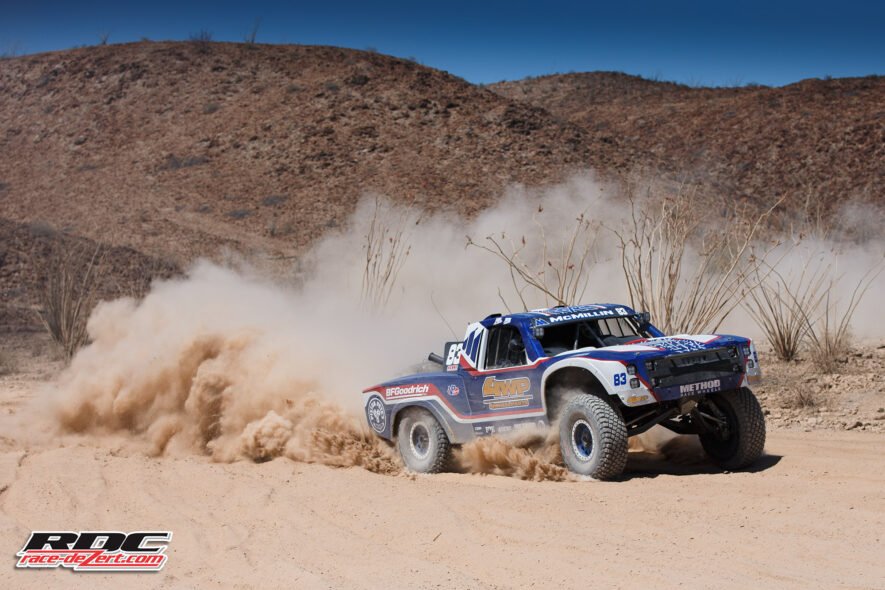 After an early morning start on Saturday, Bolivian rider, Juan Carlos Salvatierra was the first bike across the line riding the 10x KTM. Fellow KTM racer Jano Montoya finished 2nd overall almost two and a half minutes later. Salvatierra also took the Pro Moto Unlimited class win. Montoya took the victory in the Pro Moto 30 class. Mexicali racer Luis Ernesto Villafana won the Pro Quad class on his Honda. Jason Alosi was second in Pro Moto Unlimited on his Husqvarna, and Honda rider Derek Ausserbauer was third. Nobody worked harder than the team of Brayan Alonso from Rialto, CA. They physically pushed their Honda for 12 miles to get to the finish line in the Sportsman Quad class finishing in just over 12 hours. 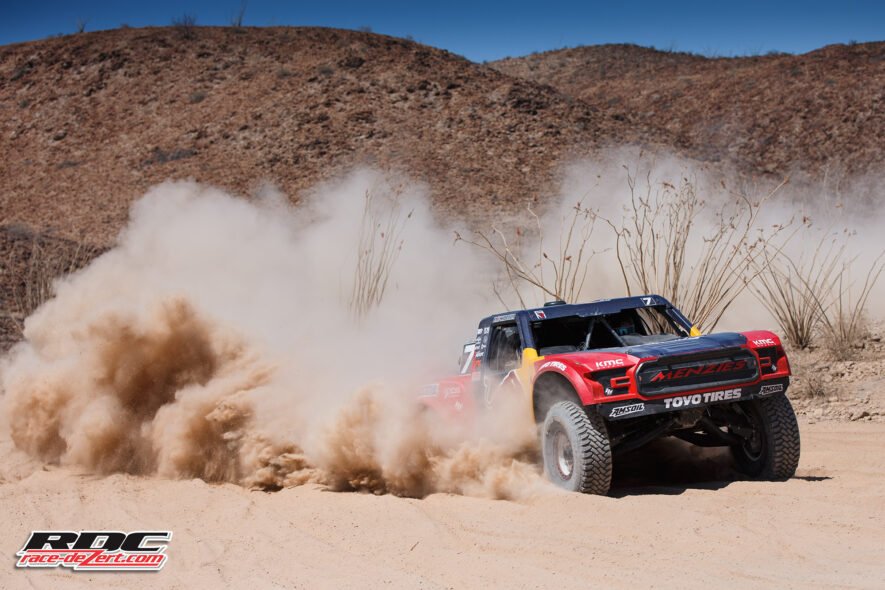 The Trophy Trucks left the line at 10:00 am. Anytime the Red Bull number 7 starts on the pole, the race becomes a matter of who can catch Bryce Menzies. He would have a huge field of similarly capable Mason trucks breathing down his back; most of them driven by McMillin’s. Despite how rough the course was, everyone had the same game plan; go all out, and see who survives. No wonder several crashes happened in the first quarter of the race. One that was quick to see internet fame was King of the Hammers Ultra 4 winner Raul Gomez. He was coming up fast on a set of deep ditches when he made a perfect blip of the throttle to clear the first one. Then he got a little kick on the second one, and dug his front bumper into the face of the third to send him end over end. It’s always the third one that gets you. He lost a lot of time, but his crew got him back on course and spoiler alert, he finished 15th. 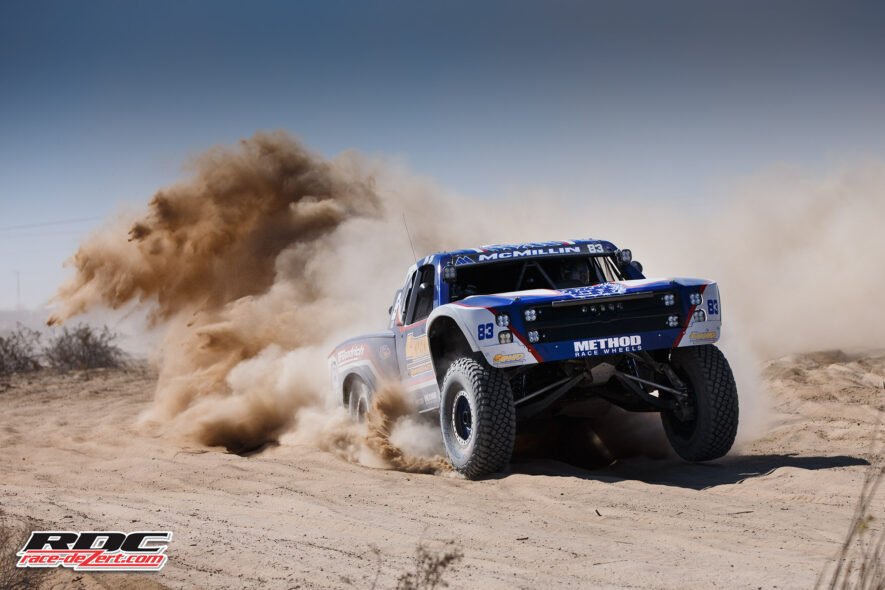 Also seen in the early going were a few engine failures. Justin Lofton lost a motor on the dry lake bed. Cameron Steele was also reported as losing an engine. It became clear that nobody was backing off the pace. In the first half of the race it was a freight train at the front, but soon a pack of trucks clearly put a slight gap on the field. Luke McMillin and Bryce Menzies were swapping the physical lead. Luke Passed Bryce when he exploded a tire on the lake bed. Then Bryce got him back when Luke pitted. Dan McMillin was running 3rd, and Cousin Andy 4th. Andy had to stop for repairs because a strap holding his tires on the back broke, and he lost both spares. With all the rocks in remote washes that lay ahead, not having a spare tire could end your day. He managed to get fresh rubber and charged his way back up to the lead pack. At one point, it looked like it might be a McMillin sweep of the podium as Luke was out front, and Dan and Andy were close to Bryce Menzies on corrected time. That’s when bad luck hit both McMillin teams nearly simultaneously. Andy lost a transmission, and then Dan suffered the same fate only a few miles later. Both made repairs and finished the race. Starting positions for the 500 were based on finishing positions in San Felipe so a DNF (did not finish) was not an option.

With the two McMillin teams making repairs, it opened the door for Mike Walser, Rob MacCachren, and Tim Herbst to be in contention for a podium. Walser took the start of the race, and then handed off to Jax Redline. Their truck is fast, and neither is shy about pushing it. Since Luke started 3rd, all he had to do was stay ahead of Bryce to take the win, and that’s what he did. Bryce finished nearly on his bumper, but he would have had to pass Luke, and put 2 minutes on him and that wasn’t going to happen. Luke’s victory was made even sweeter as it was BF Goodrich’s 100th Baja victory, and McMillin racing has been with them for a very long time. Bryce was second, and shared that he had 4 flat tires on the day (Luke had two). When you are pushing that hard, something has to give. Jax Redline crossed the line 3rd. Mike Walser was there and gave Jax a hard time for getting their only flat of the day. Jax said he came around a corner, and saw a log laying in the course a little too late. It makes you wonder who hit that ahead of him. In fourth place it was the first two wheel drive truck to finish; Rob MacCachren. Rob said they were trying to be smooth, but pushing very hard all day. Rounding out the top five to cross the line was the number 19 Terrible Herbst truck. Pat Dean drove the first half of the course, and then Tim Herbst got in and brought it home. They lost a driveshaft, but made repairs and finished with no flats. 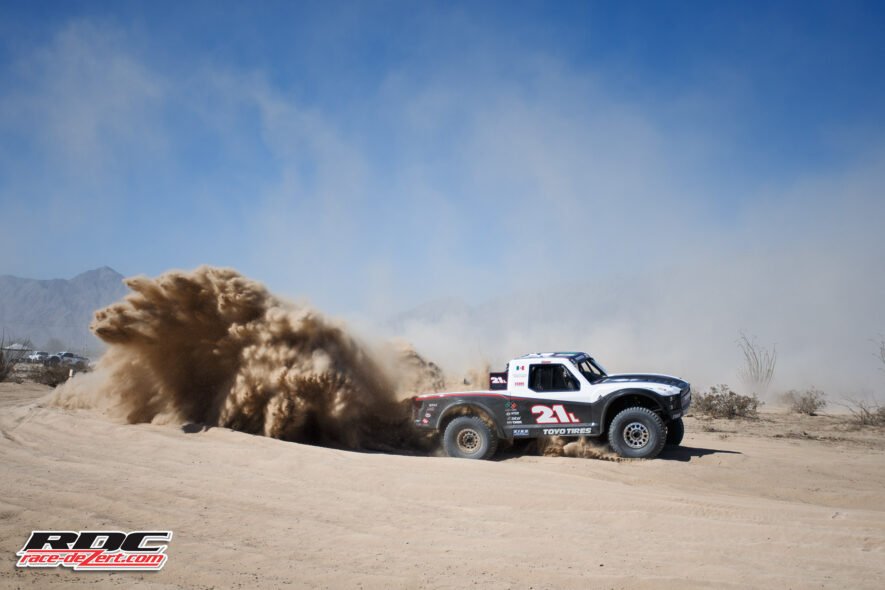 Not only did Mason Motorsports take the top 3 spots in Trophy Truck, but also the top two in TT legends class. Gustavo Vildosola Sr. was first to cross the line with Rolf Helland 2nd. It was a big day for people named Rick Johnson. MX legend Ricky Johnson took the start for Vildosola in the 21L, and Rick D Johnson took a stint with son Ricky Johnson navigating in Rolf Helland’s 37L truck. 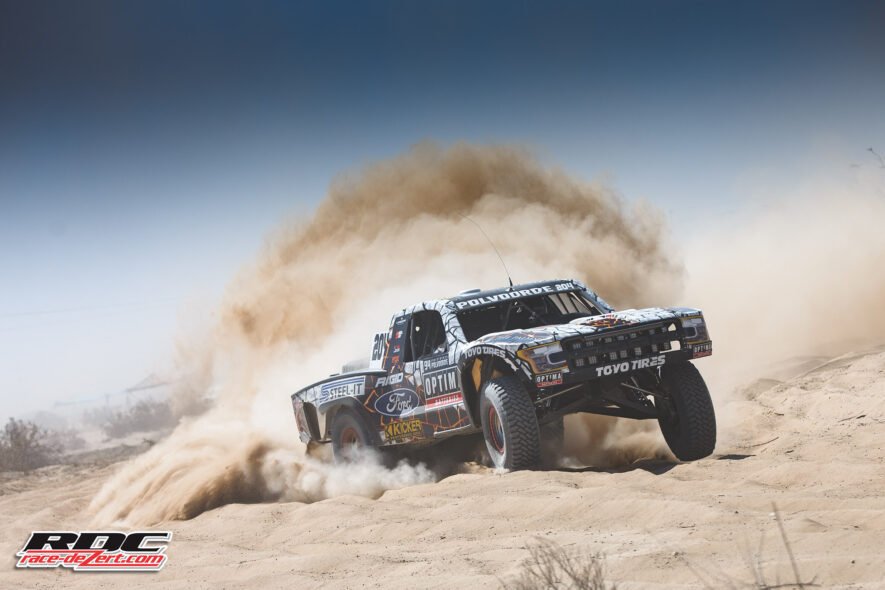 The fastest trucks up front had a tough race, but those who were on course after they tore the hell out of it would earn their finish even more. Coming into the home stretch, Christopher Polvoorde was the first Spec TT on the road, but Christian Sourapas was leading on corrected time. In a cruel twist of fate, Sourapas broke at mile 260. He was the fastest TT Spec truck to finish 250 miles, but the course was 277 miles long. Polvoorde took the top spot with Jason Coleman crossing the line second. Sourapas’s heartbreak was a reminder that nothing could be taken for granted on this course. Many racers stated that there was no place the entire way to take a break or catch your breath. It was 100 percent commitment. One competitor said the only way to slow down enough to save the car was if you weren’t moving. 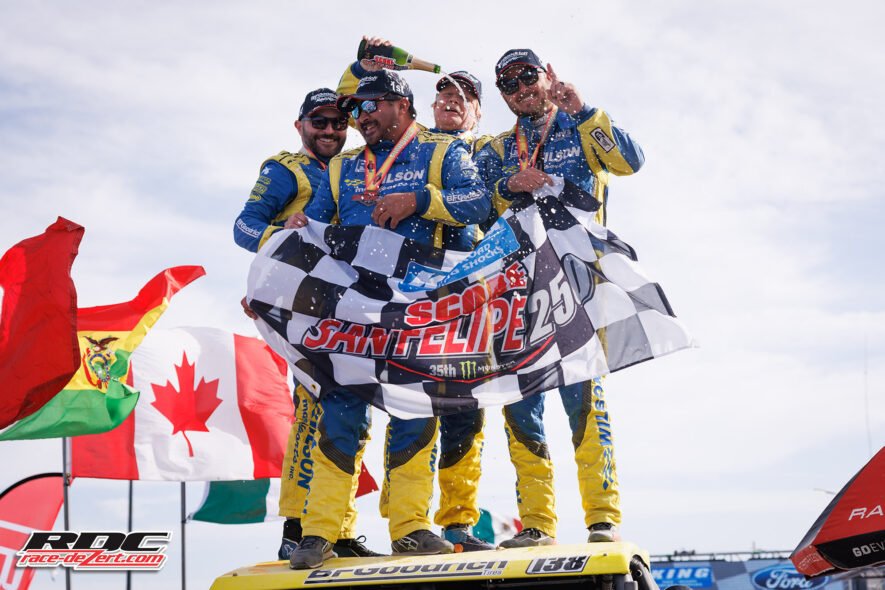 Class one was another hard fought battle until the very end. Conner McMullen had his Alumi Craft out front after taking the pole, but when the dust settled Kyle Quinn finished first with Ronny Wilson in the car at the checkered flag. Ronny said he got into the Jimco in 2nd place but then they lost an alternator. They dropped back to 4th place, but he hammered the car the last 50 miles to take the win. Brian Wilson will be back behind the wheel at the 500; we can’t wait to see what these second generation racers at Wilson Motorsports will accomplish this season. Speaking of second generation drivers, a couple third generation drivers made it to the finish in TT spec class. Despite growing up racing in Baja with his family, it was the first time behind the wheel for EJ Herbst. He finished 8th, and said he can’t wait for the 500. Pierce Herbst also had a good run. He didn’t complete his qualifying lap so he started last, but finished on the podium in 3rd place when it mattered. 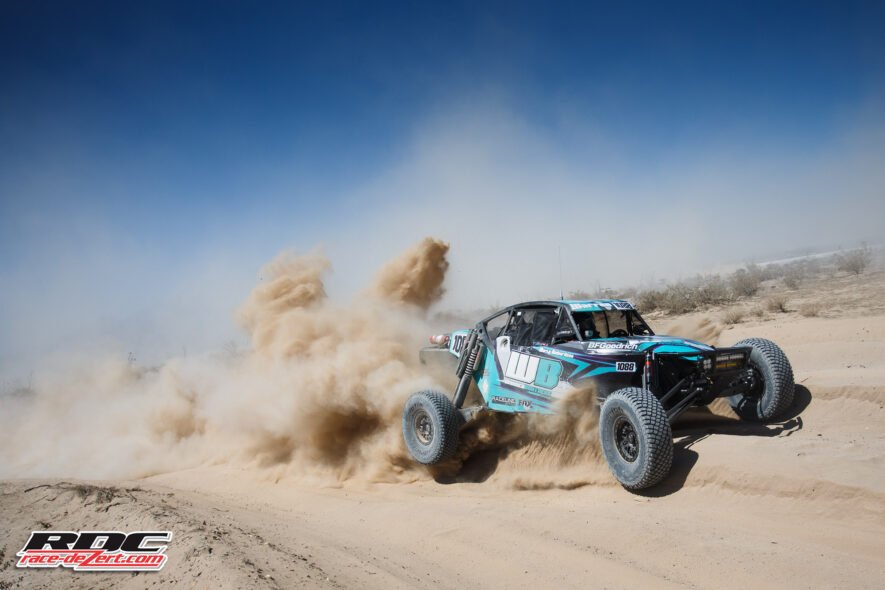 In class 10 Chase Warren took another victory. He said it was a long hard day. He started second to last, but was first on the road by the half way point. It was his third San Felipe win in a row, and 4th win out of five. Ivan Tagle crossed the line second; he said his day was perfect, and trouble free, but he had an enormous dent in his front a-arm. He must have hit something large, and solid, but his Alumi Craft shrugged it off. Ben Hagle finished third. 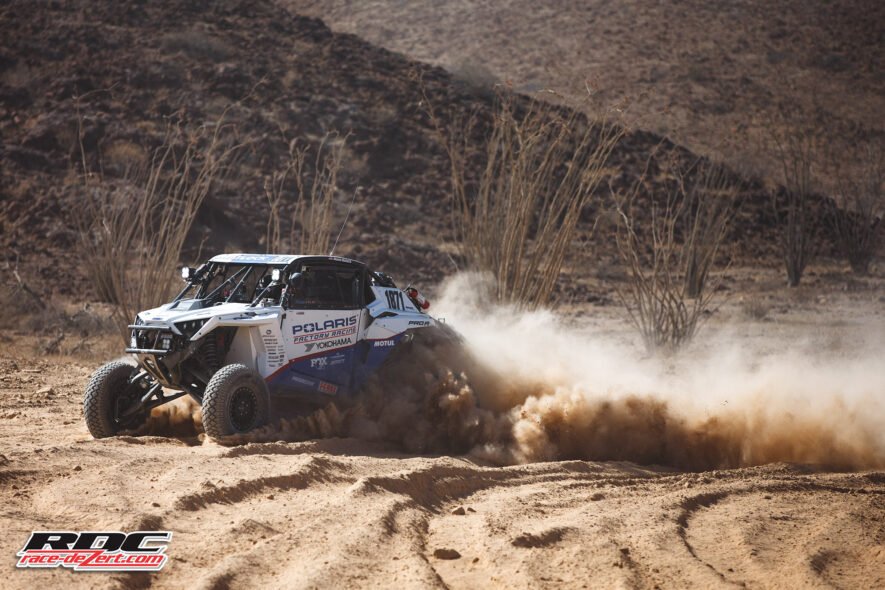 At one point you could have thrown a blanket over Edgar Garcia, PJ Jones, and Oscar Arambula in the UTV Forced induction class. Justin Lambert was out front all day, and hoping to get the win; which he did. Wayne Matlock was out front all day too in the Pro UTV Open class. The open class started behind the turbo cars, but Matlock ran fast enough to take the UTV overall time in his Pro R over Justin Lambert by around 3 minutes. Joe and Austin Bolton won Pro UTV NA. 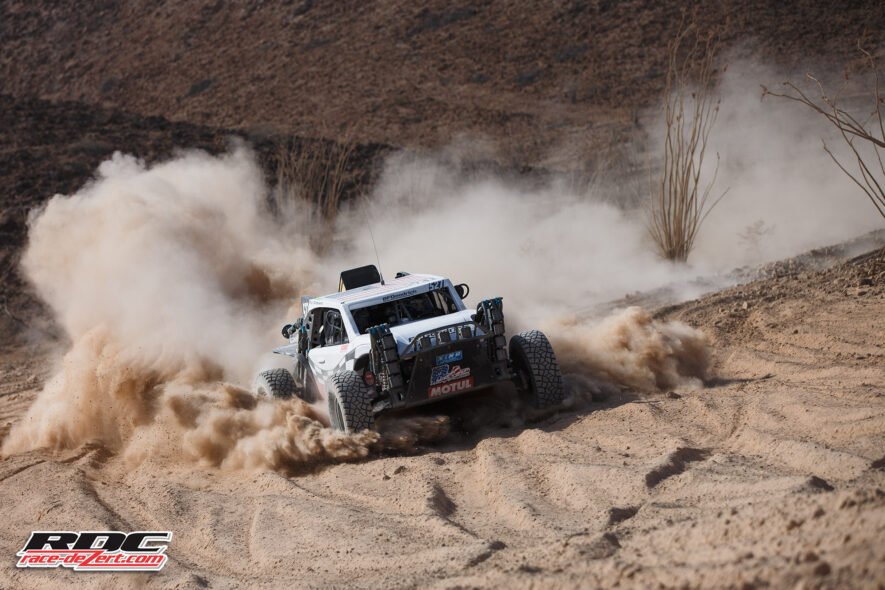 In class 5, Jack Grabowski took a commanding victory over second place; winning by over an hour. He said they put their hearts and souls into it. That’s what it takes to win. Jose Enrique Gutierrez came out on top in Class 5 1600. Fernando Prado took the victory in everyone’s favorite; class 11. The stock VW beetle class had a full podium; three class 11’s finished in time. Congratulations to Hector Sarabia in second, and Arthur Penner in third.

SCORE International is pushing racers to compete on the toughest courses ever. Not only is the terrain brutal, but the mileage is more than advertised. Veteran Rob MacCachren said they went through stuff that he has never seen before; which says a lot. With so many advancements made in tire technology, shock design, engine performance, and chassis manufacturing, it will be interesting how the sport will evolve going forward. One thing is certain, SCORE is challenging teams, component manufacturers, and vehicle builders like nobody else.