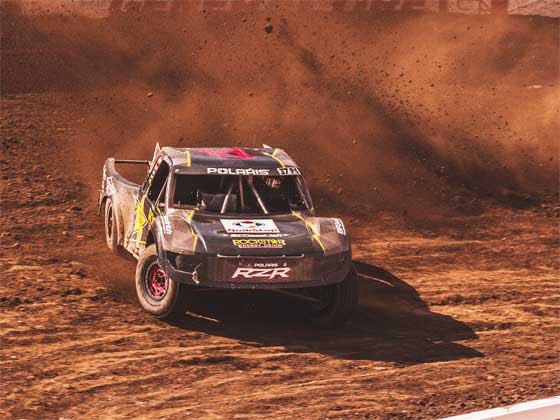 Wheatland, MO— 2017 marked two firsts in the Lucas Off Road Racing Series. First, RJ Anderson launched his rookie season with the big guns in Pro 4. Second, In RJ’s vehicle, the very first 4WD Albins ST6 sequential gearbox made its Pro 4 debut. Though RJ has amassed an impressive list of results including the 2015 LOORS Pro Lite Championship, entering the Pro 4 field is a daunting endeavor.

Despite the heavy weight competition, RJ and the ST6 earned impressive results in their rookie season including a podium in Utah and a win in Reno. The sequential shifting ST6, which features easily changed drop gears, inspection ports, and torque limiting wet clutch was a perfect fit for the RJ37 Pro 4 vehicle. The flexible new 4WD ST6 can be run with a clutch, a  torque converter or a combination of the two. The rear drive can be offset with the front drive or in the traditional crank centerline location. The 2018 LOORS Pro 4 season has been off to a great start. Although a win has eluded RJ, his consistency to find a spot  on the podium has made him the LOORS Pro 4 points leader so far this season. Last weekend, RJ and the ST6 snagged another second in Saturday’s race at the Geico Shootout in Wheatland, Missouri.

Douglas and Albins ST6 snag a Pro 4 win. Although the Sunday’s race at Wheatland was marred by rain, it delivered a great result. Former TORC competitor and LOORS newcomer Scot Douglas earned a huge win over the Pro 4 field in Missouri. Douglas’ number 27 vehicle features the second 4WD Albins ST6. ​​The Albins ST6 is a 6-speed sequential racing gearbox that couples lightning fast shifts with brute strength. The ST6 features six close-ratio forward gears and a heavy duty drop gear set to reduce the overall final drive ratio. This enables the use of taller (and stronger) ring and pinion ratios.

The entire ST6 line features profile-ground gears that are shot peened and isotropic polished. Inspection ports make routine inspection easy without dis-assembly. Internal oil pumps are standard. The ST6-i features two possible heights for power input, clutch and converter options, plus a wide selection of drop gears that allow the ST6-i to be easily tailored to your specific application.