A bittersweet day for Honda 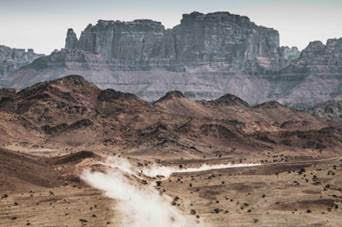 Welcome to a different world. Over hundreds of thousands of years, geological processes fashion rocks into gargantuan sculptures with shapes that can be familiar or, on the contrary, rather psychedelic: a mushroom here, a mammoth there, over there a tulip, a pyramid or a Greek colony… In this surrealist landscape, the competitors’ main concern was navigating. Not everyone enjoyed this exercise, including Sam Sunderland, who came close to losing his podium spot. If he managed to keep, it was only thanks to the setback suffered by Nacho Cornejo, whose hopes of victory were dashed just as the rally came within a hundred kilometres or so of the millennia-old Nabataean funerary monuments for which AlUla is famous. 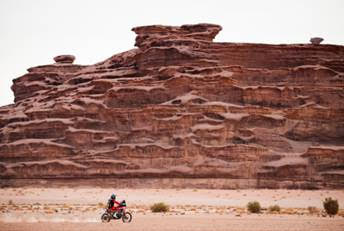 No-one expected this to turn into a game of survival. The four Honda riders surrounding Sam Sunderland in the top 5 of the general standings had no need to set an infernal pace to keep a lid on the race. In fact, no-one can accuse them of being reckless in today’s stage… but Nacho Cornejo ended up crashing 252 km into the special anyway (see A crushing blow). The Chilean was evacuated from the race 90 kilometres down the road, at the finish of the special that Ricky Brabec won at the same time as he rocketed up to second place overall (see Performance of the day). It is hard to look past the reigning champion and his teammate Kevin Benavides, now leading the rally by 1′04″, in the fight for the title. Meanwhile, in the car category, the latest duel between Stéphane Peterhansel and Nasser Al Attiyah did not lead to major changes, as the 49″ lost by the Mini driver barely made a dent in his lead ahead of an even more vicious battle tomorrow. Yazeed Al-Rajhi pounced on the opportunity to take another stage win as a consolation prize for not being able to challenge for the title. Pablo Copetti left the opposition in the dust in the quad category, but he remains in fourth place overall with clear daylight between him and leader Manuel Andújar. “Chaleco” López was also unfazed by Sergey Karyakin’s victory in the lightweight vehicle category, but he would do well to keep a close eye on fellow Can-Am driver Austin Jones at 10′13″. 24 hours after claiming his maiden stage, Martin Macík made it two in a row with a new triumph over the Kamaz drivers, but without loosening their iron grip on the general standings.

It is no coincidence that Ricky Brabec is the defending champion! The American reached the rest day stuck in the doldrums, almost 20 minutes behind the leader, but his reaction has been swift and spectacular. He won the first part of the marathon stage and has since finished every stage on the podium. The Honda rider continued to make up time as his main rivals, including Xavier De Soultrait, Toby Price and Nacho Cornejo, made fatal mistakes. Brabec’s win in stage 10, combined with Kevin Benavides’s mediocre performance in the same special, bring the American within one minute of his stablemate in the general standings. Tomorrow, Brabec will face the challenge of opening the longest stage in this year’s edition… but he already acquitted himself brilliantly today by opening the way after overtaking Benavides.

Nacho Cornejo’s supporters in Chile were probably already preparing to celebrate. Their hero seemed poised to win the Dakar at the young age of 26 and was heading into the final stages with a margin of 11 minutes and a calm, collected approach that pre-empted unnecessary risks. Even after his crash, the folks in Iquique must have breathed a sigh of relief when they saw their boy jump right back on his bike. However, it all went downhill from there. First, the effects of the crash slowed Cornejo down to the point that he surrendered the lead and faced a vicious high-stakes battle in the last two stages. Shortly after, the Honda rider was forced to withdraw from the race due to a concussion that required close surveillance and in-depth examinations. Leaving his fifth Dakar in a helicopter is probably not what he was expecting. 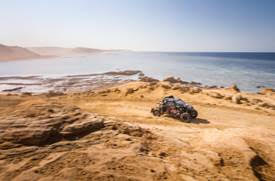 Although Sergey Karyakin finished as runner-up to Casey Currie last year, the Russian had not won a stage in the Dakar stage since 2019. Today’s victory made Karyakin the seventh stage winner of this year’s edition in the lightweight vehicle category. The 2021 edition was a bumper crop for records, including the first woman to win a stage since 2005, Cristina Gutiérrez, and the youngest ever Dakar stage winner, 18-year-old Seth Quintero. Not to mention Kris Meeke, who like the Red Bull Off-road Team duo is also making his lightweight vehicle debut. Three rookie stage winners make this the most open category of the rally… and who knows what the last two stages will bring! 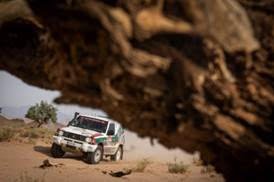 Juan Donatiu and Pere Serrat Puig entered the race in a Mitsubishi Montero used in the 2005 Dakar by Julia and Beatriz García, the only all-female crew in that year’s edition, who ended up completely lost in Mauritania. This time round, the Spanish duo have turned in an almost flawless performance so far and currently sit in second place overall in the Dakar Classic regularity race. 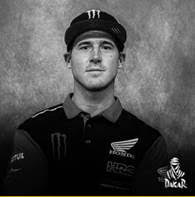 Ricky Brabec: “We all know we all wanna win. Winning is the best thing there is in life“
The reigning champion moved up to second place overall thanks to his third win (including the prologue) and Nacho Cornejo’s crash.