A day for the desert foxes 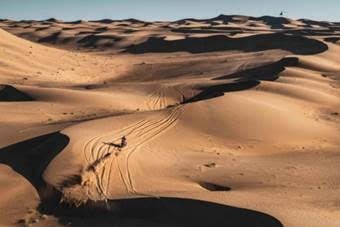 The change in landscape is striking on leaving Bisha to head to the west of the country, towards Wadi Ad-Dawasir. Gone are the stony tracks that tested the competitors’ nerves and tyres. This time, sandy plateaux played host to the first part of the special, before the riders and drivers had to put their skills in the dunes to the forefront. They had to be experts in this delicate art in order to tackle those on the final section, with dunes broken up by the wind that has generously gusted over the region during the last few days. It was therefore not surprising that past-masters in sand such as Nasser Al-Attiyah in the car category or Joan Barreda in the bike race proved to be the quickest in this exercise. 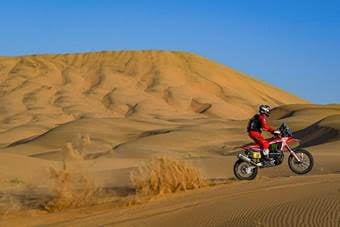 On the second day of racing, the riders and drivers sometimes hold back a little, meaning positions do not often change much. Such an approach is not part of Joan Barreda’s DNA who, on the contrary, has all too often shone on the first week of the rally at the risk of disappearing from the standings prematurely. After starting in 20th position, the Spaniard convincingly overtook the pack of bikers as the day’s openers paid dearly for their hesitation in the dunes: Toby Price and Kevin Benavides both lost half an hour, Mathias Walkner waved goodbye to 2 hours 30 and Andrew Short exited the race, let down by his machine. As for Nasser Al-Attiyah, he added a 37th special stage win to his collection, deploying a strategically precise plan, even if Stéphane Peterhansel took over the reins at the top of the general standings. A pitched battle is taking place in the lightweight vehicle category, in which a new player emerged among the pretenders to the crown: behind the wheel of his Can-Am, Saleh Al Sahif became the second Saudi stage winner on the Dakar, six years after Yazeed Al-Rajhi triumphed in the Chilean dunes around Iquique. In the truck race, it appears that Dmitri Sotnikov is initially taking on the role of team leader for Kamaz. He won a second consecutive stage and now leads the general standings by 17 minutes ahead of Belarussian Sarhei Viazovich.

Pablo Copetti distinguished himself with a flourish on the second stage between Bisha and Wadi Ad-Dawasir. The Americano-Argentinean, who missed out on the 2020 edition several days before travelling to the rally due to an injury, today made an elite level comeback. It was from the 178-km point that he started to distance his rivals and soar away to a fourth stage victory, his first since the 2017 edition. Over the last months, Copetti has not hesitated to draw on the best resources to fine-tune his Yamaha Raptor 700 and ride during lockdown in the deserts of Nevada and California. His preparation has been far from conventional, but it is bearing plenty of fruit!

After the third best time on the first stage, Matthias Walkner was intent on following the pace of his team-mate Toby Price on the special heading to Wadi Ad-Dawasir. However, a clutch problem put paid to these plans after he got stuck in a dune shortly after reaching the 46 km point. Forced to stop and repair his machine, this manoeuvre cost the Austrian more than 2 hours in lost time. Despite all that, he managed to reach the finishing line and, even though he will try to claw back the time lost over the next few days, it looks like he has lost any hope of regaining the title that he won in 2018. It is likely that KTM has lost one of its major assets in the quest to regain its crown. Although the gaps are still small, the entire team will not be happy because it does not have a representative in the top 10 of the general standings. Sam Sunderland, in 12th place, trails Barreda by 12’50’’.

Stat’ of the day

The figures are irrefutable: Joan Barreda has won as many special stages as Marc Coma in his career on the Dakar. Since his first stage victory in 2012, “Bang-Bang” has let his speed do the talking on all types of special and today has even overtaken Hubert Auriol in terms of his stage victory collection. However, the Honda rider has always found consistency problematic and has never finished higher than 5th place in the final general standings. His profile is similar to his countryman Jordi Arcarons, who triumphed on 27 stages without ever having won the overall title, but Barreda has not had his last word yet! 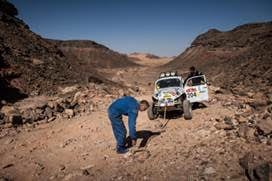 The participants in the Dakar Classic have also experienced their fair share of incidents, but the Beetle driven by Belgians Benoît Callewaert and Ghislain Morel safely reached the bivouac in Wadi, in 17th place on the day’s special 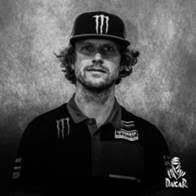 Adrien Van Beveren:
“I started with the idea of trying to win the stage”

The Yamaha rider was comfortable on this sandy stage and reacquainted himself with good riding sensations to post the 6th best time of the day, to celebrate his 30th birthday.

“It was a nice day. It’s my birthday – I’m thirty today – so I started with the idea of trying to win the stage. I was really fast on the first section, but then I got caught up in some dust with some riders and it took time to pass them on the tracks. My team-mate Ross came back really fast, then I saw at the refuelling point that Barreda was also there, so I decided to… I wouldn’t say to slow down, but to make sure I navigated perfectly and be safe to the end, so it was a good day”.