An exciting thing about offroad racing is the unexpected and this last weekend out in Laughlin Nevada showed just that.

The 2020 King Shocks BITD Laughlin Desert Challenge was held Thursday through Sunday and what started out as nice weather for qualifying and tech quickly did a 180 degree turn for the races. Friday night the forecast called for rain but what came wasn’t expected. 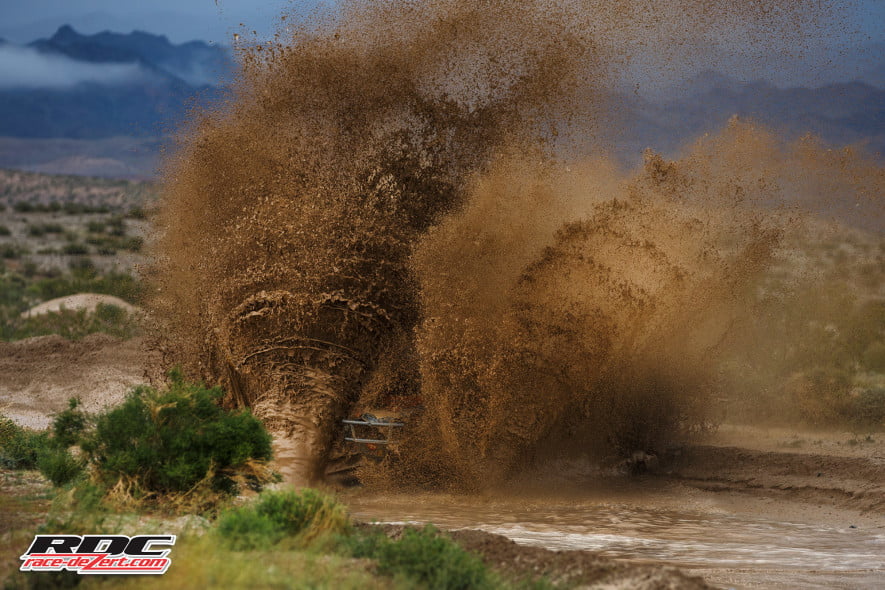 What was a dry course before the first race quickly turned into chaos as a downpour drenched the entire race course. Every turn, every whoop had water in it and the meadow outside the start finish line had ponds of water all around it. 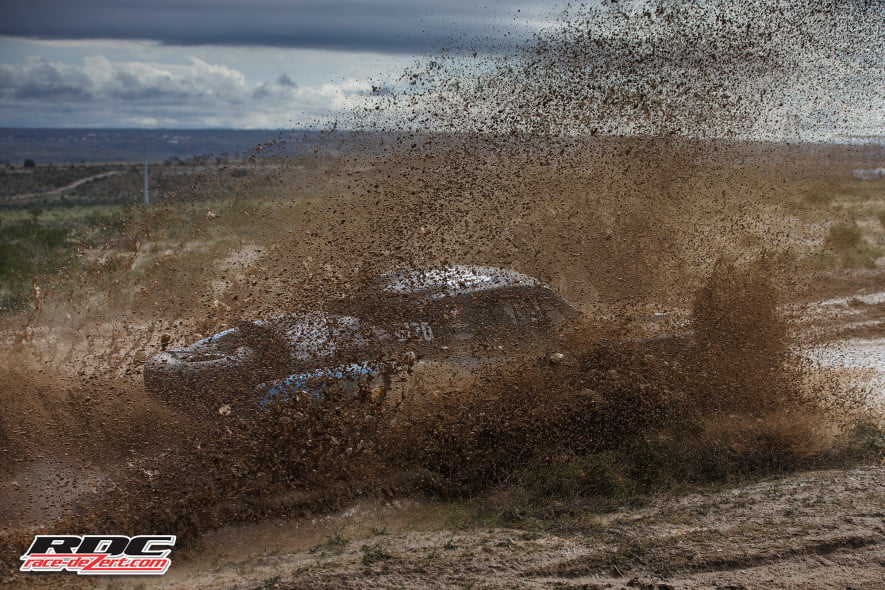 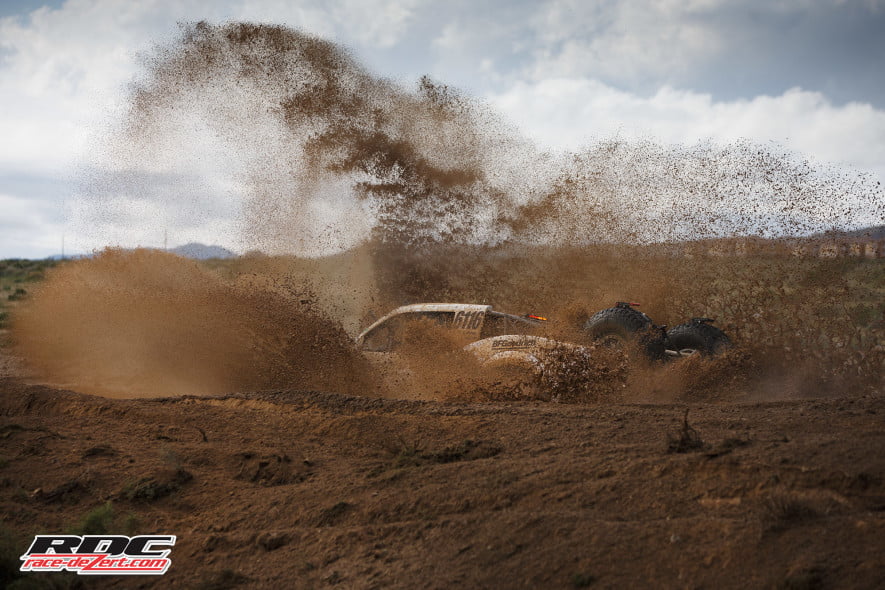 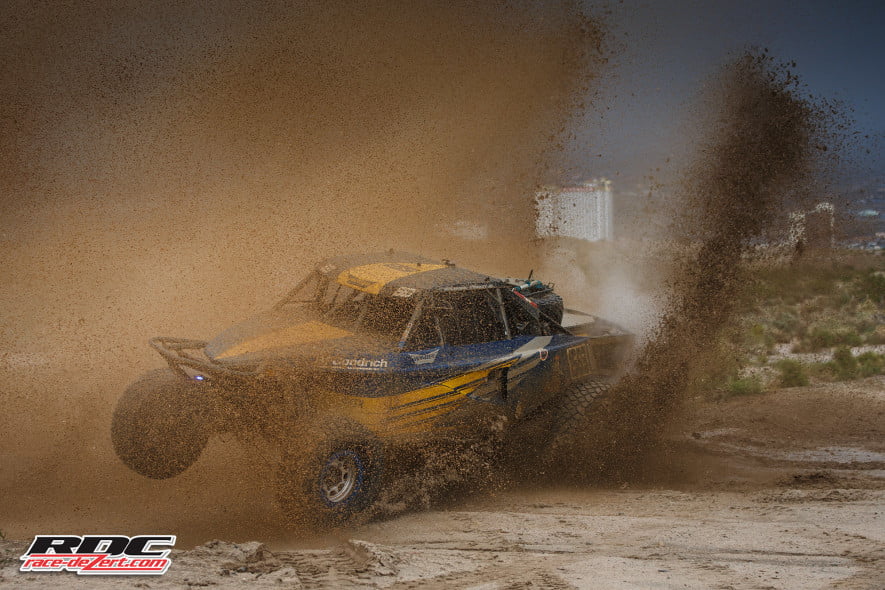 BITD did what they could with bulldozers to try and drain the rain from the racecourse but with how much it rained it was just too much. Water was splashing 20′ over the cars and drivers were drenched trying to navigate the course in the rain. 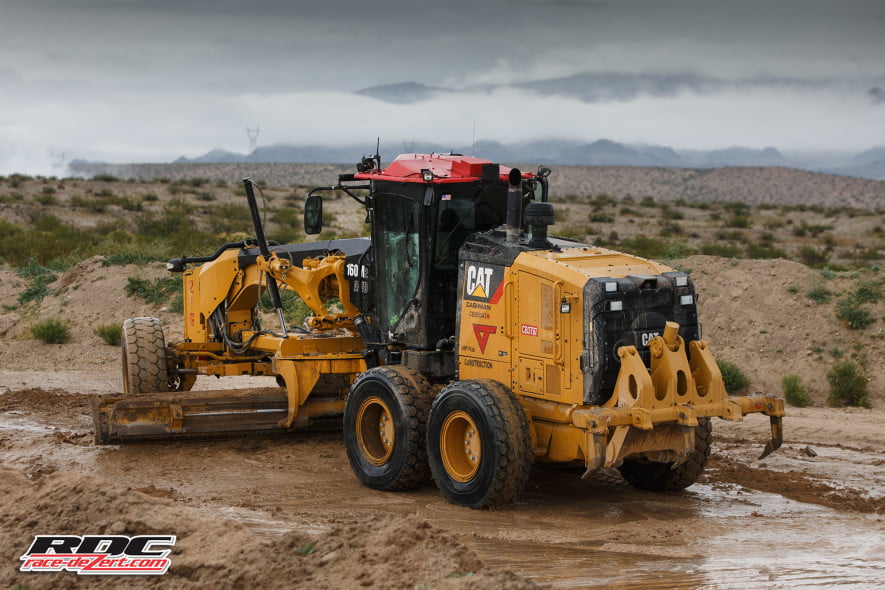 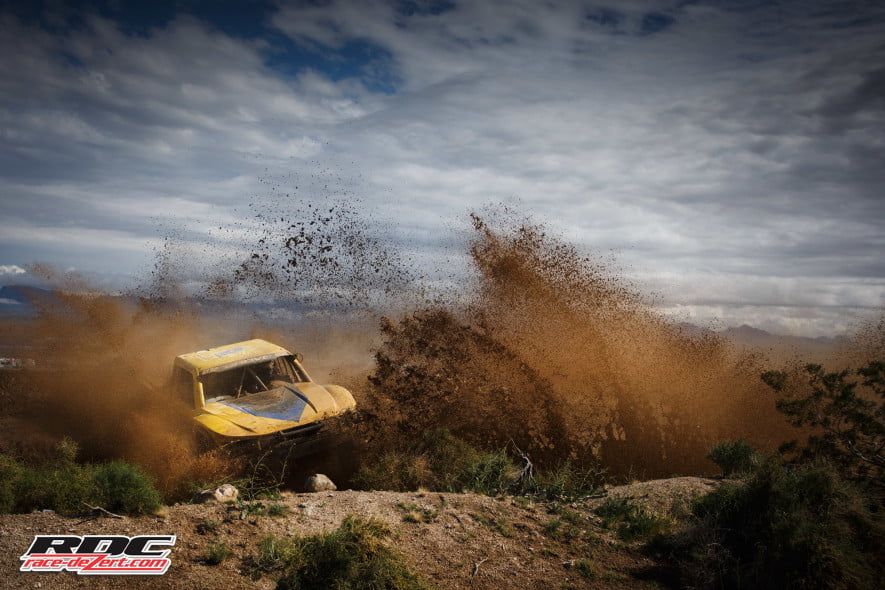 Right before the third heat which featured the 1500/1000/6200 cars the rain halted but the damage was done and most of the water remained all the way until after the last head of the day with the Trick Trucks. 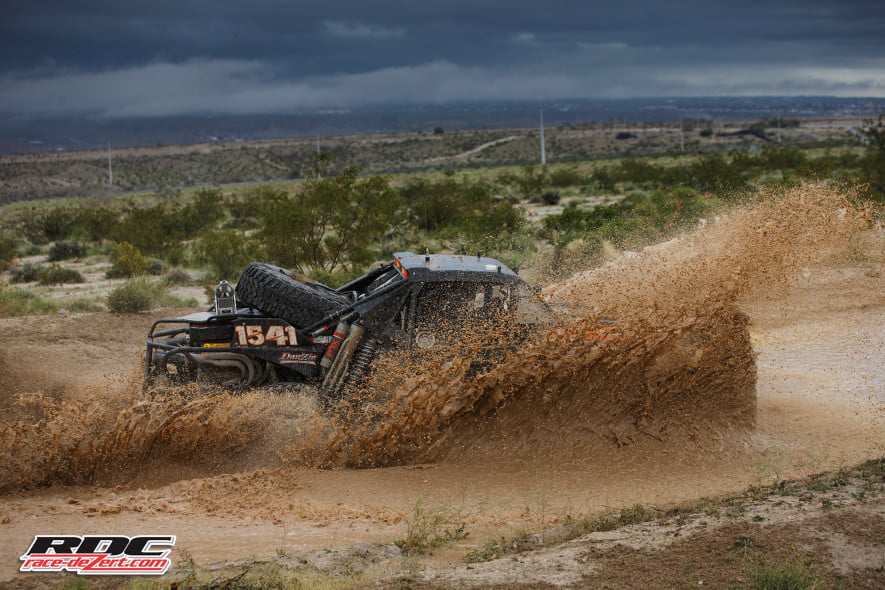 In the Trick Truck class Jason Voss won on Saturday after Justin Lofton had a flat and then broke an input shaft. With the clean air Voss was able to put a little under a minutes time on next fastest Apdaly Lopez (driving the #2 Smiley truck) followed by Carrie Smiley in the #47. The brutal race conditions gave lots of teams issues, many having to stop multiple times on the course to fix issues related to the water damage. 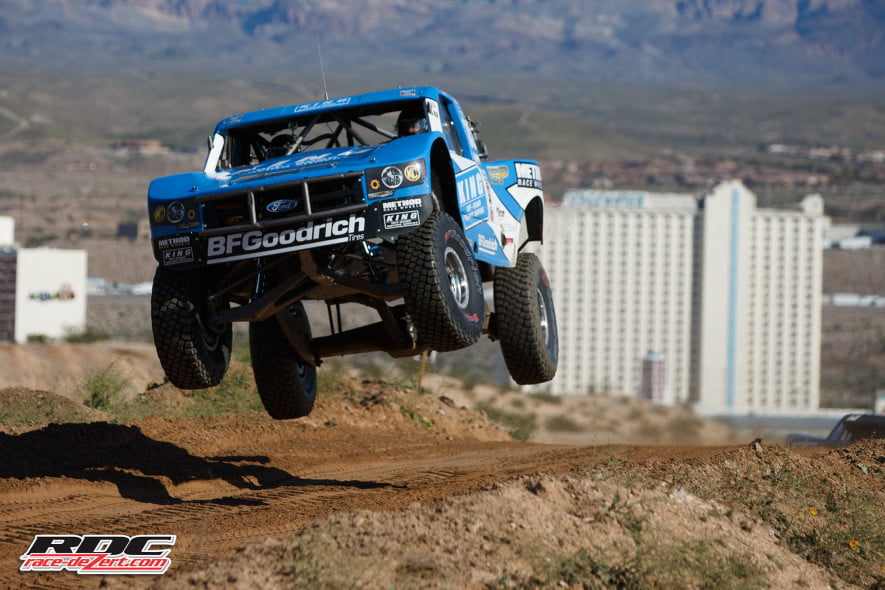 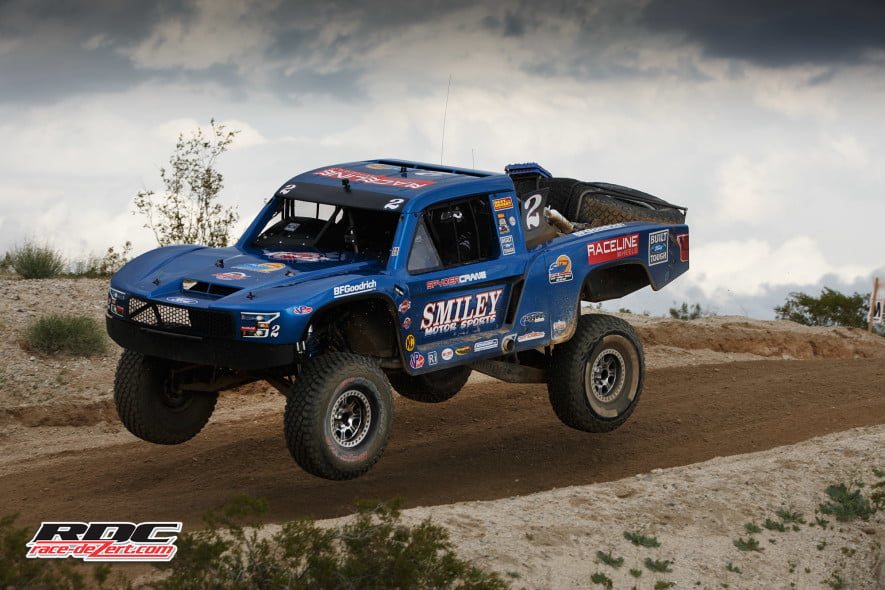 On day 2 Voss and Lopez started side by side with Voss getting the hole shot into the first table top jump. He was able to keep Lopez at bay for the first lap but pushing hard Lopez was able to make the pass around halfway through lap #2. Voss started to have some issues including two flat tires so it looked as if Lopez would be able to take home the win. 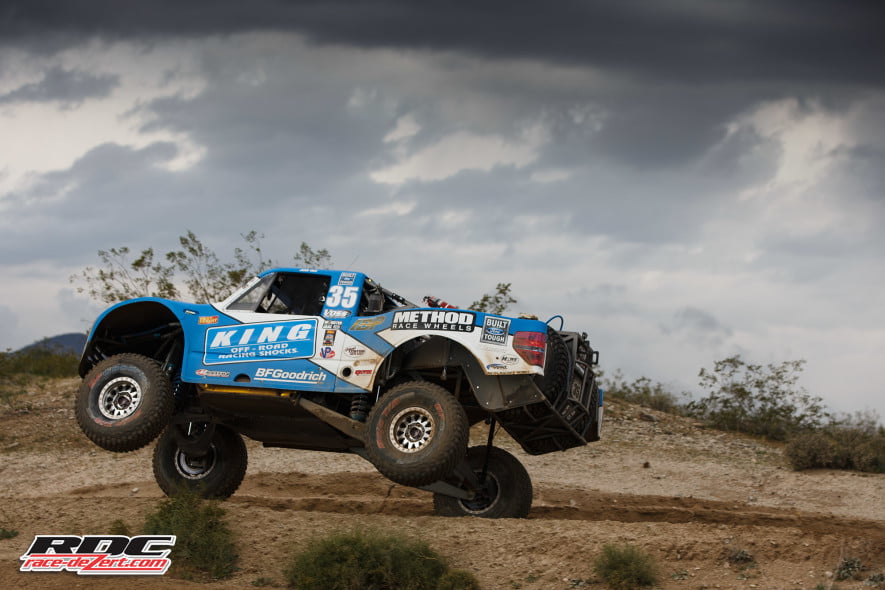 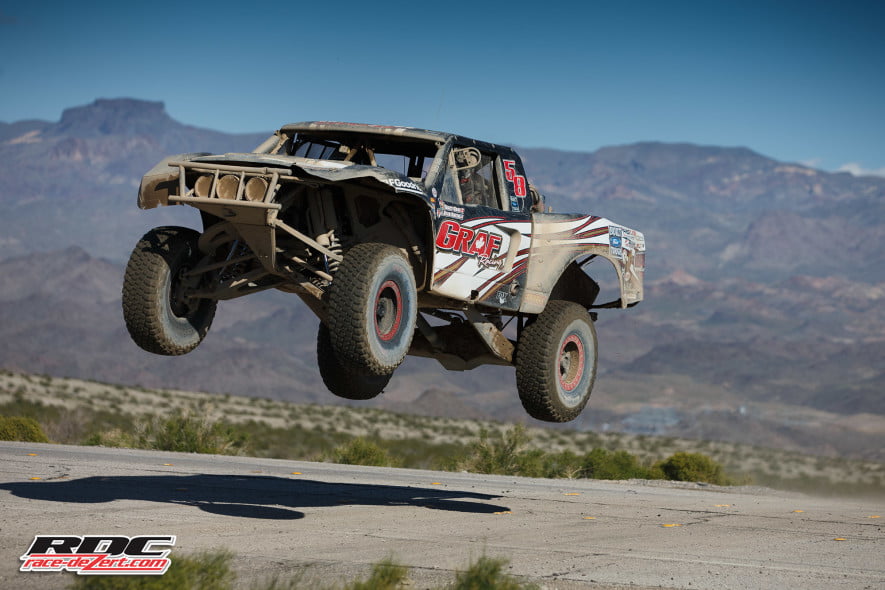 On the last lap and on the last few turns before heading into the infield holding onto the overall lead tragedy struck and Lopez’s truck came to a stop. He had a large enough lead over Adam Householder who was running strong behind him and if it were something simple like a tire change he could of continued, but unfortunately he couldn’t get going again and wasn’t able to finish the lap. I’m sure as Householder passed a stopped Lopez his adrenaline had to have spiked again knowing that he was ahead of Voss and now the physical leader. 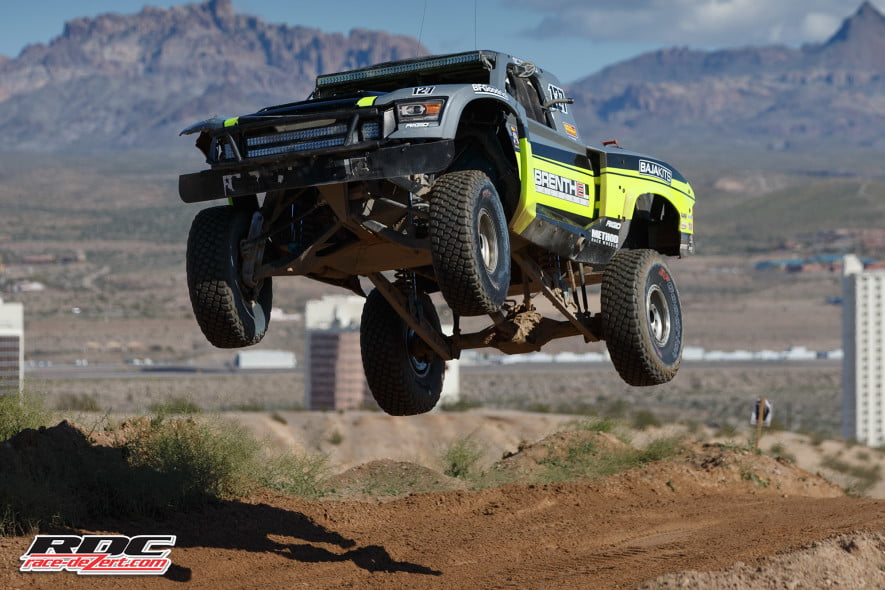 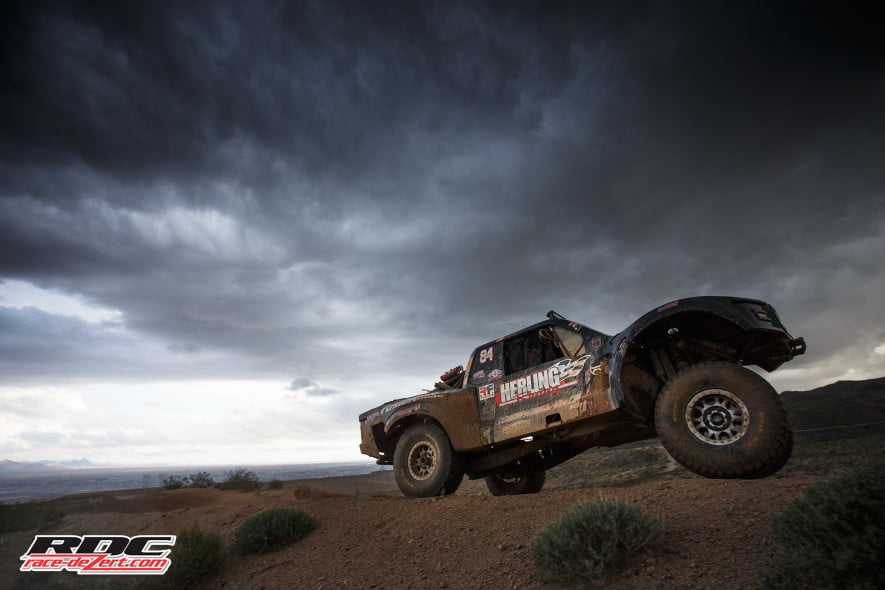 Coming across the finish line he was greeted wit ha BFG Winner hat and was your overall winner of the weekend. Followed behind him was Kevin Thompson who split driving duties with Harley Letner, and never giving up Jason Voss finished third to keep some valuable points after winning Parker. 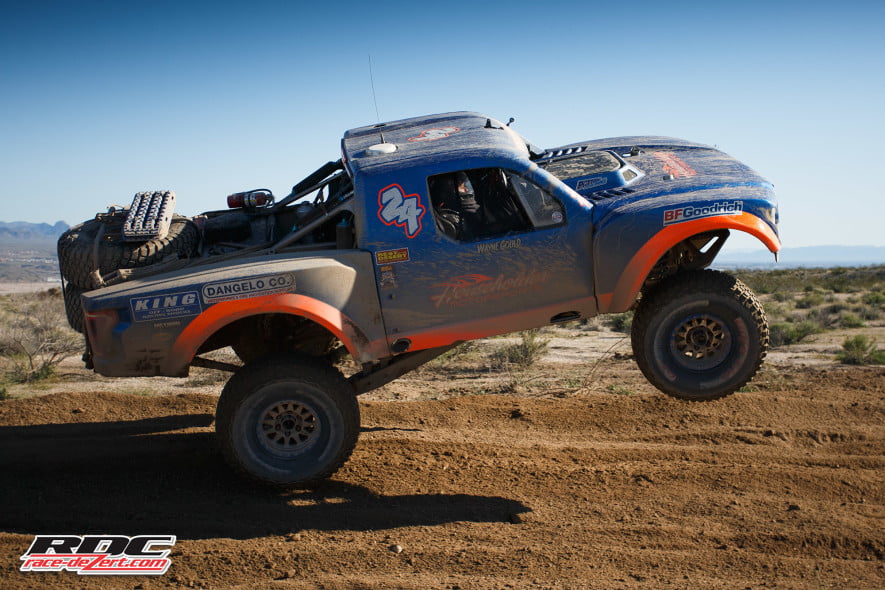 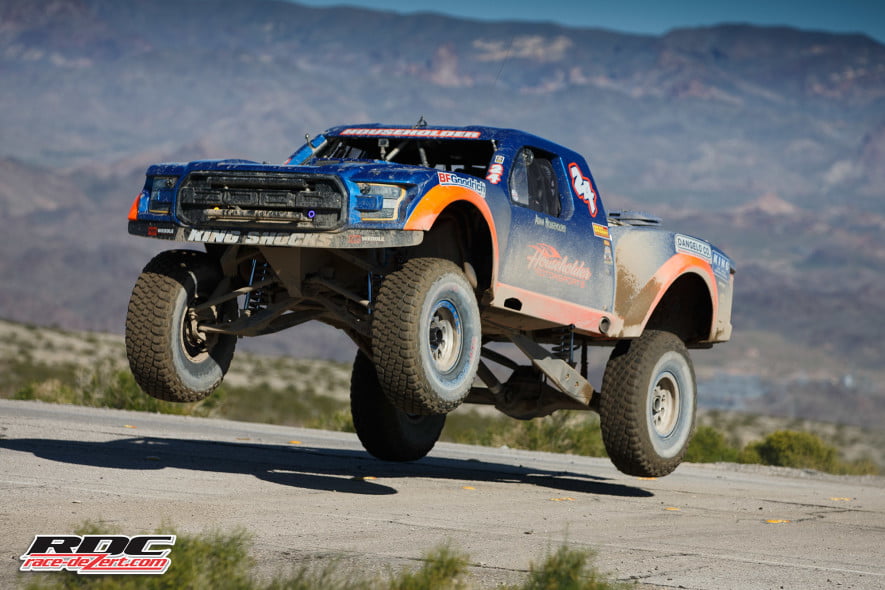 In Class 1500 James Dean put on a clinic on Saturday and was continuing to do so on Sunday until they had to pull over to change a belt on the last lap about halfway through the course. They got going again but would throw another belt and without another replacement were force to pull over and call it a day. Sam Berri who finished fourth on Saturday showed that you really never give up. Both Bob Lofton and Brandon Bailey who finished ahead of Berri Saturday had issues which gave Berri the win for the weekend. Michael Frye finished in second place and Bailey would grab the last podium spot. 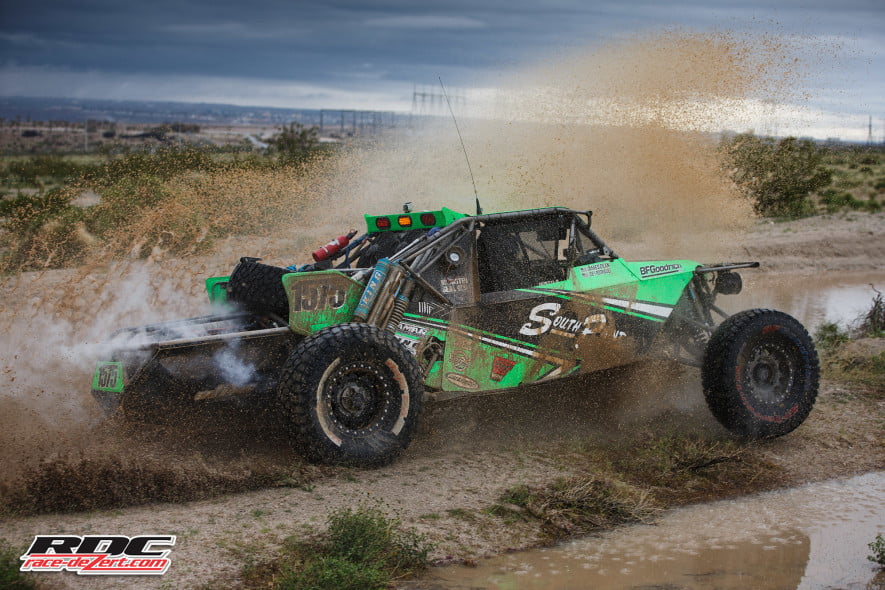 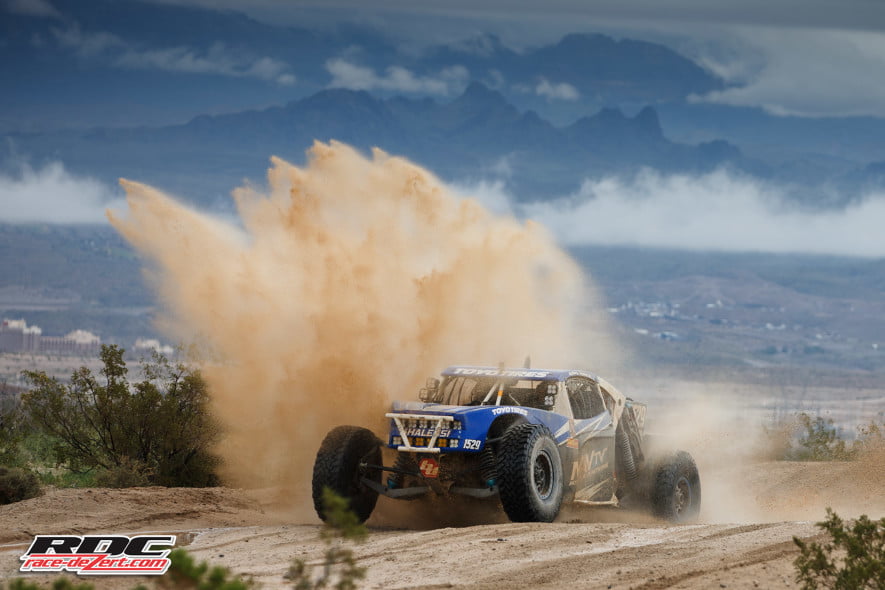 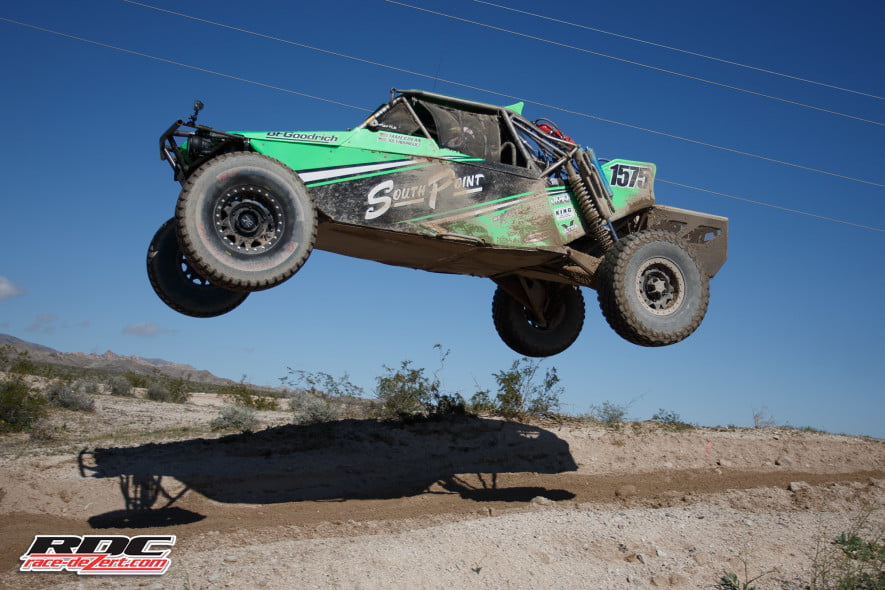 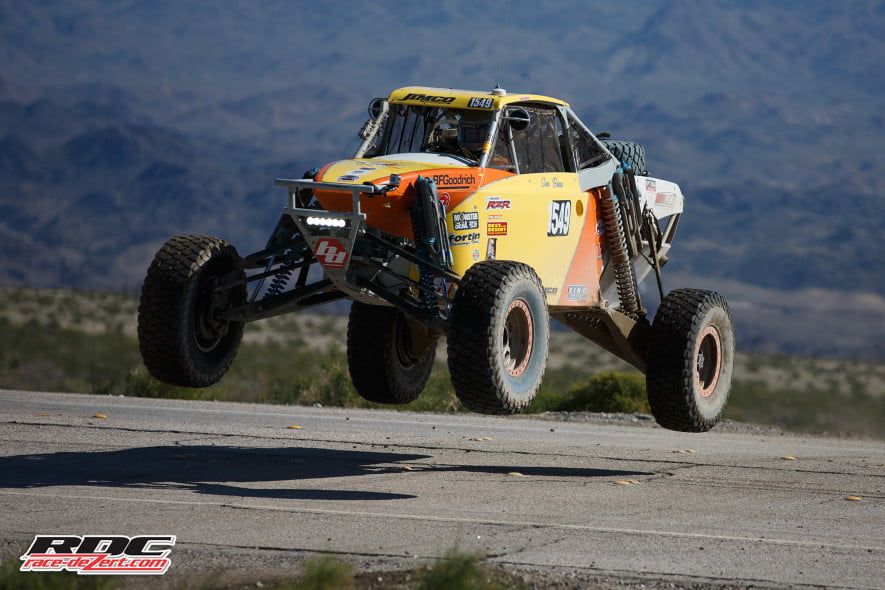 The 6100 Class had some of the closest racing all weekend with packs of truck bunched up both days battling the elements. Kyle Jergensen racing for Brenthel qualified first and was leading the race before suffering an issue that would force him in the back of the pack. Eight trucks were all within two minutes of each other as trucks swapped positions back and forth. At the end of Saturday RJ Anderson would finish first ahead of Dustin Grabowski by only 34 seconds, and the next 14 trucks were only separated by nearly 3 minutes. 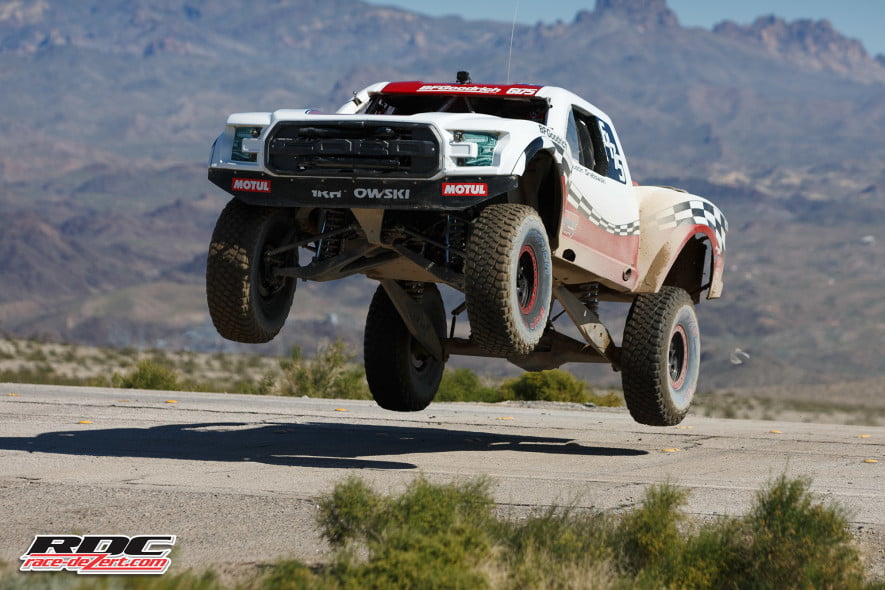 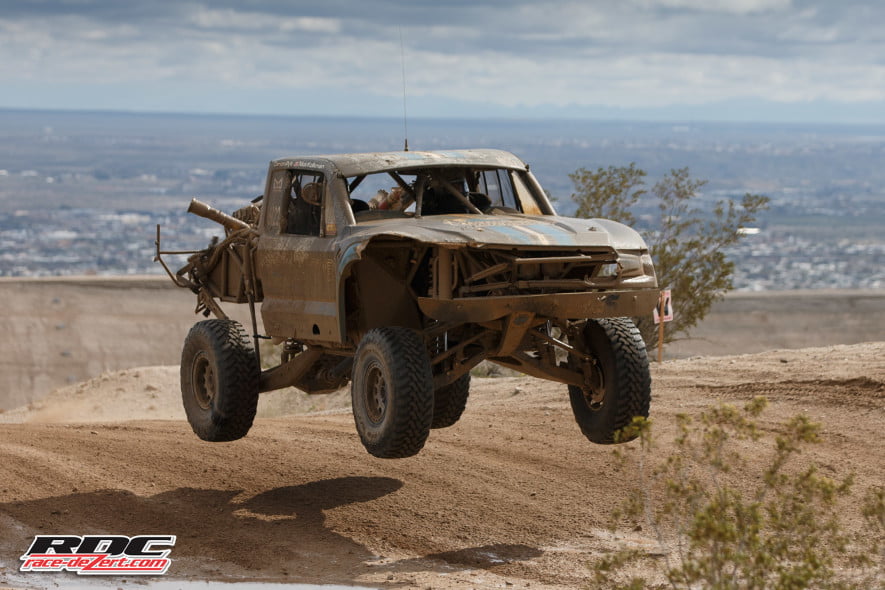 On day two RJ would suffer a steering issues off the start not letting him finish which gave Grabowski the physical lead which he held for two laps. The results of Saturday were so close it was impossible to see who was in the lead during the race. Just like the day before the 6100 trucks were battling all day in packs, and the finishing so close Ryan Hancock was told he was the winner, but after the team celebrated it was learned that Kyle Craft and James Dean were the actual winners by a mere 31 seconds. After his DNF in the 1500 car it was a nice redemption for Dean who drove all day Sunday. 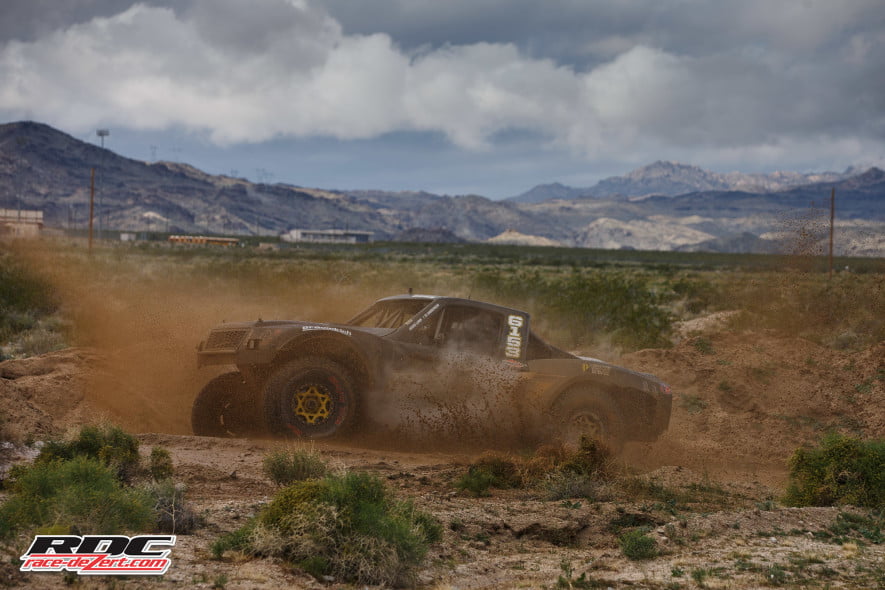 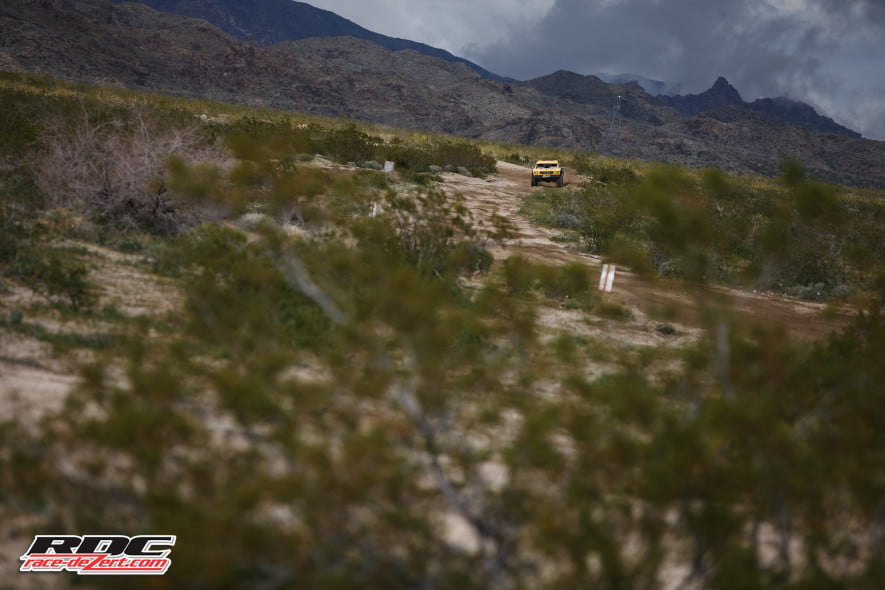 Hancock would have to settle for second place and Troy Messer ended up in third place 14 second behind Hancock. In fact 1st through 7th place were only two minutes apart over two days of racing. 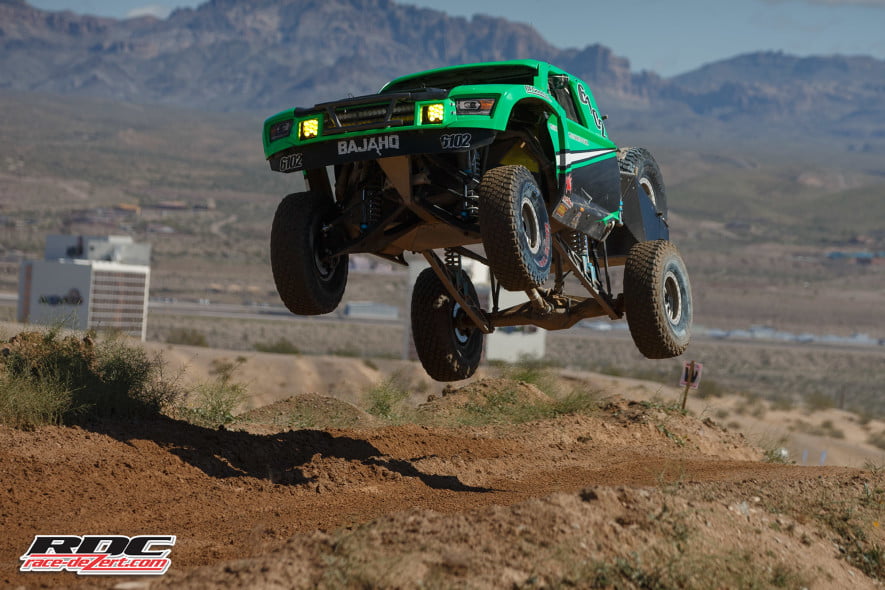 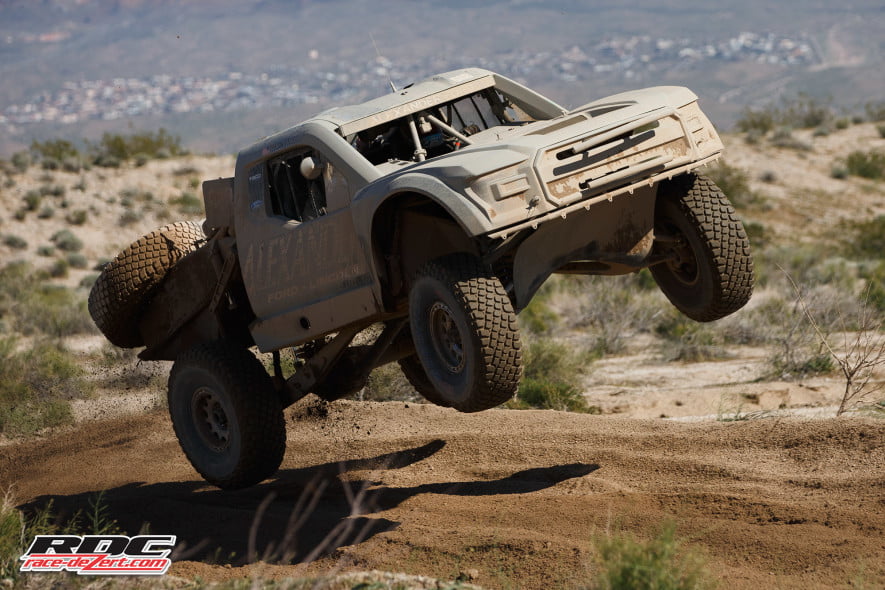 Other class winners for the weekend were Connor McMullen in Class 1000 who finished 11 minutes ahead of second place, Skyloorr Gambrellz in 2700, Nicole Youngblood in Trophylite and Scott Biehl in 1700.

So Connor McMullen gets the overall in heat #3 in Class 10 and barley gets his name mentioned?

You actually read the stories? I thought everyone just looked at the photos.
Instagram // @HighRevPhoto

He went fast. All the other fast guys broke. That’s the story. Kid rips!

havahockey said:
You actually read the stories? I thought everyone just looked at the photos.
Click to expand...

Great pics and I did read the story! Thanks for the shout out.... You did spell my name wrong! haha... and listed the wrong winner for class 1700 too..... But us Jeepspeeders will take any of the love we can get!
Skyler Gambrell
"But our shenanigans are cheeky and fun!!!!"

dislocated1 said:
Great pics and I did read the story! Thanks for the shout out.... You did spell my name wrong! haha... and listed the wrong winner for class 1700 too..... But us Jeepspeeders will take any of the love we can get!
Click to expand...

jeepspeed, the only class where $ is the last excuse for being competitive, a drivers class.

Ouch!!! Way to go Connor and team!! Pics of cars that DNF'd and nothing about the kid that just beat everyone but two TT's with 200 hp....
https://www.facebook.com/CJHUTCHINS1527
Follow me on IG CJ_Hutchins

C.J. Hutchins said:
Ouch!!! Way to go Connor and team!! Pics of cars that DNF'd and nothing about the kid that just beat everyone but two TT's with 200 hp....
Click to expand...

He forgot about the 6100’s that went faster than Connor too. But still an impressive run
J

Rcamp99 said:
He forgot about the 6100’s that went faster than Connor too. But still an impressive run
Click to expand...

all of the 6100's?? there were three trucks that were faster by a couple minutes on sunday. Very impressive.

C.J. Hutchins said:
Ouch!!! Way to go Connor and team!! Pics of cars that DNF'd and nothing about the kid that just beat everyone but two TT's with 200 hp....
Click to expand...

He drove an amazing race but just for clarification he was 7th over all - 4 6100's and 2 TT's completed their 8 laps faster. He proved the horse power isn't the only thing that wins races. He was smooth and consistent on every single lap I saw.
Motorsports Safety Solutions
www.racesafely.com

Not to mention heat 3 had disadvantage on day 1, BITD did there best to fix the course DURING heat 3 so the 6100 and the TTs had a (slightly) better course. Some puddles where graded out a some corners where completely cut off. All in all these made minimal changes, probably added a couple seconds to his time. Just complimenting Conner even more He's 2 for 2 OA buggy in BITD #BEAST
Share:
Facebook Twitter Reddit Pinterest Tumblr WhatsApp Email Share Link