As the end of year festivities are slowly closing up, the tradition stays unchanged for the last 6 years, meaning the participants of the Africa Eco Race are finalizing their registrations and doing their last checks. On the organization’s side, it is also a total effervescence as there is only one month left to have everything ready for this great adventure starting in St Cyprien on December 28th.

By having an extra stage in Mauritania, the 7th edition of the Africa Eco Race is surely looking tougher than ever. The race in general should be quite classic in order to prioritize security, although there will be new stages in Morocco and as previously said, an extra Mauritanian stage. Even if some selective sections are already known, the landscape has changed quite a lot in southern Morocco and in the Mauritanian desert due to the extreme flooding during fall.

This is the opportunity for all, old and newcomers, to be equal and share even more pleasure on the Africa Eco Race, the only African Rally offering 12 stages with such diversity along a 5800km race out of which 3500km are selective sectors in 2015. 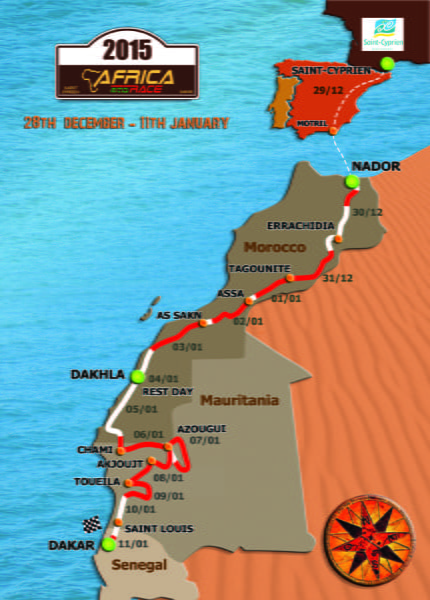 Towards a record beating edition
Year after year, the notoriety of the Africa Eco Race is increasing constantly as new participants are joining the Rally. In 2015, it’s especially on the trucks and bikes side where there will be a lot of newcomers making it a record in terms of participants in both categories. 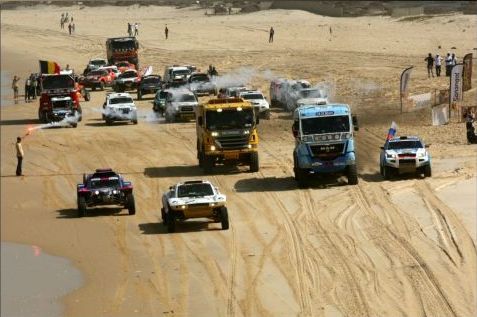 10 Trucks in the Race 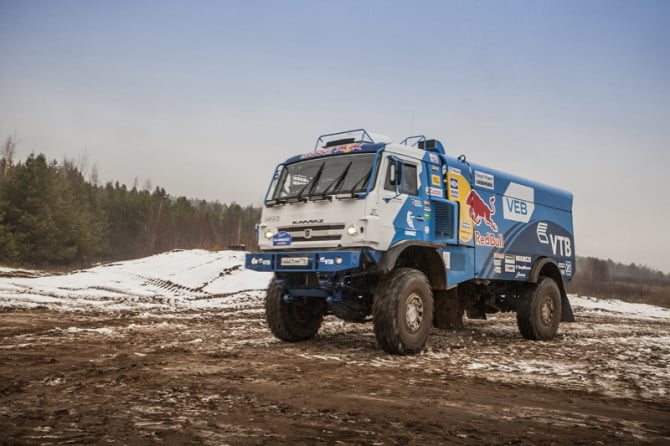 About 10 trucks will take the start of the 2015 Africa Eco Race, and not just any trucks it will be « la creme de la creme » . First of all with Team KAMAZ, which are doing their comeback in Africa. The Russian armada will be composed of Anton SHIBALOV, on the last evolution of the KAMAZ Sport Truck along with Sergey KUPRIANOV, that will have quite a challenge as he will use a Hybrid version of the KAMAZ Truck creating a futur sensation for sure.
After that, with Tomas TOMECEK from Czech Republic, 4 time winner of the category and title holder on his TATRA Truck tagged to the colors of a brand new sponsor. 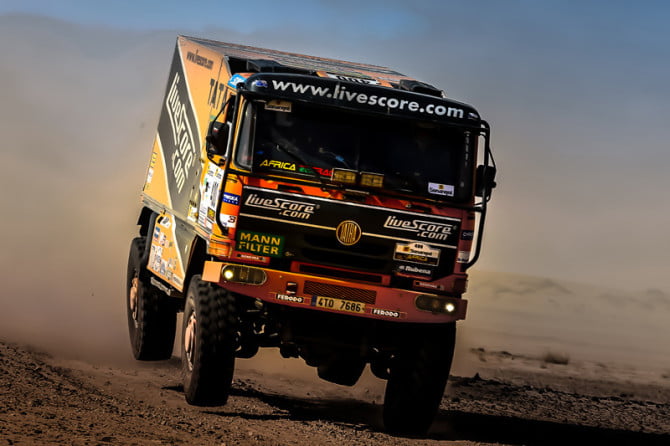 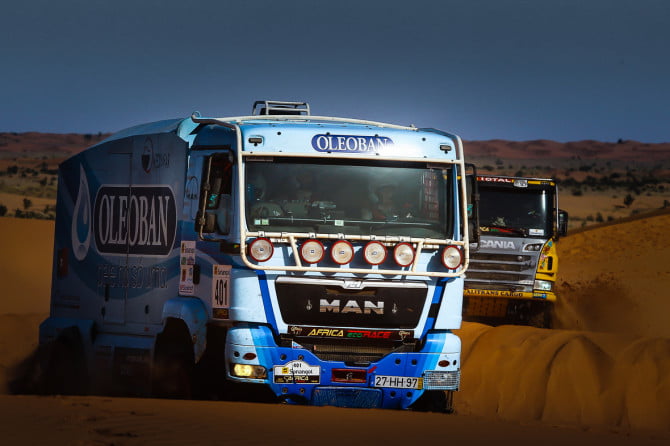 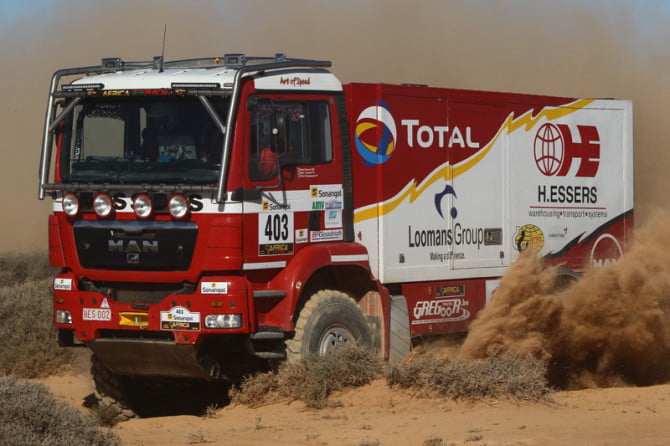 Noël ESSERS
Finally, the very experienced driver, Noel ESSERS on a MAN Truck is one of the regular participants along with Gregoor BOUWENS and his IVECO. They should both animate quite a lot the Truck category. 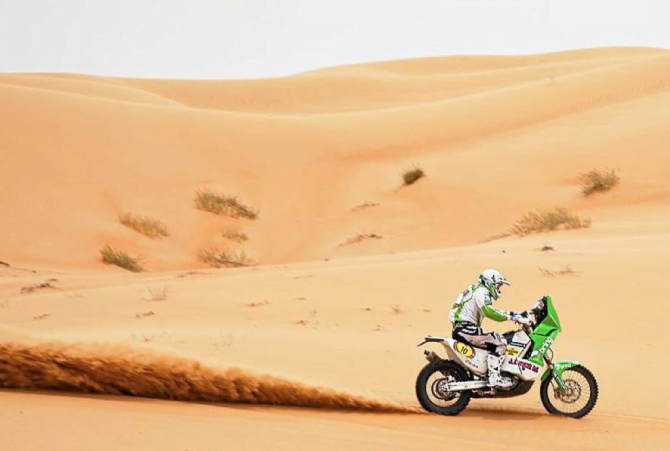 Pal Anders ULLEVASETER
With about 30 bikes at the start, 13 different nationalities and 2 women in the race, the bike category should be more than interesting. Pal Anders ULLEVASETER from Norway, has taken part to many offroad rallies all around the world for the past 20 years and could use his experience to win his first BIG victory of his career.
The viking will therefore need to fight hard with Austria’s Robert THEURETZBACHER, which is breathtakingly fast and which was discovered on the 2014 Africa Eco Race. He was heading for a podium finish on his first racing experience but unfortunately a mechanical issue took all chances away. 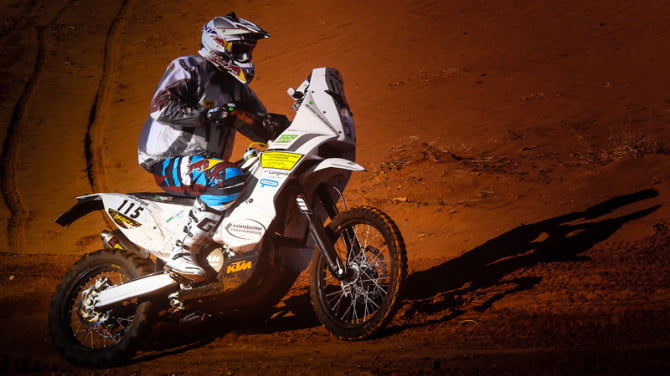 Robert THEURETZBACHER
Also, the Africa Eco Race is a race where experience is one of the most important points and Nobert DUBOIS, who is a regular participant will be accompanied by his mates from Team « Motards du Désert » Christophe CONREAU, Gilles VANDERWEYEN, Pascal BOUCHET and Bernard MONTAZ. Nobert will be taking the start with big ambitions, in other words victory. 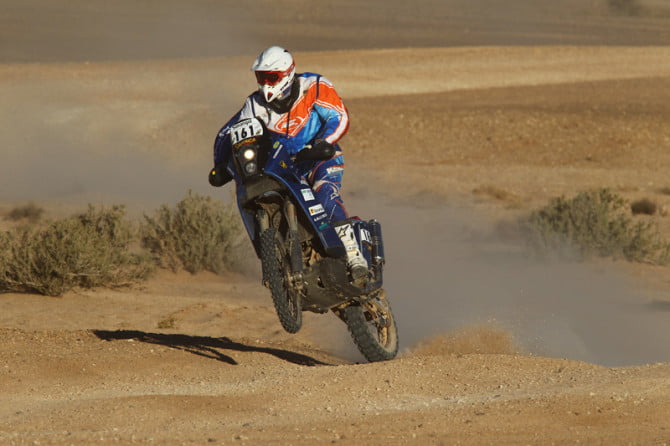 Norbert DUBOIS
But one of the big news of this 7th Edition of the Africa Eco Race is the participation of 2 women bikers, with Patsy QUICK, bringing along an important delegation from Great Britain and the very fast Anastasiya NIFONTOVA, 2014 Vice World Champion of the FIM Rally Championship.
Two totally different pilots, with on one side Patsy with a large experience of the category and on the other side Anastasiya which will discover Africa, but both sharing the goal to finish at the Lac Rose, just like Todor HRISTOV which will be the only Quad pilot of the Race. 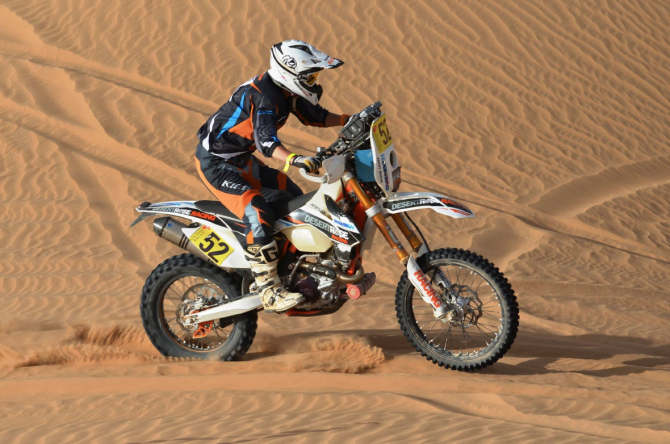 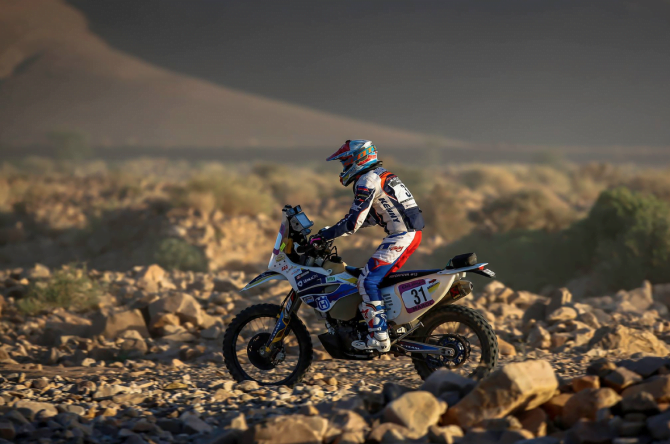 A homogeneous pack in the Car category
In the Car category, if you play the prediction game, lucky is the one who will be able to guess the winner or even the final podium. Indeed, either in 4×4 or 2WD, the pack will be very homogeneous and therefore some nice battles should take place. With a lot of experience acquired by participating on the 6 past edition, Jacky LOOMANS and his TOYOTA Overdrive pick up are for sure one of the favs. 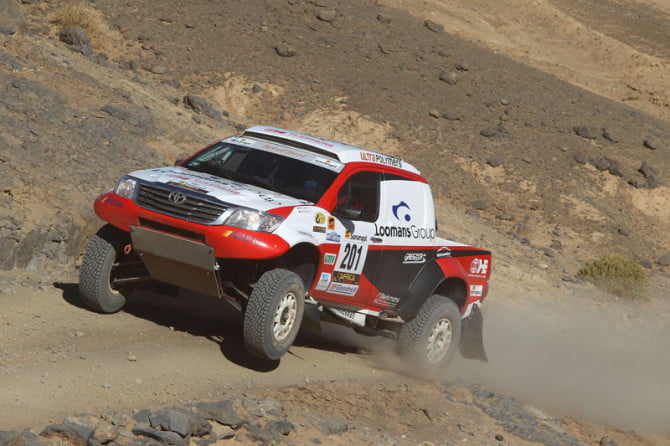 Jacky LOOMANS
But the Belgian will have to put every single chance on his side as his countryman Erwin IMSCHOOT has just acquired the exact same machine, same as Kazakhstan’s Kanat SHAGIROV. Balazs SZALAY from Hungary, who was one of the favorites in 2014 before the engine of his OPEL Prototype 4×4 broke, will also perform for victory. 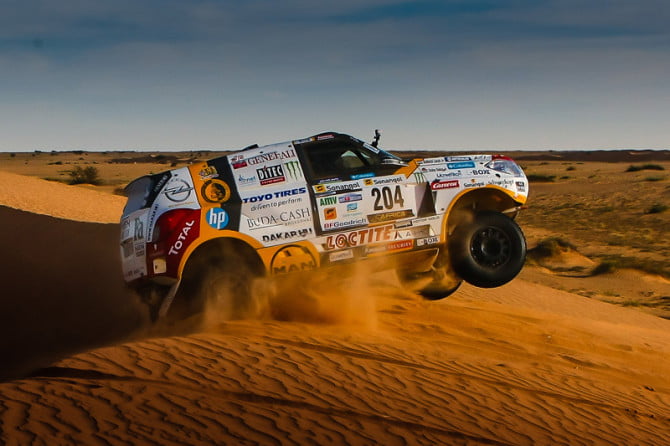 Balazs SZALAY
Still in 4x4s, Miroslav ZAPLETAL as well as Yuriy SAZONOV and Andrey CHEREDNIKOV, all three driving Hummer H3s could come and disturb the others.
However, after the technical stages in Morocco, which are favorable to the 4x4s, the race should balance with the Buggies in the wide Mauritanian stages. Jean Antoine SABATIER which was very performant last year at the wheel of his Bugga One should be able to take part in the battle as well as Yves FROMONT and Patrick MARTIN, always fighting at the front of the pack with their diesel Volkswagen Buggies. An eye will have to be kept on Philippe PORCHERON and his mate Thierry MAURY as they will be representing the DAKAR DREAM team but also on Mathieu SERRADORI which is a quick learner.
The fight between Buggies & 4×4
One last word on the T2 category, which is the « stock » class. It has never been so well represented with about 10 cars in the race of which America’s Michael ZIEGLER, Kazakhstan’s Marat ABYKAYEV and Pawel MOLGO from Poland. They will all have a hard time trying to beat the last edition’s winner Jean Louis JUCHAULT, but also Marc AIVAZIAN and Olivier AUBINEAU or even Laurent HAY and Gilles GARD who has won over cancer twice, now wanting to win in the Mauritanian dunes. 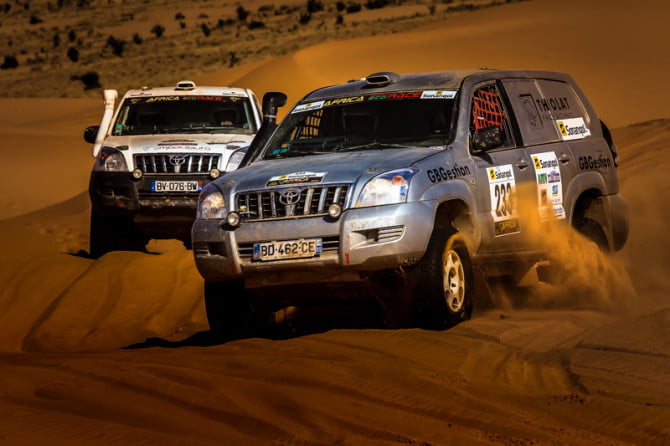 The Africa Eco Race is ever more international
All the efforts put in place, if it’s either the broadcasting of the images on international television programs, or the purchasing of air time on Eurosport, which will also continue in 2015, all have undoubtedly worked successfully.
Indeed, the rally has never had so many different nationalities taking part in the race. The competitors are coming from Bulgaria, New Zealand, the United Kingdom, the United States of America, the Emirates and even from Namibia. It’s so far a total of 29 nationalities who will take the start and there may be more, as new competitors are signing up every day. 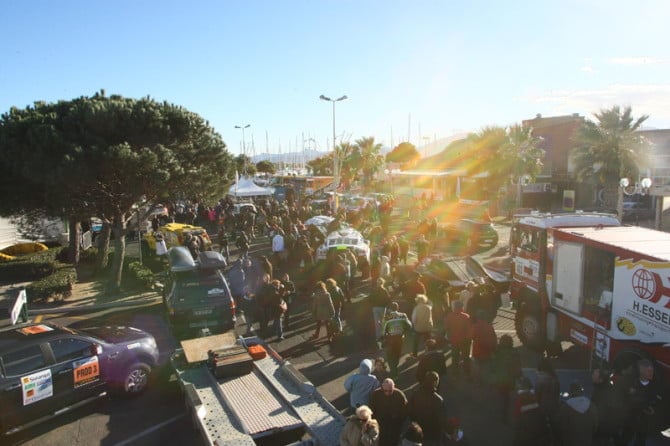 For the 4th year running, the Africa Eco Race will start from Saint Cyprien, this seaside resort in the Eastern Pyrenees is now well known by all amateurs of off road rallying. Once again, the Tourist Office will put everything in place in order to make this major French motorsport event one of the best of this end of the year. Like in 2013, the JOA Casino will receive all the administrative checks whereas for the vehicles they will be prepared under a big heated tent. On Sunday 28th, from 7am to 6pm, the public will have total access to the event and will be able to walk around the vehicles and meet the teams. At 7pm, Mister Thierry DEL POSO, the Mayor of Saint Cyprien, will give the start of the race with the French flag to the first Motorbike competitor. 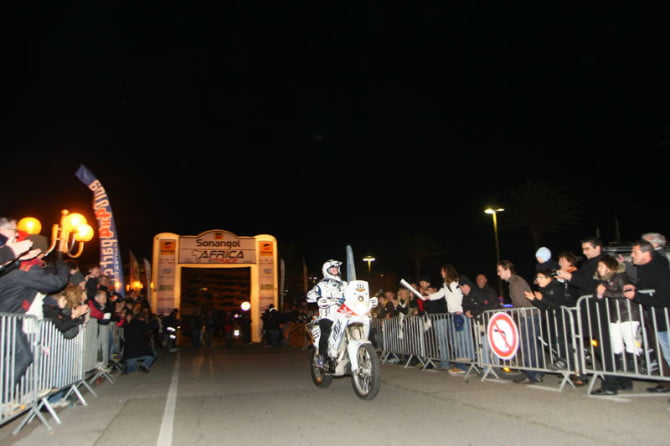 Solidarity is still the Key word
Every year, multiple solidarity initiatives are put in place by the competitors or the teams with a logistical support from the organization team of the Africa Eco Race, everything will then be donated to the population in the countries crossed. This way, it is several tons of material and various products which are transported and distributed directly in the towns in Morocco, Mauritius and Senegal. In the 2014 edition, Julia SCHRENCK, the Rally Queen from the Austrian team Elite Racing, delivered some solar panels to the NGO “la Kaïma des Petits à Nouakchott”. Heart broken by what she saw when she met the Mauritius children she created an association “Education 4 Future” all tough she is still recovering, she will be present in the 2015 rally in order to hand out the school gear, toys and lots of other useful things that are transported in the organizers’ trucks. 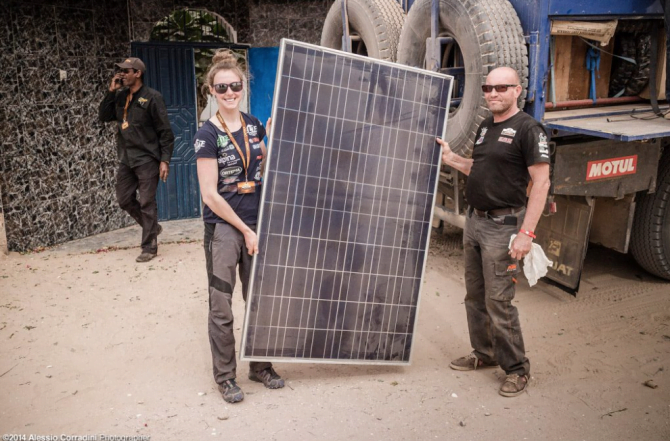 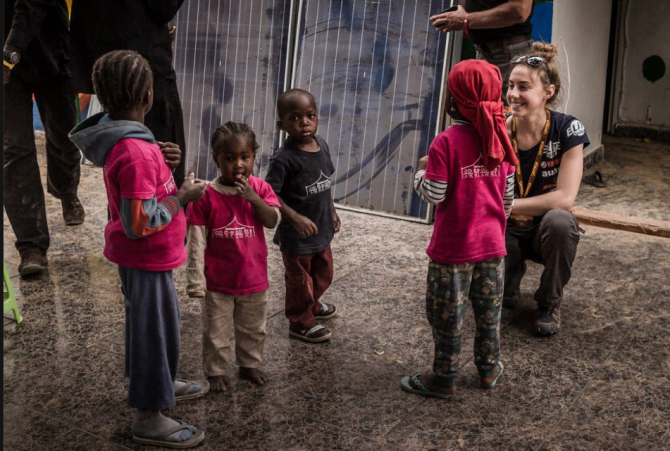 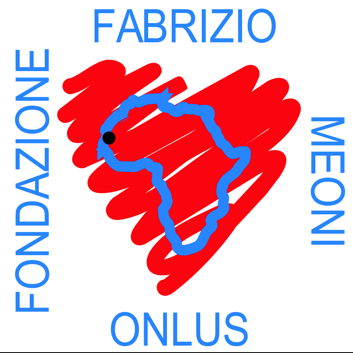 In 2015, the Africa Eco Race will bring its support to two humanitarian operations through the collect of donations. The first operation is the “Meoni Foudation”, in order to pay respects to Fabrizio, on the 10 anniversary of his lost, and to carry on his action towards the 3 schools in Dakar. The second operation is a material support to “Village Pilote” in which 70 youths, looked after by a French NGO, will be invited to the Lac Rose in order to celebrate the arrival of the rally and receive their gifts.

All the informations on : www.africarace.com