The Method Race Wheels Spec Trophy Truck / 6100 Truck of Austin (AJ) Jones is one of the sport’s most competitive vehicles in a division that sees fierce opposition from skilled and talented drivers. The TSCO Racing built truck owns a stellar race record with approximately 4,000 off road race miles under its belt, 8 SCORE-International Baja races with 4 victories: 2 Baja 1000 wins, a Baja 500 win, a Baja 250 win, and 3 other Top 5 finishes. 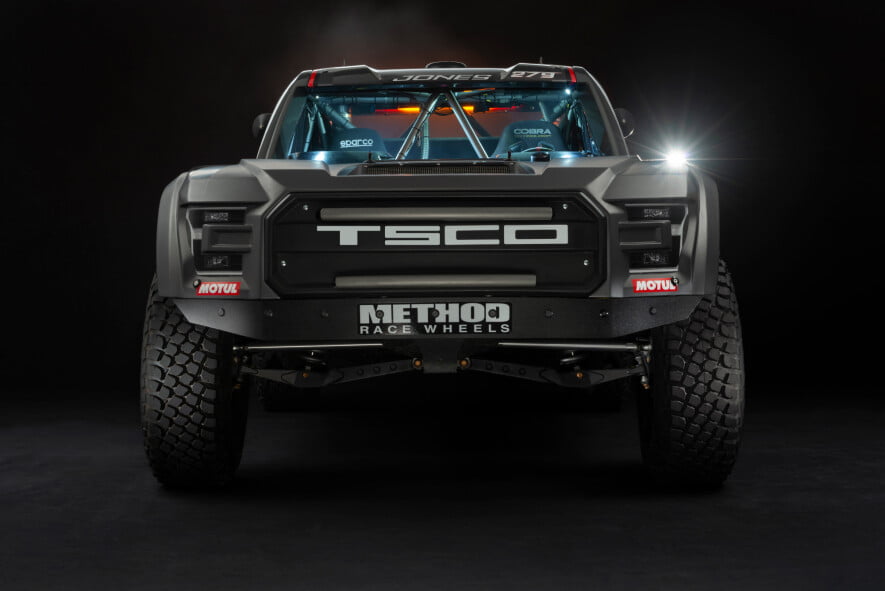 When TSCO Racing set out to build the most competitive and reliable Spec Trophy Truck / 6100 Truck, they determined that this vehicle had to be born as a purpose-built 6100 platform. John Vance and TSCO Racing designed the TS1 (TSCO Spec Chassis #1) and completed the build in 4 months, just in time for the 2017 Baja 1000. Bryce Swaim of Thunderstruck Motorsports took the keys and went on to earn a 2nd place finish right out of the box. In 2018, AJ Jones and Bryce Swaim teamed up to race the truck to campaign for a SCORE Championship. Together, in the TSCO built and prepped TS1, they pulled off the hat trick winning the Baja 500, the Baja 1000 and the SCORE points championship. SDG Suspension has countless hours developing the ideal vehicle setup and has been vital contributors to keeping the truck finely tuned, agile and ready for victory. AJ purchased the truck from Swaim in 2019 and teamed up with Brock Heger. They repeated the Baja 1000 win and placed 2nd in the 2019 SCORE Championship.

The ultra-competitive vehicle owns a pure breed racing heritage born from experienced off road racing veterans, like John Vance employed at TSCO Racing. TSCO has been around the off road racing scene since the ’80s with the Weyhrich family. Dick, Gary and Mark Weyhrich started racing in Class 10 and quickly moved into the unlimited buggy class and finally into Trophy Trucks. Eventually, TSCO Racing became an off road race vehicle manufacturer, maintaining and supporting customers on and off the race track. The TS1 is the culminating blueprint of four TSCO built Spec Trophy Trucks that are currently racing and four more under development. Only the finest most capable components are featured specified by Vance’s vehicle design. It is the total package. That's a beautiful truck, fantastic job!
Nikita Khrushchev said"We can't expect the American People to jump from Capitalism to Communism, but we can assist their elected leaders in giving them small doses of Socialism, until they awaken one day to find that they have Communism. "

The TSCO trucks are amazingly well built and fast as heck.

I would love to drive one and see what its like, but that might ruin me. Haha

I believe Bryce Swain is suppossed to be Bryce Swaim.
AMERICA BLESS GOD!

baja619 said:
I believe Bryce Swain is suppossed to be Bryce Swaim.
Click to expand...