Al-Attiyah digs deep to hold off Peterhansel at Rally Kazakhstan 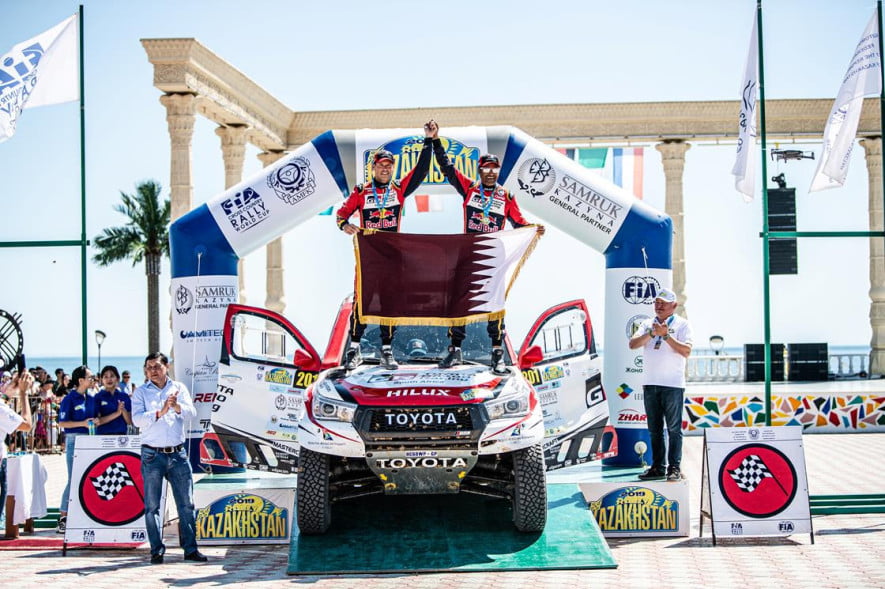 A dramatic battle between two multiple Dakar champions lit up the final stages of the 2019 Rally Kazakhstan. A late charge from 13-time Dakar winner Stéphane Peterhansel (FRA)nearly wrestled victory away from reigning Dakar champion Nasser Al-Attiyah (QAT). In a pulsating end to the rally, Al-Attiyah held on to win by just five minutes after 18 hours of racing against the clock in Kazakhstan.

Al-Attiyah and his co-driver Mathieu Baumel (FRA) made a faultless start to this year’s Rally Kazakhstan as they set out to reclaim the title they’d previously won in 2017. The Toyota duo set the fastest time on the first three of the rally’s six arduous stages to establish a lead of over ten minutes.

However, mechanical problems on the fifth stage saw the leading pair stopped in the dunes for 45 minutes as they desperately tried to get their car restarted. Once they found a solution they hit the gas to try and reclaim some of the time they had lost to their rivals.

Al-Attiyah and Baumel’s misfortune on the penultimate stage meant that the win was still within reach of their nearest rivals, the husband and wife crew of Stéphane and Andrea Peterhansel (GER). It took all of the experience of Al-Attiyah and Baumel to take the chequered flag on the final stage in Kazakhstan and secure another winning result.

“Obviously, this is a good year for us, six races and six wins. We drove the last special stage perfectly, everything was under control.” – Nasser Al-Attiyah

Despite missing out on victory by five minutes, the trip to Kazakhstan was another successful mission for Stéphane and Andrea Peterhansel. The married couple were competing in the MINI JCW Buggy for the first time after last month’s win at the Abu Dhabi Desert Challenge was achieved in a MINI JCW Rally vehicle.

Stéphane driving, alongside Andrea navigating, did fantastically to battle back after an unlucky first stage which saw one of their tyres burst in a rocky section and damage sustained to their car. The duo were then able to claw back the 15 minutes they lost on their rivals and finish second, proving that more race wins are just around the corner for the Peterhansels.

“Working with Andrea is getting better all the time. We are gaining more experience together and the timing is good. We’re happy with second place.” – Stéphane Peterhansel

The 2019 FIA World Cup for Cross-Country Rallies standings now have Stéphane Peterhansel in second place with 51 points, behind Nasser Al-Attiyah on 60 points.

Third place at Rally Kazakhstan went to defending World Cup for Cross-Country Rallies champion Kuba Przygonski (POL). Like Al-Attiyah, Przygonski endured a tough fifth stage and plenty of work was needed to get his MINI JCW Rally ready for the final day of racing. With the car fixed, Przygonski and co-driver Timo Gottschalk (GER) were able to secure a spot on the podium.

“It was a good race for us and we are pleased with third place. Overall the speed was good, but we didn’t have the luck to go with it!” – Kuba Przygonski

The truck race at Rally Kazakhstan was completely dominated by Dmitry Sotnikov (RUS) of Team Kamaz Master. Sotnikov set the fastest time on all six stages to take the overall win by a staggering margin of over 12 hours.

“The whole team worked hard for this victory and it was great to have so many fans here supporting us.” – Dmitry Sotnikov

Nasser Al-Attiyah: “I am happy to win Rally Kazakhstan. We are in the lead in the championship, and this is fantastic. Now we are waiting for the Rally of Morocco. Obviously, this is a good year for us, six races and six wins. We drove the last special stage perfectly, everything was under control. The fifth stage was not easy for us. After 50 kilometres our car got stuck and stopped. We did not know the reason and we were stood there for 45 minutes before the car started up again. Then we were pushing and drove the rest of the section well.”

Stéphane Peterhansel: “Unfortunately, we had the issue with the tyres on the first day, the first two days were a little complicated for us overall. But things were better as of day three. The Rally Kazakhstan is different from all the other events: the average speed is very high here and Andrea and I had to get used to that first. Overall, working with Andrea is getting better all the time. We are gaining more experience together and the timing is good. We’re happy with second place.”

Andrea Peterhansel: “In places we were accelerating over 200 kilometres per hour. In such conditions it is not easy to give correct navigation. I got a lot of experience at Rally Kazakhstan.”

Kuba Przygonski: “It was a good race for us and we are pleased with third place. We could have done better, but we made a big mistake on stage five and we damaged the car pretty badly. Fortunately, it was possible to repair the MINI. Overall the speed was good, but we didn’t have the luck to go with it!”

Dmitry Sotnikov: “The race ended with a short special stage of about 150 kilometres. The first half was very fast, although the navigation was not so easy. The average speed was high, but we needed to be alert because there were some big rocks on the route. We just needed to be sensible and bring our truck over the finish line. The whole team worked hard for this victory and it was great to have so many fans here supporting us.”