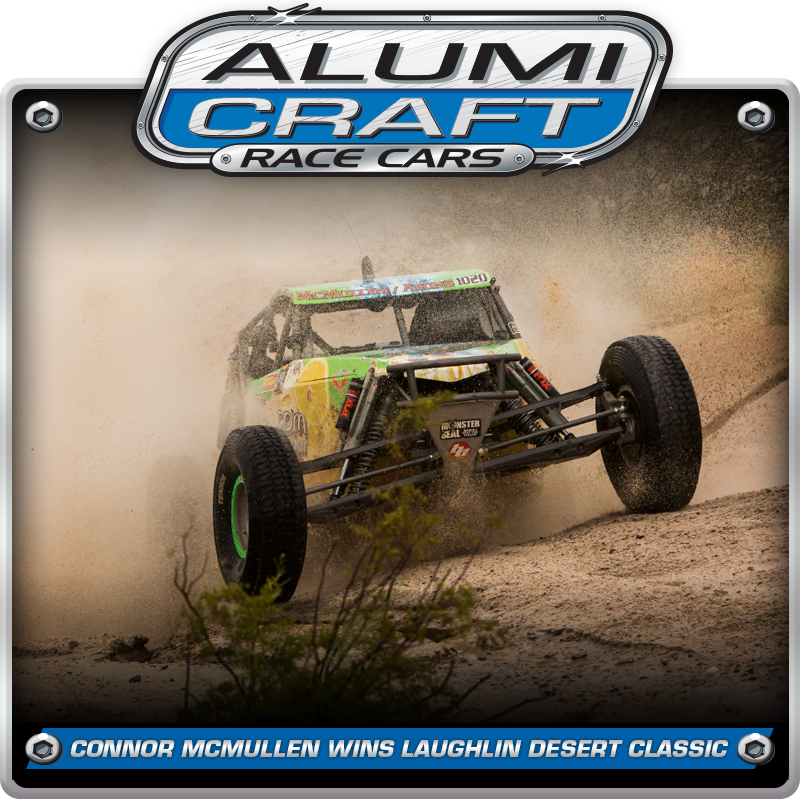 The King Shocks Laughlin Desert Classic sanctioned by Best In The Desert (BITD) featured two days of off-road desert racing along the banks on the Colorado River in Laughlin Nevada. Conner McMullen managed the 17-mile course and added to his consistent string of victories by winning both Race 1 & Race 2 in his #1020 GetTheTea.com Alumi Craft Race Car. 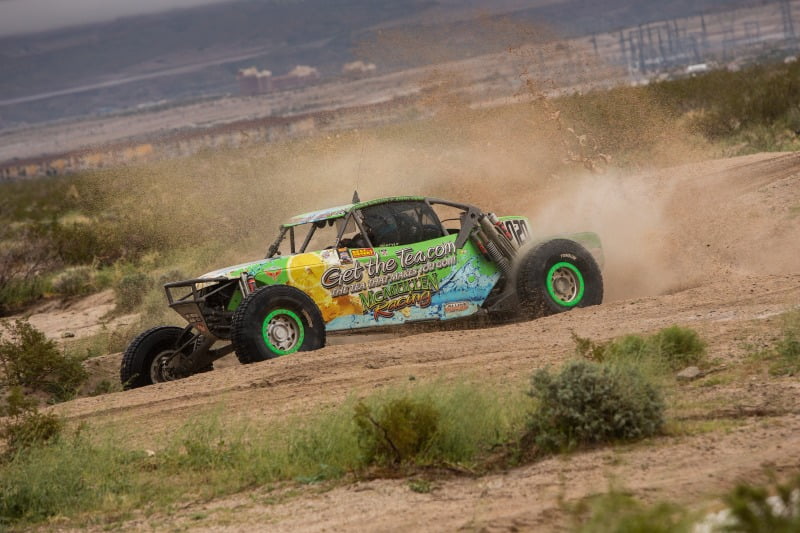 Competing against fourteen other Class 10 cars, and twenty-five total competitors in the group, including seven Class 1500 Unlimited Buggies was a monumental task. Still, Conner was up for the challenge knowing that his Alumi Craft Race Car was well prepared and ready for business. McMullen had a total time on the course of 2 Hours, 18 Minutes, and 24.826 Seconds beating out 2nd Place by over 11 minutes after the combined timing. Which also amounted to being titled the overall winner of the group topping out all other buggies. 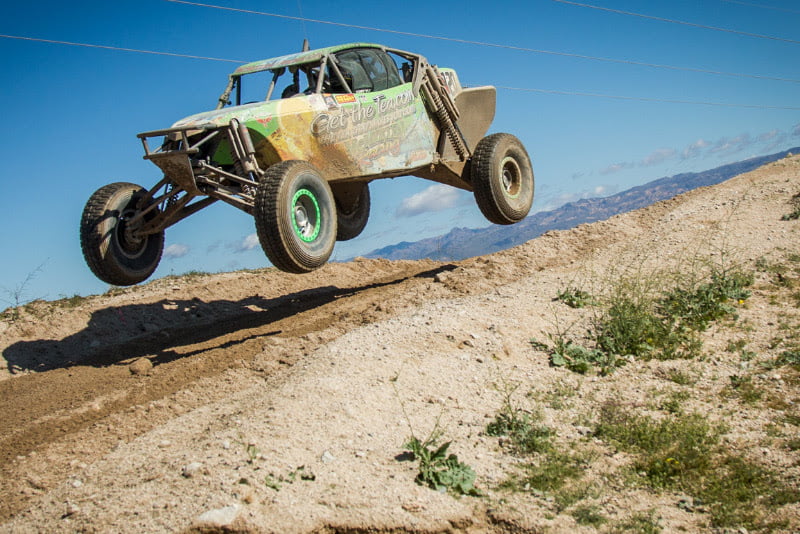 The conditions were trying for the competitors with torrential rain flooding the track Saturday morning, creating pools of water, slick mud and massive holes 4 & 5 feet deep all along the course. “Saturday’s race started with a very frustrating first lap of lakes of water and tons of mud,” stated Kevin McMullen, Team Principle for Kevin McMullen Racing and Owner of Kevin McMullen Racing Fab and Trans. “Trying to pass slower traffic was next to impossible, but Conner was very patient and did exactly what needed to be done. We took our time and worked our way to the front right behind James Dean in the 1500 Unlimited Car and just ran a clean, trouble-free race to the finish. By the end, we had about a 5 minute lead on the next Class 10 Car going into Sunday.” 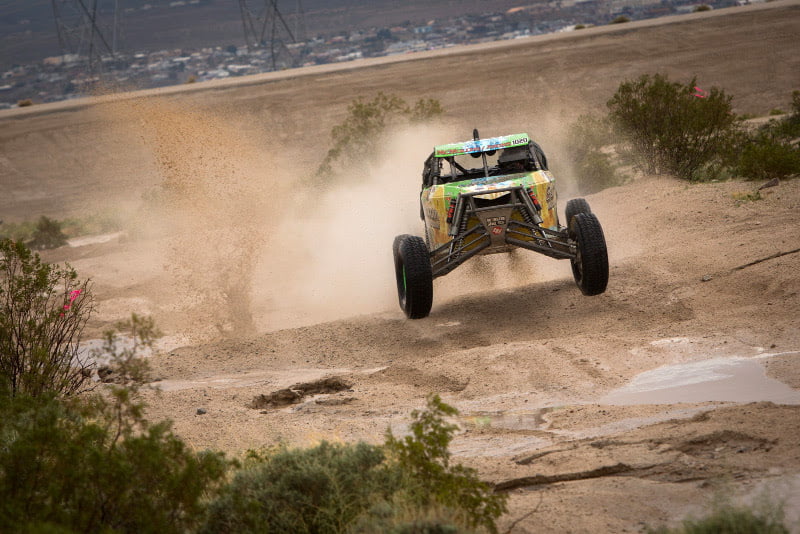 With the wet weather over, and another race win notched in the books for the McMullen Team, it was time to get the car back in order and prepare for another repeat for Race 2.  “Working on an Alumi Craft makes hard work short and uncomplicated,” Kevin continued. “We did all of the usual things to turn the car over and spent about 5 hours trying to get all the water out of the electronics for Sunday’s race. After a thorough prep by one of the “biggest little teams” out there, we felt very prepared to run hard on Sunday to try to get the overall for the buggy classes.” 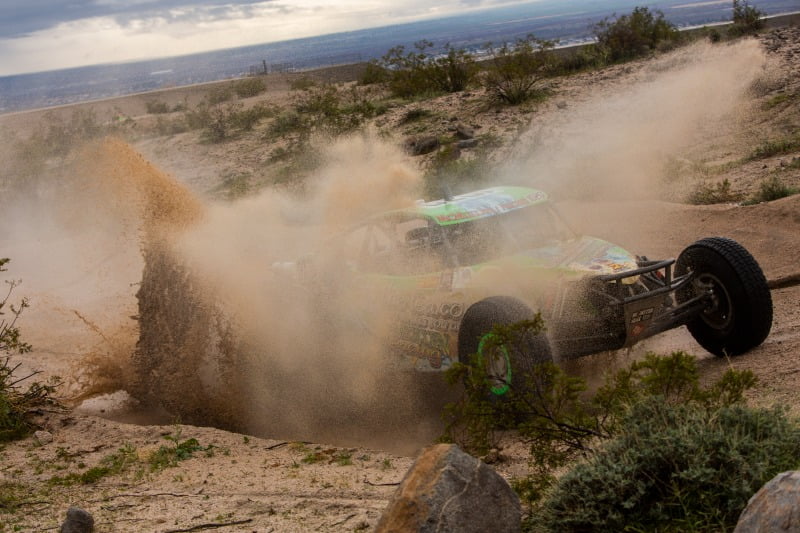 For Sunday’s Race 2, the GetTheTea.com #1020 would line up and take the green flag next to James Dean, the favored Class 1500 Unlimited Buggy and fastest during qualifying. McMullen went on, “We started on the front row, next to Dean, hoping we could hook a tow rope on him and have him pull us around with 800 horsepower. That didn’t happen as Dean suffered from a mechanical and forced to call it. Our race, on the other hand, was good enough for the win! The Alumi Craft was flawless, and Connor drove a smart, smooth race. By the end of it, we had an 11-minute lead on the 2nd Place Class 10 and we were also the fastest of the weekend. 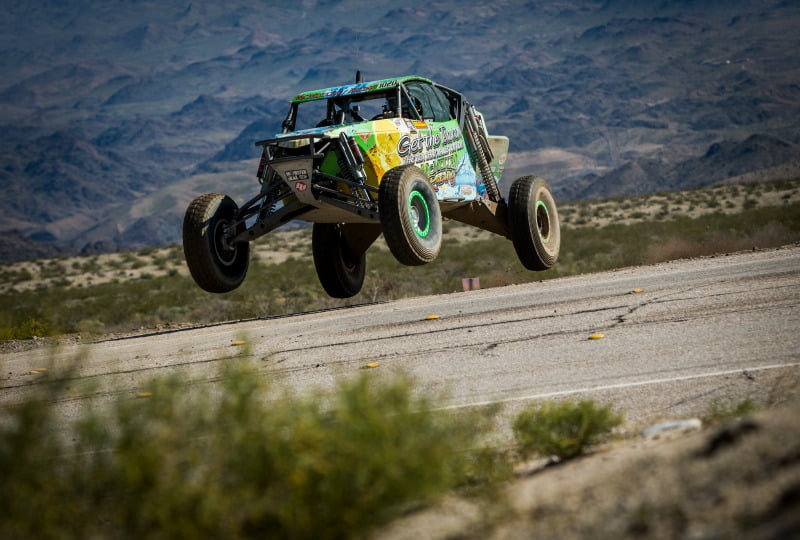 In off-road racing, it is not weather permitting. It is all conditions all the time. Alumi Craft is the top performer and the proven choice of winners as the go-to platform for most reliable in the most grueling and testing conditions. If you are looking to take on a competitive challenge such as desert racing, get in touch with Alumi Craft Race Cars for an expert consultation on what is needed to win races. Give Alumi Craft a call at 619-596-9841 or go to: http://alumicraft.info/ to find out more about our race products and services.