The 2021 SCORE World Desert Championship season opener began with the popular San Felipe 250. The 34th annual running of this event featured a brutal 280 miles of chopped up and whooped out sandy terrain. For RPI Racing’s Shelby & Cody Reid, their brand new Alumi Craft all-wheel-drive Class 1 Buggy happened to be the perfect machine to pick up the win right out of the box. In the Class 10 division, Alumi Craft racers claimed four of the Top 5 and eight out of the Top 10, with Chase Warren capturing the victory. 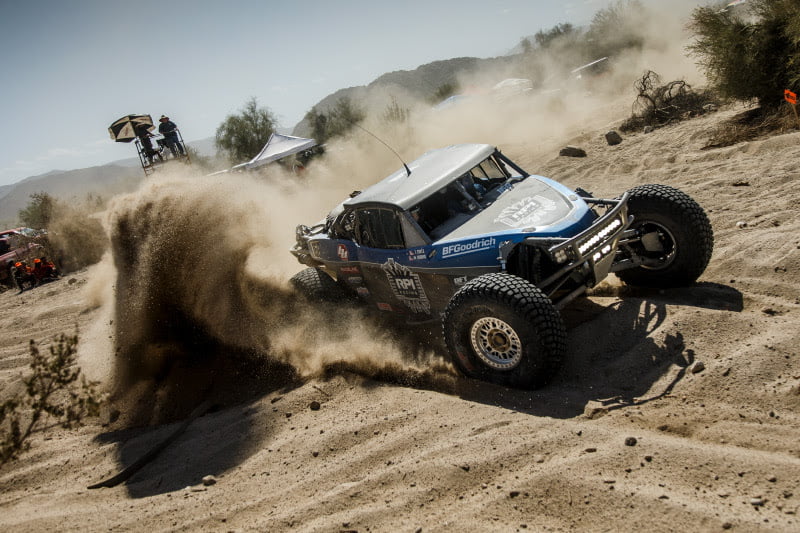 San Felipe is always an attractive destination for racers and spring breakers alike due to its location along the Sea of Cortez in Baja California, Mexico, only 125 miles south of the U.S. Border. For the 2021 event, there were 269 total starters, which is an incredible positive number to see the sport flourishing in these strange times. Eight Class 1 cars started the race and saw six official finishers. The Class 10 buggies saw twenty-three starters and thirteen finishers.

Former Class 1 Champion Shelby Reid shared driving duties with her son Cody Ried, an accomplished racer and Class 10 Champion. They completed the 280.20-mile course in 5 Hours, 17 Minutes, and 9 Seconds, 33 minutes ahead of 2nd place. This was the first race for the newly constructed all-wheel-drive Alumi Craft buggy, which suffered zero mechanical issues and clocked 53.61 MPH average speed. Cody Reid started and drove to Race Mile 158, where Shelby took over and brought it to the finish.

The brand new #168 RPI Racing all-wheel-drive Alumi Craft, nicknamed “Cleopatra” (Queen of the Desert), is a genuine game-changing Class 1 buggy. Designed and assembled by masters of the sport using only the latest and greatest parts, this thing rips and clocked over 150 MPH in a speed run. Armed with a big block Chevy mated to Weddle Albins 6 speed transaxle, Albins front diff, two 42 gallon fuel cells, and all-wheel-drive, pushing 40″ BFGoodrich Tires, it truly is another Alumi Craft built for champions. 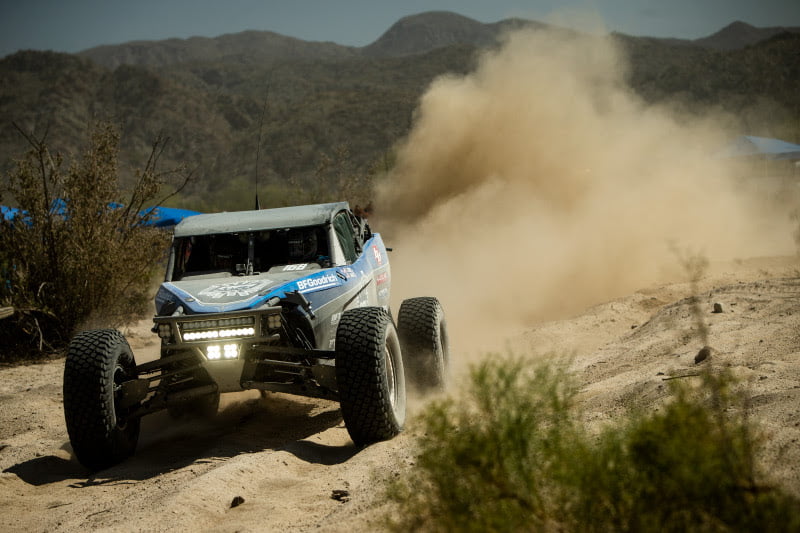 Shelby shared this at the finish line, “We had no problems. Brand new car, very first race, we had nothing go wrong. We did have some GPS issues, but nothing with the car. Besides that, it was a perfect race. You couldn’t ask for anything better. We don’t have a lot of seat time in it. It is an all-wheel-drive and I’ve never driven an all-wheel-drive before, so it took a little bit, but then we got in our groove.”

Team Principal of RPI Racing and husband to Shelby, Kevin Reid, commented, “Our plan for this race [as it was this car’s, and design’s very first race] was to finish. We chose not to qualify to not put the extra miles on it. We wanted to run our race and just start from the back. Cody started the race, and by Race Mile 50 had passed all the Class 1 cars. Cullen got back around him somewhere, but we were literally in his dust coming into Race Mile 158 for the driver change. We took our time at the pit stop, and Shelby left 2 minutes physically behind the 105 car. She stayed right in their dust, driving a very conservative pace until they either had a flat or got stuck. She then went on driving around 60% to the finish and the win. We will continue to develop and tune this car and feel it will be significantly faster at the Baja 500.”

Kevin continued. “John and the crew at Alumi Craft are always great to work with. I wanted to change some things from his original concept for this design. He was receptive and changed his design to accommodate the 40-inch tires and big block motor we wanted to run. It is an incredible machine!” 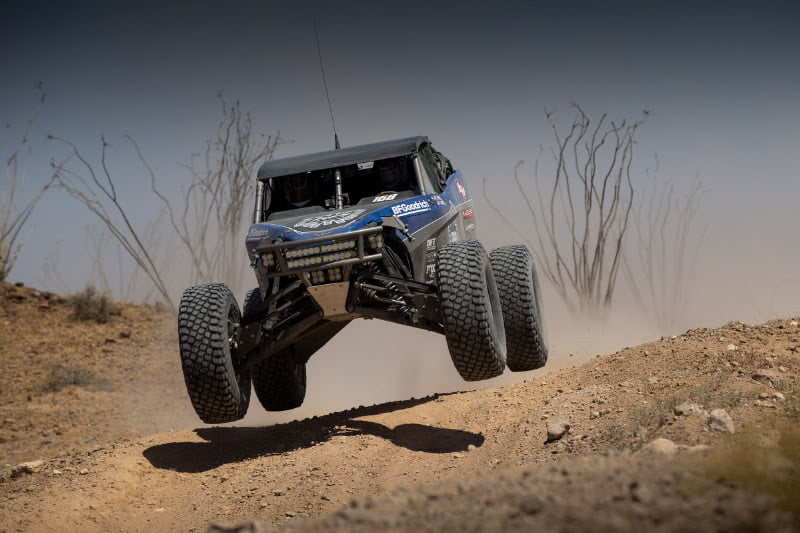 While the #168 Class 1 Alumi Craft had a trouble-free run for the victory, the Class 10 winner #1088 of Chase Warren had a different experience. Finishing 2nd across the line, but 4 minutes ahead on corrected time, Chase spent 5 hours, 43 minutes, and 13 seconds on the course for an average speed of 48.98 MPH. 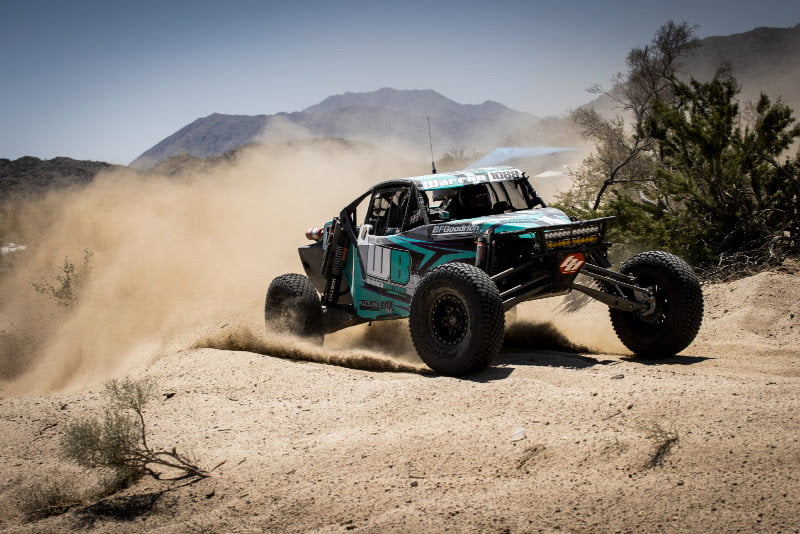 “We had a not-so-great starting position (12th) with lots of fast guys starting near the front,” admitted Warren. “We got off to a quick start and passed everyone taking the lead position by Race Mile 50. There was a lot of dust and so many cars; we weren’t sure whether there were any Class 10 cars left or not. Either way, we continued pressing on and got a slow leaking flat.”

Chase continued, “From then on, we worked our way back up to first on-road and with about 60 miles to go, we got another flat. We made a real quick change of it and after that did everything we could to make up time to the finish. I pushed hard and caught the bumper of the only car in front and chased them to the finish. We ended up beating 2nd place by over 4 minutes on corrected time. There were no issues with the car, and besides the few flats, it was a pretty clean run.”

Chase reflected on his race win, “I love the San Felipe course because it is incredibly rough and has multiple line options that make for unbelievable racing. We have had unfortunate parts failures while leading every race last year and finally got back into the win column. Of the three times we raced in San Felipe, we have had two 1st place wins and one 2nd place after a bottleneck. The Alumi Craft with BFGoodrich tires, FOX shocks, Raceline wheels, and Baja Designs lights can eat up any course thrown in its way and has proven to be the ultimate package. 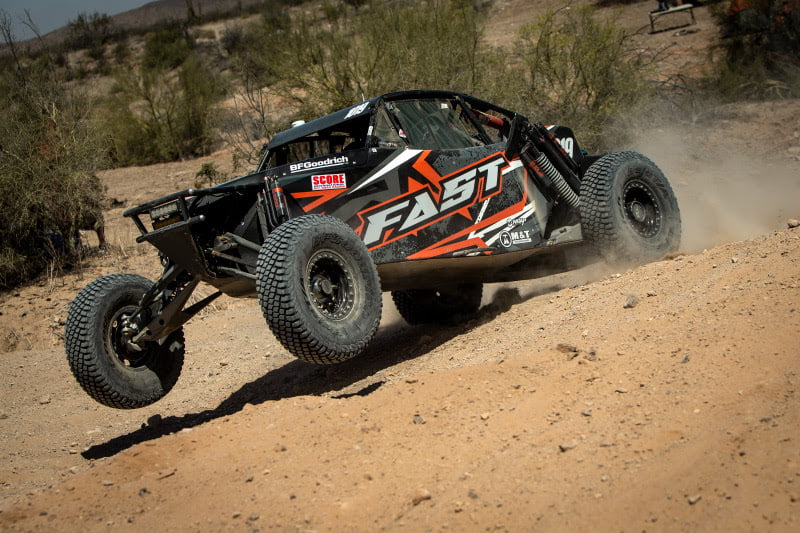 All in all, Alumi Craft Race Cars continue to prove to dominate the competition. It is clear the winner’s circle always has the most reliable equipment at the finish line. If you need a competitive and dependable vehicle capable of winning, call Alumi Craft Race Cars for an expert consultation on what it takes. Give Alumi Craft a call at 619-596-9841 or go to: http://alumicraft.info/ to find out more about our race products and services.