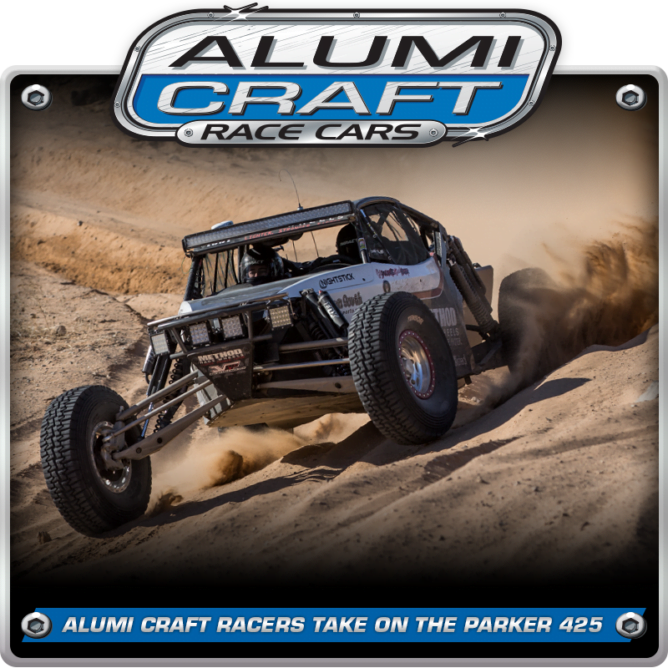 Parker, AZ
Alumi Craft racers kicked off the 2018 season with a tough race at the Best In The Desert series Parker 425. They would do 3 laps on the brutal course, each one more brutal than the last. The Parker course has rocky, hard packed sections as well as deep shifting sand. As the laps go by, the rocks get pulled out of the dirt, and kicked onto the course. The sand is constantly moving, so big holes and whoops develop after only a single lap. It has been very dry in Parker so the course was blanketed with a thick layer of dust that caused several crashes and a lot of flat tires. 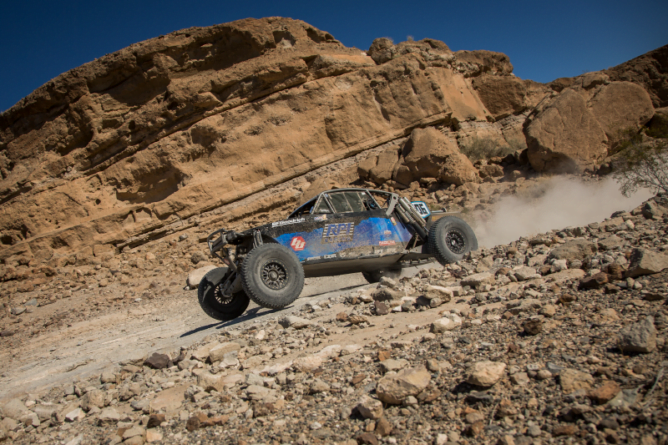 Alumi Craft class 10 cars landed on the podium and took 5 out of the top 10 places. After the year that Brock Heger had last season, it was no surprise to see him right back at the front in Parker. He took the championship title, and Rookie of the Year honors in 2017. Leading on the last lap, the team decided they had a big enough cushion to stop for a driver’s change. They pulled off a quick change but they did not expect such a last lap charge would be put in by the wily veteran Doug Fortin Jr. Fortin went all out to try and beat the defending champion, and took the victory by a razor thin 45 seconds. Heger finished on the podium in 2nd place.

“Parker is always a tough race,” said Heger, “It’s the first race of the season, and the first chance to earn points towards a championship. We got off to a great start; our Alumi Craft was running very strong. Our driver change on the last lap ended up hurting us, but we are proud of our 2nd place finish. I am so proud of our team for all their hard work giving me such a flawless car.” 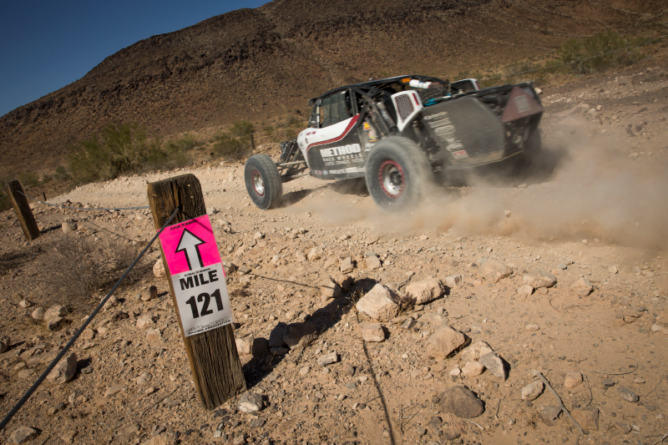 Finishing just off the podium in 4th place was Alumi Craft racer Christian Fessler who put some good points in the bank for 2018. 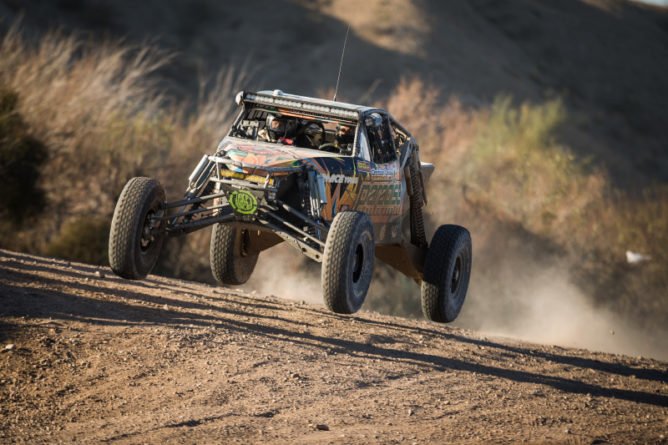 The balance of the Alumi Craft cars in the top 10 finished 6th through 8th in a train. Corey Goin came home in 6th, Baja 1000 winner Cody Reid finished 7th, and Keith Waibel crossed the line one minute later in 8th place. Heger definitely has a target on his back this season. We will have to wait until the Mint 400 to see who will back up their performance in Parker and emerge as the driver to beat in class 10. 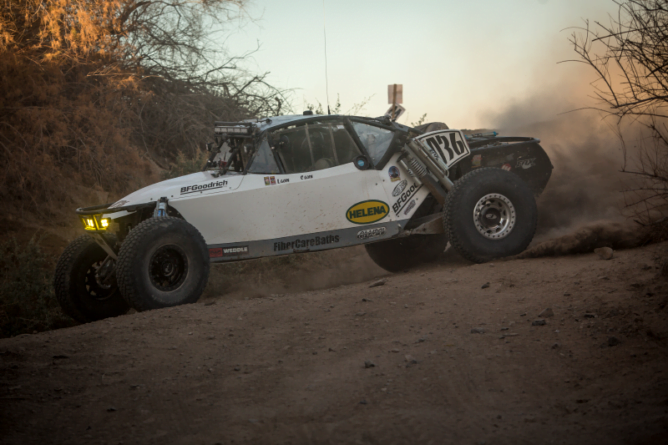 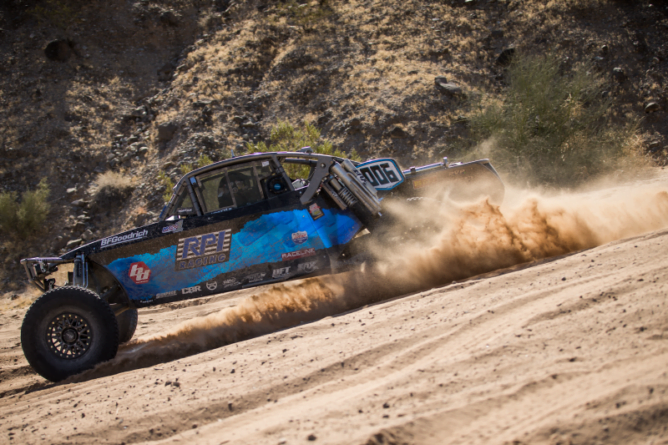 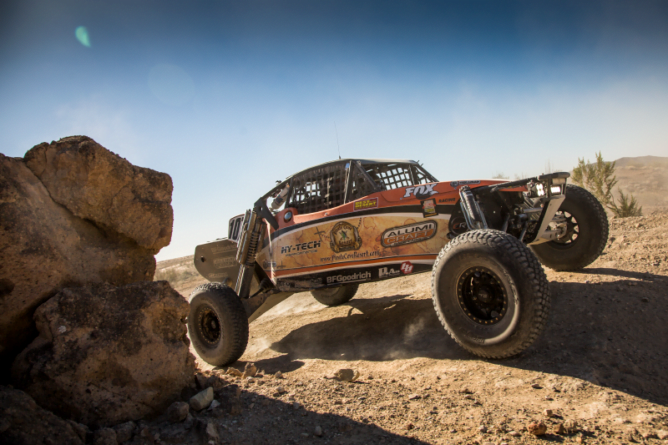 2016 SCORE class 10 and overall champions Raphael Navarro IV, His Dad Raphael the III, and their Pete’s Camp crew, debuted their Alumi Craft class 6100 truck. The truck is very different from the class 10 car they are used to, but Raphael IV loves it. “The course was pretty beat up but the truck was effortless to drive,” says Raphael IV, “It’s amazing how comfortable I felt in the rough terrain. We only ran one lap but I was not fatigued at all.” 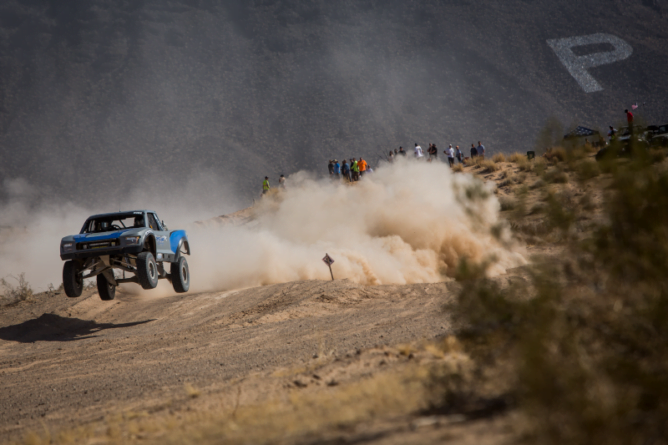 Raphael is very excited about the potential of the truck. During qualifying, he ran the second fastest time, despite limited testing. They were feeling the truck out on the first lap of the race when they heard a knock. As they tried to limp the truck to the main pit, the knock got louder and the engine died. They really don’t know what happened to the engine yet, but it never got hot according to Raphael. That is one of the challenges of running in a crate motor class. You take the engine out of the box and put it in the truck. So much time went into the design of this truck. The engine is the only thing that Alumi Craft and the crew have not had their hands on. Even though they were taking it easy on the first lap, and spent some time limping it towards the pit, they still averaged 55 mph. The class winner averaged only 6 mph faster. “We will drop in a new motor and the rest of the truck is still cherry,” Raphael continued, “It will be a light prep for the Mint 400. Looking at the potential we got a glimpse of at Parker, we are really looking forward to a strong run there.” 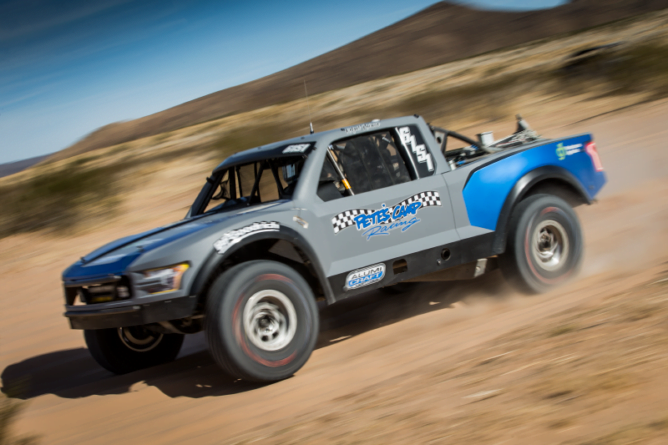 Alumi Craft’s success comes from continuously applying the latest technology into everything they build, like Raphael Navarro’s new 6100 truck. They are constantly testing and tuning and most importantly, they listen to feedback from their customers. Alumi Craft has a long winning record in competition but they also build the most reliable and best performing pre-runners and sand cars available. Regardless if you are doing course reconnaissance, racing for a championship or just having a blast with your friends, Alumi Craft is dedicated to providing you with a fun, safe and reliable vehicle that exceeds your expectations. If you demand the best, give Alumi Craft a call at 619-596-9841 or go to: http://alumicraft.info/ to find out more about our race products and services