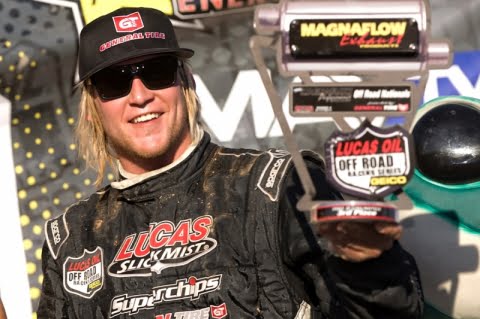 Expectations were high for Robby Woods coming into Rounds 3 and 4 of Lucas Oil Off Road Racing (LOORRS) at Speedworld Off Road Park in Surprise, Arizona. Woods had pulled off a third place finish in Round 1 of racing and was sitting in the top ten in points and looking to advance. The Woods team fine tuned the Lucas Slick Mist / Superchips Chevrolet in the month between races, changing the gearing for Speedworld and revising the front suspension geometry. These changes and Robby’s natural abilities allowed him to qualify second in Pro-2 Unlimited for Round 3 of racing, which put him on the second row in his No. 99 Chevrolet.

The race proved to be a wild one, with the veteran Woods having to focus as much on avoiding lap traffic and rookie drivers as chasing down the leaders in front of him. Half way through the race a wheel came off the truck in front of Robby, leaving him no place to go but over it. “Hitting a large object at speed is about the only way to can damage a General Grabber,” Woods explained. “That forced me into the hot pits for a quick tire change.” Unfortunately, officials thought that the tire change was a bit too fast, and penalized Robby 30 seconds for speeding on the pit road. This discouraging turn of events put Woods a lap down on the leaders, but he was still able to collect valuable season points in his quest for the Pro-2 championship. 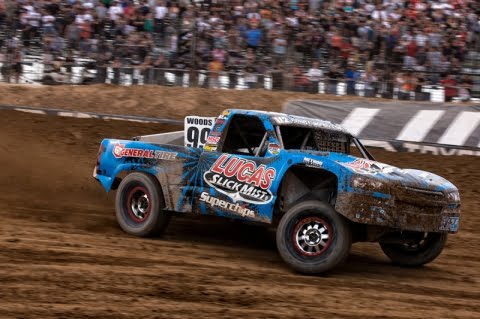 Situations like Robby Woods faced on Saturday are commonplace in top tier short course racing, but what separates champions from the rest of the pack his how they handle adversity. Woods’ talented crew worked diligently on fixing the damage from Saturday’s race while Robby prepared for the next challenge that lay before him: Round 4 of racing on Sunday. More bad news came in qualifying on Sunday when the transmission let go behind Woods’ 900 horsepower Chevrolet race engine. Despite the setback, Robby still managed to qualify sixth and his excellent support crew had the transmission replaced in the No. 99 Lucas Slick Mist / Superchips Chevrolet before the green flag dropped.

After pushing too hard on Saturday and being penalized for it, Robby Woods took a less aggressive approach in Round 4, allowing the competition to succumb to the brutal terrain at Speedworld. Lap after lap, Robby moved forward in the running order, battling with Jeremy McGrath and Bryce Menzies throughout the second half of the race. This brought the sold out crowd to their feet, screaming with excitement at the non-stop action. When the checkers came out, Woods finished less than five seconds behind the winner. This put Robby in third place, on the podium with Rob MacCachren and Jeremy McGrath, distinguished company to say the least. 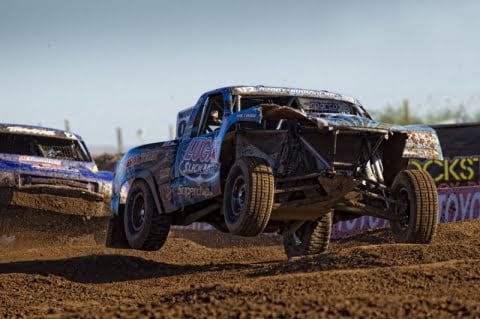 Rounds 5 and 6 of LOORRS racing will be held at the legendary Glen Helen Raceway on May 21st and 22nd. In the meantime, coverage of Robby Woods No. 99 Lucas Slick Mist / Superchips Chevrolet. And the Lucas Oil Off Road Racing Series can be seen on CBS Sports, Speed Channel, Versus, and MavTV. And for the latest information from Robby Woods visit www.robbywoods.com or http://www.facebook.com/robbywoodsracing.

Robby Woods would like to thank the following for their continued support: