Another notch on Peterhansel and Price’s belts 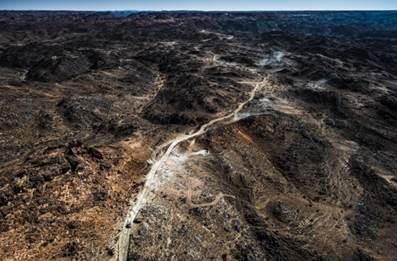 The competitors left Wadi ad-Dawasir this morning to tackle a 759 km stage. They headed due south, initially towards Najran Province for the start of a 375 km special that wove its way around the Wajid and Hejaz plateaus, whose peaks top out at 1,770 masl in landscapes found nowhere else on Earth. In contrast, those in ‘Asir Province have rocky outcrops that jut out from the sand. Two thirds of this fast course were on sandy terrain, following a north-westerly direction leading to Bisha, where the caravan set up camp for two nights before the closing stage. It was enough to break the backs of several machines whose odometers were due to reach 6,500 km today, such as KTM no. 1 (see A crushing blow), but also to crown a new winner with two days to go, such as Peterhansel, who pounced on the opportunity to grab his 49th special in a car.

Just like in Stéphane Peterhansel’s Audi, sparks are flying at the summit of the motorbike race, which is still wide open. Today’s special, won by Toby Price, turned the competition on its head despite failing to create large gaps. Adrien Van Beveren put in a gallant performance to seize the overall lead, but this honour could be a poisoned chalice because it gives his direct rivals for the title, Pablo Quintanilla (+ 5′15″) and Sam Sunderland (+ 5′59″), the advantage of starting further back. Having no choice but to go on the attack, the Yamaha biker will find himself in charge of opening this sandy stage soon after starting in third place. This is bad news for the Frenchman, who will have to pull a rabbit out of his hat to keep his foes at bay. To make matters worse, his rivals’ interests are increasingly aligned. For example, GasGas, KTM and Husqvarna are all racing under team manager Jordi Viladoms. The future seems more certain in Toyota and BRX’s paddocks, Nasser Al-Attiyah and Sébastien Loeb’s home away from home. 33 minutes separate the top two drivers in the car standings, but the Frenchman only managed to cut the deficit by 1′25″… At this rate, the only way that he is going to overtake the Qatari is if the Dakar goes on until mid-February! Behind this duel at the summit, the battle for stage wins rages on. The Audi RS Q e-tron cars have had an impressive campaign so far and even landed a few specials. After Carlos Sainz and Mattias Ekström, today was Stéphane Peterhansel’s turn to get a taste of success. It was his 82nd career win, but only the first in a hybrid 4×4. Quad rider Pablo Copetti’s engine troubles mirrored those of KTM’s Kevin Benavides (see A crushing blow) and cleared Alexandre Giroud’s path to victory in the general standings, which he now leads by 2 h 36. “Chaleco” López is only marginally less comfortable at the top of the T3 classification. The Chilean continues to make good progress without breaking a sweat thanks to his margin of just under an hour over Sebastian Eriksson, unfazed by American prodigy Seth Quintero’s tenth stage win of the year. 22-year-old Lithuanian Rokas Baciuška, close in age, is making his Dakar debut in the SSV category… and claimed his first special. Austin Jones has yet to open his account this year, but with 11′54″ to spare over Gerard Farrés, he is the odds-on favourite to take the title. Dmitry Sotnikov and his truck are fighting on every front. The Russian’s fourth stage win increased the size of his overall lead to ten minutes or so over Eduard Nikolaev.

Seth Quintero’s 10 stage wins in the T3 race are the talk of the town, but a fierce battle rages on behind the American. Dania Akeel is one of his rivals. One of only two Saudi women in this edition, together with Mashael Alobaidan, she is a fast-learning prodigy… which is not surprising! Two years ago, the Saudi Federation invited her to the Dakar and she jumped on the opportunity to surf a couple of dunes at the wheel of a car. That left her hungry for more and instilled in her the ambition to enter the toughest rally raid on Earth. She signed up for the World Cup for Cross-Country Bajas in the T3 category, which she won on her first attempt in a Can-Am. Her feat earned her a ticket to the 44th Dakar. Sixteenth in the opening stage in her birthplace of Jeddah, she scored her first top 10 finish in stage 4. Two specials later, she was sitting in sixth place overall as the second top-ranked rookie, behind Sebastian Eriksson. Unfortunately, her rise was cut short by a stroke of bad luck in stage 7, when she was hit by a mechanical in the finale and lost over four and a half hours fixing it. Akeel, paired with a former Olympian, Sergio Lafuente, did not give up. After coming in 13th and 14th in the next two stages, today she posted her best Dakar performance yet with an impressive 6th place, just under 22 minutes down on Quintero. Without that twist of fate in stage 7, she would probably be in the top 5 of the lightweight prototype classification right now. Not to worry: her goal of finishing the race seems increasingly within reach and, in the meantime, she will continue to blaze a trail for other Saudi women in rallies.

The Dakar has given Kevin Benavides a hard time more than once. His trials and tribulations go a long way back. After his breakthrough performance in fourth place in 2016, he saw victory slip through his fingers in the closing stages of the rally several times before finally tasting glory in January 2021. This year, his title defence got off to a very wobbly start with a 36-minute loss in the opening stage, but the Argentinian made a show of talent and resolve to force himself back into contention. He started the special from Wadi ad-Dawasir to Bisha in fifth place overall, 10 minutes behind then-leader Matthias Walkner, with a viable path to the top of the leader board. Then, disaster struck when his KTM gave out on him at km 133. “Se rompió el motor”, posted the devastated biker from Salta on social media right after a broken engine spelt the end of his comeback story. He will have to try again. 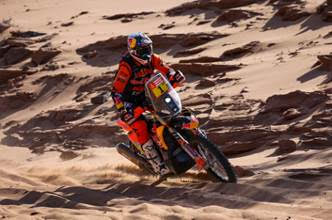 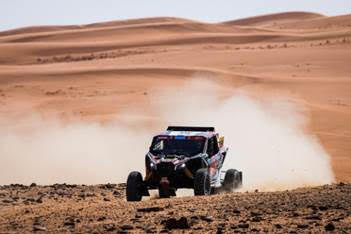 Did you know that Rokas Baciuška, the youngest Lithuanian Dakar entrant in history, clinched his maiden win in the SSV category today? He joined the ranks of Laisvydas Kancius, who claimed stage 1B of the quad race ten days ago, and Vaidotas Žala, who took the opening special of the car category in 2020. Lithuania is in awe of the Dakar. As Baciuška likes to point out, in a country of three million people, everyone knows someone who has raced in the Dakar. In perfect sync with his co-driver Oriol Mena, who made his name on two wheels, since the Rallye du Maroc, Baciuška is driving his Can-Am as part of the 10-strong Lithuanian fleet. Not counting Andorra, which is home to 78,000 inhabitants, Lithuania has the highest ratio of Dakar entrants to its population (2.7 million). Vaidotas Žala, just outside the top 10 (12th) in the car category, and Vaidotas Paškevičius, eleventh in the truck care, are also doing their country proud.

In the T1 World Championship, Sébastien Loeb is taking advantage of Al-Attiyah’s somewhat cautious approach to bag one batch of 5 points after another. 5 points is also the difference in favour of the Frenchman, who has a total of 37, in the ranking. Przygoński claimed his first second-place finish in the Championship to pull level with Serradori, who only scored a single point. Lucio Álvarez expanded his gap to these two with an extra 2 points in his bag.

In the T3 competition, Quintero took his tenth stage win, but the spotlight was on the women thanks to Cristina Gutiérrez’s second place among the W2RC entrants and Saudi Dania Akeel, who opened her account.

In the T4 championship, Lithuanian Rokas Baciuška landed the biggest W2RC haul of the day and is now neck and neck with Pole Aron Domżała in 5th place, with 19 points apiece. Michał Goczał benefited from his brother’s troubles to snap up 3 points and pull closer to him. He is now second with 30 points, one fewer than Marek.

In the T5 competition, Macík outperformed Koolen and Vratný in the fight for championship points for the sixth day in a row.

Finally, in the motorbike category, Quintanilla and Barreda (Honda), Sunderland (GasGas) and Walkner (KTM) look set to get their hands on the first points of the 2022 season with two days to go. Four men, three brands —the game is on. 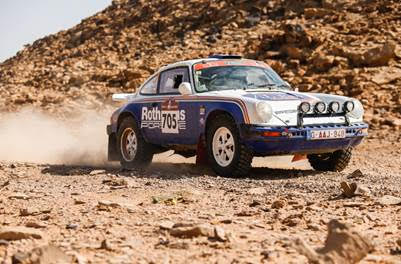 Reigning champion Marc Douton looked forward to his first stage win as he waited for the entire Dakar Classic caravan to roll into the bivouac yesterday, only to be undone by another Porsche driver, American Amy Lerner. Today, he and his co-driver were back on track and showing the level of consistency that propelled them to victory last year with a third-place finish in the stage. He now sits in 10th place, but leader Serge Mono commands such a big margin that, even though he only finished fifteenth today, it is almost a pipe dream to imagine Douton catching up with him. The difference to the rookie is a whopping 344 points. The Euvrards are 188 points behind after making a strong impression in the opening stages. Jesús Fuster Pliego, who has already taken two stage wins in this edition, is almost 300 points down after finishing twelfth today. Five top 5 finishes, including two runner-up’s spots, show how the Mogno-Drulhon duo are betting on the

quintessential factor of the race that they have entered in sunny Saudi Arabia: consistency. The two rookies are pulling off the small feat of beating a field with several renowned specialists at their own game. They can rely on their Toyota HDJ 80, the gold standard of desert racing, to bring it home.

The Yamaha biker has seized the overall lead, but he remains apprehensive about his less-than-ideal starting position in tomorrow’s decisive stage. He has a margin of 4′15″ over Pablo Quintanilla and 5′59″.

“I rode at my pace, trying not to get lost. At the last minute, I had run the calculations and it was looking great for tomorrow, starting a bit towards the back, but they put a team strategy into play. The problem is tomorrow will be a sandy stage and, when you leave the track for others to follow, they can gain a lot of time on you. I know KTM, GasGas and Husqvarna will race as a single team, and Honda has four fast bikers. Unfortunately, Andrew was not as good as I was today, so he won’t be able to help me out. I’ll be on my own, it’s up to me. I don’t know how it’s going to work out, I love leading from the front. We’ll give it our best. I might be the only one without a strategy, and maybe it’ll work out just fine. Maybe it’ll make our dream come true.”