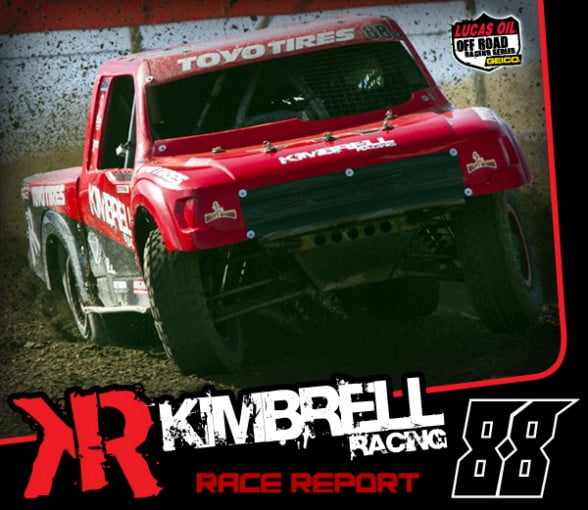 Austin Kimbrell and his dedicated crew put in another solid effort at rounds 11 and 12 of the Lucas Oil Off-Road Racing Series (LOORRS). The LOORRS shortcourse event was held at the new Wild West Motorsports Park outside Reno, Nevada. This brand new 1.2-mile track that climbed and dropped with the rolling hills, promised to deliver door-to-door racing at top speeds. The imposing track was filled with long straits, big drops and tricky turns. Turn four, Austin’s favorite, had a nice radius but dropped in elevation, which made it similar to the famous corkscrew turn at Laguna Seca. If the reaction from the jam-packed stands were any indication, Austin wasn’t the only one who liked turn four. Getting the track dialed in would be the same challenge for all the teams and drivers.

After the first qualifying session, the Kimbrell Racing team and driver Austin Kimbrell were not happy with the performance of their FiberwerX, Ford Raptor bodied, Method Race Wheels, ProAM, Hughes Performance, Rusty’s Off-Road Products Pro Lite. Their off the shelf Toyo, Open Country M/T tires were hooking up with their usual tenacity so they made a gear change in hopes that it would help pinpoint their issue. They were right, it did. Unfortunately, it wasn’t the gear ratio that was to blame. After countless hours of practice, testing at the limits and 10 rounds of racing, the normally potent Dodge powerplant was sour. It still ran smooth and sounded great but it was down on power. When you are racing against talented drivers like Brian Deegan, Casey Currie, Chris Brandt, Bradley Morris and the other 14 or 15 in the field who are equally as hungry, the tiniest of details can make a huge difference. Just a five horsepower loss can drop you to the back of the pack. 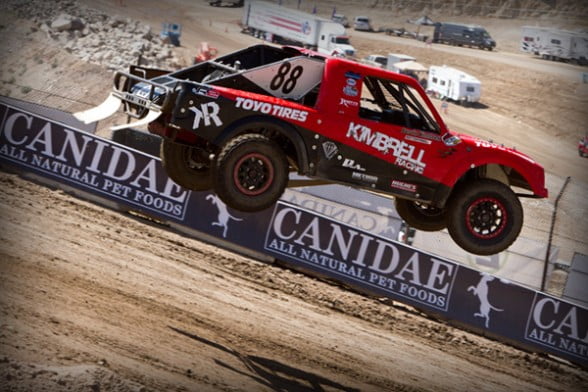 Without wasting a minute, the crew swapped out the engine and had the truck ready for their brief test and tune session the following morning. The minute he hit the track, Austin knew the truck was back to the same performance he had when he won the first round of racing in 2012. It was awesome to win their first race with this truck. With few set-up notes and limited testing on this chassis, they pulled off an impressive win. Kimbrell Racing is not new to winning, the family based team racked up loads of victories in the UTV’s and Superlite before committing to an entire season in Pro Lite. Now, with a good chunk of the Prolite season behind them, every race, every new track, has given them even more knowledge in the bank. 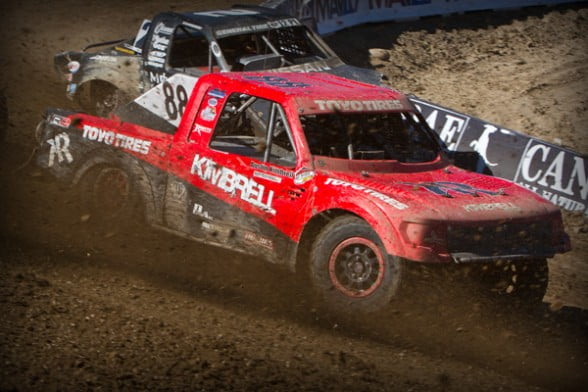 “We take pride in learning first hand,” said Austin, “I do all the prep on the truck before a race. On race weekends, I have help from my crew chief Jimmy Owen and my Dad, John. They make the strategy calls and do some wrenching but I’m still involved with the mechanics. We have a detailed system of documenting what we do to the truck, how the changes affected the handling and what the track conditions were like. We are always working on speed but we think it’s just as important to be consistent. We have not seen too many podiums this year but we are solidly in the top four in championship standings due to our consistency. It’s not easy when you are racing against teams with more experience and bigger budgets but that’s not going to slow us down. On the track, shortcourse racing is all about keeping momentum. We know we can win; we just need to continue building momentum as a team.” 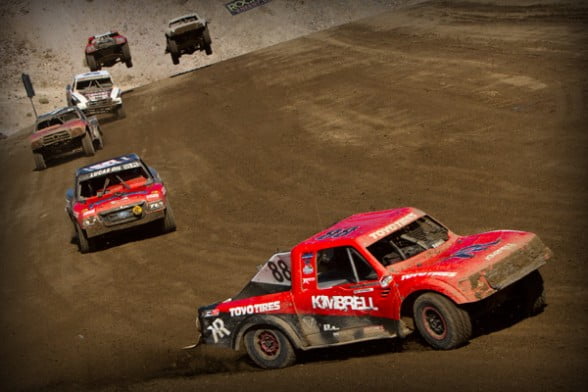 Kimbrell Racing next heads to Las Vegas, Nevada for rounds 13 and 14 on September 22, 23. “I really liked the Reno track but Vegas is my all-time favorite,” says Austin, “That track really flows.” With the truck running stronger than ever, the team is poised to maintain their string of consistent results as they compete in Las Vegas and then head to the final race on October 27th at Firebird Raceway in Chandler, AZ.

About Austin Kimbrell
Austin Kimbrell is forging a name for himself in the highly competitive Lucas Oil Off-Road Racing Series. After racking up a string of impressive victories and podium finishes in UTV and SuperLite competition, Austin is throwing down with the top names in the sport racing in the Pro Lite Unlimited truck division. He is well versed in mechanics doing all of his own work and meticulously preps his truck for each race. A talented athlete, he earned two State Hockey Championships in high school but gave up banging the boards to bang fenders instead.