Price and Al-Attiyah, a sure bet 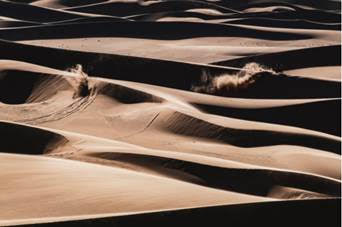 Altitude has very little effect on the temperature in Saudi Arabia. The riders and crews competed for most of the 403-km special at approximately 1,000 metres above sea level, but the vast plateaux that stretched out to the horizon did not provoke vertigo like the mountains can. However, the wind that continues to gust over the region particularly transformed the dunes dotted about the first part of the route into steep steps that caught out a number of competitors. As it blew over the desert, it also removed any traces that may have pointed to the existence of tracks, sowing the seeds of doubt in the minds of many navigators, including the co-pilot of Carlos Sainz, who went round in circles a little too much on the Wadi to Wadi loop. 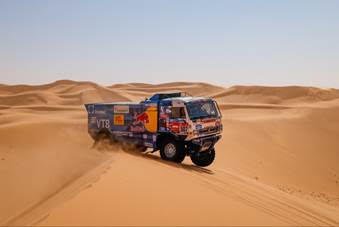 Today, the masters of the disciplines asserted their talents, such as Toby Price coolly displaying that no two days are alike to claim a second stage success this year. Despite all that, it is one of the emerging talents in the category, American Skyler Howes, who is proving to be the most consistent, taking the lead in the general standings after having completed the last Dakar in 9th position. When seeking references in consistency, look no further than Stéphane Peterhansel and Nasser Al-Attiyah: the two duellists have already opened up a significant gap on their closest pursuer, Mathieu Serradori, who trails them by 26 minutes. Meanwhile, Carlos Sainz lost half an hour today, which amounts to twice the deficit conceded by Sébastien Loeb, who now finds himself 45 minutes behind “Peter”. “Chaleco” López, another Dakar die-hard, increased his lead in the lightweight vehicle category by winning the 15th stage of his double-discipline career. In the truck race, Kamaz driver Dmitry Sotnikov is still the boss, even if Siarhei  Viazovich picked up a second stage victory this year with his Maz truck. Lastly, Argentinean Nicolás Cavigliasso reacquainted himself with success and moved to within 6’41’’ of Giovanni Enrico, the rally’s quickest quad so far, by picking up his first stage win of the year

Henk Lategan posted the second best time on the special and sprang a surprise in the Saudi desert by putting several of the category’s established protagonists in the shade. Following an initiation in the basics of rallying in South Africa alongside his father Hein, he was also destined to drive. Following a spell on the Monte–Carlo Rally during which he was able to test himself against his idol Sébastien Loeb, the current South African cross-country champion has not taken long to achieve his first stage podium finish on the Dakar. The 26-year-old South African, a team-mate of Giniel de Villiers in the Toyota Gazoo Racing team, is accompanied in his Hilux by Brett Cummings, a former Original by Motul biker, whose navigational skills are likely to have contributed to today’s result. To cap it all, thanks to this performance, Lategan, the leading rookie in the general standings, now occupies 7th place… just behind his hero Loeb!

Until a competitor crosses the finishing line, anything can happen and today Bernhard Ten Brinke gave an unfortunate illustration of exactly that. Lying in fourth position at the penultimate time check point, the Dutchman had less than 50 km to cover when an accident completely crushed his hopes. After rolling and damaging his Hilux, Ten Brinke initially hoped to gain help from another competitor, before eventually resigning himself to waiting for his assistance team. The hours lost on his return to Wadi will deprive him of any hopes of a final podium place, which he could legitimately have aimed for… had he driven a perfect race!

With his third special stage success of the year, including the prologue loop near Jeddah, Nasser Al-Attiyah now boasts a total of 38 victories. With such a score, he again moves ahead of his rival Carlos Sainz in the Dakar history books, this time for the number of stage wins in the car category, though it remains to be seen whether he will exceed his number of titles. This morning, the Qatari was faced with the tough task of opening the way, but he skilfully avoided the navigational pitfalls. Despite his three victories this year, Al-Attiyah is still a certain distance behind Stéphane Peterhansel who has 47, three less than the record holder in the category, Ari Vatanen (50 stage triumphs). 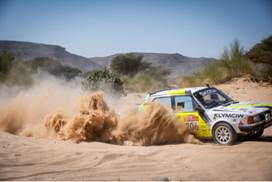 Not so long ago, Ondřej Klymčiw and Petr Vlček took part in the Dakar on motorbikes and obtained their best respective results in 2017 (12th) and 2020 (38th / 4th in the Original by Motul category). This year, they are sharing the cockpit of a Škoda from the early 1980s, which is proving to be particularly at ease on the sandy tracks of Saudi Arabia. 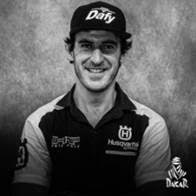 Xavier de Soultrait: “We enjoyed it a lot”

The brand new Husqvarna rider posted the 6th best time of the day and is now on the provisional podium in the general standings, 1’28’’ behind Skyler Howes.

“Again, it was a good day. We are quite good friends now, all the top riders, and I rode with some of them. We enjoyed it a lot because this year the Dakar is very nice to ride. The tracks are not dangerous. Sometimes it’s slow, sometimes it’s fast. It’s not boring at all and we can enjoy riding our bikes at the maximum. Again, it was a lot of work this year, because I needed to find a solution to ride again and I am very happy to have this result with this new Husqvarna”.