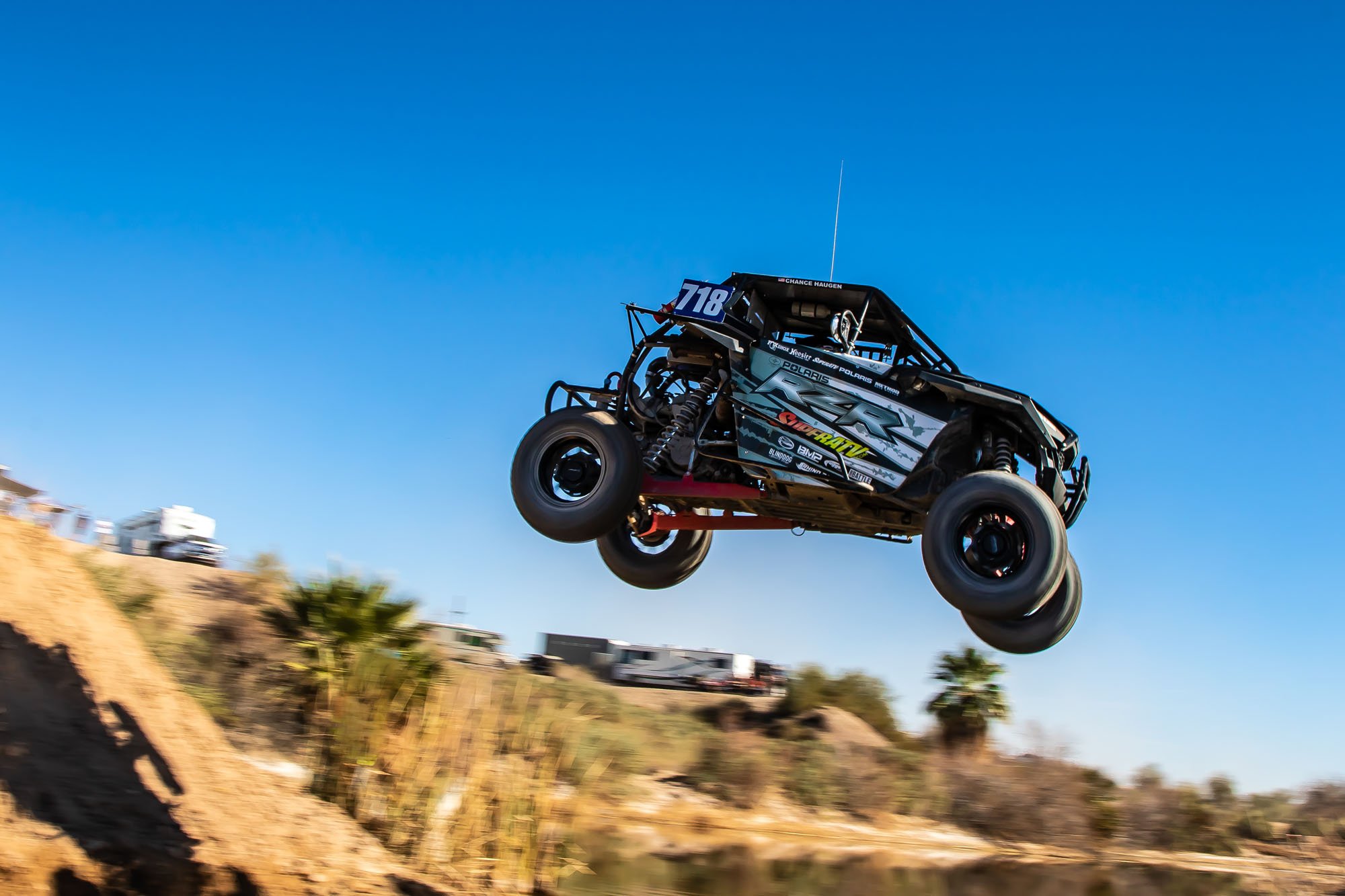 AZOP Racing Rowley White RV Series presented the Havasu Havik Grand Prix for the second round of the 2021 season located next to Crazy Horse Campgrounds. The track featured an enormous tabletop immediately after the start line, through the well-groomed infield and down along the beautiful shoreline of Lake Havasu to the infamous Lagoon Jump.

The Pee Wee quad and bike classes were up next taking on the same shorter course as the 170cc UTVs.  On Pee Wee Quad, Tyler Wade’s consistency brought home 1st place with a 45 second lead over second both days of racing. On Saturday, the Gehrts earned 2nd and 3rd place with Zane Gehrts (#89) and Cutter Gehrts (#200) respectively. Like the quads the Pee Wee Bikes ended with the same winner both days of racing. Tanner Sutton (#51) from Williams, AZ took the top podium with a near minute and half lead on Saturday, and a minute lead on Sunday. Shay Anderson (#45) placed 2nd on Saturday and Ryland Stowell (#6) placed 2nd on Sunday. For 3rd place on Saturday the trophy went to Ryland Stowell, and Ryder Wermes (#155) on Sunday.

Mini Bikes and Pull Starts were up next. John Smallhouse (#188) on his Husqvarna took won 1st place both days of racing. The Mini Bike race was a close one both days with narrow 80/100th sec. lead for first. Tristan Andrade (#048) placed 2nd on Saturday and Kaden Greenfield (#926) on Sunday. Coming in 3rd was Eddy Panuco (#213) on Saturday and Sunday. Everyone’s good time, the Pull Starts, raced at the same time on the same course. Barry Miller (#522) earned 1st on Saturday but fell to 2nd on Sunday to John Rudell (#340). Jeremy Newton (#28) earned multiple podiums each day. Newton placed 1st in Pull Start class on his ATC 3-Wheeler and followed up podium positions in Bike Bigs both Saturday and Sunday.

To everyone’s excitement, the Big Bikes were due next on the start line. Saturday’s huge turnout with 88 entries did not leave much room for error going down into the first turn before the huge tabletop. The start of the Big Bikes the infamous Lagoon Jump was now open with the option to take detour around for the faint of heart. Both days kept all three podium positions in Lake Havasu City. Shane Logan (#042) raced to the podium each day for a quick 1st. Saturday, Alex Morgan (#531) took 2nd while Jeremy Newton (#28) placed 3rd. The following day Newton pushed himself forward to 2nd place over 3rd place David Fullmer (#080).

Before the last of the UTV classes, the Big Quads and Trikes had their chance on the track with the Lagoon Jump being closed off. Ian Sessions (#27), Travis Tarno (#505), and Ron Suor (#102) battled it out for podium each day. Sessions pulled off 1st over Tarno on Saturday by very narrow lead. Suor was not far behind placing 3rd. On Sunday Tarno reversed rolls on Sessions with an even narrower lead for first than the prior day. Again placing 3rd was Suor. In the Trike class, Ed Hicks (#208) came in 1st and Paul Airey (#71) came in 2nd both days of racing.

The UTV 570cc was next to the line. On Saturday when the 570s took off, the first line bottlenecked around the first turn immediately causing a rollover. Ultimately Braden Krah (#147) won 1st on Saturday and Sunday. Ryan Bedoya (#14) was a remarkably close second on Saturday and held his position the following day. Lucas Johnson (#557) took 3rd on Saturday but fell to Victoria Leaming (#721) on Sunday.

For the final and for many the most exciting race was the big UTV races. 19 UTVs lined up on Saturday to challenge the same course that had been abused by the earlier races. The Lagoon Jump was open for this race, and only a couple braved the long jump. UTV Pro N/A driver Robert Grimes (#995) fought long and hard against Zach Timonen (#156) and the speed demon Chance Haugen (#718). Grimes overcame his challenges and won 1st on both days. Timonen placed 2nd on Saturday and did not enter Sunday’s race. Haugen placed 3rd on Saturday, moving up to 2nd on Sunday.

As always, the AZOP Racing Rowley White RV Series would like to thank RideNow Motorsports, SinFab Racing, Rowley White RV, and all its sponsors, staff, volunteers, racers, and spectators for making this another great race weekend.  For complete race results and upcoming events visit www.azopracing.com.