Over 60 American dirt bikers, one charming Spaniard and a crew of 15 just returned from a 4 day odyssey on the Northern Baja coastline to “give back” to the community in a gesture of gratitude and sincerity. For the children of Rancho Santa Marta Orphanage in San Vicente, every one of the BAJA BEACH BASH riders is a hero just for showing up to say hi. Behind the scenes though, the relatively huge cash donation is a well needed lifeline to getting these kids prepared for secondary school as they reach their later teen years.

Every July for the past five years, the BBB crew rides through the gates of San Vicente’s Rancho Santa Marta Orphanage to deliver generous donations of cash and essentials, not to mention the biggest prizes of all: smiles on all faces of the many children who call Santa Marta their home. This years gift: $32,020.00 USD.

The brainchild of Johnny Campbell, Cameron Steele and Tim Morton, the BAJA BEACH BASH was designed to share the BAJA magic with off roaders looking to make a difference for the kids while having the times of their lives competing in special contests and ripping through some of the more remote and less traveled single track trails hidden in the shadows of the BAJA 1000 course. Mission accomplished.

It’s a scene to behold to see a pack of 60 dusty dirt bikers crossing mountains, valleys, beaches and canyons to reach the orphanage for the ‘big day’ and according to RSM directors Bill and Kay Laurence, “It’s a day the kids look forward to each year.” We learn that it’s the smallest things that some of us might take for granted that lead to the biggest boost for these lucky kids. Many of the children of RSM were previously neglected, abandoned or in some cases rescued from uninhabitable circumstances.

“We love the Baja and especially love to share her many secrets with fresh fish”, explained BBB co-founder Cameron Steele at the presentation ceremony Friday, “But there’s nothing better than putting smiles on faces of these kids.” The Steel family’s relationship with RSM spans more than 2 decades and Cameron’s addiction to helping the orphanage has manifested into huge donations. This year, through months of effort, he rounded up more than $32,000.00 in cash donations and matching funds to directly from sponsors and donors. Among the most generous are Bullet Proof Diesel’s Ken Neal and Jesse Jones.

Among the several unique features of the BBB besides the custom trails are the daily special tests:

The Circle Race takes place on the beach around 50’ diameter sandy circuit where 4-6 riders start in staggered positions from a dead start. Each rider who is passed is eliminated until there is only one. In the final, it came down to Destry Abbott versus Johnny Campbell and, after and excruciating battle Abbott held his first ever BAJA title.

The “Foot Down” competition is a trials type contest where riders must stay on their foot pegs while riding in a virtual mosh-pit confined within an 80’ square corral. When riders touch the ground, they are eliminated and become stone statues, creating an obstacle course for the remaining entrants. It ends up becoming a medieval joist-fest as the best riders balance themselves while trying to force opponents to “foot down”. Again Destry Abbott fought hard but it was Quinn Cody who owned the corral in the end.

Then there is the big one: The hill climb title is a multi-day progressive elimination where, each day Cameron and Johnny pick a steep hill to climb. Call it the “Widow Maker” of Baja, with the climbs getting harder each day until the final.  This year was crazy and it came down to the final 4: Johnny, Quinn, Chilly and World Trials Champ & X-Games gold medalist Laia Sanz.

The BASH crew rode out to a dry waterfall formerly known as Chilly’s Challenge from the first BBB in 2009. It’s hardly ridable going down and seemingly impossible going up. The final 4 played “rock, paper scissors” to determine the running order while the BASH crew took their spots lining the walls of the narrow canyon. Up first was Quinn who made it up the 18’ waterfall on the first go and then pig dogged his 310 up the unstable hill climb, spewing rock and dust onto the gallery. After five minutes he reached his mark.

Next was Laia, who owns handfuls of World Trials Championships, 3 DAKAR finishes and X-Gold. Her trials experience showed as she surveyed and previewed the climb beforehand, which is customary in her primary discipline. This paid off as she “swooped up” the solid rock face to the sound of the screaming gallery before lining up her borrowed ROCK STAR ENERGY JCR CRF 450x for a final climb towards Quinn’s marker. She did it with over a minute to spare, thus schooling over 50 “boys” and staking claim to the newly dubbed hill-climb known as “La Conquistadora”, according to Enduro 360’s Chilly White, who wisely conceded after Johnny faltered on his attempt.

When she flew to California last week to attend the ESPY’s, Spain’s Laia Sanz had no idea she would take a constellation prize and venture south to discover and literally conquer Baja’s pristine coastline. So much for the “glass ceiling” and the gender gap as “La Conquistadora” Sanz broke through the altitude barrier to win the seemingly impossible hill climb final. Video can’t do this scene justice, as only those 50 in attendance will attest: you had to be there. It all culminated in a secluded canyon only 200 meters away from the typical BAJA racecourse.

The big picture for this new “Queen of the Bash” is that she didn’t win the popularity contest known as the ESPYS, so she went straight to the border to taste the BAJA magic and actually earn the title, which she may in fact hold more personally dear. She will stay in California training for Enduro-X with Johnny Campbell Racing for whom she will represent in August. The charming Spaniard made a touching acceptance speech after the final and finished by saying, “It was very special for me to share these moments with all of you.” Needless to say, she just picked up at least 75 new loyal fans. 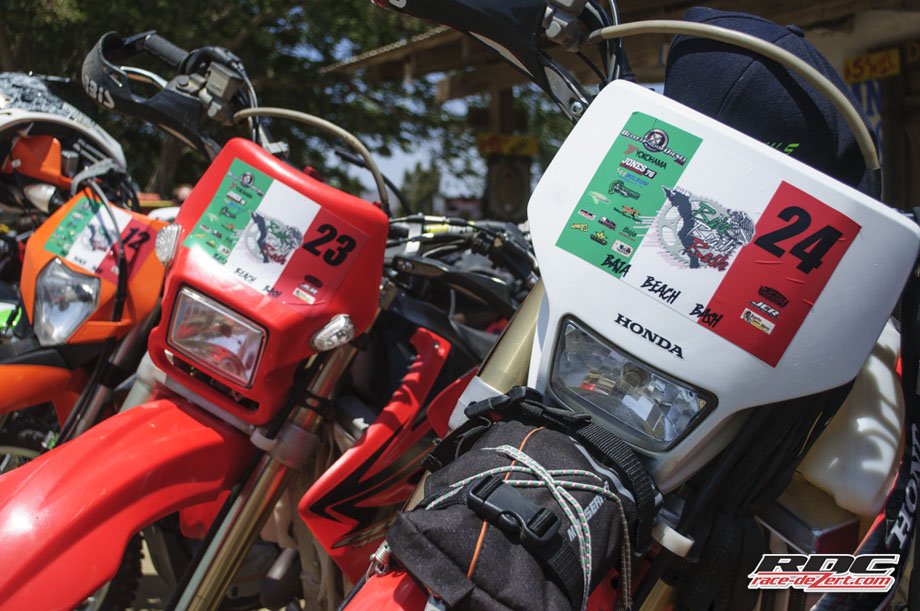 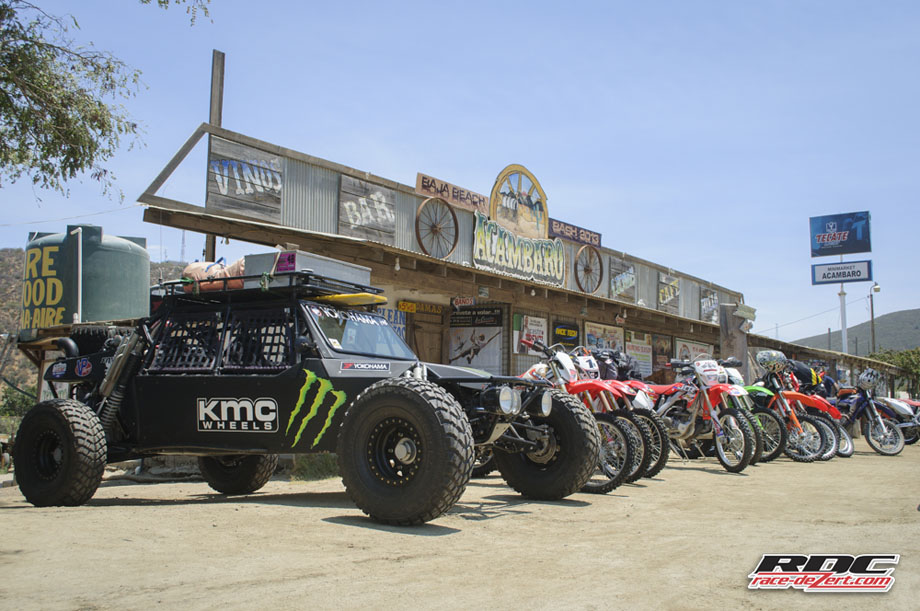 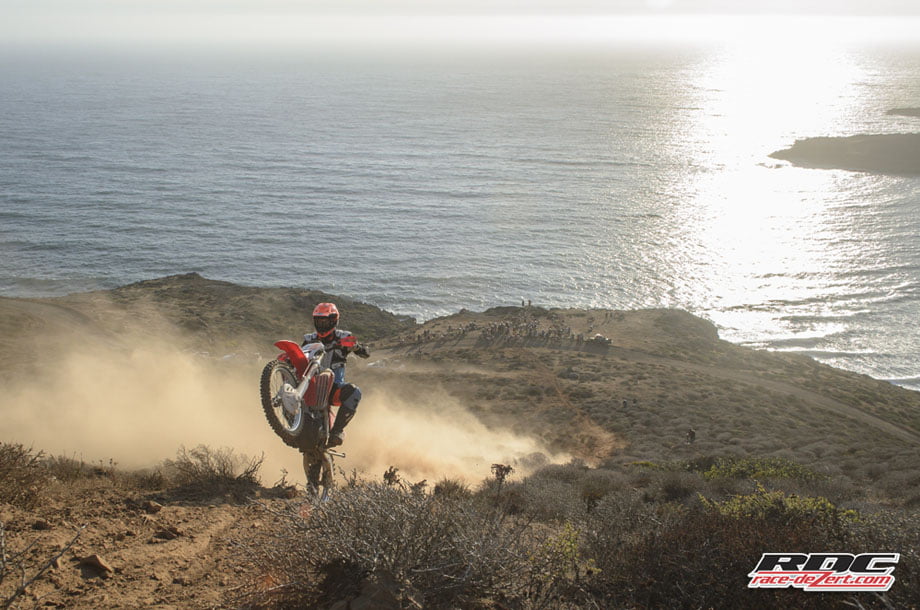 S
Scotty Breauxman
I have been around Cameron Steele since the first Baja Beach Bash 5 years ago and watched him create unity and share his love of Baja with hundreds of people. From a distance before I met him, I had a preconceived notion of rich and famous announcer guy. After really getting to know him and watching closely how he interact with people, I can tell you my personal opinion that he is one of the nicest and most genuinely sincere people I have ever met. He and Johnny put a tremendous amount of time, energy and money into this project wile leveraging all his resources to make it happen. Don't let those black socks and flat bills fool you, this guy is an A+ ambassador for our sport in Baja and I am honored to have been involved with this project. Can't wait til next time

I was thoroughly stoked to find out we were riding to the Rancho Santa Marta orphanage and giving them some support. What a great event put on by a group of guys with really big hearts.

What an epic trip! I'm super stoked to have done this amazing ride for a 2nd year. What an amazing cause to support and way to spend 4 days roosting with some of Baja's best. Just happy to be along for the adventure.
This ride is too much fun to explain.

When it comes around again, next-year, get on it! There are so many guys and gals from All over the World...come on down, ride wheelies on the Beach and get roosted by a Girl from Spain!

See you in the Baja!
Scotty B man you hit the nail on the head with Cameron. I met him a few times prior to this event at different functions and felt the same. Now im getting to know the real Cameron Steele which I think is pretty cool.. Cams got a huge heart and genuine desire for his passions and you gotta respect that. What he and the crew did was just past amazing. They are like a well oiled machine. Everything went smooth, clean, well organized, straight forward and no BS (you cant imagine how hard it can be keeping 60 riders in line-the crew was flawless. Cam it was perfect for me. I have a different outlook on our mistress. I was proud to be a part of this amazing journey known as "The Baja". Cameron showed me how to treat a riding area as your woman. Lots of respect and TLC. Hats off to Cameron, Johnny, Mark, Evan (Cool dude pit crewman. Always has a smile) and the rest of the amazing DA crew. I appreciate you all!!
The 2013 BBB was amazing in every way; The Leaders, the Trail Crew, the Riders, and the Chase Crews. Besides always wanting to ride the Baja, having the added benefit to help support Rancho Santa Marta www.ranchosantamarta.org was what made me go with the BBB Crew. Cameron Steele was awesome! His leadership skills are tremendous and his desire to have everyone experience the Baja is genuine as Mike said.
Cameron, Johnny, Moss, Lobby, and Manny (sorry about your two-fiddy Manny) - thank you for the memories.
To all the new friends I made - I hope to see you all again in Baja.
JCR and DA Crews - You guys ROCK!

Blessing to you all.

And, Robert, you are Golden. You gave me my 1st laughs of the trip and you empowered me to sling a Boat-Load of crap your way. Besides, you're responsible for a new "Award" Category!

See you next year...when you're on an X!

I have ridden Baja many times but this was my first 'organized' ride, and won't be my last! Cameron, Johnny, and the entire crew put on an epic ride and journey into the northern part of Baja. It felt good to raise money for the orphanage and meet the dedicated people who run the orphanage. We rode a lot of fun and challenging single track, and had a blast hauling butt on the beach. There is something about mystical Baja, once you ride her one time, there is something that keeps calling you back for more. Also, are you kidding me!, I got to ride with all the pros like Johnny, Destry, Cody, Cameron, etc. AND Laia - Wow that Laia was a phenominal rider - we were all in awe. Also, who knew Cameron was a comedian??? He definately made the trip with his nightly meetings where we were all laughing till it hurt! Congrats guys, you put on a great trip for a great cause!
My name is Robert aka "NRP" #49 I had a blast riding with everybody , it being my first time in Baja I have no complaints . No bike problems , no crashes . Can't wait till next year to go on the rip. thanks for everything &amp; sorry to everyone I "passed" doing "wheelies"!!!!