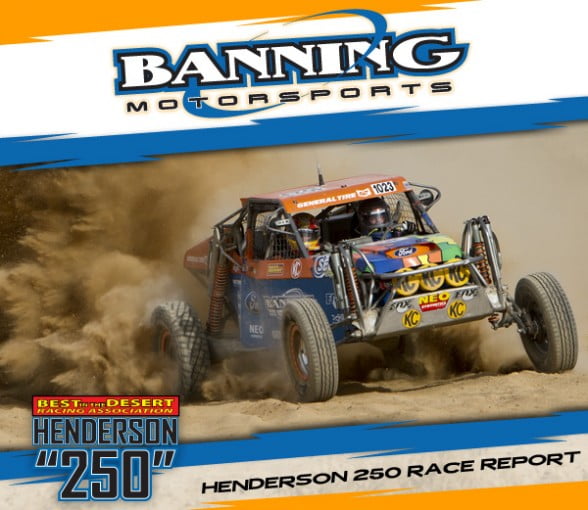 Banning Motorsports arrived at the BITD, Henderson 250 looking to wrap up a great season of racing. The team just took an amazing class 10 victory at the Baja 1000, a peninsula run that covered a staggering 1,121.55 miles. With little time to turn the class 10 car around, the team would pit the 1123 car against the much faster class 10 field. They had a huge challenge ahead of them to secure the final podium spot in the championship over competitor Cody Reid. Bryan Folks had a substantial lead in the class 1100 championship but this would be no victory lap, he and Ryan Marley had a race to run!

The Henderson race divides racers into three groups. The bikes, quads and utv’s ran the first race; Class 1100 would run with several other classes in the second race and class 10 with the fastest vehicles in the third. The course has the typical blend of Nevada terrain; silty, rocky and shrouded in dust. With so many racers in championship mode, nobody was holding back.

The team strategy for race two was for Bryan and Ryan to be conservative running at 80% pace. Soon after taking the green flag however, the car was begging for more speed. “We felt very comfortable running at 95%,” said Bryan, “we soon caught up to the leader and made the pass. We continued to push hard building up a cushion on the rest of the field.”

They pulled into the main pit before the final lap to have the crew do a thorough inspection of the car. Everything checked out fine so they took off with a sense of certainty on the outcome of the race. The only thing you can count on in racing is that the outcome is never certain. Five miles into the last lap, they tagged a rock hidden by the deep silt. On this final lap of the final race, they suffered their only flat tire of the entire season. “We knew we had built over a 5 minute lead on the next car on the first lap, so we were hopeful of getting the wheel changed and still stay out front of the pack,” said Bryan, “As fate would have it, Ryan put in an extremely fast wheel change (3.5 minutes), which allowed us to stay out front.” Without a spare in the rack, they would have to back it down until they reached the next pit.

“The pit crew was very well prepared,” said Bryan, “They did a great job getting a new wheel in the rack and looking the car over one last time. After exiting the pit, they radioed that we still had a 3 minute lead, so we elected to maintain a fast but cautious pace. After pushing for the next 20 miles we knew we only had a third of a lap to the finish, so we backed down a bit and drove the car in with no problems.” The team passed their final test; showing they were indeed worthy of the class 1100 championship in 2012. “Special Thanks go to Chris Godfrey for another great job prepping the car, Ryan Marley for an outstanding job keeping me focused and for an amazing job changing the wheel so fast,” said Bryan, “The entire pit crew and staff accomplished another great race.” 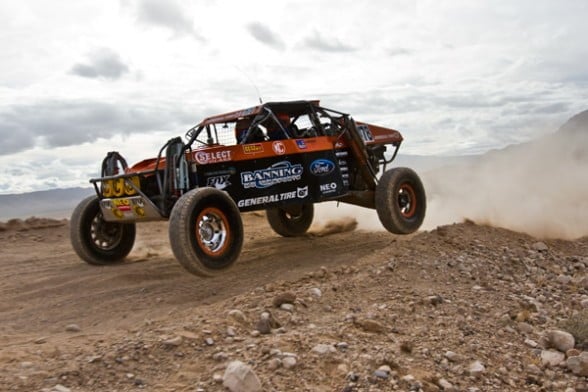 With no time to bask in the glory, the team now had a class 10 race to run. The 1123 is a great car but they put the beam cars like 1123 in a different class then the independent class 10 cars for a reason. The team would have its work cut out for them running with the faster class 10 cars. “We started in the second row and ran 3 laps problem free,” said Lee Banning, “Running with the Trick Trucks and class one’s, the course got progressively rougher every lap. We had no flats; just a clean, fast race. Rick Graf and Chris Godfrey got the job done. We want to thank the whole team for great support all year long and all of our sponsors that keep us on the road with great support and bullet proof parts.”