Beer, Bears, and Groups that don’t Usually Play Well Together for $400 Alex – How Collaboration Achieved Results in Idaho

Brian Dilenge did not have a particular project in mind when he invited disparate groups of outdoor recreation enthusiasts to sit down at a table in 2019. He just knew that it was time for motorized and non-motorized groups to start working together to create better opportunities for everyone. He had seen it work before during his time working on the Salmon-Challis National Forest, and he knew that there were enough people with a passion for the outdoors in Idaho Falls to make it work again. Leveraging his position as a Trails Specialist for the Idaho Department of Parks and Recreation Off-Highway Vehicle Program, Brian utilized his contact network to get the ball rolling on such a group, the Snake River Trails Alliance (STRA). 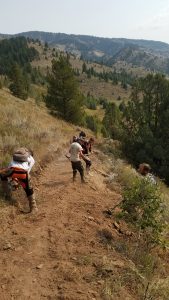 Bear Creek is a single-track trail on the District that is popular with motorcyclists, mountain bikers, equestrian users, hikers, and fly fishers. The trail tends to melt out early and allow access to many other trails on the District and some popular hot springs locations. The catch is that Bear Creek has a large watershed going all the way down to the Palisades Reservoir, which tends to carry a lot of water in the runoff season. This can make the creek crossings on the Bear Creek Trail impassible at certain times of the year. The local population of Beavers damming up the creek and a few aging bridges did not improve the situation. There had been ongoing discussions for many years on how to improve the trail.

So, Colby had funds, he had a project, but he still needed some support from the user community. He reached out to Brian to see if he could help him drum up some enthusiasm for the project, and Brian said, “I have just the group for you to talk to.” Colby came to speak to the newly formed STRA and was not only given the group’s immediate support, but the different organizations represented at the meeting offered up approximately 675 match hours towards the project. 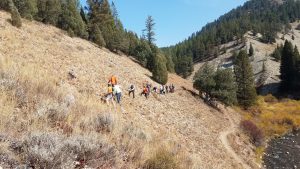 Striking while the iron was hot, the District applied for a grant from the Idaho Parks and Recreation utilizing the funds from the National Forest Foundation donated from Anheuser-Busch Foundation and the local club support as match. The IDPR grant for $63,000 would provide install of two bridges on the trail where it crosses Bear Creek and pay to have them flown in by helicopter. The funds from The Nation Forest Foundation/Anheuser-Busch would be used to conduct 3 trail reroutes (of approximately 1.5 miles total) that would bring the trail up on the hillside out of the creek and sensitive riparian area. This would eliminate six water crossings from the trail, increase habitat protection for the native Yellowstone Cutthroat Trout, increase trail sustainability, reduce sediment reaching the Palisades Reservoir, and decrease trail maintenance needs. On top of all this, the trail would be usable throughout a longer portion of the year without the swift and deep creek crossings. A win for all types of trail users for sure. As an added bonus, Idaho Parks and Recreation was able to provide an additional trail reroute using the Sutter 300 trail dozer owned by the Department.

Those of you reading up until now are probably starting to get the warm fuzzies, but wait it gets better. During the trail workdays organized by Mike Evans of the Idaho Single Track Alliance, all sorts of outdoor enthusiasts showed up. Members of the Idaho Single Track Alliance, the Idaho Falls Trail Machine Association, the Snake River Mountain Bike Club, and numerous other single volunteers sat down for a breakfast provided by Klim (the snowmobile and off-road gear company) and then headed out to the work site. People who may not have known each other a short time ago, sat down for a meal together and then tackled a shared goal. The different groups have been working together for a common cause to the tune of over 400 hours of volunteer match hours. Brian, and many others who have taken part in this project are most impressed by the cooperation and collaboration among the groups. Colby, says “The coolest part of this project is all the groups/people who have been involved.” So, whether the volunteers are on this project are accessing the trail by foot, horse, mountain bike, or motorcycle, they are all ending up in the same really great place. 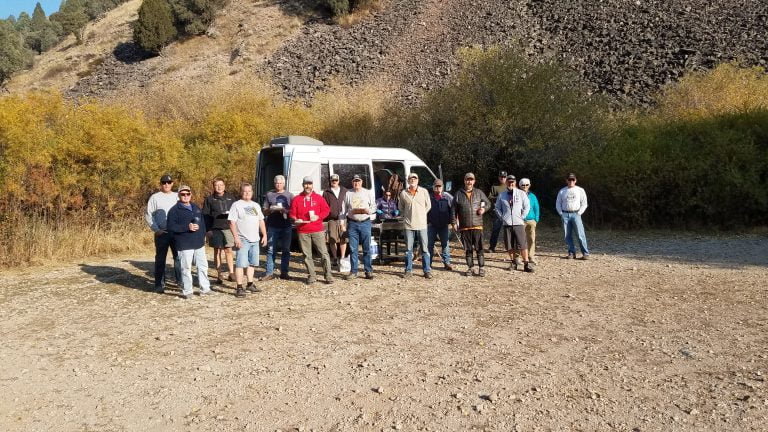