The Dakar being the Olympics of Off-Road racing, competitors attend from every continent. Media coverage at the Dakar Rally has global dimensions. As the rally moves from location to location and so does the entire TV production.

The A.S.O. produces its own daily TV program that then gets distributed to various participating countries TV networks. In the US, NBC Sports is the network that delivers daily highlights and updates from the race. Some of these client networks add their own interviews or action to that particular nations Dakar partner. In the case of NBC Sports, one camera-man and online talent for interviews is on site at every stage finish to produce interviews uniquely tailored for the US audience. 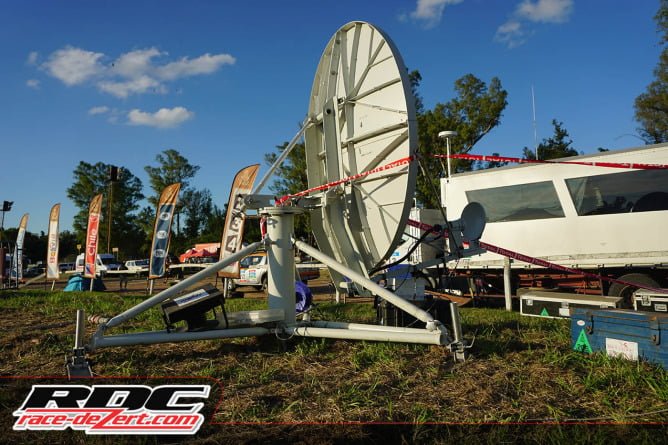 Other countries go a step beyond the basic interviews and add live feeds from the nightly bivouac or even the stages. There is a total of no less then 20 client TV channels on site here at the Dakar. 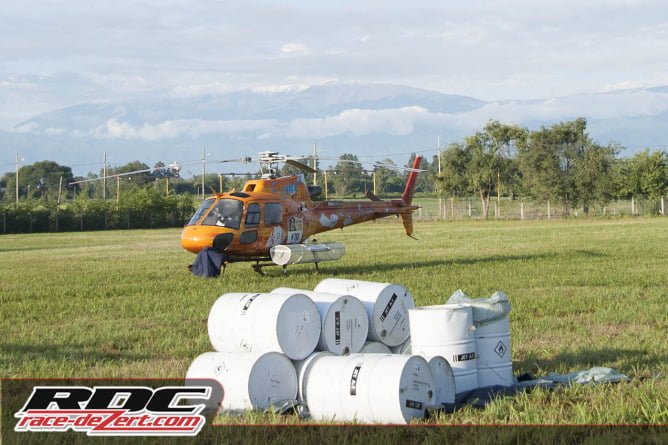 Dakar’s own TV crew consists of approximately 250 staff that works daily in extreme weather and working hour conditions. Its a work of passion and a rewarding job; it can be said that every one of the TV crew staff walks around with a smile. Many of these guys and gals are seasoned and wouldn’t have it any other way. One of them even tattooed the Dakar logo on his forearm. 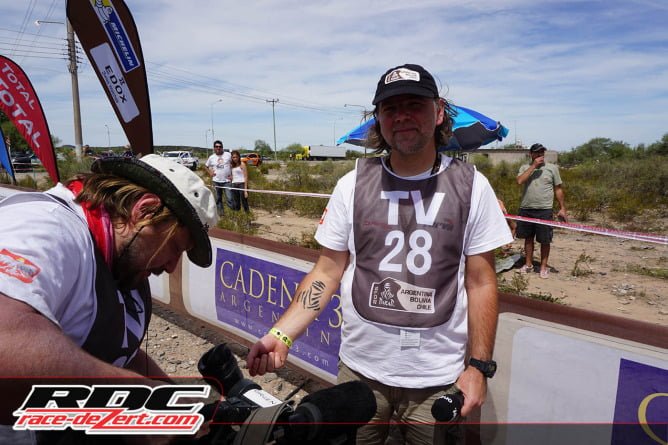 To get all of those breathtaking shots we have become accustom to over the years there are 3 helicopters in action with gimbal mounted cameras. These helicopters shoot the action from the air but also land to shoot with handheld cameras to get very close ups or instant interviews in cases where a competitor may have stopped during the stage. 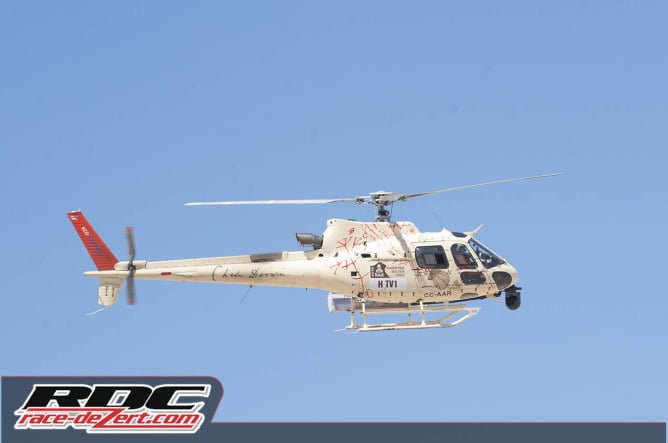 During the stages there are up to 13 stationary cameras and crews positioned alongside the course. Each ground TV crew travels with its own A.S.O. livery 4wd vehicle from assignment to assignment.

All content shot by helicopter and ground crews gets transmitted via satellite uplinks that are located alongside the course. This feed goes directly to the editing room positioned in the daily bivouac. Helicopters drop their recordings during refueling stops next to satellite uplinks. Ground crews either have their own uplink or drive to the next uplink point nearby. Time is of the essence to produced the daily show.

The editing room is a 18 wheel trailer with pop outs on both sides to triple its work area. This air conditioned room swarms like a bee’s nest as staff intensely edits the daily shows together. In addition to the A.S.O. basic feed those client nation partners (like NBC Sports) may also get their content edited and transferred by the A.S.O. TV staff. 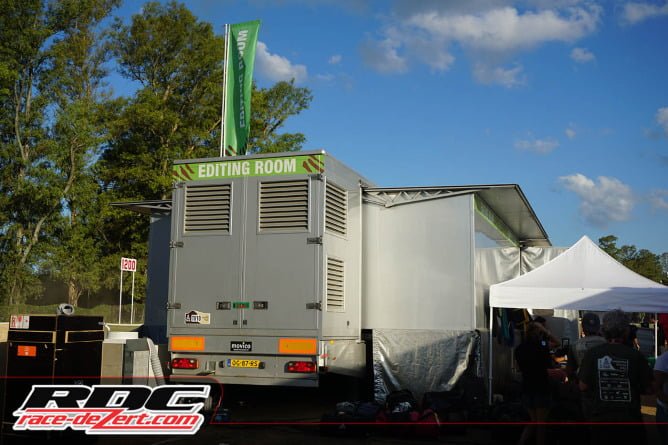 Instead of complicating the workflow, all voice-overs get applied by multi lingual voice talents straight at the editing desks. Whenever voice is being recorded a yellow rotating light gets turned on to let everyone to be absolutely silent.

Inside the bivouac up to 4 cameras are being operated by A.S.O. TV signal transmitting radios mounted on backpacks to get those video transmissions from the point of recording to the editing room instantly. 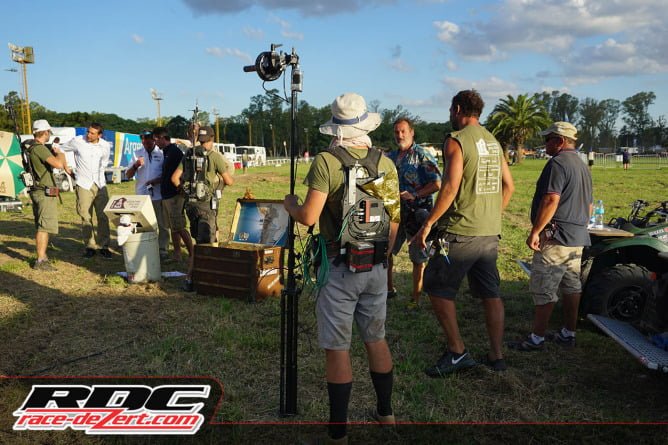 The TV compound consists of no less then 6 large trucks that travel daily from bivouac to bivouac to haul the editing bays and all other production gear. Most of the crew travels daily by plane from location to location. 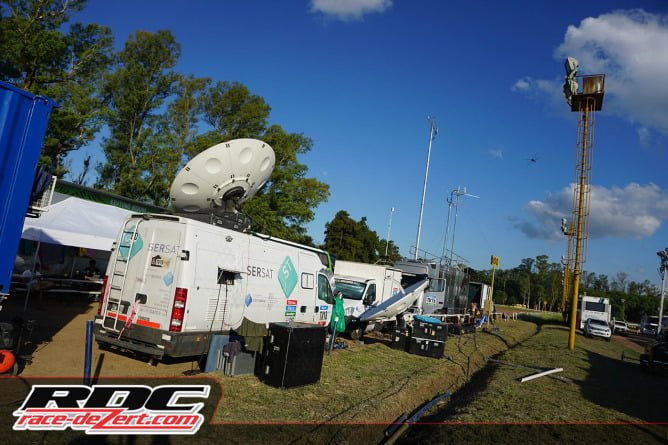 There are also 2 TV signal relaying planes in operation that act like satellites for communication purposes.

Daily A.S.O. installs Point of View (POV) onboard cameras in race cars of interest. These cameras can be remote triggered by the TV staff in order to not record needless hours of footage during boring ports of the day. The competitors will see an indicator light as a courtesy to let them know when it records and when not. Every competitor agrees to be wired up for POV’s and denying them is not an option.

Bolivia TV, France TV and Fox Sports Latin appear to have very comprehensive coverage with additional programing beyond what is shown in the US. 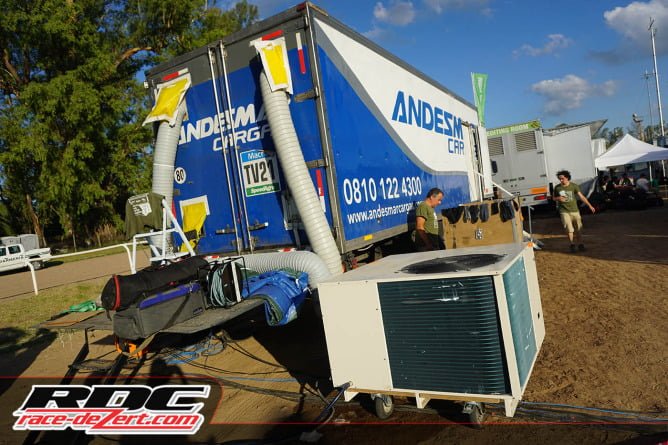 Inside the bivouac A.S.O. setup a local Bivouac-TV service that wirelessly broadcasts the daily TV show and perhaps the previous days episode with the Bivouac. On a second channel useful information pertaining to the current state of the rally. Here daily reminders get send to alert all participants of schedule changes and things to be aware of.

During registration handheld TV’s where available for rent in case a team wants to have its own Biv-TV within their own camp. In the dining area and some other spots the current and previous TV show loops nonstop so that anyone may take a little breather and enjoy the same programing you the viewer at home craves daily.