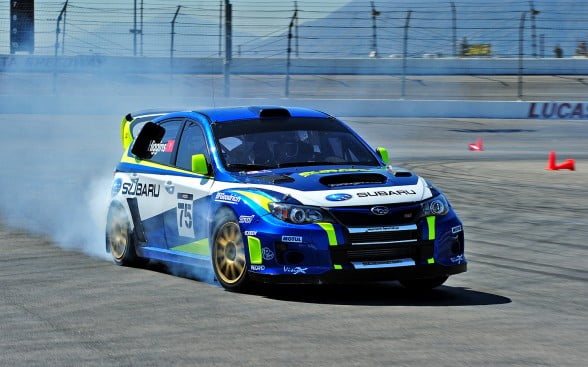 LOS ANGELES (July 27, 2011) — BFGoodrich® Tires, an official sponsor of Summer X Games 17, will upgrade the experiences for both racers and fans at the upcoming event July 28-31, 2011. Not only will rally teams and drivers be challenged with a new race course leading them through the streets of downtown Los Angeles, but fans can win unique prizes — including a trip to the Skip Barber Racing School — and check out the SCORE Baja 500-winning race truck and a special tire carving at the BFGoodrich Tires booth at X Fest.

BFGoodrich Tires has established itself as a dominant force in X Games rally competition and has the opportunity to add two more rally gold medals to its X Games trophy case — one in the Rally Car Racing competition and one in the RallyCross competition. Since 2006, BFGoodrich-shod race cars have won 17 of the 20 medals awarded, including five of six gold medals: Travis Pastrana (Subaru) won gold in 2006 and 2008; Kenny Brack (Ford) won gold in 2009; and Tanner Foust (Ford) won two golds in 2010.

“BFGoodrich Tires and ESPN X Games competition has been a winning combination for years, and we’ve just upgraded that combination with our enhanced X Fest presence, our association with some of the best drivers and teams, and, of course, our relationship with Shaun White,” said Jamey Fish, director, consumer experience at BFGoodrich Tires. “Thousands of BFGoodrich Tires employees and enthusiasts look forward to an exciting X Games on the streets of Los Angeles.”

Teams Upgrading to BFGoodrich Tires
BFGoodrich Tires will be the tire of choice for many of the top teams this year including all three Subaru Rally Team USA drivers, a handful of Ford Racing competitors and a number of privateers. Drivers running BFGoodrich tires include superstars Travis Pastrana, Dave Mirra and Tanner Foust; rally champions David Higgins and Marcus Gronholm; and almost all of the top-ranking privateers.

Tire choice will be critical as the course winds through the streets of downtown Los Angeles, which will include the famous 52-foot gap jump. The BFGoodrich® RC01 Rally (asphalt) tire will be the tire of choice for many teams, as more than 90 percent of the course will be on paved city streets. BFGoodrich Tires will have engineers on site assisting teams with compound choices, sizing and all related tire issues in order to optimize driver and vehicle performance.

Wave the BFGoodrich Tires Checkered Flag for V Foundation
BFGoodrich is helping upgrade the racing experience by auctioning the opportunity to wave the checkered flag during the Rally Car Racing competition on Saturday, July 30. Fans can bid on this once-in-a-lifetime experience during a silent auction to benefit the V Foundation for Cancer Research (www.jimmyv.org) at the ESPN X Games Kick-Off Bash on Wednesday, July 27.