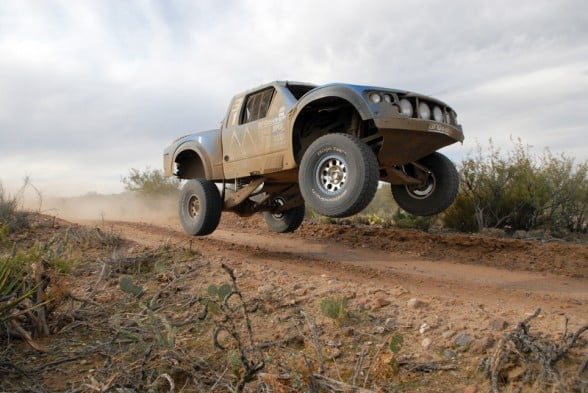 “We couldn’t have asked for a better finish to the 2011 SCORE Baja 1000 or a better weekend overall,” said Silvia Mammone, motorsports marketing manager, BFGoodrich Tires. “We are thrilled with the McMillins’ overall win, Bryce Menzies’ SCORE Trophy Truck championship and Nick Vanderwey’s second place podium finish, running for the first time on the 42-inch BFGoodrich Baja T/A tires. Congratulations to the drivers who finished what looked to be one of the toughest Baja races in history.  We are not only celebrating their individual accomplishments but also the 25th win for BFGoodrich Tires.”

The finish to the 44th Annual SCORE Baja 1000 was one of the closest in recent memory. Throughout the last 300 miles, Andy McMillin (#31 Ford Raptor), Nick Vanderwey (#84 Chevy Silverado) and Bryce Menzies (#70 Ford F-150) were trading places and rubbing bumpers. Vanderwey was first to the finish line, but McMillin came in less than two minutes behind and earned the victory with the corrected times. Menzies was third to the finish line, two minutes behind McMillin.

“That was the most intense race I’ve ever been a part of. I was 30 seconds to them, and Bryce was 30 seconds to me on the beach. It was a freight-train free-for-all. It was such a blast. It was so much fun. I’m glad to win my second Tecate SCORE Baja 1000 with my dad. It means a lot,” said Team BFGoodrich member Andy McMillin.
Vanderwey was the only truck in the race to run on the 42-inch BFGoodrich Baja T/AKR tires. Moments after Scott McMillin thanked BFGoodrich Tires at the post-race press conference, Vanderwey said, “Well, I had the awesomest tires — I had the 42-inch BFGs on 20-inch TrailReady wheels. What a race — holy moly! It was intense racing.  We just hit so many rocks.  It was unbelievable what these tires will take.”

Bryce Menzies earned the SCORE Trophy Truck championship with his third place finish, capping off an incredible year for the SCORE rookie. Menzies started strong with a win in January at the SCORE Laughlin Desert Challenge and won his first ever SCORE Baja 500 in June.

Don Moss and his Class 3 team, other winners running on BFGoodrich tires, marked their 36th SCORE race win, third race win this season and eighth Class 3 win in this race. For Dan Chamlee, this race also marked his fifth Class 7 victory in this race and third race win in his class this season. Finishing a career-best fifth overall and in SCORE Trophy Truck, Clyde Stacy and Juan Carlos Lopez (#18 RPM Off-Road Chevy Silverado) finished in 15:40:38.

This year’s race also capped off the most spectacular SCORE race in the McMillin family’s 36-year history of SCORE desert racing.  Mark’s youngest son Luke McMillin, with driving assistance from Justin Smith, won Class 1/2-1600 for the second time this season and the first time in this race to secure the season point championship in his class for the second straight year in an AlumiCraft-VW. Scott McMillin’s daughter, Jessica McMillin, 26, (#1331 McMillin Realty Ford F-150) overcame an early rollover near Ojos Negros to finish the season undefeated with five wins with her victory Saturday in the Pro Truck class. She was the only SCORE racer this season to win her class in all five SCORE Desert Series races. Jessica, Andy, Daniel and Luke McMillin are all third-generation SCORE desert racers, continuing the lasting legacy left by family patriarch Corky McMillin, who passed away in 2006. Jessica McMillin also earned the SCORE Pro Truck class championship for the season.
An Unexpected Delay

The start of the 44th Annual SCORE Baja 1000 was delayed about an hour due to a semi-truck that broke down on the race course at race mile four. By the time the semi truck was spotted, 13 Trophy Trucks had already left the start line. Once the semi-truck was moved from the race course, the remaining Trophy Trucks were paraded out to race mile four and restarted. The finishing percentage this year was a strong 55.76 percent considering the intense degree of difficulty of the bone-crushingly rocky terrain and the unique ruggedness of the course.

The following is a complete list of BFGoodrich Tires 2011 SCORE Baja 1000 class winners:

For the 37th time, the 692.82-mile course started in Ensenada and finished, for the 21st time, in Ensenada, extending over one of the most rugged courses in history through Baja, Calif. The race boasted 278 entries from 34 states and 16 countries that competed in 36 Pro and seven Sportsman classes for cars, trucks, motorcycles and ATVs. It is the oldest and best known of all desert races, and it remains the single most meaningful accomplishment for drivers. Since 1967, the preeminent desert race has been run over the mysterious and challenging Baja, Calif., peninsula, except in 1974 when the international fuel crisis forced a cancellation.