Five Team BFGoodrich members awarded coveted spots in
legendary off-road race and high-performance driving school
GREENVILLE, S.C. (Sept. 25, 2012) – BFGoodrich Tires® today announced the winners of the 2012 “Select-the-Seats” program. As a result of the online contest, four drivers will participate as members of the 2012 BFGoodrich Tires/Wide Open Excursions “Baja Challenge” team and will race in the 45th anniversary of the Tecate SCORE Baja 1000 race Nov. 14-17, 2012 in Ensenada, Mexico. Another winning driver will be heading to the Ford Racing High Performance Driving School in Tooele, Utah. And the gold medal winners of the Sports Car Club of America (SCCA) National Championship were awarded two spots in the “Baja Challenge” buggy. All drivers will be equipped with racing gear courtesy of MasterCraft Safety®.
The winning drivers who will be a part of the “Baja Challenge” team are:
·         Brad Lovell
·         Bud Brutsman
·         Kyle Tucker
·         Roger Lovell
·         Luke Wilwert
·         Michael Crawford
The winning driver who will be going to Ford Racing High Performance Driving School is:
·         Rob MacCachren
“This year’s ‘Select-the-Seats’ program was our most successful yet, with triple the number of votes received versus last year’s program. BFG’s online community was engaged and rallied the vote for their favorite Team BFG motorsports personalities,” said Jamey Fish, director of consumer experience, BFGoodrich Tires. “It is programs like these that continue to reinforce the breath of our brand’s abilities to provide thrilling driving experiences both on and off the pavement.”
Team BFG members Bud Brutsman, Brad Lovell, Roger Lovell, Kyle Tucker and Rob MacCachren all come from very different, yet successful automotive backgrounds.
·         Brad and Roger Lovell make racing a family affair, fielding rock-crawling and off-road racing entries as Lovell Racing. As both fabricators and drivers the team dominated rock crawling competition for years and now is competing for championships in Ultra 4 rock racing and TORC off-road series. The team’s rock racer was recently featured on an episode of the hit show, “Top Gear.”
·         Bud Brutsman combines a love for all things automotive with a passion for production to create some of the best known car-themed shows on television including Overhaulin’ and Rides for the Learning Channel, Hot Rod TV, Optima Street Car Challenge and Car Crazy on SPEED.
·         Kyle Tucker and wife Stacy opened Detroit Speed and Engineering in the heart of stock car racing country, where they design, fabricate and install modern engineering for classic muscle cars. Kyle’s creations or “test cars” can be seen competing throughout the year at a variety of events showing the GO not just the show. Kyle and DSE have been featured on SPEED earlier this year and will be creating Kyle Busch’s Toyota Dream Ride for SEMA.
·         Rob MacCachren has won nearly everything there is to win in off-road racing. Rob has been a BFGoodrich Tires ambassador for over 20 years, and in that time has dominated Baja racing with five wins each in the SCORE Baja 500 and 1000 races. Rob just recently achieved a 200th career win on BFGoodrich® tires at the Traxxas TORC Series at the historical Crandon International Raceway.
“Simply put, without the fans, we wouldn’t have this sport,” said Bud Brutsman. “Like crossing the finish line first, I’m extremely excited to receive top honors from the public and can’t wait to head to the Tecate SCORE Baja 1000 in November to participate in one of the world’s toughest, most-intense, most-sought after races in the world. A big thank you to BFGoodrich and everyone who voted for me.”
Fans will be able to watch the Tecate SCORE Baja 1000 by visiting www.race-dezert.com.
The “Select-the-Seats” program, now in its third year, has crowned the 2012 winners:
·         Fans voted via online application on BFGoodrich Tires’ Facebook page (facebook.com/bfgoodrichtires) for their favorite Team BFGoodrich members to win a coveted spot at the Tecate SCORE Baja 1000 or Ford Racing High Performance Driving School. In an exciting twist to the program, the winning desert racer, Rob MacCachren, will attend the Ford Racing High Performance Driving School, one of the top pavement racing schools in the country. Bud Brutsman, Brad and Roger Lovell and Kyle Tucker will join the “Baja Challenge” team and get behind the wheel at the 45th annual Tecate SCORE Baja 1000.
·         BFGoodrich also challenged SCCA members to compete for a seat in the “Baja Challenge” buggy by offering an additional two seats to the gold medalists competing on BFGoodrich g-Force™ R1 tires. The winners were Luke Wilwert and Michael Crawford. Wilwert captured his first Showroom Stock B National Championship at the 49th SCCA at Road America, winning by a mere 2.145-seconds over the 14-turn, 4.048-mile track. Crawford survived a wild race to win the Showroom Stock C National Championship at the SCCA National Championship Runoffs.
New for this year’s “Select-the-Seats” program, participating fans had a chance to win an offroad adventure trip for two at the Wide Open Excursion driving experience outside Reno, Nev. Erick Tuttle of Oxnard, Calif was randomly selected at the end of the public voting period and will learn how to put BFGoodrich tires to the test in the rough and unpredictable terrain of the Nevada desert in Wide Open cars.
Team BFGoodrich is an exclusive group of racing enthusiasts, including on- and off-road drivers
and car builders. This year’s members include:
·         Andrew Caddell
·         Andrew Comrie-Picard
·         Andy McMillin
·         Brad Lovell
·         Bryce Menzies
·         Bud Brutsman
·         Carl Nadeau
·         Chris Brandt
·         Dan McKeever
·         Daniel McMillin
·         David Higgins
·         Jason Childress
·         Kevin King
·         Kyle Tucker
·         Rich Minga
·         Rob MacCachren
·         Rod Hall
·         Roger Lovell
·         Terry Earwood
·         Troy Trepanier 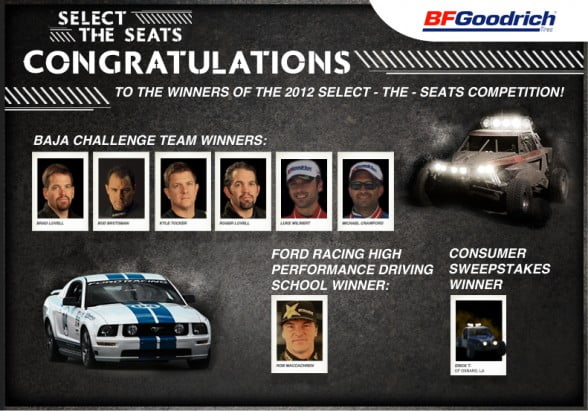