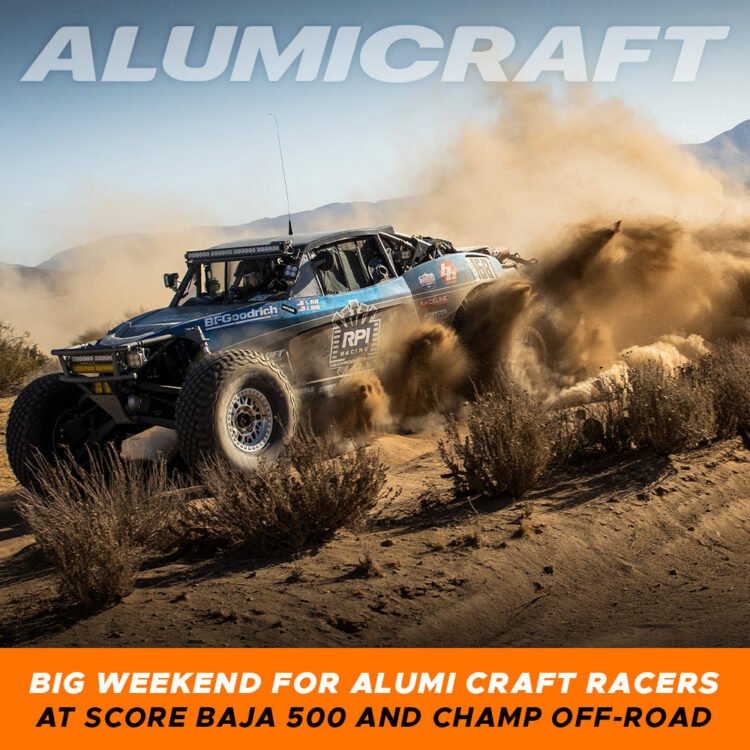 Off-Road racing is a diverse sport that takes place year-round. From the deserts of Baja to the short course circuits of the mid-west, Alumi Craft Racecars will be competing and winning! Once again, this was a big weekend with Alumi Craft Racers taking multiple race wins and podiums at the 54th SCORE-International Baja 500 and the opening rounds of Championship Off-Road. 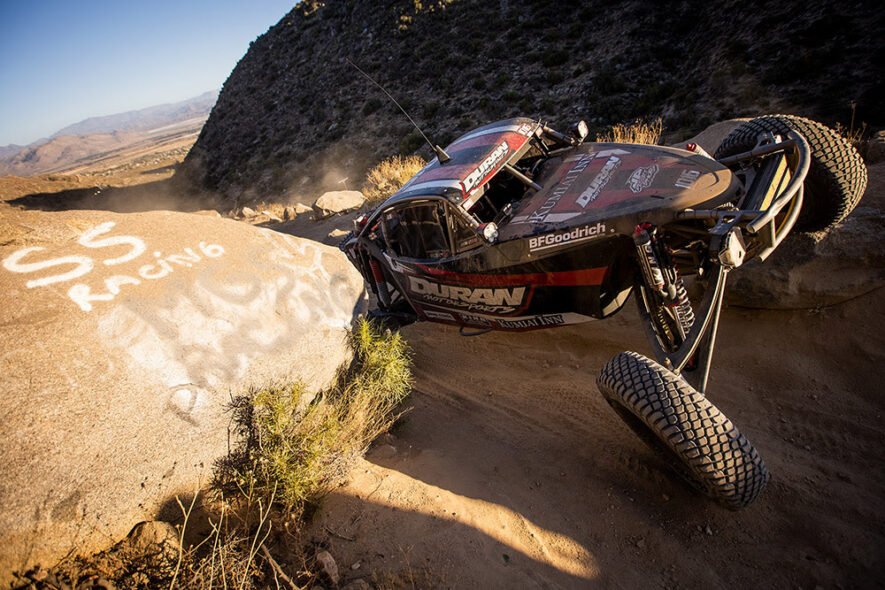 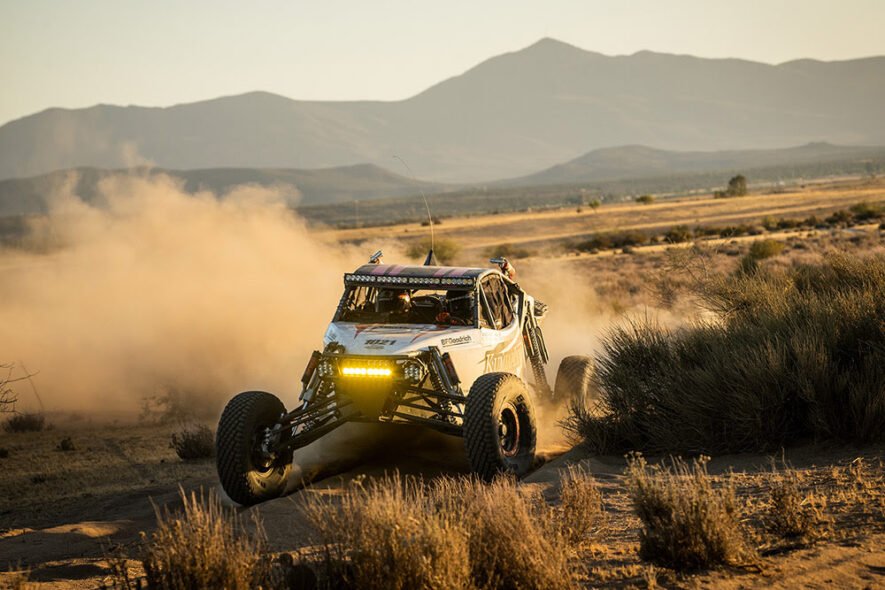 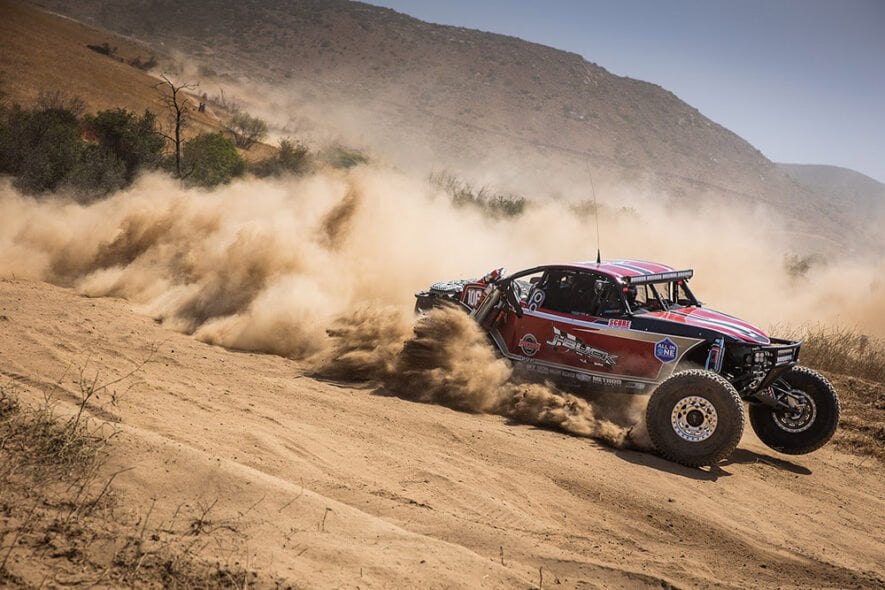 Up in northern Wisconsin at Antigo’s Lions Roaring Raceway, Alumi Craft racers cleaned up and walked away, leading the points after Championship Off-Road Rounds 1 & 2. Michael Meister and Mark Steinhardt took 1st and 3rd on Saturday and then flipped the podium, taking 3rd and 1st, respectively, on Sunday. These two Alumi Craft short course racers are now tied for points. Sunday’s Round 2 was a complete Alumi Craft podium sweep with Michael Hester taking 2nd place! 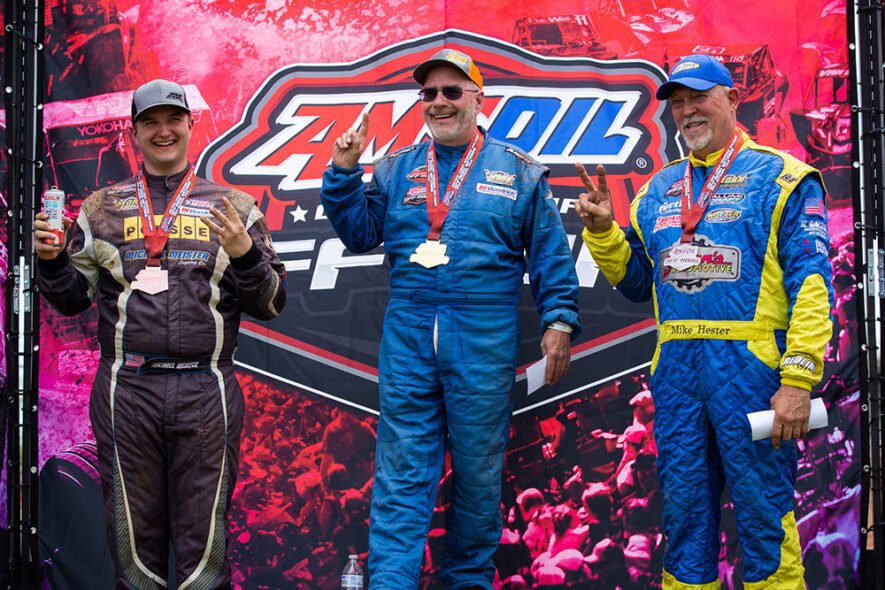 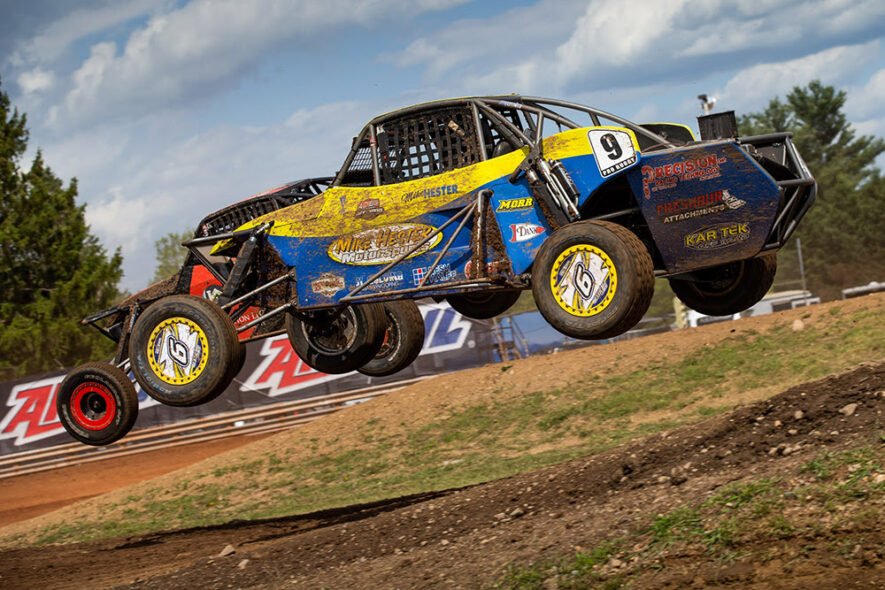 “Matt Dewhurst at Race Pace Prep did a complete prep on the car before the race. The #168 Alumi Craft RPI Class 1 ran exceptionally well up to Race Mile 120. We lost the oil pump belt in a heated battle chasing down the lead Class 1 car.”

“After getting that fixed, we kept pushing till the air cleaner got plugged and started robbing power at Race Mile 240. At this point, I was informed Shelby had to return to the US for a family medical emergency and that I would need to go the whole way. We blew out the air cleaner the best we could and got back underway.” 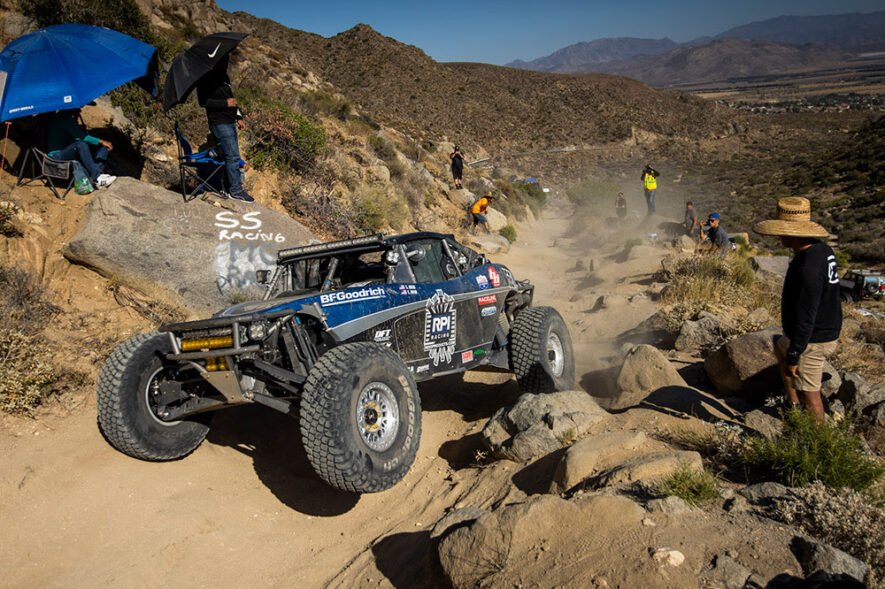 “We started pushing hard, trying to make up time until I messed up and clipped a rock at Race Mile 300. I got a rear flat tire, changed it, and returned on the road. By Race Mile 360, I was back up to 2nd on the road. The RPI team topped off the car with fuel and put a new air cleaner on it. From there, we pushed to the finish, making up roughly 13 minutes on the lead car. My co-riders, Mike Diorio and Travis Critz, did an amazing job making sure I hit every VCP. This paid off for us in the end with the win. Our crew was insane with how fast our stops were. I could not have done it without them.”

“The plan was for me to drive the race solo since Freddie Willert (my partner) was committed to riding with his 16-year-old son Matt Willert in his 1600 car. Our car is one of very few single-seater Class 10 that Alumi Craft has built to date.”

“We were the 17th car to leave the line at around 10:30 AM. Instead of treating the race like a sprint, I planned for a long hot day with the idea that if I could avoid getting out of the car all day, it would be a successful race. Consequently, I set a very conservative pace, not taking any chances and handling passes in the dust with extra care.” 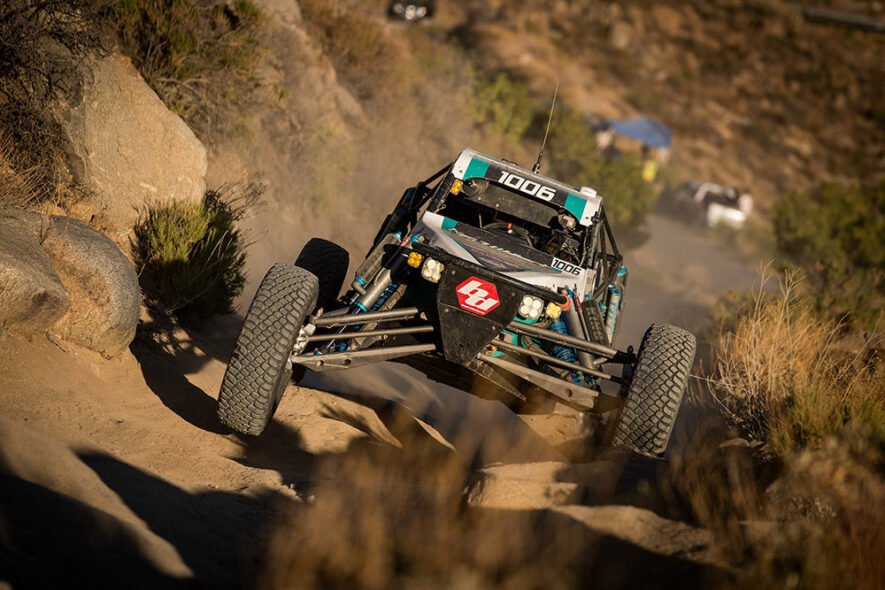 “I was 6th on the road by the time I came to the bottleneck on the descent of the Molino Summit. At that point, I got out, regrouped, checked the car, and was able to eat and drink while everyone waited for the driver of the TT Spec to be airlifted out. Once the race started to move again, I was nearly in the desert where our Alumi Craft shines. I opened it up a bit and picked up a few more positions.”

“By the time I came out of the desert and into Mike’s, we were the third car on the road. Then in Valle T, we were first physically. From that point, I maintained a reasonably conservative pace to the finish line. Our Alumi Craft ran so well and the handling was so spot on that I avoided most of the rocks and obstacles all day – never getting a flat or going off course.”

“While I was tired at the finish, I could have gone longer! The win and my ability to go 11 hours in the car are a testament to how well our Alumi Craft handles and the confidence it inspires.”

“It was a great time being back at the races and I am excited about the 2022 season. Saturday, I started 3rd and was too patient at the start and let another fast driver get by. After that, I put my head down, ramped up the intensity, and started working toward the leader.”

“I made a good pass for the lead around the outside in the infield section right before the halfway caution. After that, I just tried to keep clean and stay out front. This was very hard with the rough track conditions of Antigo clay oval. Ultimately, I came out on top for Saturday’s race in the Alumi Craft buggy!” 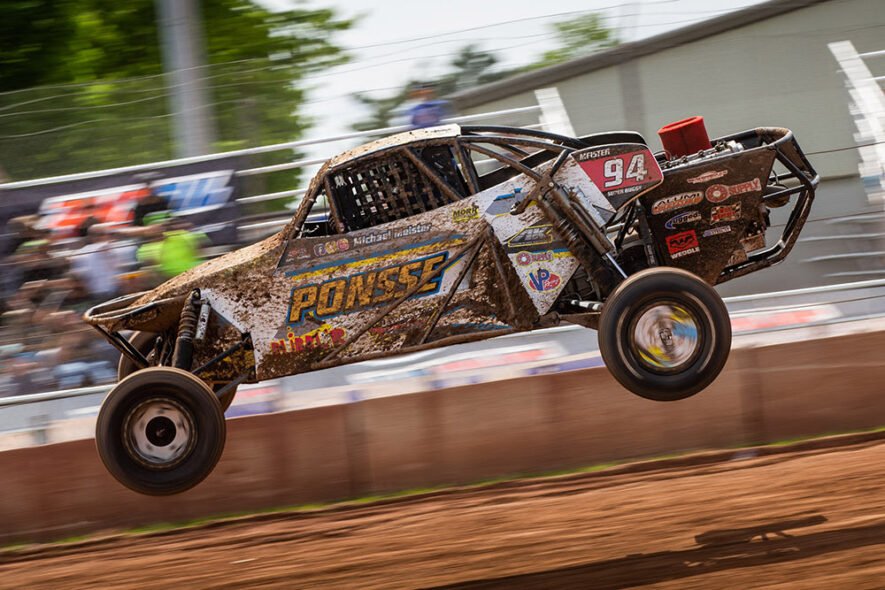 “Sunday, I had another solid starting position in 4th place from Saturday’s top 4 finish after an invert. Right at the start, I knew something was wrong where my buggy was revving out too fast and losing acceleration midway through the straightaways. My shifting linkage was not letting me go into 4th and 5th gear, so the entire race, all I had was my 2nd and 3rd gears.”

“Luckily, the shorter track did not drop me back too far. I was trying to keep my 3rd position through most of the race. On the final lap, I got a run off the oval corner and made a run for the lead while my engine bounced off the rev limiter. It was a great battle between the top 3 of us in the entire race, close and clean back and forth passing. I finished the race in 3rd place, which ties me for the points lead going into the next race. It was an all-Alumi Craft podium sweep on Sunday! The cars handled the rough and wet conditions with no problem showing a dominating performance.”

“The 2022 COR season opener was a successful one for Steinhardt Racing. Our practice went well on Friday, setting the second-fastest lap and not far off the pace of the quickest lap time.”

“For Round 1, I started in the 8th position with the draw. I was able to make my way up to third before the halfway caution. After the restart, I was able to run with the leaders but not make up any ground on them and ended up on the podium in 3rd place.”

“We made tire and suspension changes to the Argonne Lumber/KristenAmbos Team Alumi Craft Pro Buggy for Round 2. With a good pill draw, I would start outside on row one.”

“I ran with the leader and was able to be in a position to capitalize on a small mistake and take the lead just before the halfway caution. After the restart, I was able to hold off two other very fast Alumi Craft cars and bring home the win. I am looking forward to Crandon for Rounds 3 and 4. We are tied for the points lead!” 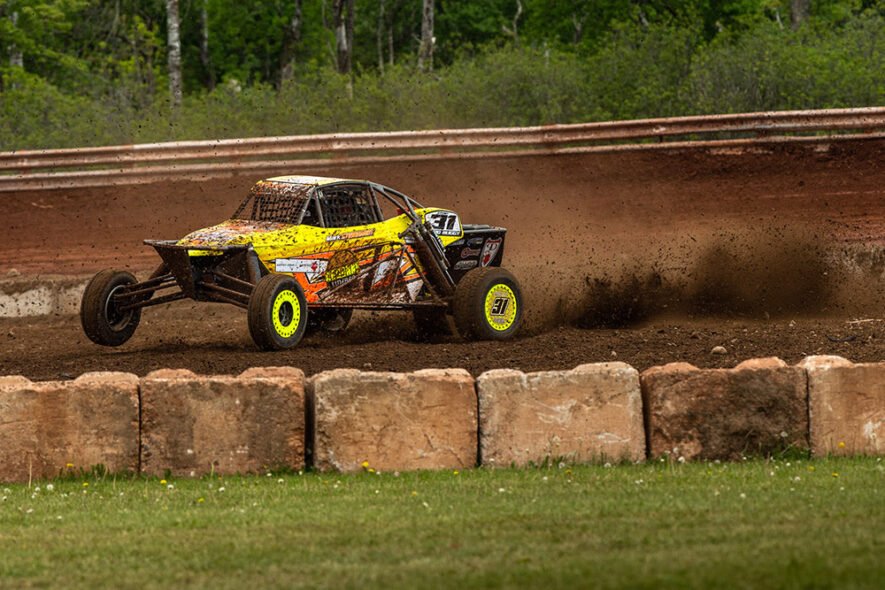 From coast to coast, racers in the rough deserts to the slick short course know Alumi Craft is the choice of winners. If you require a competitive and fast vehicle capable of winning, call Alumi Craft Race Cars for an expert consultation on what it takes. Give Alumi Craft a call at 619-596-9841 or go to: http://drivealumicraft.com