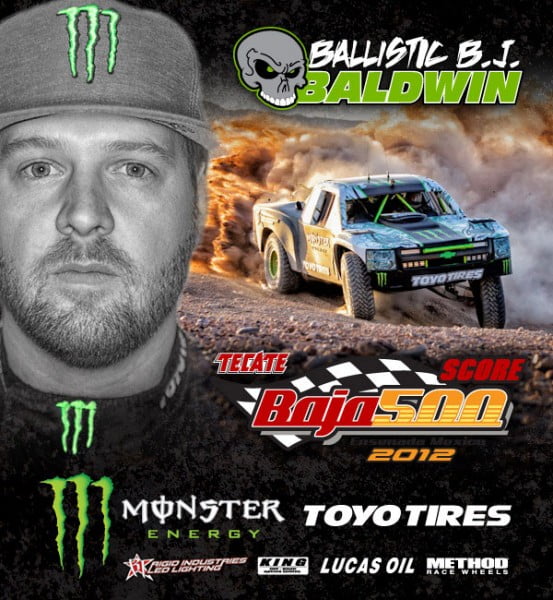 Bj Baldwin set out to dominate at the Baja 500 in Ensenada, Mexico. He spent days prerunning the course to learn every bump and turn as well as humanly possible to give him an edge on race day. The effort paid off when he was forced to make his wounded truck live for almost the entire race. At just mile 90 of a 450 mile race his transmission began slipping in third gear. BJ was faced with a choice; stop to change the transmission at the next pit which would have took 50 minutes and get passed by the entire field of Trophy Truck drivers, or back it down and roll the dice. See if he could at least finish in the top twelve so he would be included in the drawing for starting positions at the Baja 1000. He found that the first two gears were working fine; it was only top gear that was giving him trouble. With the crew willing and able to make the swap the tough choice was made to continue the race at a slower less competitive pace. 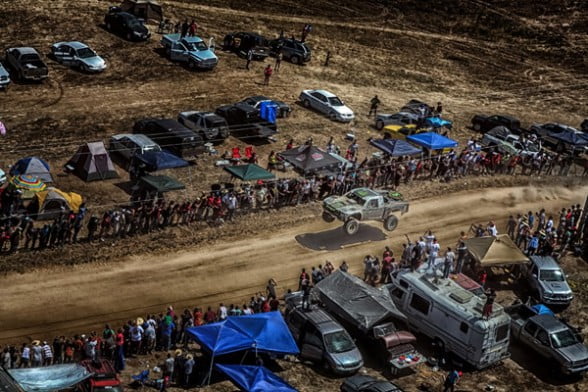 That’s where the hours spent prerunning came in handy. BJ had to carry his momentum, he could not rely on quick acceleration to pull him through the corners and reaching the trucks top speed of 140mph was impossible. He had run most of the high speed sections three times before raceday. The information he amassed and the familiarity with the course that he gained allowed him to confidently go through every corner at the highest speed possible. He quickly fell into a rhythm as he swept through each corner and before he knew it, found himself out front with a twelve minute lead. The gamble paid off better than anyone had thought but with miles to go several drivers were running strong and would use the more technical sections heading into the finish to close the gap. 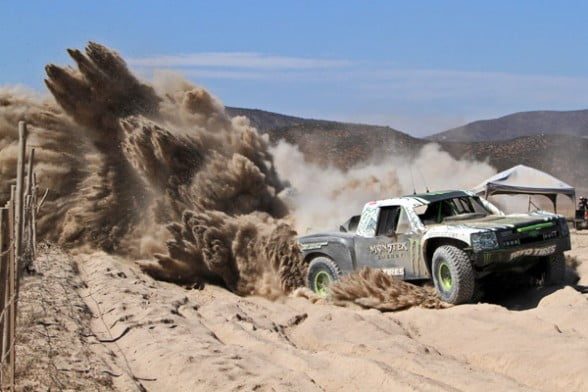 As the miles counted down, word came over the radio that Rob Mac had some problems but that Bryce Menzies was making his way through the pack. BJ was first on the road which made things even more difficult. The section heading into the finish was a “No Prerun” area before the race for safety reasons. With no knowledge of that section and no tracks to follow BJ missed a turn in the last few miles and if it wasn’t for a helpful fan it would have cost him dearly. Back on course he made his way to the finish line and the waiting began. Every agonizing second that passed added to the teams hopes that they might pull off the victory. Bryce came flying into the last turn and in his haste, spun out. He got pointed the right way and crossed the line stopping the clocks. After a long day of racing that covered every type of terrain that Baja has to offer the win was lost by only 11 seconds.

“I definitely would have liked to win again but we had to play the hand we were dealt” said BJ, “Considering that the transmission has been slipping and we haven’t been able to run 100% for the last 360 miles I think we did pretty good. As agonizing as it was to hold back and make the truck live I know we did the right thing. If I drove any harder we would be in the desert right now changing a transmission. I’m very happy with our results. We made the very best out of a tough day and we almost won with a wounded truck. My hat is off to Bryce and his team. Congrats to them. They had an awesome race.” 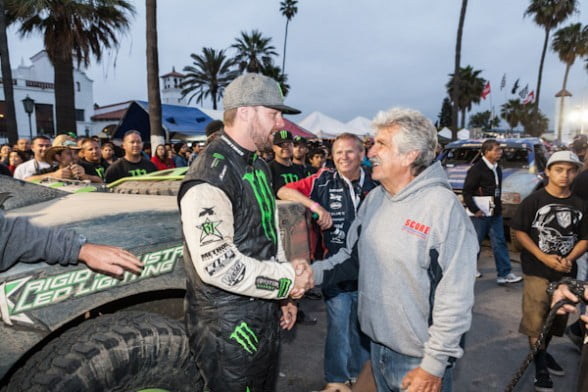 About “Ballistic” BJ Baldwin
BJ Baldwin is a veteran off road racer that has competed in all different types of off road racing. He holds 4 Championships in the last 6 years with several race wins including the Baja 500 and a Dakar rally class win. With 15 years experience and having competed in over 100 desert races BJ and his team are taking off road racing to the next level.

B
Brian Binkert
Good job. The way the story was told it reminded me of David and Goliath