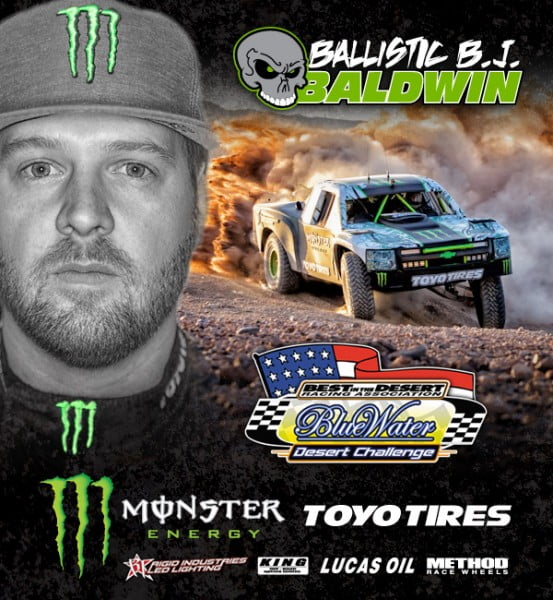 With the Baja 1000 quickly approaching, BJ Baldwin decided to do a full prep job on his truck “Fedor” and break out his trusted SPD truck “Rampage” for the Best In The Desert, BlueWater Desert Challenge. The BlueWater Desert Challenge is a two day event that tests racers against a shortened version of the famous Parker 400 race in Parker, Arizona. 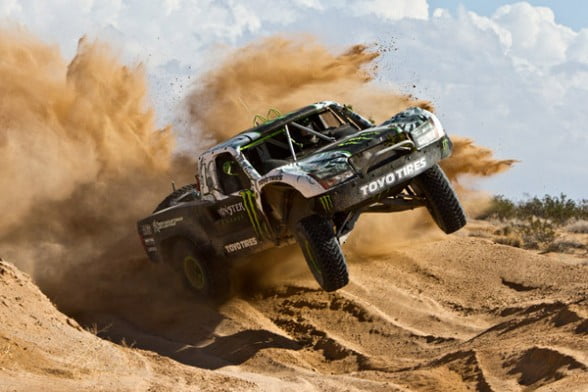 There would be five heat races on Saturday and then again on Sunday. Each heat consisted of three, 26 mile laps. The course was shorter but definitely not sweeter. In fact, the increased traffic made the sand looser, the silt deeper and the course much rougher. The racers would have to charge through the dust on a course that changed drastically each lap. The key to going fast is to pick the right lines and get into a rhythm. Neither is possible when you can’t see the rocks through the dust and it’s completely different every lap.

BJ began the weekend right by out qualifying Rob MacCachren for the number one spot. Starting out front is a huge advantage. Being the first truck off the line means that you don’t have to take risks passing other Trick Trucks until later in the race. Passing in the thick dust is difficult. “My old truck is very competitive,” said BJ, “It drives different than “Fedor” but it’s still fast. “Fedor” is low to the ground so you can get real aggressive in the corners. “Rampage” accelerates a little quicker.” 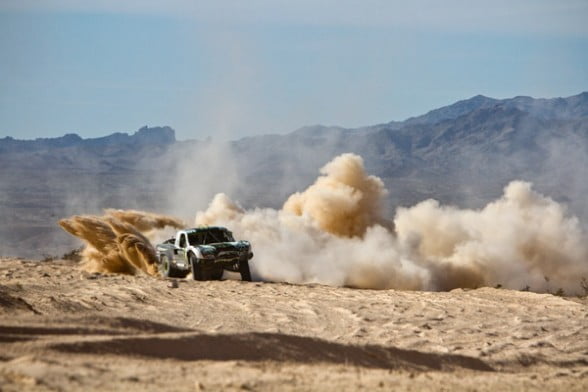 The Trick Trucks would race in the final heat both days. Being the last race of the day insured that the course was good and rough by the time they lined up. The many heats throughout the day created deep ruts, big holes and kicked the rocks around. “I started out front and just cruised around for the first two laps,” said BJ, “I lost about eight seconds to Rob on laps 1 and 2 so I drove much harder on the last lap. I got around some lapped traffic and picked up a minute twenty on time. I was five miles from the finish when I blew a corner and smashed a rock the size of a microwave oven. I hit it with the left front at about 85 miles per hour; immediately destroying the tire. There was no time to change it and with the finish line close, we decided to drive on it. Driving through the desert at high speed on 3 tires is very violent. At 70 mph, the rim was throwing chunks of rubber and dirt 80 feet high. We almost crashed twice trying to drive it that last 5 miles on the flat but it paid off. We won Saturday’s race by a mere 2 seconds!” The truck seemed fine after the race. The tire was replaced and after a check of the vitals, it was parked until the next morning. 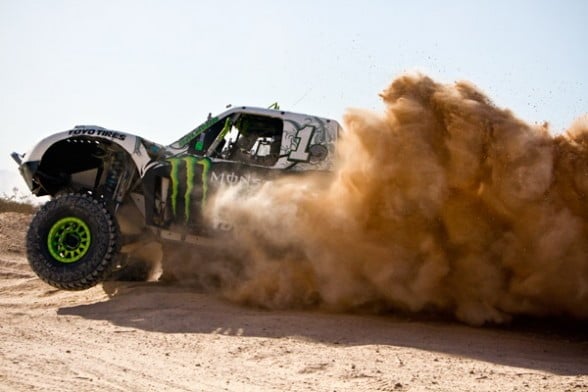 When the truck was fired up on Sunday, something was not right. The tone of the engine was off. The crew found a bad sensor and replaced it. BJ started next to Rob Mac but was down on power. It wasn’t long before Rob Mac got by, he was running at full speed. “We were hoping the motor would live and it did,” said BJ, “We were still getting around the course until the power steering belt came off on the last lap. We stopped to put it back on and then finished the lap. With all the drama this weekend, we still managed to finish second so that’s OK.”

“Rampage” will be at the SEMA show doing demos and then some film work. “Maybe we’ll run it again in San Felipe,” said BJ. He is quickly shifting gears; leaving for some prerunning in Mexico in preparation of the SCORE Tecate Baja 1000. This will be the 45th annual race that starts on November 14th in Ensenada, Mexico and ends in La Paz. BJ starts seventh out of 40 Trophy Trucks so it’s going to be another great battle as they race down the peninsula.

About “Ballistic” BJ Baldwin
BJ Baldwin is a veteran off road racer that has competed in all different types of off road racing. He holds 4 Championships in the last 6 years with several race wins including the Baja 500 and a Dakar rally class win. With 15 years experience and having competed in over 100 desert races BJ and his team are taking off road racing to the next level.