After a tough weekend of racing at Crazy Horse Lake Havasu, Cody Rahders finished 6th place racing his #816 Cognito motorsports/ UTVunderground.com/ Polaris RZR570 in the Production 700 class and a respectable 8th place in his only appearance this season in the Pro Production class driving the #716 Magnum Offroad/ UTVunderground.com/ Polaris XP900.

In his first race the Production 850 class would start on rows one and two with Production 700 on row three and all rows started a minute apart. At the start of the 700 class, Cody rounded the first turn in 2nd place and was leading by the second turn. He then opened up an 11 second lead by lap two. “The course is so narrow at Havasu that passing is super tough. I caught the 850 class pretty quick and most of those guys were not backing down, I was losing time so I had to be pretty aggressive to pass.” Rahders recalled.

As Cody began to work his way through the 850 pack he was able to keep most of his lead, then on lap three as he passed the leader of Production 850 the #816 slowed considerably. “As I was passing the leader of 850 I don’t think he knew I was there. I went inside of him through a turn, he squared up and drove straight into my left front wheel hard, he looked pretty surprised. After that my steering was really loose and I knew we were done.” Cody then made it one about one 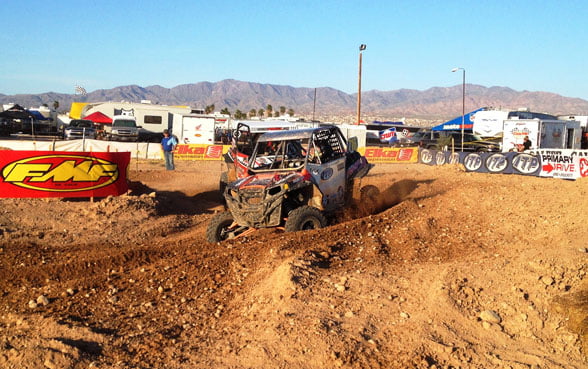 more mile before the steering rack completely separated from the frame ending his day in Production 700 but allowing him the chance to warm up during his walk back from the lower portion of the track to the starting line for the Pro Production class.

For the start of the Pro class Cody was lined up again on the third row and when the green flag waived he rounded the first turn in second but was soon leading his line after the leader rolled.

“The Fox Podium 2.5 shocks work so awesome, the XP was so comfortable that I just relaxed and laid down some laps. Things were going really good then I broke a wheel and that just killed my momentum.”

At the top of lap three he pulled in to the hot pits with a 2” hole in his left rear wheel, it was changed out and after reentering the race Cody decided it was time to run on cruise control and finished out the race.

“After my pit I could hear every scrape, rattle, and grind. We were given the XP to race the Lucas Oil Regional Series. The track was so beat up, there were broken cars everywhere and this XP900 is so nice I decided that I didn’t want to tear it up

anymore on this one race and just cruised to the finish to save it for the Regionals. Too bad I broke a wheel, my pit was about 1:20 and the difference between 8th place and 5th was 1:00 minute, could would shoulda right?” 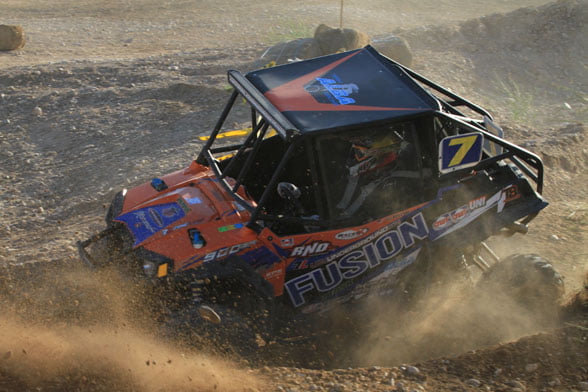 Another one got away! Running 3rd three laps into the race and starting to pick up the pace the Greg Row driving the #7 had a ball joint failure take him out of the race! “My Fusion, Alba, Black Rhino XP was on rails off the start, kept Beau and

Ryan within sight as l learned the track, after the second lap I started to gain confidence in the suspension and put the XP to the wood. Seemed the harder you charged the better the suspension handled, until the end of lap 3 when the ball joint failed. Same issue took out Beau, RJ and Eichner. I have to thank Fusion, Alba, Black Rhino, RacerX, Rigid, UNI, DWT, Factory UTV, Bilstien, PRP, Maxima, RND, Fineline Graphics” Row stated. 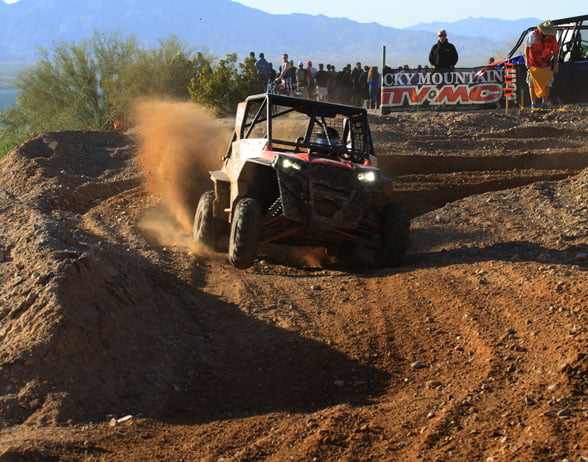 Can you say “dad needs to work some overtime!” We came out of WORCS Racing in Lake Havasu no longer tied for second in points, but sole possession of it. That’s the good news. Two destroyed wheels, two completely ruined rear caliper brake assemblies, crunched front pumper and a bent rear radius rod.

When we crossed the finish line with all our damage plus no brakes, we truly looked like we went to battle. We are not getting the finishes we would like, usually due to some sort of mechanical problem, but we have finished every race we have entered this year. That says a lot compared to years past. WE ARE GETTING BETTER!! Got to give a big shout out to Mitch Guthrie! I don’t have room to list all the things he has done to help us out this year, all I will say is he epitomizes what racing is all about, race to win, but help out a fellow racer along the way, with a smile and patience. Thank you Mitch. When we were having serious issues with our shocks this weekend, Randy Anderson from Walker Evans Shocks opened up a box and handed us two brand new rear shocks and said just “take these” Wow! Now that is what I call on track support. Like usual, Shawn at BERTS UTV will hook us up for what we need. Big thanks to all our sponsors: BLACK RHINO, RACER X, WALKER EVANS SHOCKS, BERTS MEGA MALL, TRIUMPH MOTORSPORTS, ERNIE THE ATTORNEY, ED THE SUSPENSION GUY.

At Black Rhino Inc. we have a passion for Side X Sides that is unmatched by anyone in our industry. We offer tons of products for ALL Side X Sides and a full showroom and website for your shopping convenience. We have a full service and installation center, an on-site fabricator, and a sales staff that is ready to help make your dream Side X Side a reality. Visit us today at 9303 Bond Ave. El Cajon, Ca. 92021 or log onto our website at www.blackrhinoperformance.com. You can also visit them on Facebook at www.facebook.com/BlackRhinoFanPage.

561-5000 or email him at [email protected]
For more information, please contact Papaian Enterprises, Marketing for Black