May 30, 2011, Cordoba, Argentina – Monster World Rally Team driver Ken Block and co-driver Alex Gelsomino headed to South America for their first visit to WRC Argentina and came away with their best-ever WRC stage finish this past weekend. Over the course of the rally, Block and Gelsomino attacked the notoriously difficult stage roads of the Argentinean country side at a promising pace, showing consistent top 10 stage finishes, until a broken driveshaft stunted their effort. Still the two pressed on, and upped the pace, eventually laying down speed on WRC Argentina’s SS17 that placed them 5th fastest, the team’s best-ever stage finish in a WRC rally. 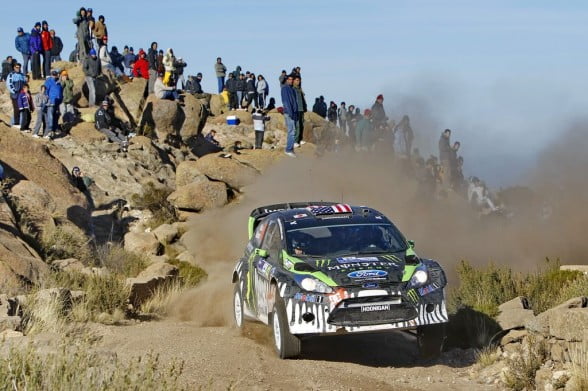 “I’ve loved being down here for WRC Argentina. If it wasn’t for suffering yet another mechanical issue on Saturday, I would have been on pace to score my first points of the season. So, missing out on that sucks. It wasn’t all bad though, on Sunday I took 5th on-stage for SS17, which is a personal best for me in the WRC. I’m definitely stoked about that. Plus the fans are absolutely wild and the stages have been incredible.”

Following a win in the heads up format of Thursday’s opening SuperSpecial SS1, Block and Gelsomino headed out on Friday in good shape and with the intention to run a conservative, steady pace. Block’s overall goal for the rally was simply to keep it clean, have fun and cross the finish line. By the end of Leg 1 on Friday, that goal was being realized as Block found himself sitting in 9th place overnight. Saturday however, would be less kind. After Friday’s reserved pace, Block decided to step things up as he gained back his in-car confidence following an eight-week hiatus from racing. Unfortunately, on the second stage of the day, SS9, Block suffered a broken driveshaft, which eventually forced a retirement on SS11.

However, Sunday morning brought a fresh chance to restart for Block under SuperRally rules. Unfortunately, on the first stage of the day, a slight off, which caused a tire puncture, cost the two 16 minutes. Despite this though, Block went on to lay down his best WRC stage finish to date on the next stage, placing 5th, while being about 3 seconds off of stage winner, and fellow Ford teammate, Jari-Matti Latvala.

“To have Ken driving at this level after being out of the car for eight weeks and pull off a personal best for a stage finish on these roads is massive,” said team manager Derek Dauncey. “He showed great poise on some very difficult stages and demonstrated great future potential for next year here in Argentina.”

The next WRC stop for MWRT will be ADAC Rally Deutschland, August 18-21. Until then, follow the team at monsterworldrallyteam.com, facebook.com/KenBlockRacing and facebook.com/MonsterWorldRallyTeam.

About Ken Block: Ken Blockʼs rally career began in 2005. His skill and car control became quickly apparent and Block aptly nabbed Rookie of the Year in the Rally America Championship. Since then, Block has continued to race in the series, boasting a healthy ten overall wins, in addition to numerous podium appearances as well as X Games medals. In addition to his performance in the car, Block has been a driving force in shedding light on the sport within the United States. His keen branding and marketing acumen has allowed Block to achieve global fame as a rally driver through his wildly successful viral videos, which include his record-setting jump for the TV series Stunt Junkies, his scenes in the DC snowboard video Mtn.Lab 1.5 and spy footage of his Subaru TRAX STI project in action, along with his Gymkhana videos. Ad Age named his “Gymkhana TWO” the No. 4 Viral Video of 2009 and his “Gymkhana THREE; Part 2 Ultimate Playground; l’Autodrome” the No. 6 Viral Video of 2010. In January 2010, he formed the Monster World Rally Team and signed with Ford to become the first American to campaign in the World Rally Championship, becoming only the second American to ever score points in the WRC during his inaugural 2010 season. Additionally, his signing with Ford included campaigning domestically in racing (Rally America and X Games), as well as continuing to do gymkhana. Block co-founded DC Shoes, a worldwide leader in performance skateboarding shoes and a renowned action sports brand.

About Monster World Rally Team: Created and assembled by Ken Block, the object of the Monster World Rally Team is to redefine the race-team archetype. The team is driven not only to win, but to also market motorsport through innovative, creative and interactive ways. The team is supported by Monster Energy, Ford Motor Company, DC Shoes, Mobil 1, Pirelli Tires and the Dirt3 videogame.