Last Saturday off-road racers said goodbye to the soundtrack of our lives.

It was a packed house that assembled in Anaheim to remember, honor and celebrate the towering persona of legendary Bob “Weatherman” Steinberger. Many of our sport’s most familiar faces came to help the extended Steinberger family cope with their loss, but also to reflect on a life exceedingly well lived. 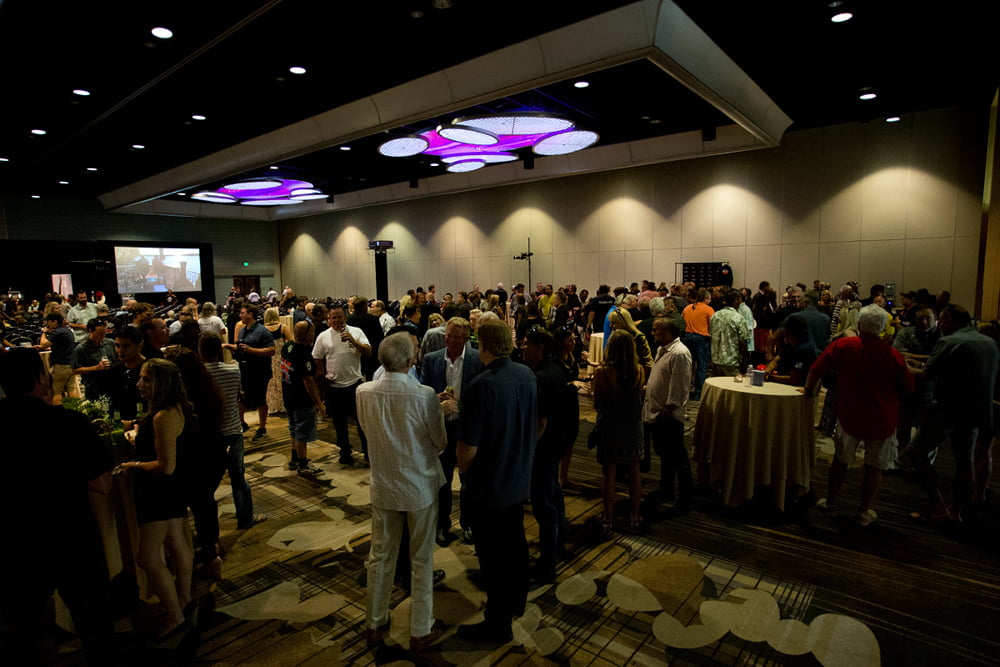 The Steinberger family has been a staple to the off-road world for as long as many of us can remember. They asked a same group of us to say a few words and share our hearts. I was honored (and certainly humbled) to be included, and Race-Dezert.com then asked me share my words with our audiences. Here, with a few post-event edits, is my story.

“I would bet that nearly all of us here have a great Bob Steinberger story. I am sure we will hear some of them today, but it seems appropriate to also look at his life from the 10,000 foot observatory that I seem to spend so much time in. 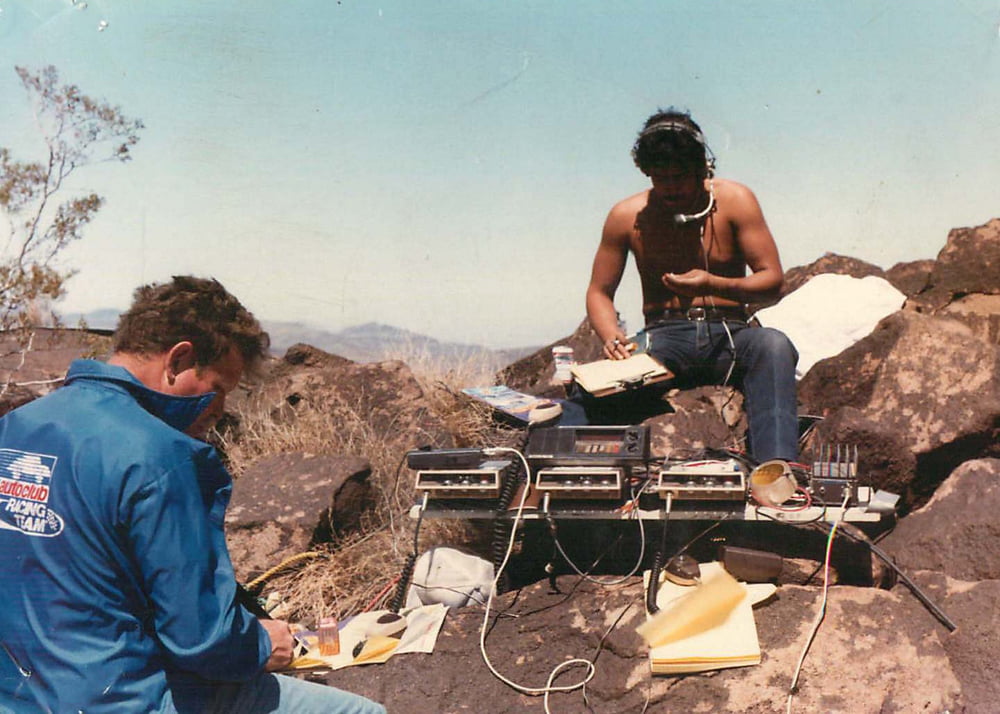 Someone much smarter than me once observed, “Words are the voice of the heart.”  For so many of us, while we may not have spent a great deal of personal time with our friend Bob Steinberger, we knew the size of Bob’s heart because we all heard his words.

It has been said that sound has a profound effect on the senses. It can be both herd and felt. Sound can paint a picture, produce a mood, trigger the senses to remember another time and place.

And so it is with the Weatherman.

Think about it. Besides keeping us safe, his was the voice of our culture, no different from a Chick Hearn with the Los Angeles Lakers or Vin Scully with the Dodgers.

Or, maybe he was just the Don Rickles of off-road racing.

Bob Steinberger brought us all back to an experience enjoyed by your grandparents or great grandparents. On Saturday night everyone would gather in the living room at night and sit around watching their radio. 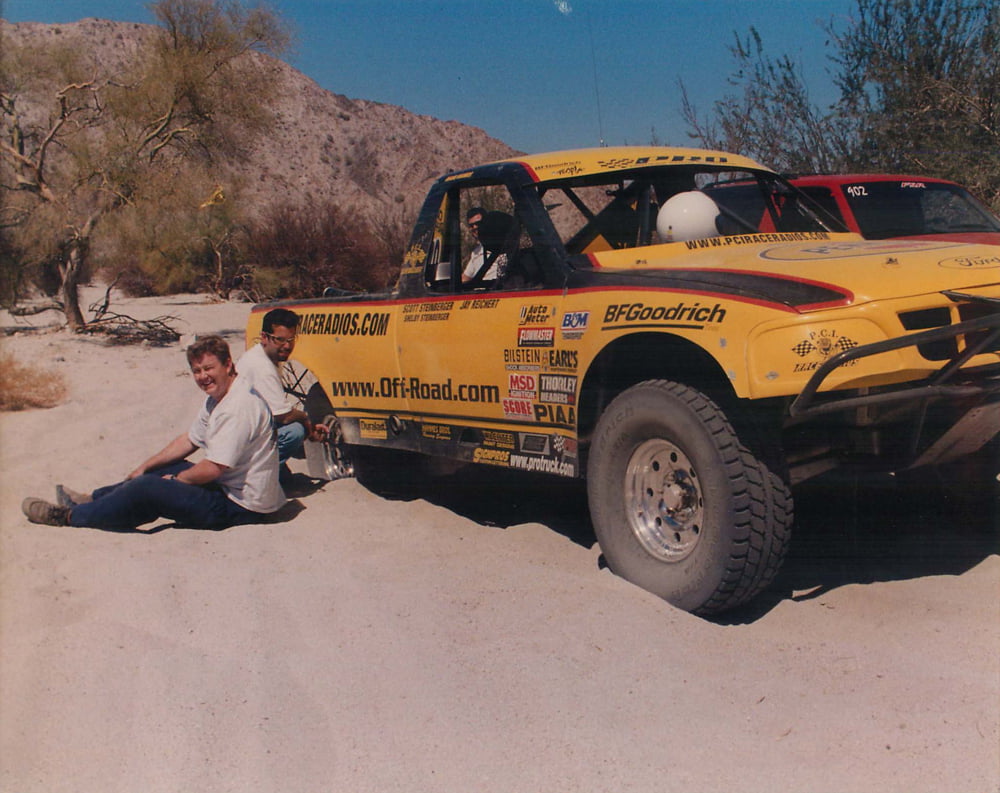 We spent a lot of Saturday nights sitting in our chase trucks, trying to stay warm – and just staring at our PCI Race radios while eating beef jerky. In a time before sat phones, cell phones or live tracking, we sat and waited for any and all words spoken from a tireless Weatherman.

In later years we would also sit around and watch our computers, with technology bringing Bob’s unique sense of humor and drama right to our desktops or IPhones.

The thing is that, to me, the secret to Bob Steinberger’s legend wasn’t that he was behind our efforts to go racing, but instead he as above it. 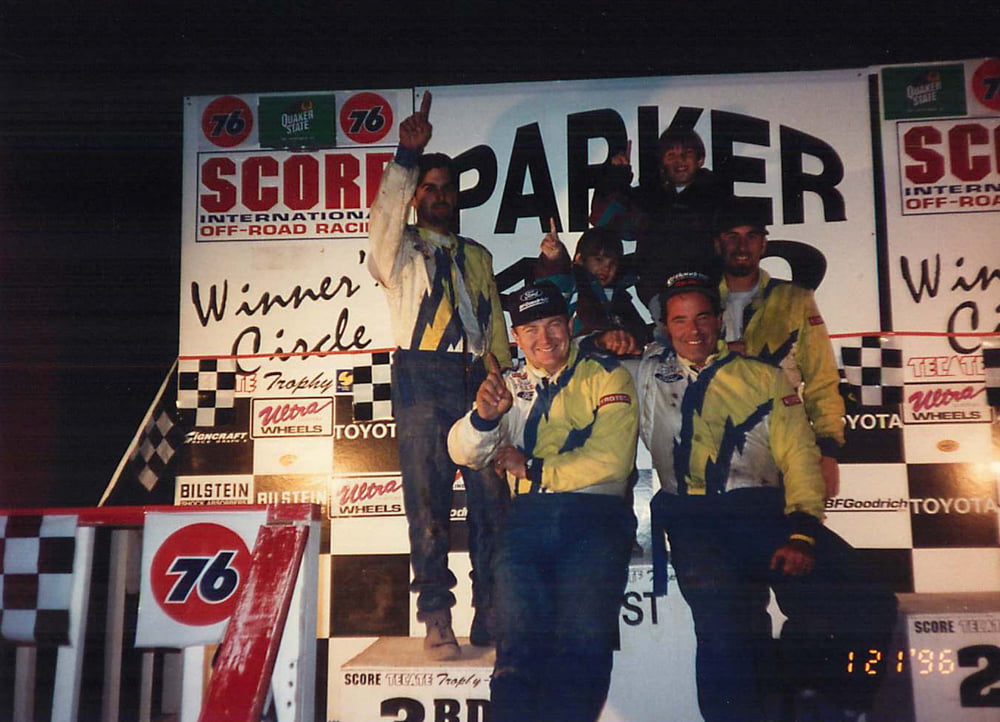 It’s hard to believe that it has been nearly 10 years since we celebrated the SCORE International’s 40th anniversary at our 40 Years to Glory event in Long Beach. For those that were there, you’ll remember that we opened the evening with the Weatherman perched high above the stage and the crowd on a crow’s nest we brought in just for him.

It all seemed so appropriate, and, thankfully, Bob agreed to kick off the whole thing in a way only he could pull off.

The sense that the Weatherman was found above us all was made stronger when we filmed Dust to Glory in 2003. There was never a doubt that Bob was going to be one of our key storylines, and the drama of his unique contribution to desert racing needed to be played out on the big screen. 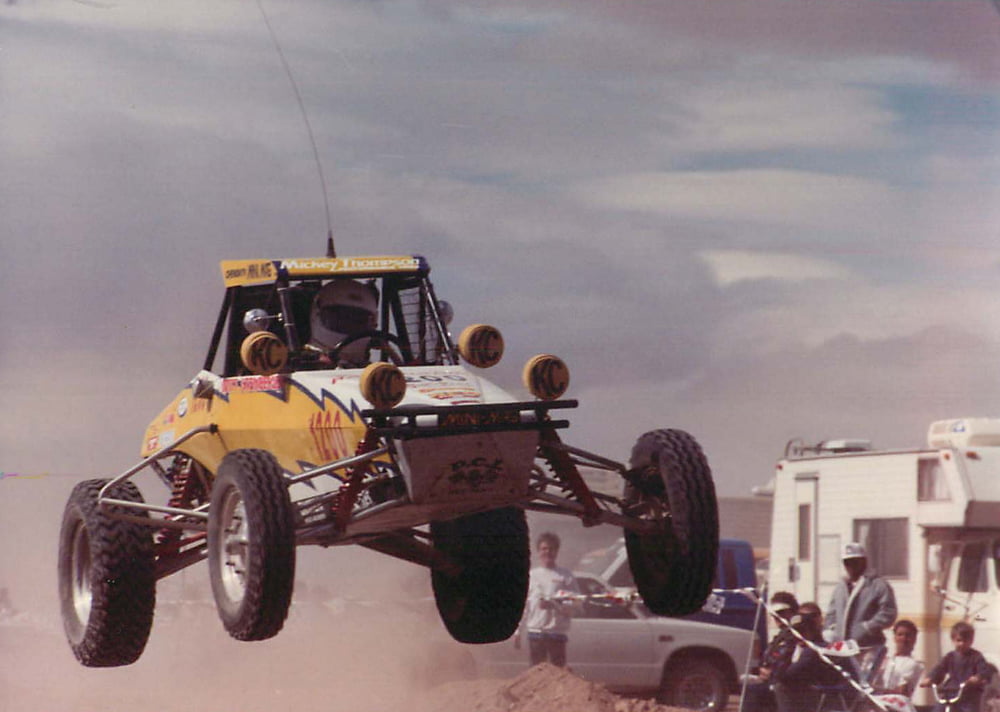 We set up on that mountaintop and captured what made Weatherman so special.

Outside of Johnny Campbell giving that young local his jersey in the heat of battle, it was the Weatherman scene that has remained with me the longest. It was sad and poignant and heroic all at once – and made the story we were telling so much more than just about racing. It was about humanity.

Both physically and metaphorically, Bob Steinberger’s gravel voice filled the air space above our vast desert sandbox. His was the soundtrack to the best adventures of our lives.

This was especially true in his beloved Baja peninsula. 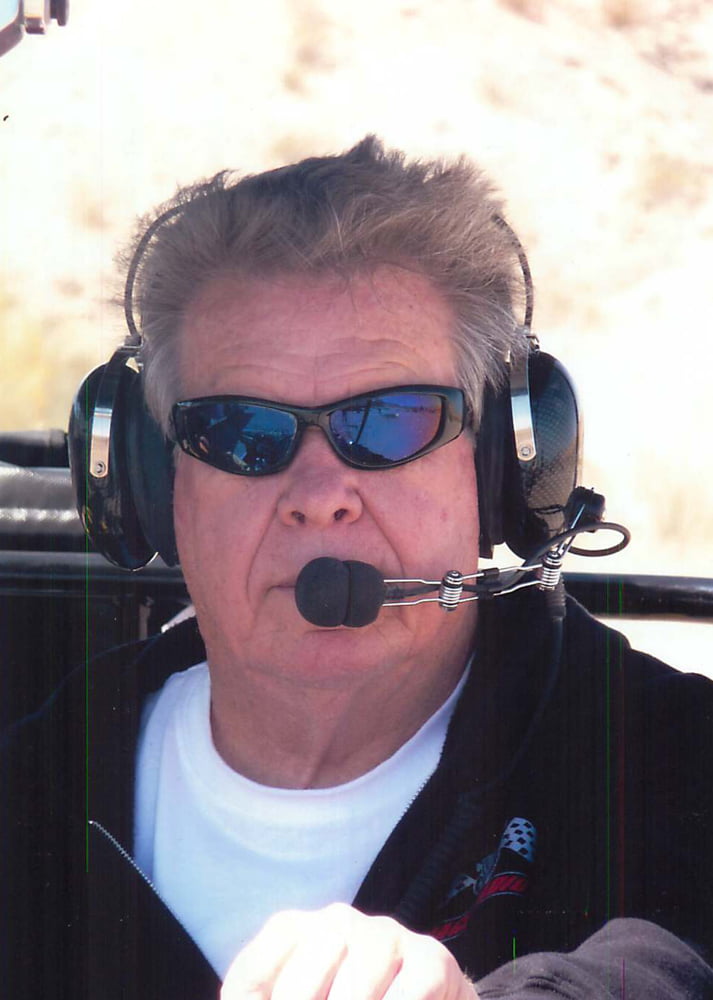 For those of us old enough and brave enough to admit it, when we first started Baja racing we needed the Weatherman for much more than status updates.

If your story is anything like mine, in the early years our Long Beach racing team was lucky to make it to Baja with a barely completed race car and 20 minutes of testing. We didn’t have the time or resources to pre-run, let alone have a pre-runner.

So our first exposure to Baja racing was from the driver’s seat, armed only with a BFG map and some arrows and ribbons along the racecourse. That’s it.

Yes, that does kind of sound romantic. But if you take off the false pride I would guess deep down you were as terrified as you were thrilled. That fear was only made worse if you were driving at night, which I did, or you were driving a single-seater, which I also did. 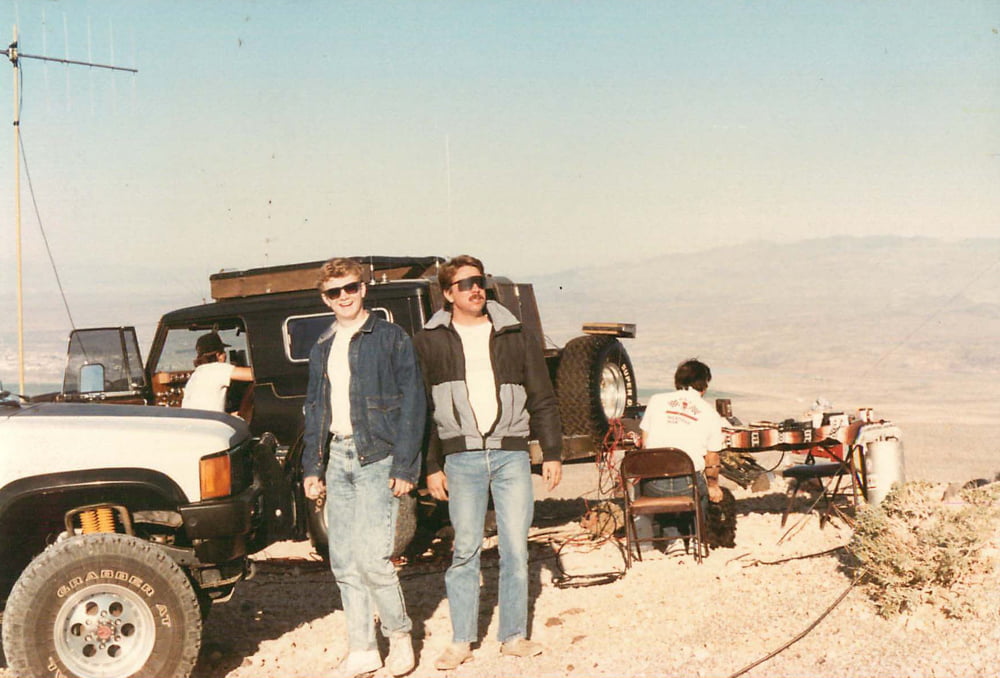 Truth be told, the fact that the Weatherman was out there in that air space, hopefully ready to help guide, or support or advise, made those early races seem a whole lot safer. We were not alone in that dark good night.

And that is really the lasting legacy that Bob Steinberger left behind. While the top racers like Ivan, Walker, Larry or Robby all knew the Weatherman, the fact is that outside the very earliest days of our sport his contribution wasn’t to the stars of the sport.

No, the Weatherman belonged to guys just like us. The little guys who had no real idea what the hell they were getting in to.

When our sport lost the late great Casey Folks earlier this year, I was asked to write an “In Memoriam” piece for Race-Dezert.com. In it, I wrote… 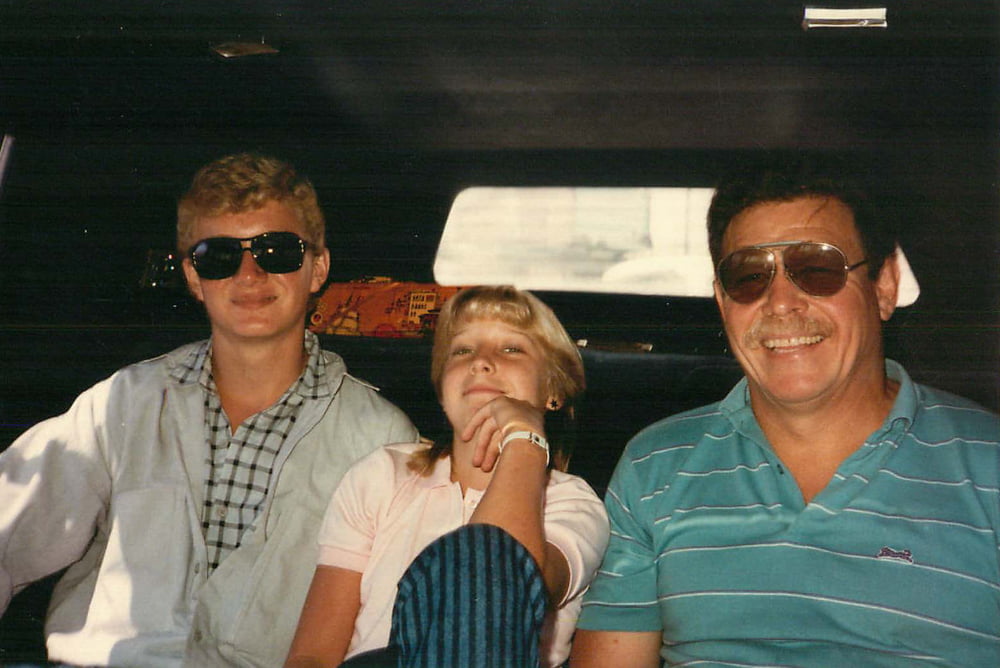 “How lucky must a human be to look back on a life not spent on the mundane and ultimately meaningless pursuit of work, but rather in providing adventures and memories of a lifetime? What a legacy to leave.”

Bob Steinberger gave so much to so many for so long. He made our memories come alive as much as Casey or Walt Lott or Sal Fish.

The children, grandchildren and friends of Bob Steinberger can take solace in the fact that he not only made your lives better, but made ALL of our lives better — and funnier — all at once.

Vaya con Dios Weatherman. Somehow all of us know you are not behind us, but hanging out above us just like you always have.”