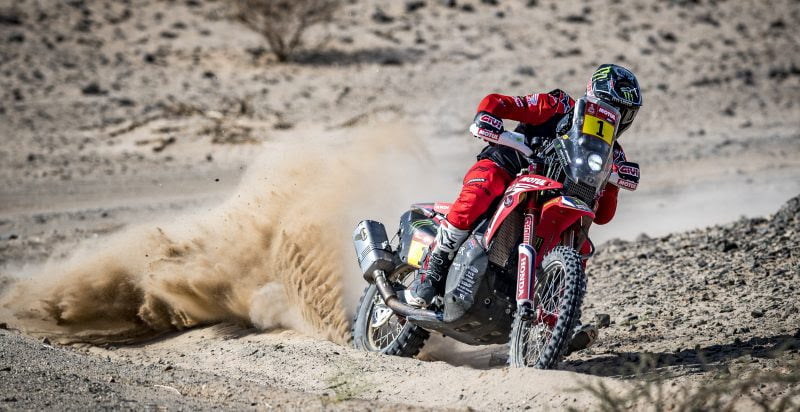 Riders Ricky Brabec and Nacho Cornejo are set to participate in the Sonora Rally in Mexico, due to get underway this weekend. The first rally after the past Dakar, will consist of five stages through the Altar desert in the northern region of the country, on the border with Arizona.

Ricky Brabec, as the current Sonora Rally title-holder, will be wearing the number one bib. The American will go in search of victory in a desert race ideally suited to his riding style. This seventh edition of the Sonora Rally will play out in the Altar desert – one of the most extensive in the North America continent – with its nerve centre located in the city of San Luis Colorado. After the technical and administrative checks on Sunday, May 9, the action will get underway with a total of five stages, the first on May 10, with the event wrapping up on May 14.

Monster Energy Honda Team will, for the first time, line up two of their riders to undertake the challenge. In addition to Ricky Brabec, champion in 2020, Chilean rider José Ignacio Cornejo will accompany the team, led on this occasion by rally ace Johnny Campbell: “I feel very honoured to support and coordinate the race team for Monster Energy Honda Team and HRC in the Sonora Rally ”, states Campbell. “In addition to defending champion Ricky Brabec, team-mate Nacho Cornejo will join us on this great adventure. It will be great to have him with us and it should make for a very interesting race!” concludes the American cross-country rally legend. Ricky will be wearing the number one on the fairings while Cornejo’s Honda CRF450 RALLY will sport the number four. Both will be taking part in the Rally Pro category.

This time out, participants will be issued with a digital road book each morning before the start, indicating the challenges they are about to encounter. The instrument has likewise been confirmed for use in the 2022 Dakar Rally.

At the EICMA show, Honda will exhibit the team’s competition bike, the CRF450 RALLY, set to compete in the forthcoming Dakar Rally. It can be found on the Honda stand located in Pavilion 22, Stand O 48. The EICMA Motorcycle Show will be open to the public from November 7-10.