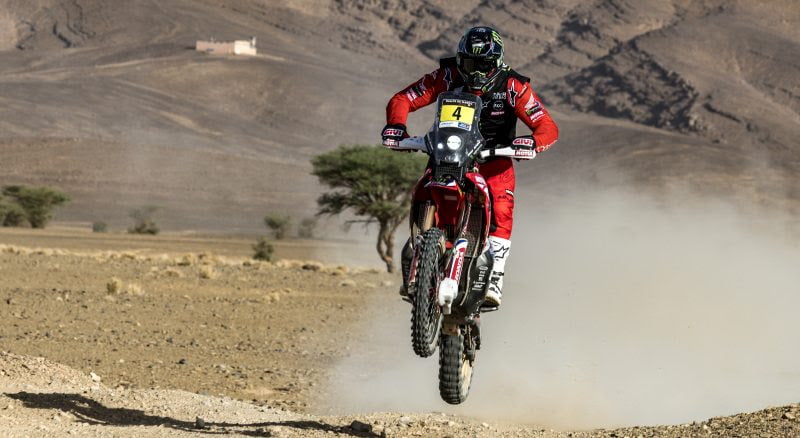 The Rally du Maroc has reached its midway point with Ricky Brabec claiming the stage win and the overall lead. Once again, a lengthy, high-speed, full stage with little navigation, although the sudden changes in pace and the lightning speed needed to make correct decisions led several riders to make mistakes.

At last night’s briefing, David Castera, the Rally du Maroc director had revealed what riders could expect from this third stage: fast tracks, some stone-filled, but others sandy and undulating which would really give the bikes the chance to let rip. This time round, there were fewer dunes which were smaller in size and presented no major difficulties apart from two short stretches of broken up dunes at kilometres 149 and 192. Nevertheless, navigation proved tricky for some of the riders and the 341-kilometre timed special stage caused some reshuffles in the general standings.

American Ricky Brabec was the leading protagonist of the day. The Monster Energy Honda Team rider, with some excellent navigation, set a white-knuckle pace that no other rider was able to match. Brabec not only won the stage but also snatched the overall Rally du Maroc lead with a ten-and-a-half minute advantage over the nearest second-placed rider, team-mate Pablo Quintanilla.

Chilean Quintanilla took advantage of his starting position to excel once again today. The Chilean followed in the wake of Ricky Brabec and, despite a minor navigation error, posted ninth place, meaning he now holds second spot in the general standings.

For José Ignacio Cornejo it was another steep learning curve in today’s tricky environment. After a slight lapsus early on, he picked up the pace until the critical point of the day, among those dropping several minutes on the stage.

If it was heads for Brabec, it was tails for Joan Barreda. The Spaniard from Castellón was keen to make up time today and proved fastest until around kilometre 240, at which point he dropped time due to a navigational blunder. The rider, after some moments of disorientation, was able to get back on the right track a few kilometres further on, although having skipped a waypoint which he has been penalized for.

Early tomorrow morning, the fourth and lengthiest stage of the Rally du Maroc gets underway: 367.43 kilometres against the clock out of a total trek of 546.30 kilometres. For the third time, the action will play out across the wide area to the east/northeast of the town of Zagora.