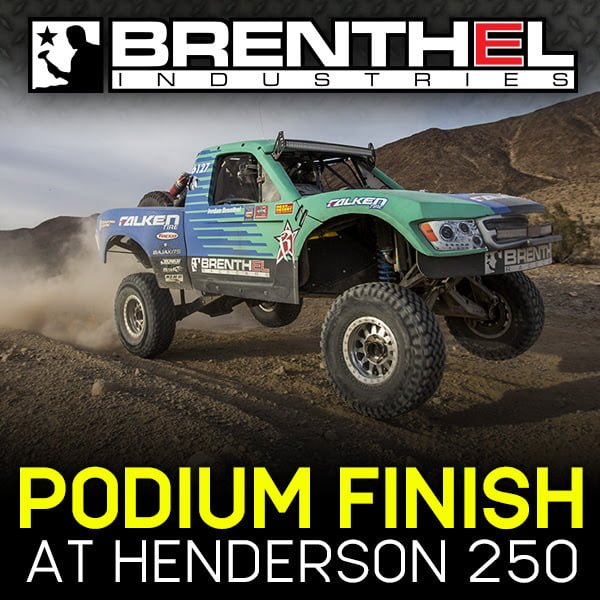 The old saying goes “third times a charm” and that was the case for Jonathan Brenthel at the final race in the Best In The Desert series; the Henderson 250 in Henderson, Nevada. Brenthel Industries builds a wide range of competition vehicles and in order to test the limits of the trucks and cars they build, Brenthel competes in multiple race series. They push their vehicles harder than anyone in the toughest conditions possible to find the limits of performance. Only one week after fielding two trucks at the SCORE Baja 1000, they were at the Henderson 250 with the Falken Tire 6100 truck for another race.

Jonathan, with Brother Jordan navigating, was on the pipe from the drop of the green flag. He railed the first turn after the start and planned to do the same in turn two of the twisty starting section that resembles a slot car track. He went even deeper into turn two, but it was much softer; the truck tipped over on the side. As they sat, still strapped in on the side of the track, their race strategy was changed to plan B. Instead of gapping the field in clean air out front, they would have to climb up through the field in the choking dust and merciless rocks on the Henderson course. 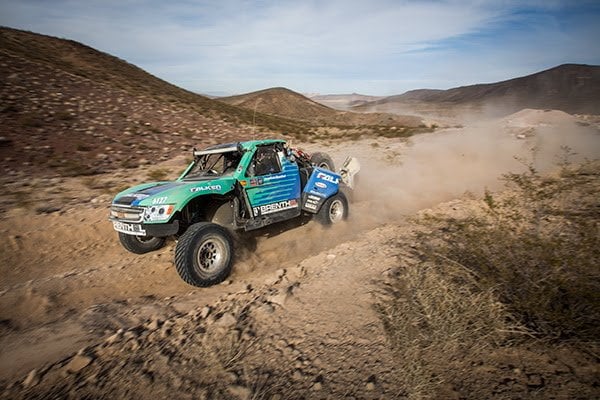 Once back on four wheels, they were dead last in their class. They picked off six trucks in 50 miles but as you move up through the field, the competition gets much tougher. There was little breeze out on the course so the dust was sitting in place like a bank of fog. Pulling out to pass was risky but sometimes the only option. As they dropped into a sandy wash, the dirt changed to sand and they got a brief glimpse of, well, anything. They jumped out to pass and were met with a three foot tall boulder. The truck slammed into it, launching into the air. It’s incredible that their Method Race Wheel was not destroyed on impact or the front suspension ripped off, but they were slowly losing air from the Falken Wildpeak Tire. They stopped to change it out, dropping them back behind the trucks they had just passed. They would have to make their way to the front one more time. 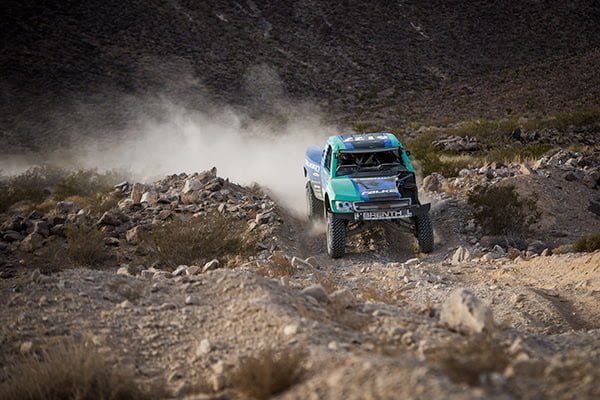 Despite the impact with the rock, the Brenthel Industries 6100 truck was still going strong. They had a brief moment when their damaged hood flew up, blocking Jonathan’s view at 115 miles per hour, but it shifted out of the way until the crew later removed it. “On lap three, we were running in third,” said Jonathan, “We had to make some risky moves to get there but we were able to settle down and run a measured pace. We have been practicing pit stops at the shop after hours and it really showed. The crew got us in and out of the pits all day. They got us past other trucks with their quick pit stops. We tried some new shock setting for this race and it really paid off. We told Iribe at King Shocks that we were going to try something different and he really nailed it with the shock set-up. Our suspension allowed us to overtake other trucks in whoop sections. They slowed down; we sped up. We will use any shocks that the customer wants, but we recommend Kings and run them on all our personal race trucks.” 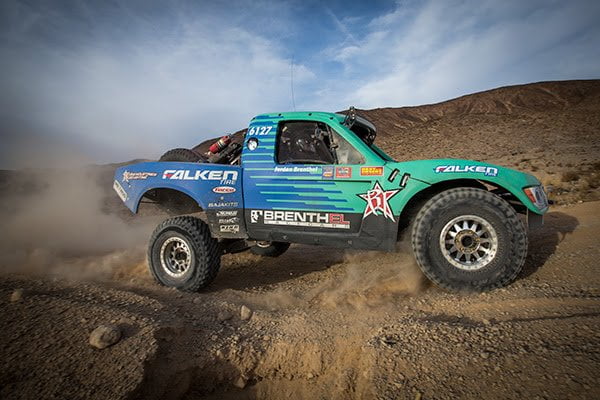 After taking the worst that the Henderson course could dish out, and climbing through the field twice, they brought the Falken Tire 6100 truck home on the podium in third place. It was another successful test with valuable information gained that they can pass on to their customers. At Brenthel Industries, customer service is a major priority. Everything they build is created using state of the art CAD programs and then proven on the race course; Brenthel Industries leads the way by design. Their depth of knowledge and nimble manufacturing process allows them to work outside the box when it creates a better fit for the customer. Any job you have, big or small can benefit from Brenthel’s meticulous engineering and careful craftsmanship. Go to http://brenthelindustries.com or http://www.bajakits.com to find out more about the many services, highly developed suspension systems and race-proven products available from Brenthel Industries.