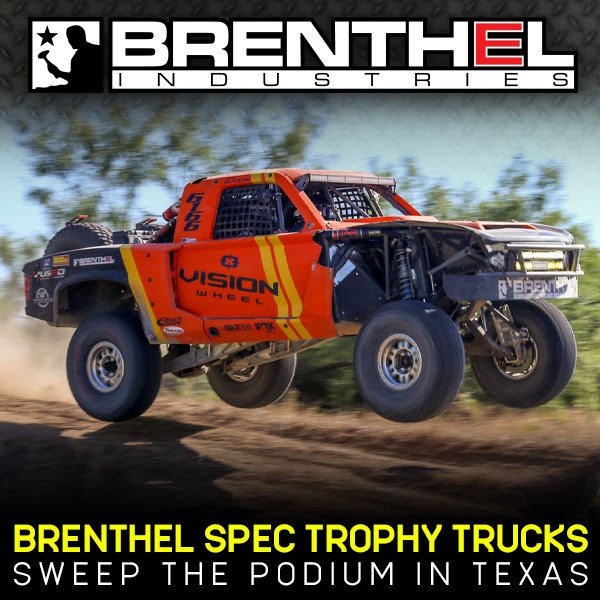 Brenthel Industries Spec Trophy Trucks have won at every event so far this year and this event was no different! Brenthel made the haul to Blackwell, Texas, to compete at the Texas Desert Racing Association’s (TDRA) 2020 Race To Midnight. Brenthel Industries supported drivers brought the heat and swept the podium with Jeff Bader and Dan Fresh in the #6166 taking the win, Sterling Miller in the #6186 placing 2nd, and the #6173 of Jordan Brenthel landing in 3rd. Less than 3 minutes separated all three teams and revealed just how hot the racing was.

The TDRA Race To Midnight event was held on private land at Texana Ranch, a sprawling 5,000 acres owned by the Beal family who happened to be well-known off-road racers and part of the God Is Awesome Race Team. The land itself is part of a big game reserve and features over 30 species of exotic animals, including Wildebeest, Camels, Buffalo, and Zebras. Racers were welcomed to accommodating pit sites, RV hookups and a swimming pool, which came in handy as the daytime temperatures were triple digits. 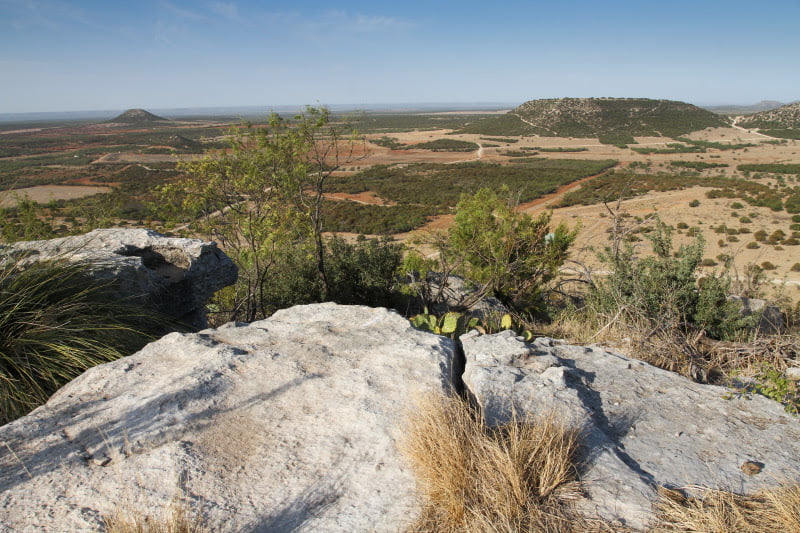 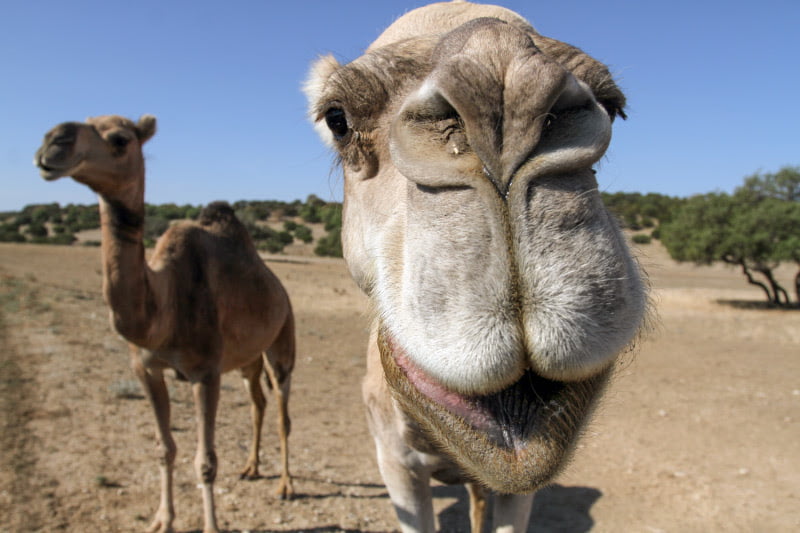 The Texas Desert Racing Association is in its 8th season and hosted over 60 competitors, the biggest turn out so far with 10 Spec Trophy Trucks filling out the largest class. The event consisted of 4 laps around a 40-mile course and a designated a 2.5-mile track for the timed qualifying session preluded by a parade lap.

Dan Fresh was the wheelman of the hour and picked up the fastest time to give the #6166 the pole and clean air to start the race. Jeff Bader shared driving duties with Dan and commented on the weekend; “Jonathan called me the week before the race and asked if we would like to go. Given that we have no idea when our next race might be, we decided to do it. We flew out and upon arrival, we got greeted with a heatwave that only got worse over the weekend. However, it is a good pre-race scenario to help prepare us and the equipment for BITD’s V2R (assuming it happens) as it is known for scorching conditions.”

“Qualifying went very well and we got the pole,” Bader went on. That set us up for a green to checker race, which was new for us. The downside was we did a driver change when no other teams in the top 4 did, so that put us at a slight disadvantage. I got in for Lap 3 with a 2-minute lead and tried to maintain that lead but ended up hitting a cattle fence. The result sounded like we had blown a tire and both myself and Brian, the navigator, got out to see that we only bent the rear body panel into the tire. I tore off part of it and we hopped back in the truck.”

Jeff continued, “After I finished Lap 3, our lead was cut down to only 11 seconds. When I heard that on the radio, I decided we did not come all this way to get 2nd and found another gear in the truck. I was able to extend the lead back to over 1 minute ahead by the end of Lap 4 (finish) to get the top spot. All in all, it was a great experience with great people that were very hospitable, and we came home with our first 1st place finish!”

“The Race to Midnight was a success,” Dan Fresh stated. “It was another awesome race sharing the wheel with Jeff. We started the weekend on the pole in qualifying and then taking home the win was epic! It was such a tight race and the battles were super fun. Thank you, Brenthel Industries, for giving us a great truck.” The #6166 total time on course was 3 Hours, 47 Minutes, and 38.616 Seconds. 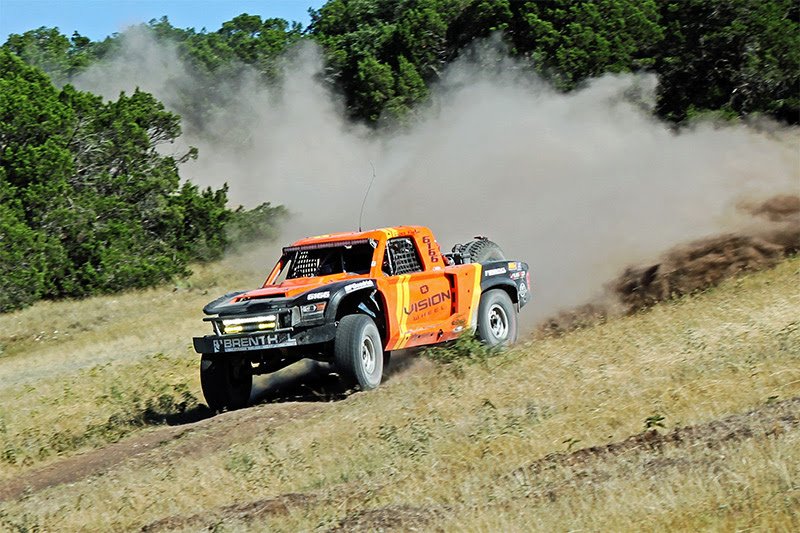 In the #6186 Brenthel Industries truck, Sterling Miller earned a well deserved 2nd place podium with a finishing time of 3 Hours, 49 Minutes, and 1.676 Seconds.

“The Texana Ranch Race To Midnight was a fun yet very technical course,” Miller confirmed. “With a few of the 6100 class trucks not completing the race I think it speaks for itself on how rugged & challenging this course was. My co driver Austin Nesloney was flawless calling the shots. We drove in heavy, sometimes blinding dust for over half the race & Austin never missed a call. Which allowed me to drive with confidence amidst the forgiving & unfamiliar terrain.”

Sterling resumed, “The Brenthel Gen 3 truck is a phenomenal machine and Austin & I have been diligently practicing & learning the capabilities over the past few weeks. Despite pushing the truck aggressively, the entire race the Gen3 experienced zero issues. At one point, we thought we had damaged the braking system on a large rock. Without hesitation, the Brenthel Team sprang into action to assist if needed. Luckily, we were able to continue racing after realizing we had sustained no damage. It was great knowing that if we had, they were there to keep us in the race. I purchased this truck one month before the race. I can’t say enough about the support from the Brenthel Industries Team. Jonathan & the guys have been accommodating with us being new to the sport and we are looking forward to growing in this sport with the Brenthel Team in our corner.” Jordan Brenthel represented in the #6173 truck and rounded out the podium within proximity to the leaders and finished in 3 Hours, 50 Minutes, and 10.592 Seconds.

“It was a great weekend for Brenthel Industries,” Jordan declared. “Our teams took 1st, 2nd, and 3rd place! That’s 4 Wins this year in Brenthel Industries Gen 3 Spec Trophy Trucks with three different drivers. This one was a last-minute decision to come out and I am glad we did. It was our first time racing with the Texas Desert Racing Association and we had a great time on a technical course. Congratulations to Jeff Bader & Dan Fresh on the win and Sterling Miller taking 2nd! I took 3rd in our team truck and it was a fun & close battle all day.” Brenthel Industries is the most direct channel to get into off road racing contention. They apply their collective knowledge in CAD design, welding, fabrication, assembly, plumbing, wiring and more into every design. Their race prep, chase support and Arrive and Drive programs have been developed with the benefit of their own extensive racing experience. When it comes to selecting a builder, you can compromise, or insist on the best; Brenthel Industries.

Go to http://brenthelindustries.com or http://www.bajakits.com to find out more about the many services, highly developed suspension systems and race-proven products available from Brenthel Industries.