Today marked the final day of the Toyo Tires Desert Challenge Presented by Monster Energy out here at King of the Hammers and the day was filled with lots of action. The T1 Trucks battled for a chance to win a $50,000 grand prize. In addition to the T1 Trucks this year Class 1 (B1), 4400 Cars (B1) and 6100 Trucks (T2) were invited out to have a grudge match of their own. 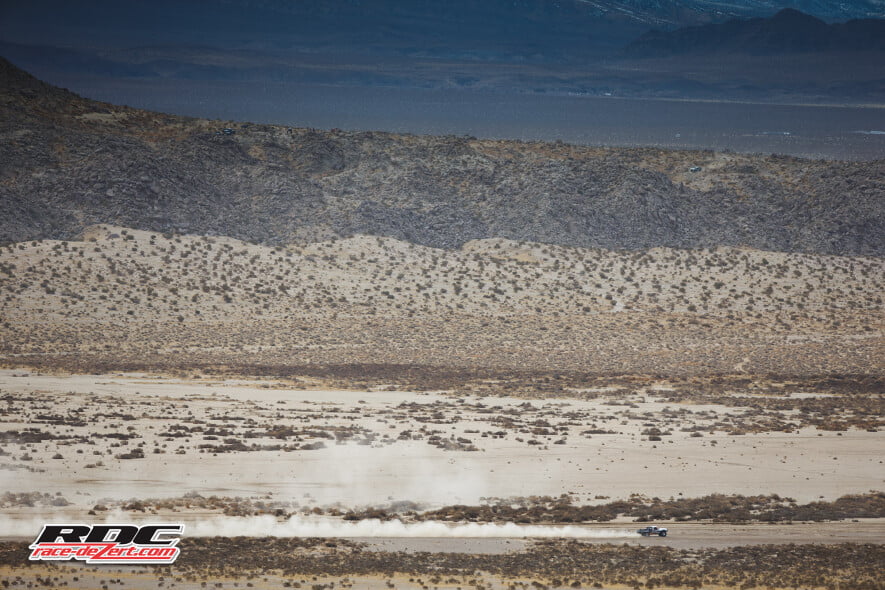 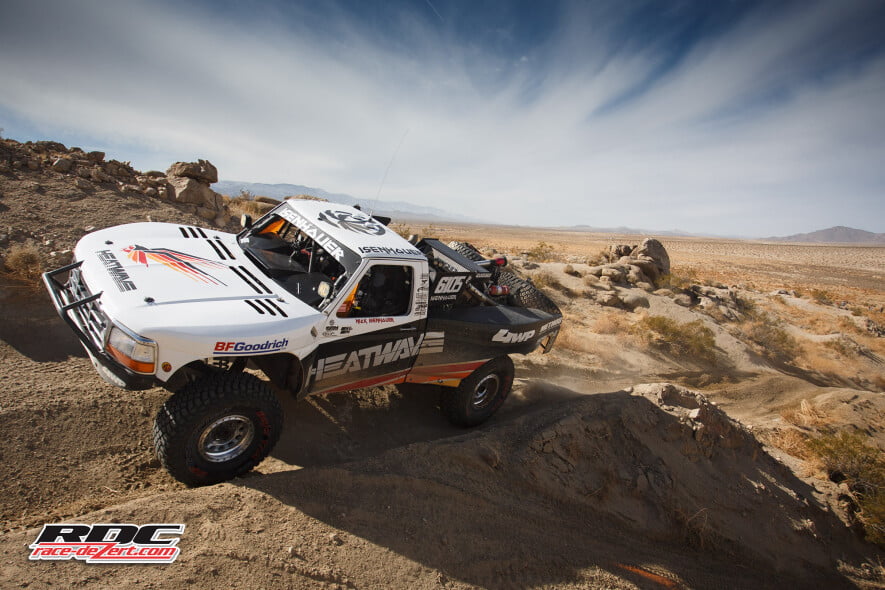 Not only were the B1 Cars and T2 Trucks trying to win their class and take home $10,000, but the faster of the two groups would also take home an additional $50,000 as well as bragging rights. 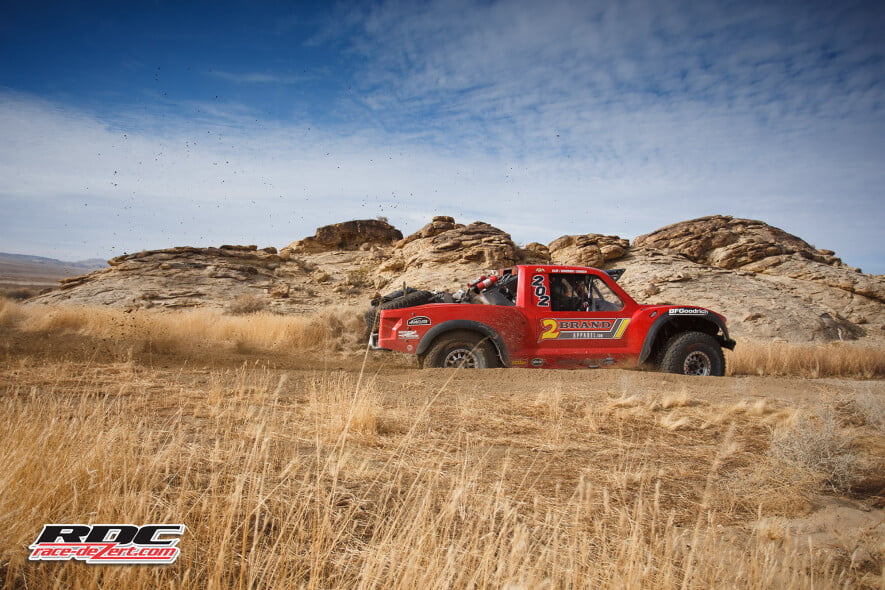 After qualifying first the day before everyone knew that it was Bryce Menzies race to lose, and after the first lap of the long loop it was clear that was the case. Coming into the finish line on his first lap Menzies had already put five minutes on the rest of the field and going out on the shorter loop for lap two continued to push a fast pace. 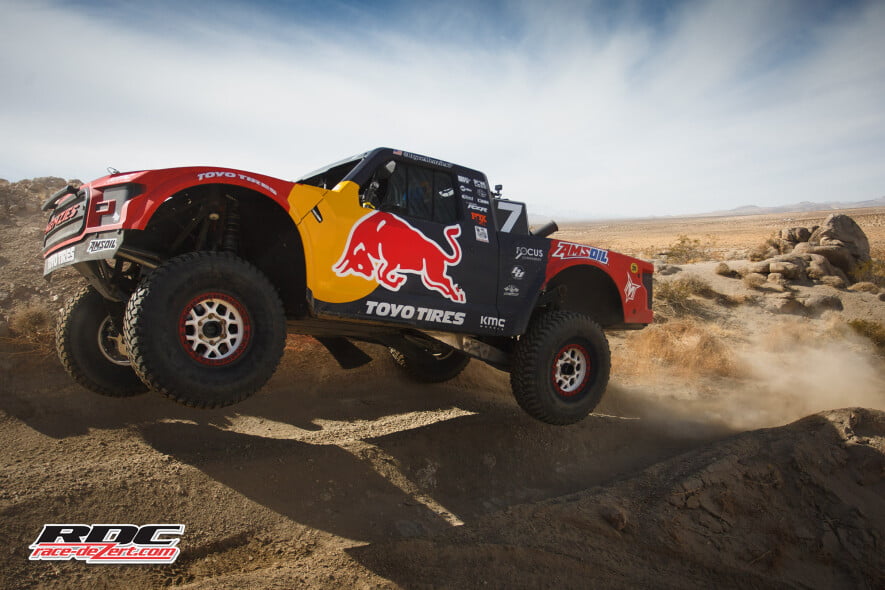 For lap one and most of lap two Menzies would have clear air but coming in on his second lap where the two loops join he would begin to get into lapped traffic giving his competitors behind him the chance to make up some ground before they also hit lapped traffic. 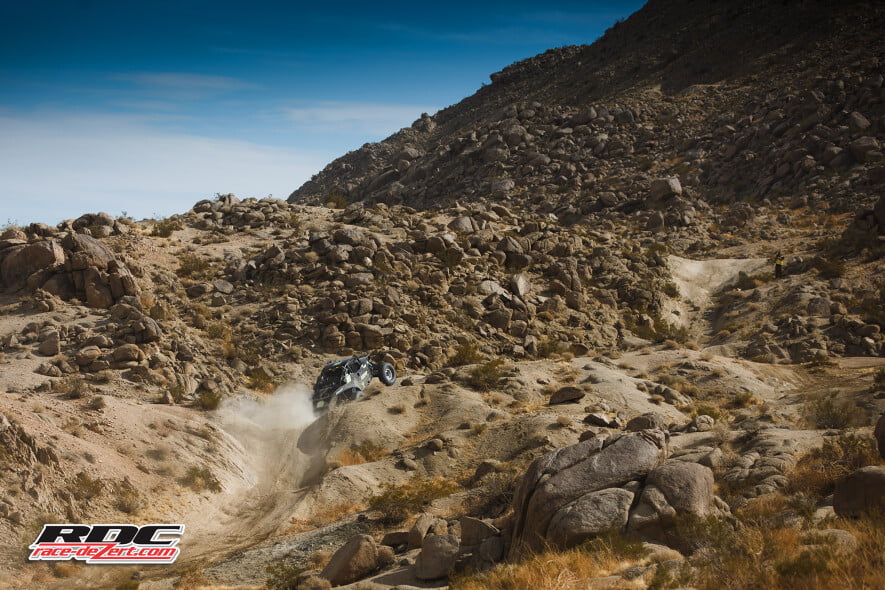 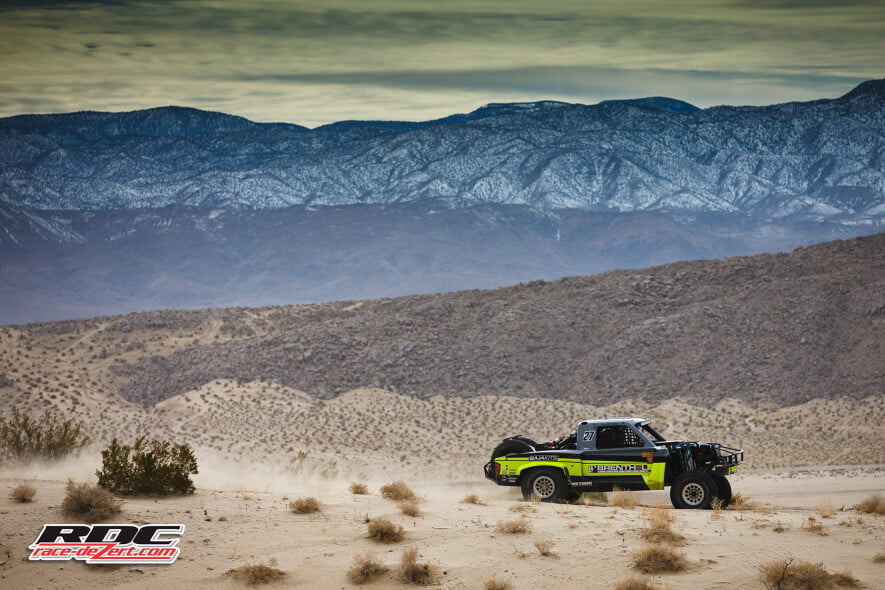 Behind Menzies everyone was starting to fall into their own grooves and the two truck team of Cameron Steele and Bobby Pecoy were battling it out with Kyle Jergensen for second place. Ray Griffith who started second was still in the lead in B1 but had dropped back a few positions overall, and the T2 truck of Pierce Herbst found his way around him with Ryan Millen driving. 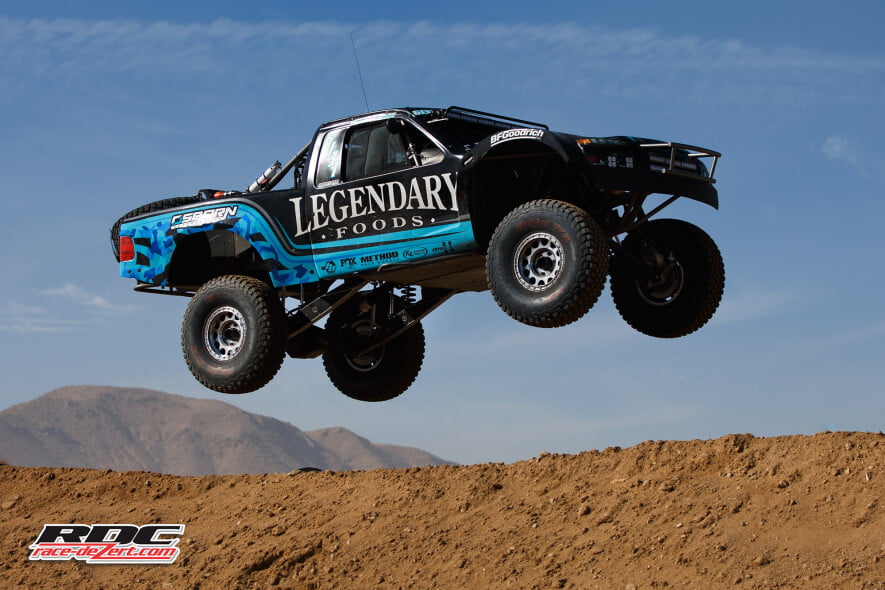 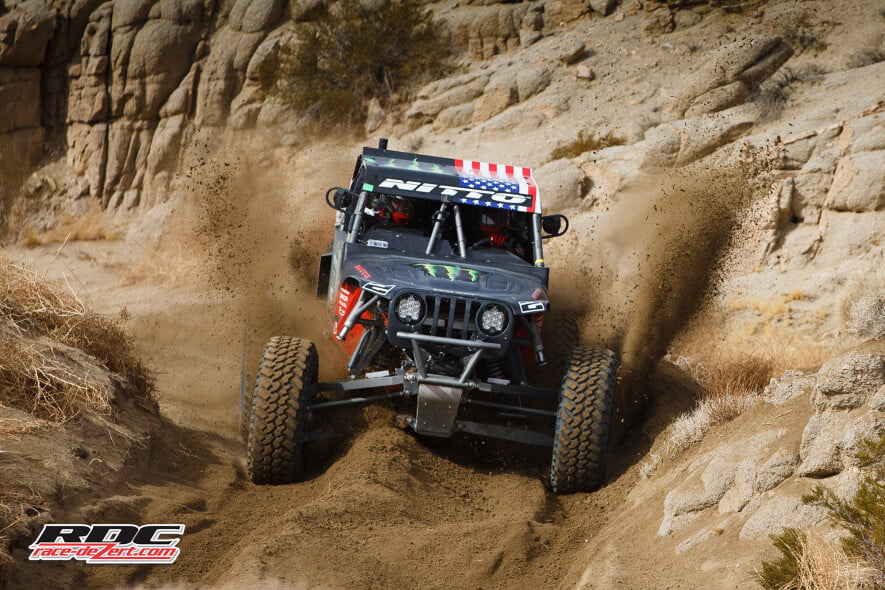 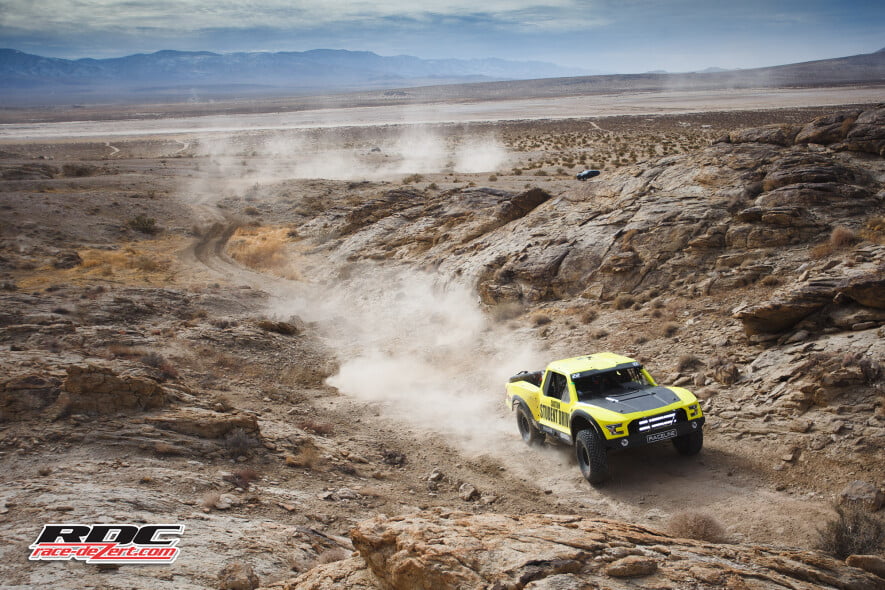 After prerunning the course the word from the racers was patience would win the race. With lots of technical areas on the course and rocks lining the track all over it would be easy to end your race or slow your pace down with flat tires. With each lap we saw more and more drivers dropping out or falling back. 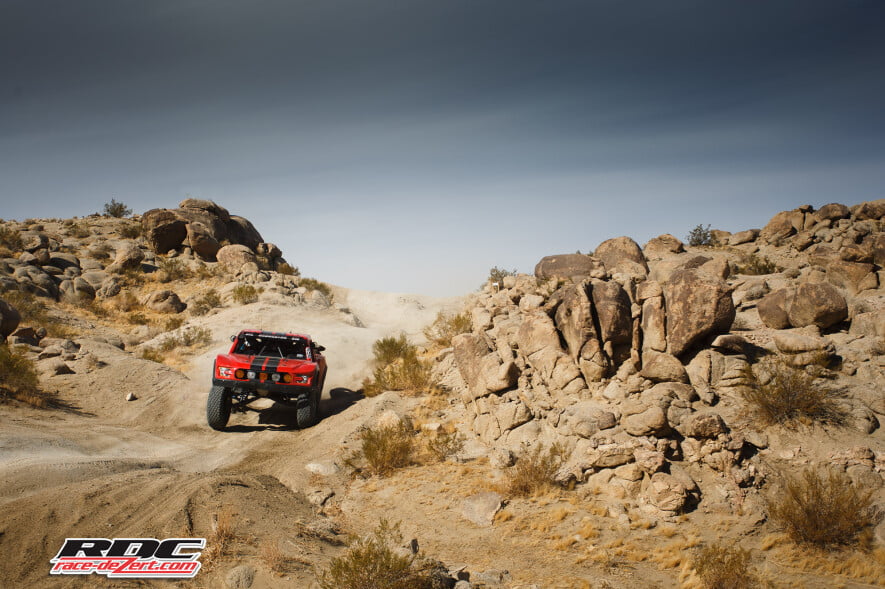 The third lap of the race Menzies held on to his comfortable lead ahead of Jergenesen who was still being chased closely behind by Pecoy and Steele. Not slowing down the Terrible Herbst T2 truck was still on pace keeping up with the higher horsepower T1 trucks. Ray Griffith was still holding the lead in the B1 class with Casey Currie the closest in class but close to 10 minutes behind. 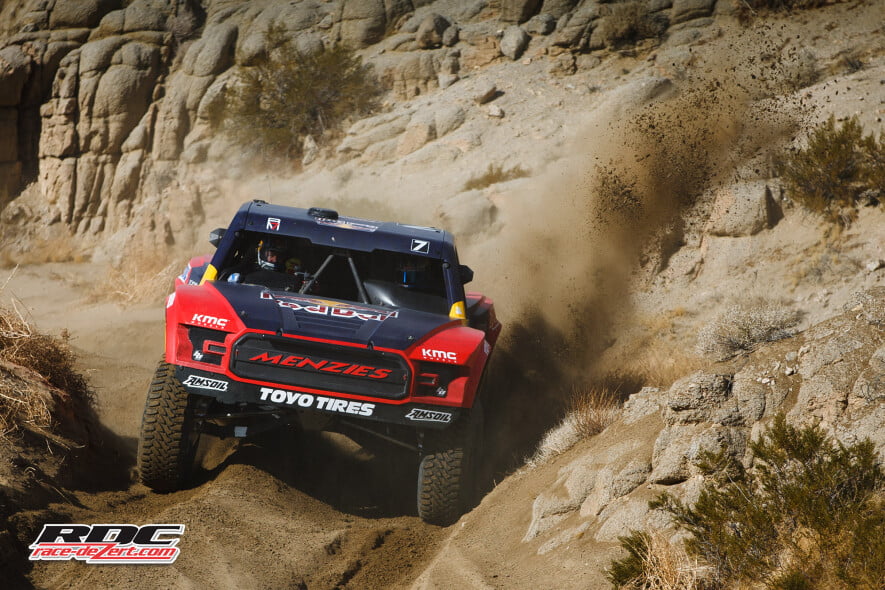 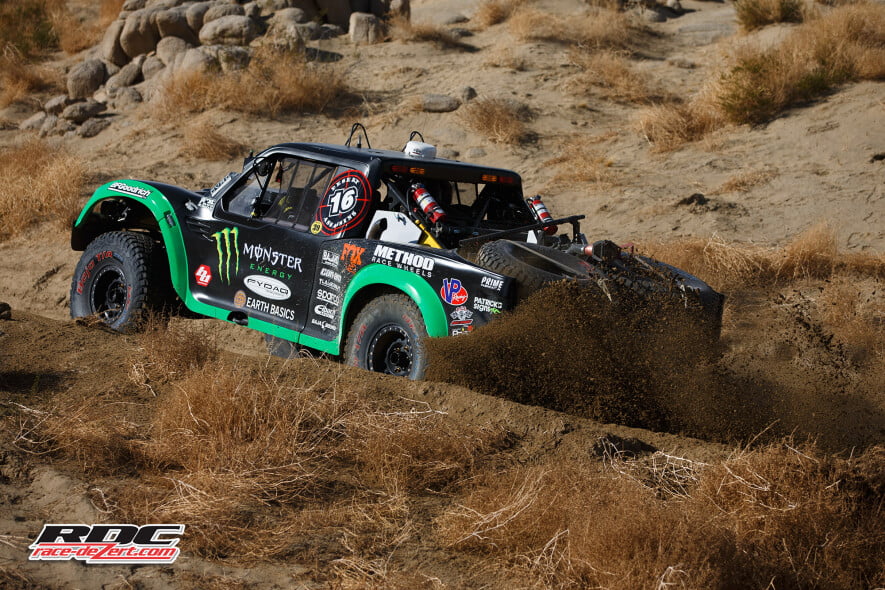 Bryce and co-driver Oren Anderson put their heads down and ran their own race the last two laps knowing that the only thing that could take away the win was themselves. Menzies would cross the finish line with a time of 5 Hours and 38 Minutes giving him the overall win backing up his win from last year. 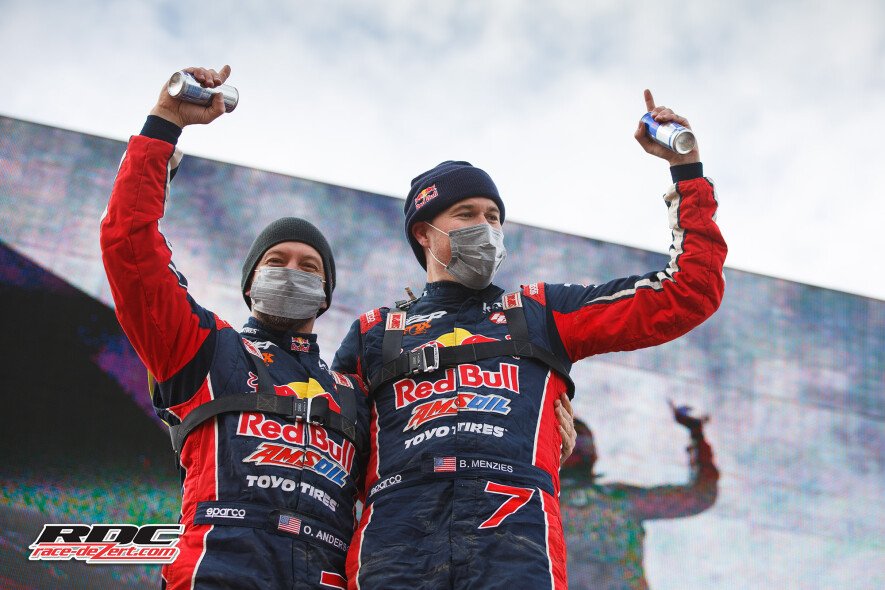 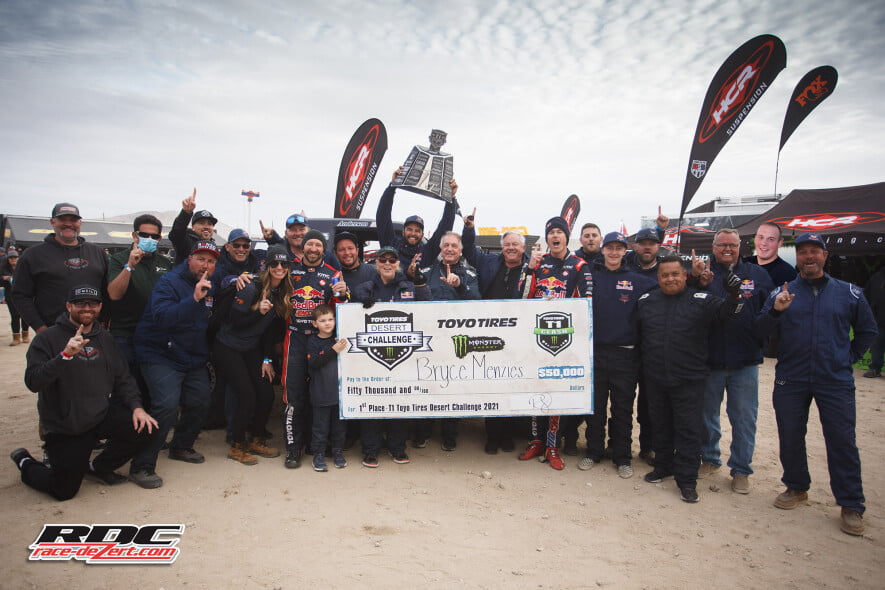 Pecoy would follow out on his last lap which left Jergenesen and Steele left to battle it out for second place. Jergeensen would finish physically ahead of Steele but when times were checked Steele stole second place by a mere 14 seconds. While Steele was being giving split times by his team Jergensen was having communication issues with his team so didn’t know just how close Steele was. 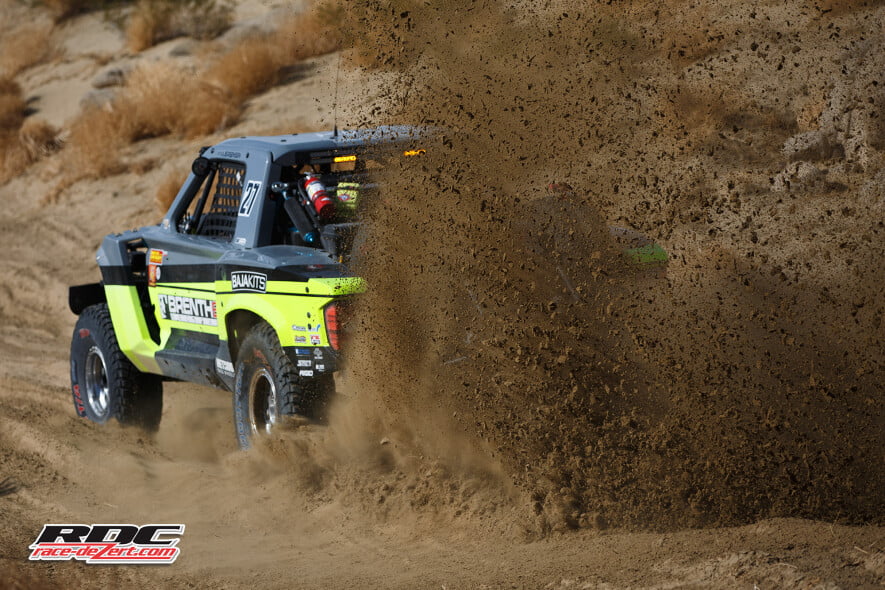 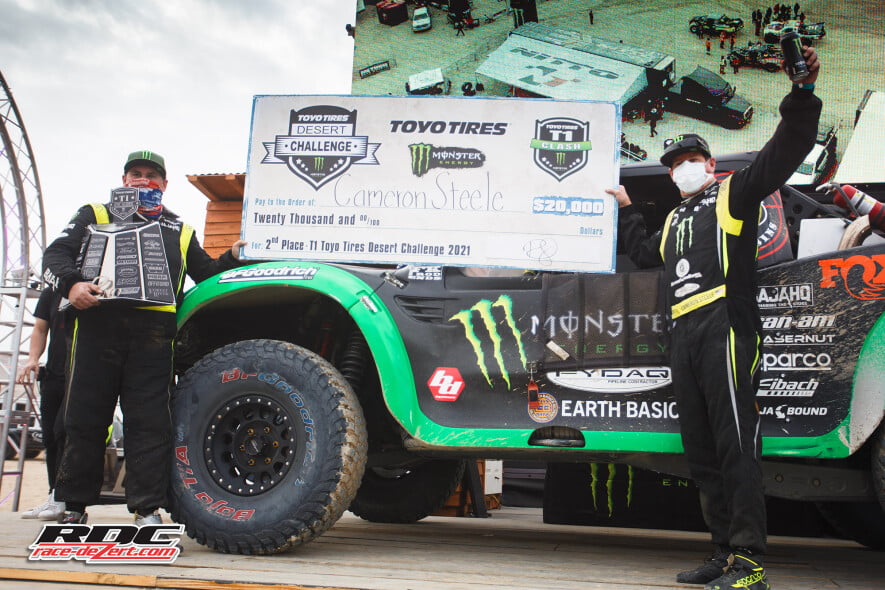 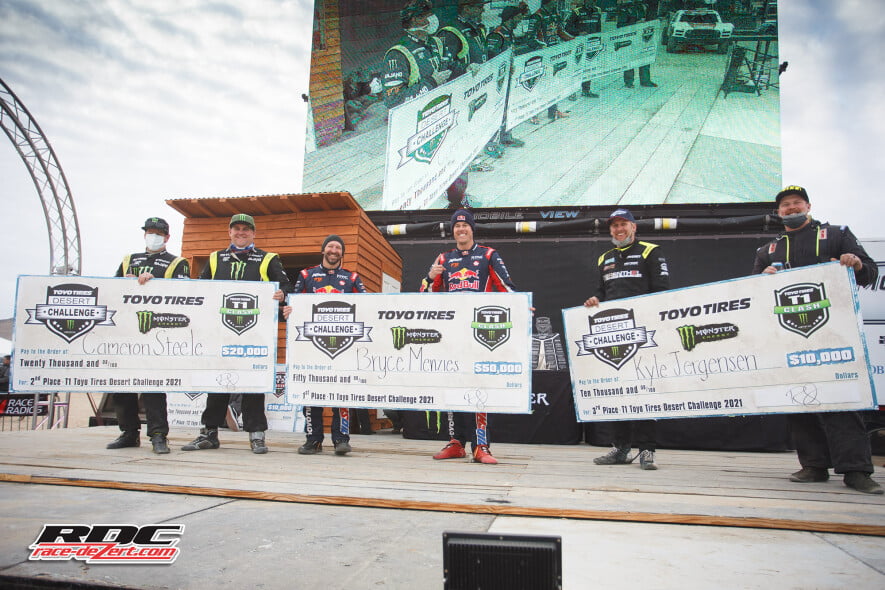 While Menzies was center stage leading the race overall the T2 trucks were the ones putting on a great show as well. Coming in on their third lap, besides Herbst who was checked out, the lead pack of Grabowski, Lovell, Proctor (racing their 7200 truck in the T2 class), Meyers, Bader, Householder and Williams all were in striking distance of each other. 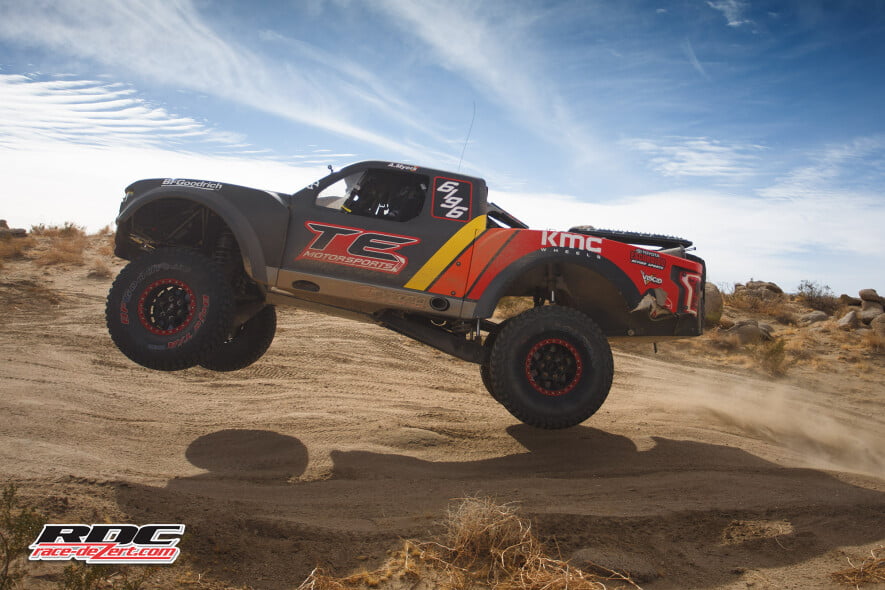 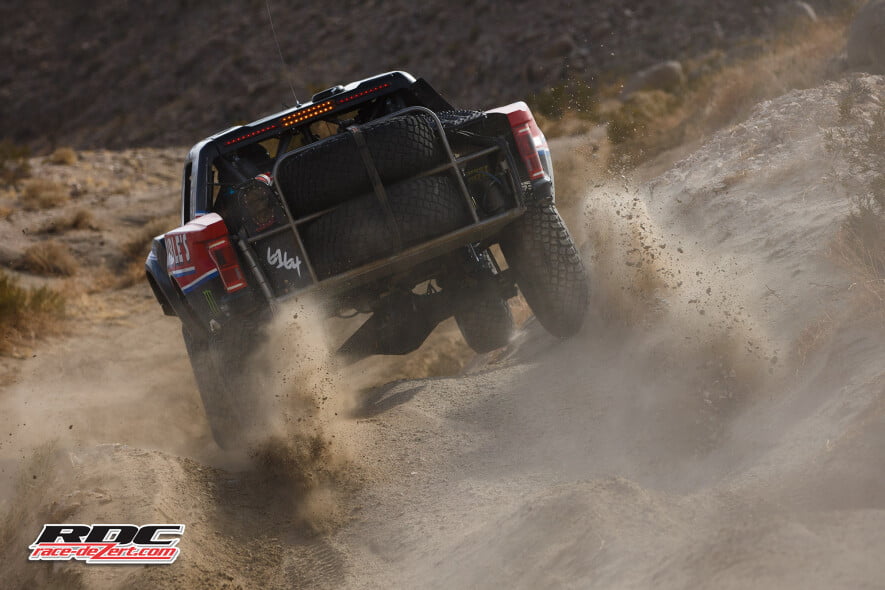 It looked as if Herbst who was battling with the T1 trucks would walk away with the Grudge match win but Grabowski, who started 18th overall, worked his way up to second in class and closed the gap on Herbst. Grabowski would eventually get around Herbst who was stopped in the pits and push hard to the finish winning the grudge match over the rest of the drivers by 11 minutes with a time of 5 Hours and 47 Minutes, which also put him fourth overall for the day. 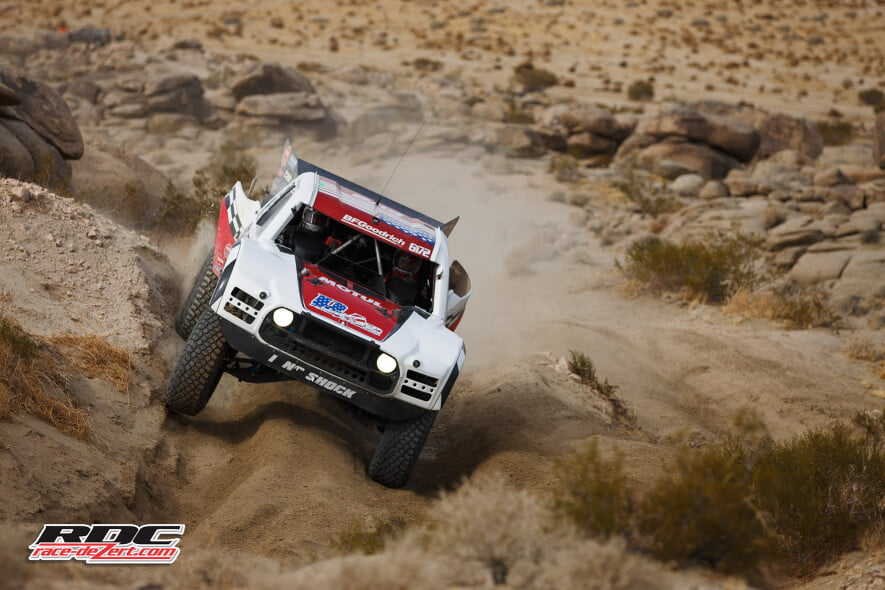 Ray Griffith would still take the win in the B1 class taking home $10,000 for his efforts. While on stage Griffith, who has a T2 truck as well, said he thought the B1 would win the grudge match but the course was much rougher then anticipated and the cars just couldn’t keep pace with the trucks who have more suspension. 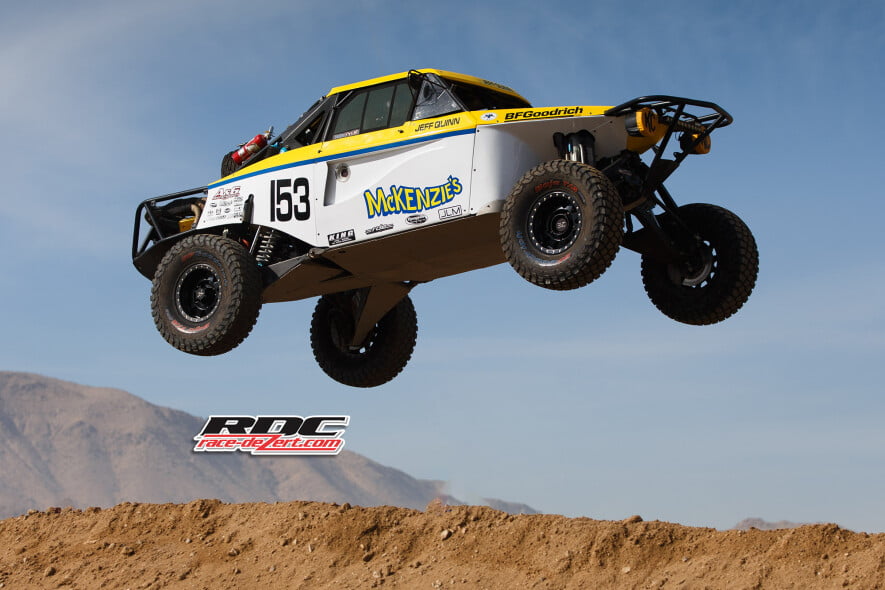 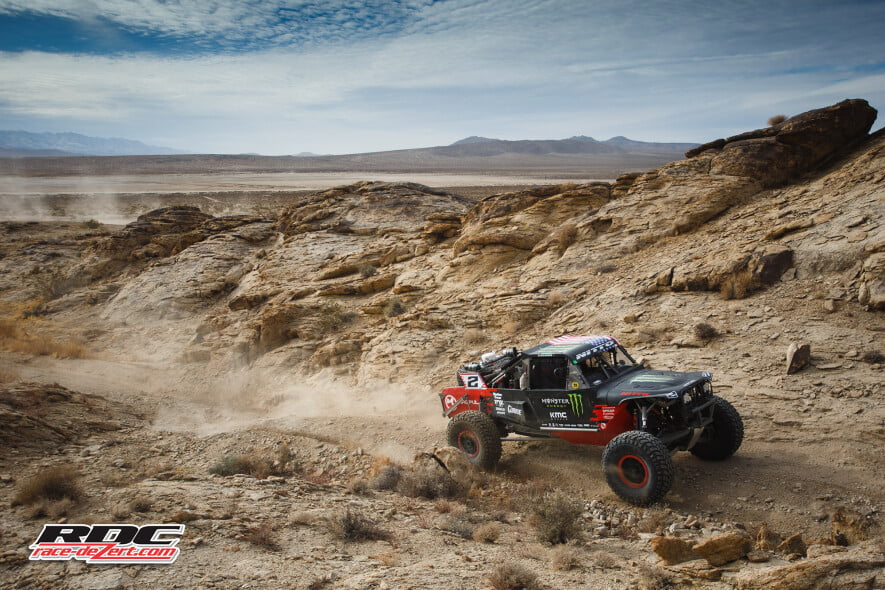 Casey Currie would take second place followed by Adam Lunn rounding out the podium in B1. 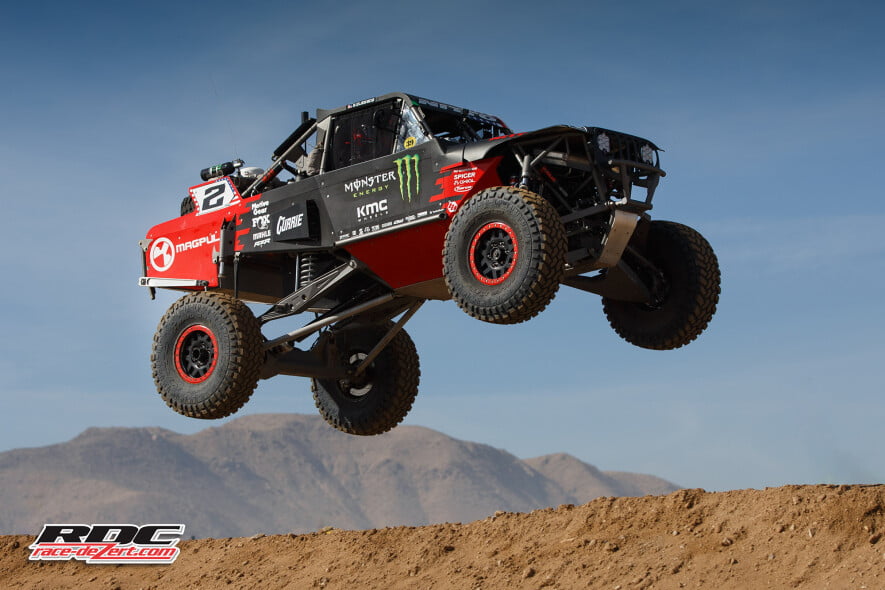 Of the 49 vehicles that took the green flag today only 23 would complete all 5 laps which shows just how brutal of a race course this is. There are still three more races that will be competing on the desert loops and when you throw in all the rock trails as well its going to be a very interesting rest of the week. 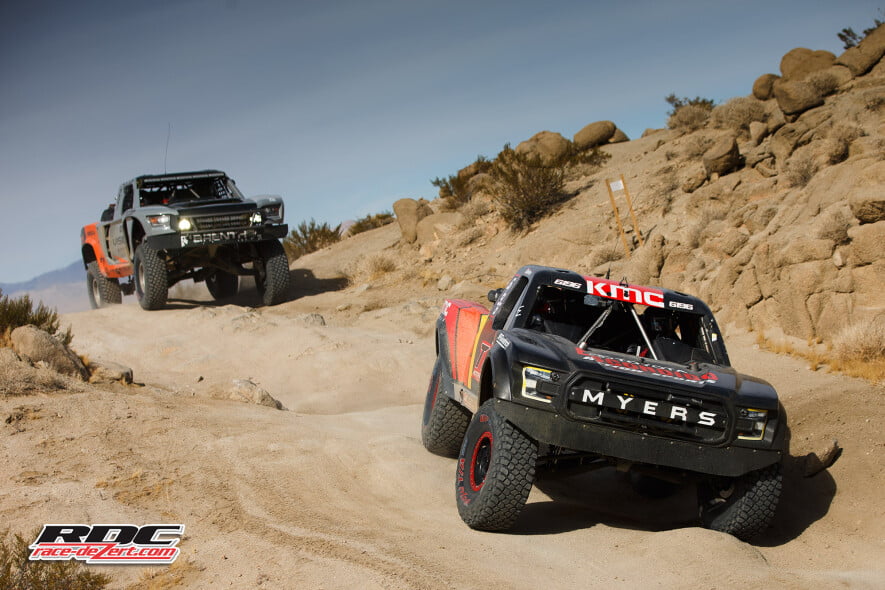 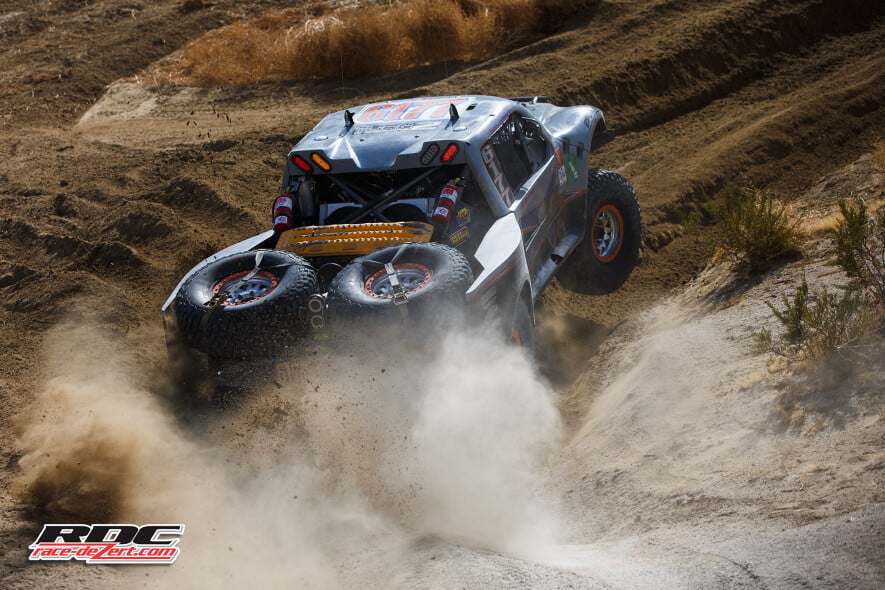 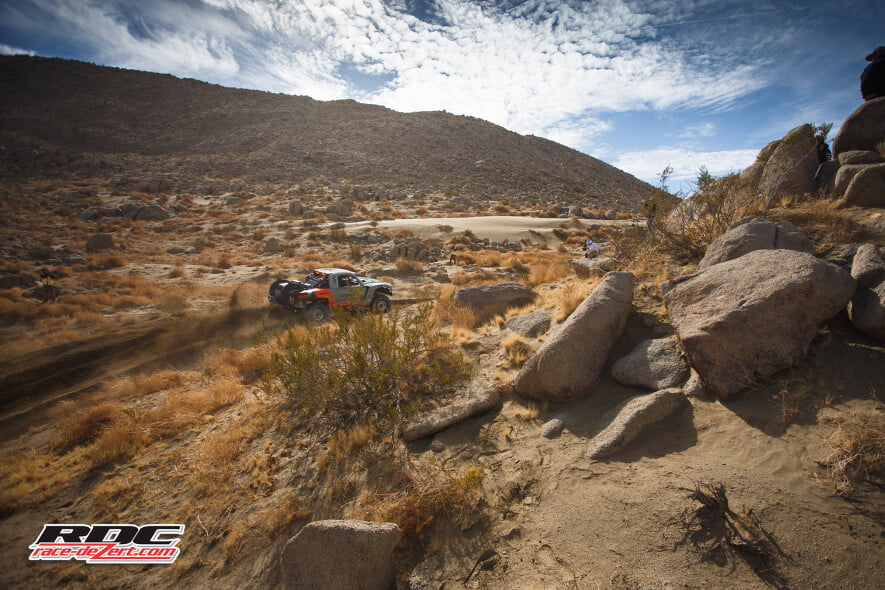 Be sure to follow all the action live each day on Ultra 4 Racings website where they have live timing and a live stream that is the best in the business.

WATCH ALL THE RACES LIVE BY CLICKING HERE!

Congrats Bryce! Man you guys have that truck dialed. You brought a bazooka to a knife fight! Too bad Andy didn’t come to make it more fun for you. The guys behind were pedaling as fast as they could but you and that truck together are a mighty fast combo.
2wd guys be like dang I need to find a million bucks pronto!
Good Grief

The race for 2nd and third was an epic battle all day. PAB said they pinned it and held on for the last 65 miles chasing Kyle. His words: “We destroyed that truck the last 65 miles”
The engine died on the podium. Went to restart and she had zero oil pressure, the 2nd place truck went back to her pits on the strap. She went all in and never quit till it was over. I’m pretty stoked on the 2nd place. Way better start to the KOH week than last year! 1 down 4 to go!
Good Grief
Share:
Facebook Twitter Reddit Pinterest Tumblr WhatsApp Email Share Link