For 2019, Camburg changed the scope of their racing schedule and set out to only race the most prestigious races in the Best in the Desert series in the 6100 Spec Trick Truck class.

The “General Tires Vegas to Reno presented by FOX” is the longest off-road race in the US with over 500 miles of the harshest terrain and conditions in the Nevada desert. The Camburg team had one goal and one mission, to put the Camburg General Tire Scosche Monster Energy #6188 Spec Trick Truck on the podium at the top spot.

Coming into an event like this is weeks and months in the making and involves many different facets. From shock tuning sessions and system functionality tests to coordinating race and pit logistics, it takes all these aspects and more to be successful, let alone win.

The team headed to Las Vegas, NV from Huntington Beach, CA for qualifying on Wednesday and tech/contingency on Thursday. Only the top classes in BITD qualify prior to the race to determine the starting order come race day. By random drawing, Camburg was 4th off the line in qualifying in a massive field of 6100 trucks.

With Kyle Jergensen behind the wheel and his co-driver Shawn Skanks, as soon as the light turned green they were in full kill mode. Kyle drives at 100% intensity start to finish and they rocketed through the short qualifying course with no issues or mistakes. Their qualifying run of 5 mins 26 seconds was the fastest of the day and nearly 2 seconds faster than 2nd place qualifier, which is significant in such a short distance course in a spec. engine class. It was also faster than 80% of the unlimited Trick Truck class racers. Qualifying 1st made the statement that the team was going for the win.

After technical inspection and contingency, the team headed 100 miles northwest to the small town of Beatty, NV where the starting area is to camp for the night. This was made easy by their fleet of chase/pit trucks that are outfitted with Go Fast Campers.

With a final early morning prep/check that Friday, the #6188 Camburg truck was off the start line at around 10:30 am.

The pace Kyle set was on point from the start and he was immediately caught up to the slower Trick Trucks ahead of him. This made for some dusty conditions and smart driving but it didn’t faze them. They knew they had a target on their back and needed to keep making moves and pull ahead which they did. Before pit 4 around race mile 120, they caught up to another slower Trick Truck that wouldn’t move over, even with the Racing Trax system that alerts all racers that a faster vehicle is approaching behind you to pass. The only decision was to nerf the truck ahead to let them know they needed to get by. In doing so it blew the front fiberglass hood and fenders off the truck but was still attached blocking Kyles field of vision as he drove. He wasn’t about to pull over let alone slow down since he got around the slower truck, so he continued to drive with the hood blocking 90% of his view. He was looking through a small ventilation hole in the hood to see where he was going until it finally gave way and broke off completely. There is always something unexpected and exciting in desert racing.

With zero issues in 162 miles, they pulled into their first scheduled pit stop in Tonopah at pit 5 where they received fuel, fresh rear tires and had a quick once over of the truck. They were back underway and putting time on the trucks behind them both physically and on corrected time. Up to this point, they have been leading the race from the very start.

Now mid-day, the outside temps were climbing. Southern Nevada summers are brutal with temps over 110 and this year was one of the hottest. Engine and tranny temps were on the rise due to the lack of aerodynamics of the truck with the missing body panels, so they had to keep an eye on them. They finally leveled out and stabilized thanks to the added protection AMSOIL Synthetic oil in the engine and transmission offers. High outside temps can wreak havoc on trucks and the racers themselves which it did for many others. You can easily see temps inside the cockpit over 120 degrees, then combine that with 2-3 layer race suits and helmets. Drivers and co-drivers endure some of the harshest conditions both mentally and physically.

Putting time on the rest of the class and moving through the slower field of trucks ahead, they pulled into their next scheduled pit stop in Mina at pit 9 which is now 312 miles into the race. Same protocol as the last pit, fuel, rear tires, water, food and then they were back underway. By this point, they had a 15-minute lead on 2nd place so they knew they didn’t have to push it too hard, but still, keep up a race-winning pace.

Leaving Mina, they saw some fluctuations with the alternator output which was concerning at the time but it ended up self-correcting, could have been an issue with silt in the case. Come to find out the internal voltage regulator was having an issue. At the continued pace they were on, they wouldn’t need to use their Rigid Industries LED lights since they would be finishing in daylight, so there wasn’t going to be a higher demand on the electrical system.

Now it was a sprint to the finish through the dust. The next 190 miles is not easy and gets very rocky and tight towards the end. Races are won and lost in the last 20 miles of this race and take many competitors out just with the finish in sight.

With zero flats on their General Tire Grabber X3 tires and only a few minor issues throughout the day, the Camburg General Tire Scosche Monster Energy #6188 truck crossed the finish line 1st, with an overall time of 8 hours 35 minutes with a 58.79 mph average speed. With the commanding pace they set, the 2nd place truck finished 28 minutes behind them on corrected time with a 55.8 mph average speed. Not only did Camburg win their race, but they also finished 8th overall when mixed in with the faster Trick Truck and Unlimited Buggy class finishers. They were the 6th truck overall to cross the finish line this year.

For comparison sake, last year’s Vegas to Reno 6100 winner had a slower 55.29 mph average race speed and finished 18th overall. It just goes to show the pace Camburg set this year on the course and the caliber of racing they put forth.

“This year we decided to focus on a few of the bigger races that draw the most competition. Qualifying 1st and then winning Vegas to Reno start to finish put the spotlight on our team and our KINETIK trucks. Feels good to get the win and show off all the hard work the team and our sponsors put into our racing program.”

“Time spent dialing in the FOX shocks with SDG this spring made a significant improvement to the overall balance and handling of the truck. I’m really happy with where the truck is and where we’re at as a team. It’s always awesome to win at this level of racing and we just did that in the longest and hardest race of the series.”

Now with the race over, Camburg is already tearing the truck down and getting it ready for the next event. Preliminary everything still looks good and could go another 200 miles. The FK Rod End bearings are tight as can be, the K&N filter will get a quick wash and the Magnaflow mufflers a quick polish. Then the truck will be on display at the upcoming Offroad Expo in Pomona, CA on September 28-29.

Their next race will be the Best in the Desert Method Race Wheels Laughlin Desert Classic October 10-13 which is a 2-day race format so it makes for some very exciting racing. Then it’s off to the SEMA Tradeshow November 5-8.

Camburg would like to thank all their sponsors, team members and fellow racers for the opportunity to be racing in this class and series. Best in the Desert put on the highest quality and well-organized events out there today. 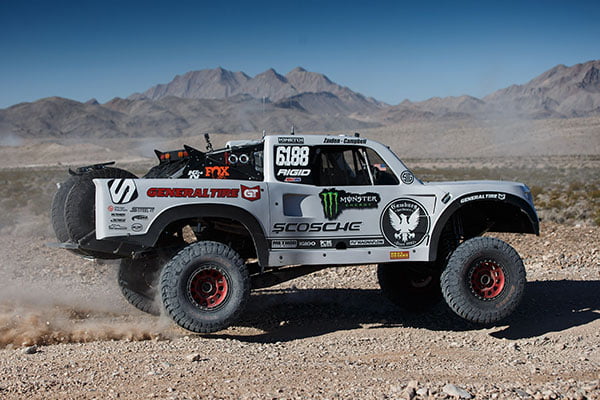 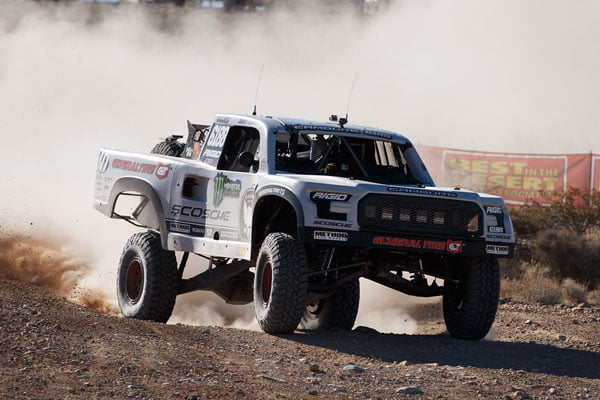 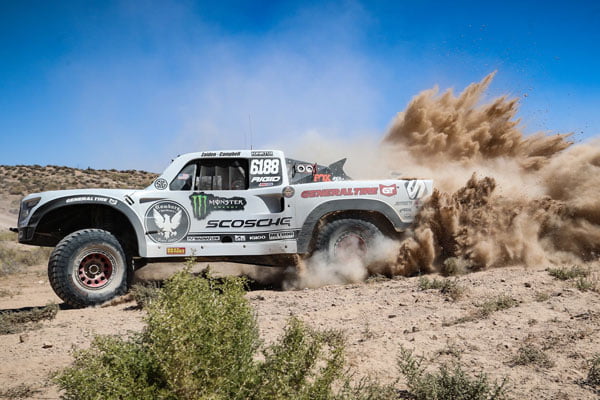 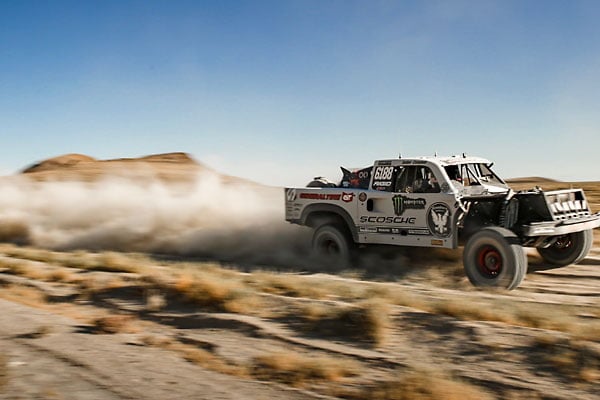 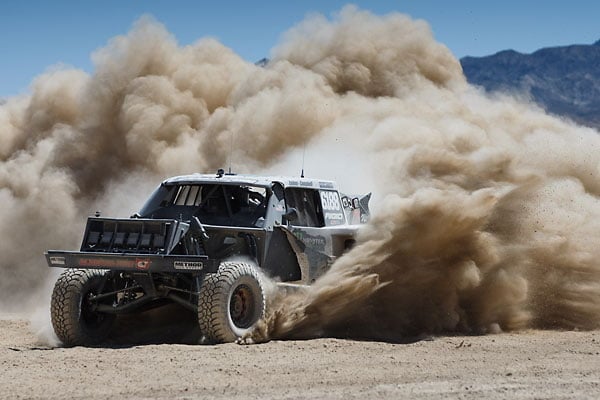 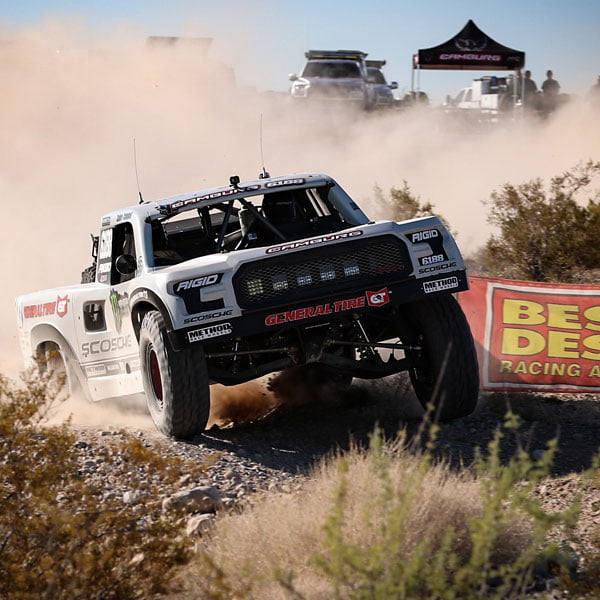