Camburg Racing Wins Back to Back

Coming off their win at the Best in the Desert Vegas to Reno race, Camburg set their sights on finishing off the 2019 racing season with another win and to set the tone for next year. 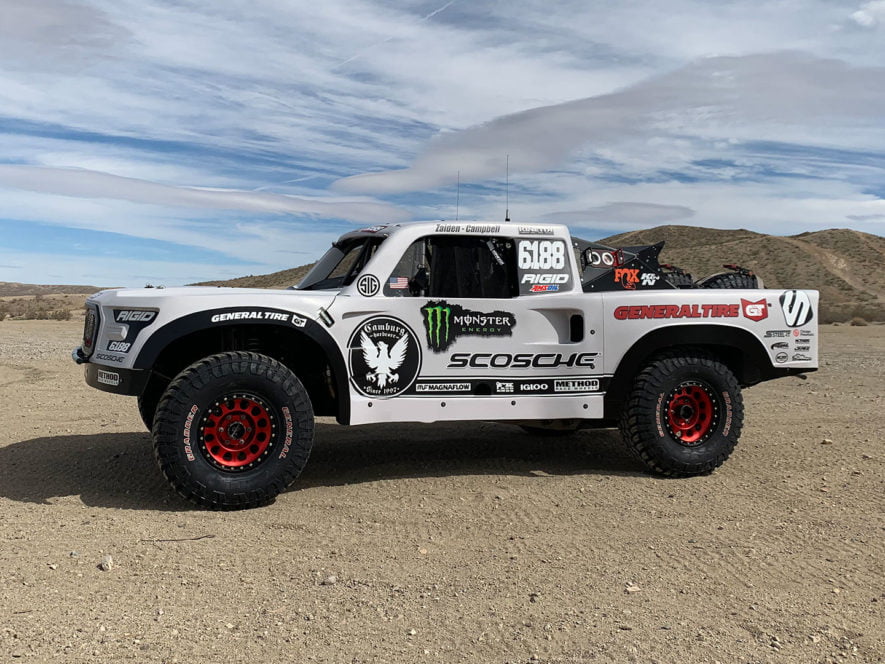 The “Method Race Wheels Laughlin Desert Classic” is a fun and unique 2-day race format that mixes short course and desert racing elements on a 16-mile course in Laughlin, Nevada. With each race consisting of 4 laps, there’s zero margin of error to finish on the podium. Your overall standings for the weekend are based on your combined times for both days of racing. The Camburg General Tire Scosche Monster Energy #6188 Spec Trick Truck was up for the challenge.

The team headed to Laughlin, NV from Huntington Beach, CA for qualifying on Thursday and tech/ contingency on Friday. Only the top classes in BITD qualify prior to the race to determine the starting order come race day. By random drawing, Camburg was 24th off the line in qualifying in a massive field of 6100 trucks. 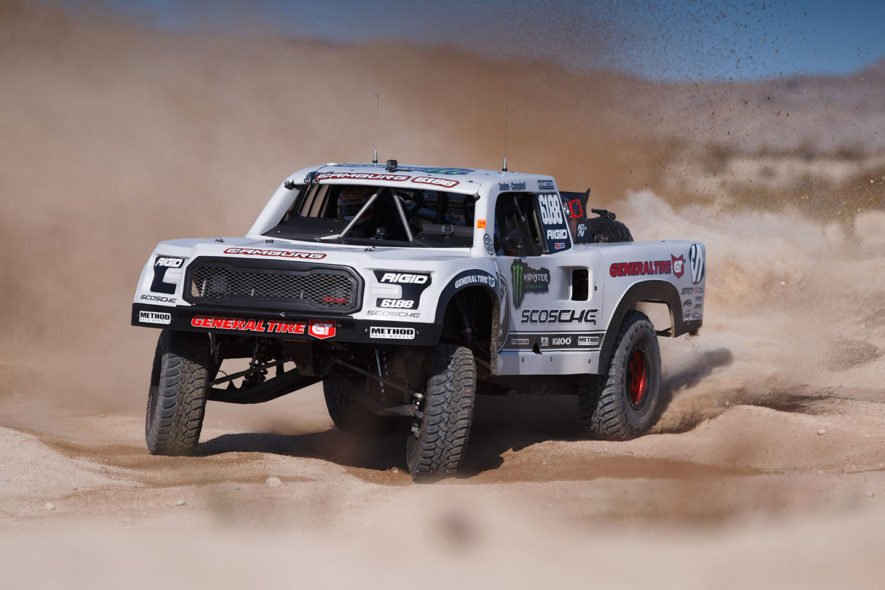 With Kyle Jergensen behind the wheel with his co-driver Shawn Shanks, as soon as the light turned green they were full throttle start to finish. The truck was on rails through the corners and they put down a run to be proud of. Qualifying 2nd, their lap of 5 mins 20 seconds was just shy of qualifying 1st by less than 4 seconds. This meant that fellow Method Race Wheels teammate #6183 Brock Heger would be first off the line with nothing but clean air ahead of him and a target on his back.

Saturdays starting order was based on Fridays qualifying results. With a side by side drag race start, the Camburg 6100 was staged 2nd since the fastest qualifier gets to start solo. Each group is also staged 30 seconds apart. Camburg got the green flag and the race was on! Kyle hit all his marks, the General Tire X3’s were hooking up and he put the Camburg truck ahead leaving the infield and out into the desert. Since #6183 started 30 seconds ahead of them, they needed to close the gap in order to win. Lap after lap Kyle got closer and closer and was leading the race on time even though he was physically 2nd on course. When it was all said and done the truck ran flawless and Camburg crossed the finish line in 1 hour 3 minutes and 56 seconds and was the winner of day one by 15.5 seconds. 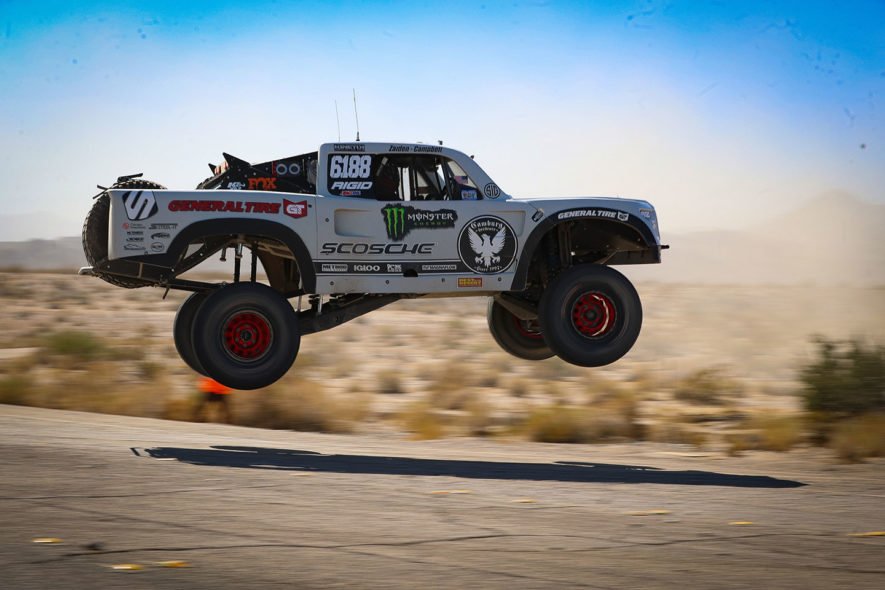 Sunday’s game plan was one and the same, to drive hard and make no mistakes. By winning Saturday, Camburg was lined up side by side with 2nd place finisher #6183 and they would be the first group off. When the light turned green, both were hard off the line and Kyle was able to pull ahead and get out of the infield first. Both drivers wanted the overall win and the pressure was on Brock to make up for lost time. About 8 miles into lap 1 the #6183 got around Kyle and started to pull away a little. Kyle knew he couldn’t let him stretch too far out of his sights so he ran a pace fast enough to stay out of his dust. He knew the time split needed to win so he paced himself and waited to see how each lap progressed.

Finishing the 3rd lap it was time to turn it up. Kyle pushed the Camburg 6100 the hardest he ever had and it took everything he could throw at it, as #6183 was doing the same to stay out front. You could see in the infield Kyle was going for the win and he was hanging it out. On the last lap he was able to reel in Brock and it was one of the closest battles all weekend. The Camburg 6100 finished day two in 1 hour 4 minutes and 45 seconds in 2nd place only 7 seconds behind the leader. With the combined 2-day results, the Camburg General Tire Scosche Monster Energy #6188 Spec Trick Truck was the overall winner of the “Method Race Wheels Laughlin Desert Classic”. 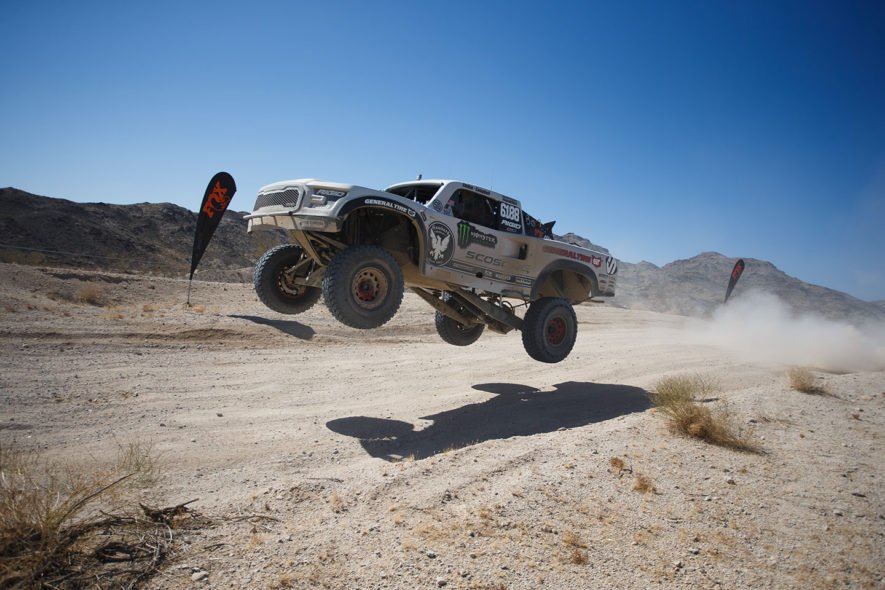 Ending the season with two wins in a row for the Camburg team was a great accomplishment as they didn’t race the full season and weren’t going for a class championship. This year’s schedule was all about racing select events and going for the win in each.

“To end the year with a win is awesome! Kyle drove the wheels off our 6100 truck all weekend and had no issues. Looking at the engine management data we can tell our torque converter was too tight for this race so the truck will be even faster here next year with that change. On a race course like this it’s awesome to see the top 6100’s running so close to the top Trick Truck times, goes to show you how competitive they are and how fast they are becoming.” – Jerry Zaiden

“After Vegas to Reno we spent a little more time dialing in the FOX shocks with SDG and the results speak for themselves. Laughlin is a rough course with some big jumps and big holes and the truck took it no problem. Kyle and Shawn pushed the truck the hardest they ever had and it never skipped a beat.” – Jason Campbell

“After us winning day one I knew Brock was gonna push it as hard as he could on Sunday and I did the same. Finishing off the year with a win is great and I’m looking forward to next year. It’s been great being a part of the Camburg team these last two races and the truck is working awesome.” – Kyle Jergensen

Now with the race over, Camburg is already tearing the truck down and getting it ready for the upcoming SEMA Tradeshow November 5-8. 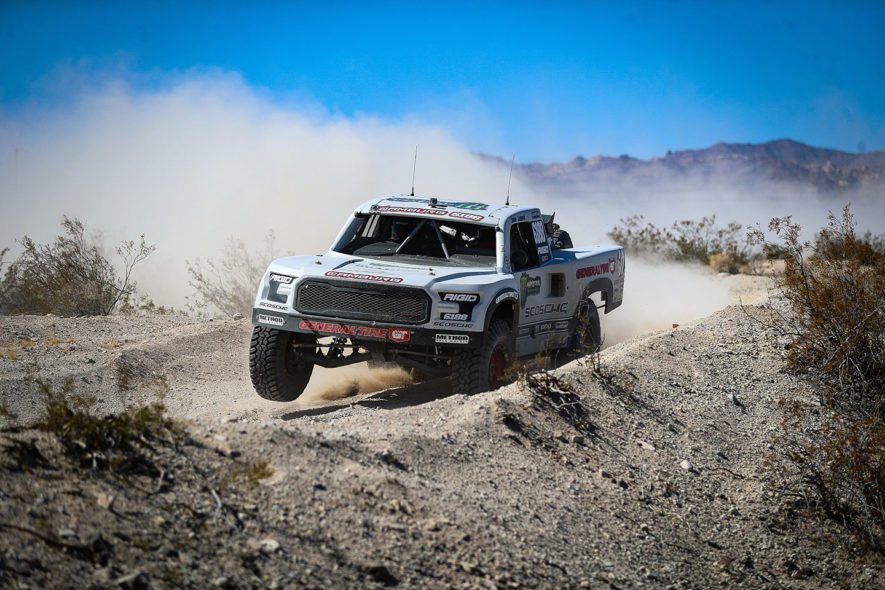 Camburg would like to thank all their sponsors, team members and fellow racers for the opportunity to be racing in this class and series. Best in the Desert puts on the highest quality and most well organized events out there today. The Spec Trick Truck 6100 class has some of the most exciting off-road racing out of all the classes 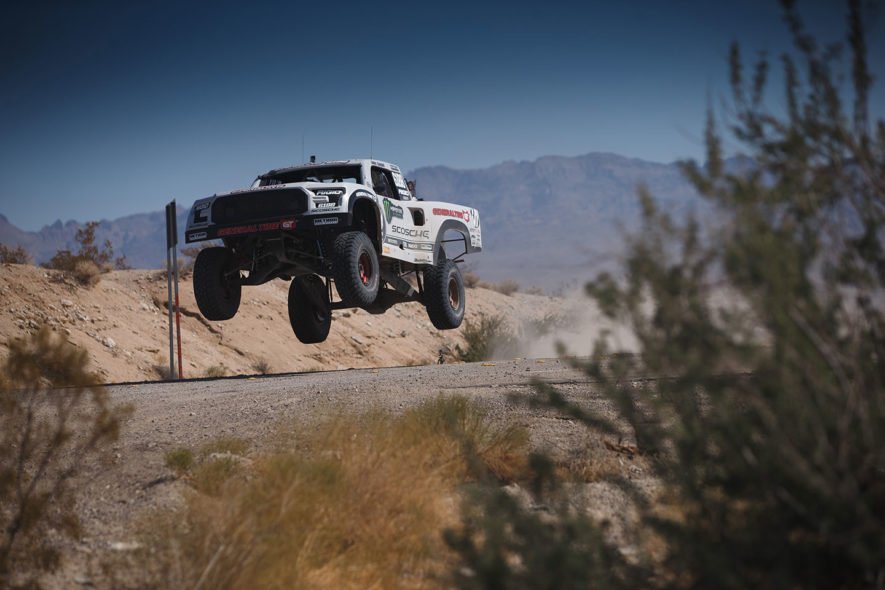