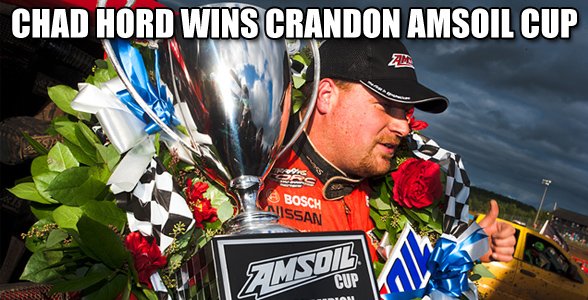 Today’s Pro4 race was almost a carbon copy of Saturday and Friday’s races with the addition of rain half-way through the race.  Adrian Cenni killed it again and by lap 2 he was unstoppable; running so far in front of the pack that you would think he is in another faster class.  He wound up winning the race without a challenge.

The two rivals, Ricky Johnson and Johnny Greaves both ran into engine problems, Johnson’s transmission began to smoke early in the race, while Greaves got tangled up and was forced to limp around the track collecting points for the TORC championship.

Half-way through the race the rain kicked in, turning the track into a slippery slope.  Speeds went noticeably down as everyone tried not to slide off track while defending their position.

At the end it was Mark Jenkins in 2nd place followed by Steve Barlow.

The Pro2 race was a straight up mess.  Heavy rain delayed the start by over one hour over the scheduled time while track officials tried to push the heavy mud away.  Eventually they went green and Scott Taylor held the lead throughout most of the race until he spun-out and lost his podium position. Due to the mud and rain, speeds were a lot lower than what we’re used to for this class, plus they were covered in mud, making it impossible to identify the trucks. When it was all said and done, Bryce Menzies repeated his previous day’s win followed by Mike Oberg and Rob MacCachren.

Brian Deegan continued where he left off on Saturday.  Up front.  First RJ Anderson had the hole-shot out of turn one, but couldn’t hold on and wound up with a 4th place finish.  CJ Greaves ran in the front of the pack but after he went too wide in the gravel pit turn he fell from 3rd towards the back.  Andrew Caddell was fast but only fast enough for 2nd place.  Brad Lovell finished again on the podium with a solid 3rd place.  In his only second year of racing short course, the rock crawler by heart made it to the podium all three days.  Deegan took the win in his new V8 making his return to Crandon triumphant.

The weekend’s highlight was the Amsoil Cup where the Pro2’s had a 20-second head-start over the Pro4’s for no less than $27,500 in prize money, the traveling trophy, and bragging rights to be the baddest driver of them all.

All bets where set on Adrian Cenni to conclude the weekend with 4 of 4 wins, but after lap 2 his early lead within the Pro4 pack changed when his front wheel drive failed and more things broke after a gnarly landing.

Since the Pro2’s started ahead for a Pro4’s to win they had to get around the Pro2’s entered. Chad Hord in his Pro2 gave them hell and no one came even close to passing him for a solid win in the Amsoil Cup.  It was only the third time in history that a Pro2 has won the cup.

Kyle LeDuc ran up front for a long time but after some fuel pickup issues he fell back all the way to the back but managed to finish 4th.

Scott Douglas and Johnny Greaves ran at a steady pace the entire time without any major position changes. Good enough for 2nd and 3rd place.

In closing, this was a very exciting Crandon weekend but it’s unfortunate that politics between the two race series prevents a full house of racing. The race fan loses when all of the top competitors are not on hand to race.