The 2015 Lucas Oil Offroad Racing Series started off in Lake Elsinore and this weekend concludes in the same place after a great season of short course racing. All the hard work by the teams and drivers came down to Round 17 where champions were to be decided and dreams taken away. 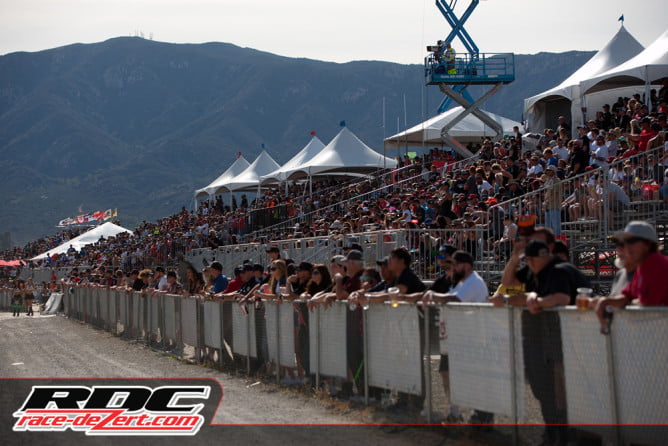 The closed race of the year was for the Mod Kart championship with Travis Pecoy and Christopher Polvoorde only separated by a mere 3 points. For Pecoy to take home the crown he would need to either beat Polvoorde or finish one spot behind him. After qualifying earlier in the day, Pecoy would have no easy task having to start in the fifth row while Polvoorde started up front. 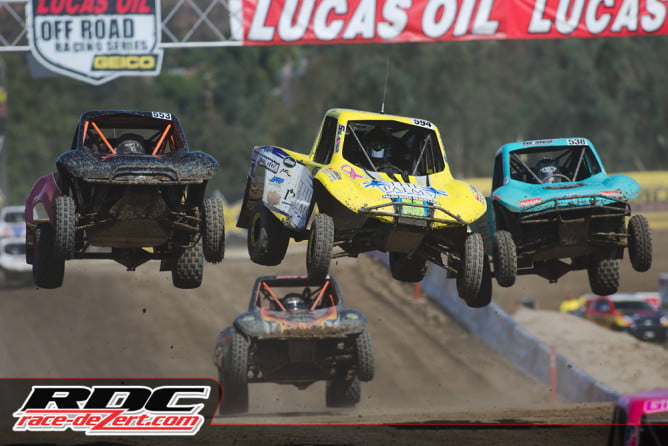 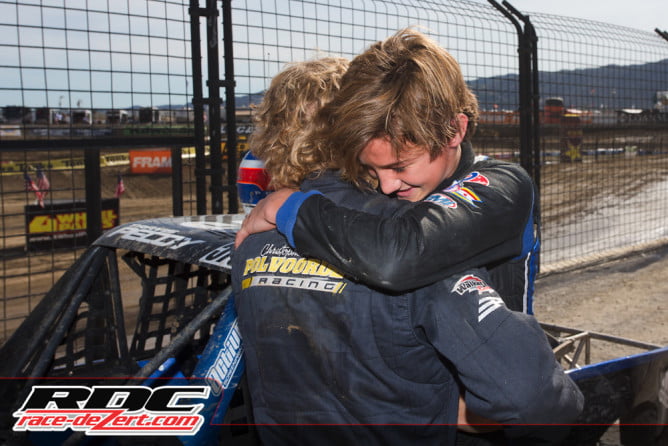 Lap by lap Pecoy moved his way closer to Polvoorde and by the second to the last lap found his way one spot behind Kart #594, and when they crossed the finish line Pecoy showed his excitement with a good ol’ fist pump in the air. Hailie Deegan would take the win for the race but it was Pecoy would had the big celebration as the 2015 Mod Kart Champion. 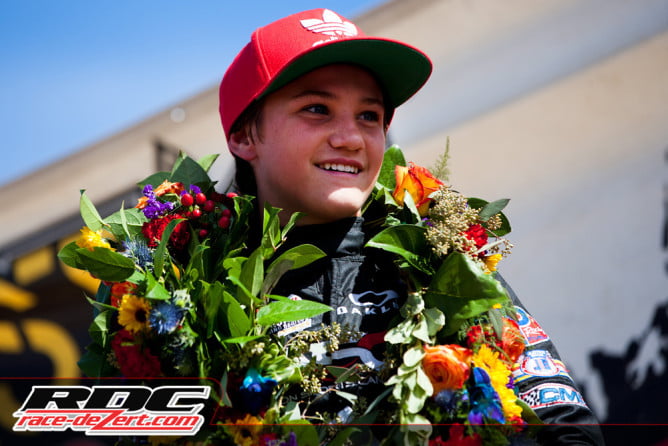 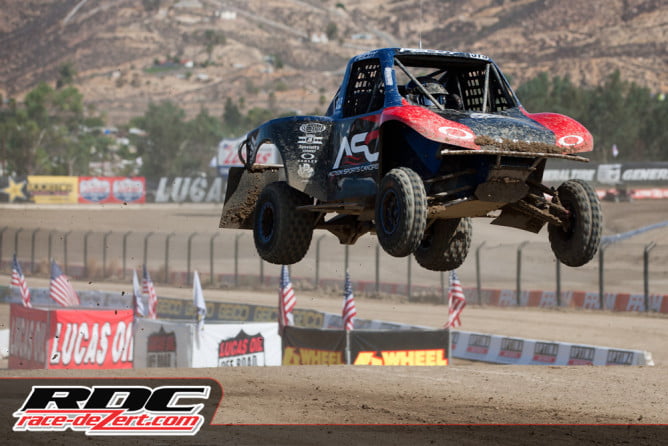 The only championship that was already decided before the weekend was in Pro 4 which was no surprise with the year that Kyle Leduc had. After qualifying 1-2 Leduc and Bryce Menzies (debuting his new Huseman built Pro 4) started up front and it was Menzies who would take the hole shot and grab the lead on lap one. A small mistake would let the field go by giving Leduc the lead and putting Bryce all the way in the back for him to work his way back up. 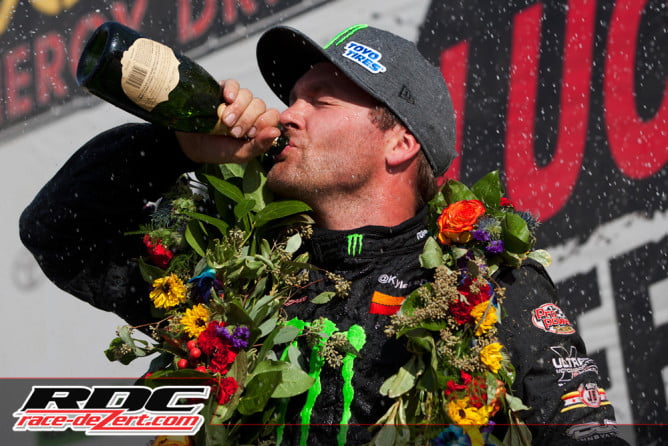 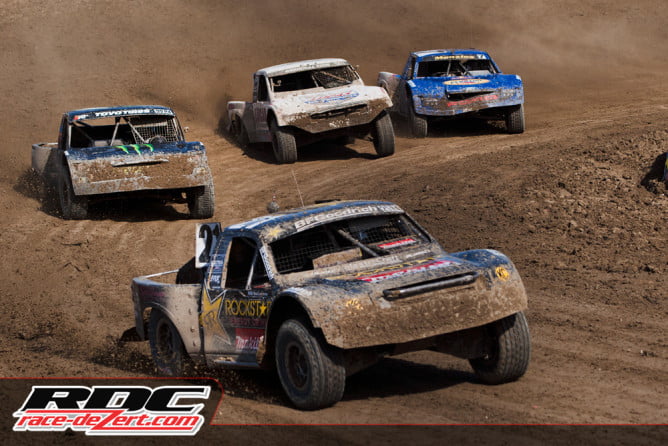 On lap three Leduc would have his own quick mishap which gave Rob MacCachren the lead and that is where he would stay for the rest of the race. It turned out that the small mishap for Leduc was a broken shifter which left the truck in forth gear the rest of the race but he was able to hold on and finish second to finish out his season as the champion. Menzies dug deep and by the twelve lap worked his way to third and would round out the podium there. 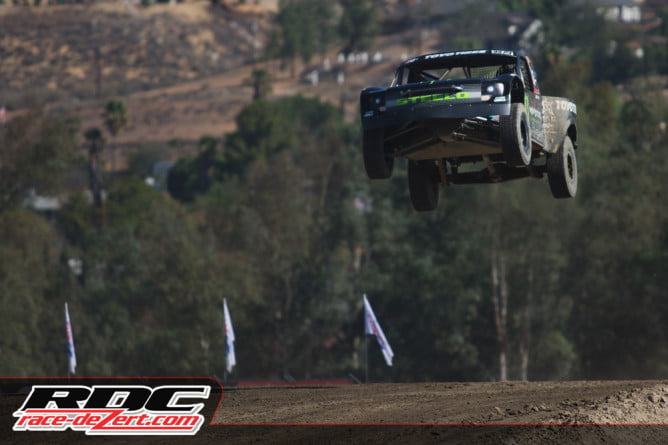 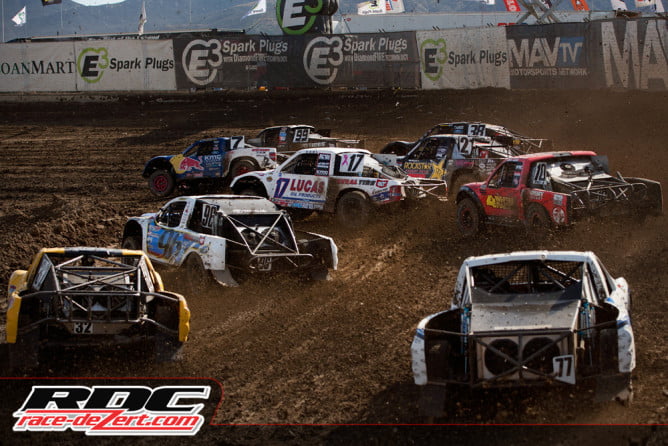 Prolite was another class with a tight championship race between friends Jerett Brooks and RJ Anderson. RJ had enough of a points lead to give him some wiggle room but if he didn’t finish the race or Brooks finished much farther ahead of him he would run the risk of losing the championship. The top five positions during the race remained the same from green to checkered with Brad DeBerti taking the win and Brandon Arthur and Brock Heger following behind. Brooks remained in the fifth position the whole time but RJ who started 8th was able to finish one more spot closer, and in doing so secured the championship. 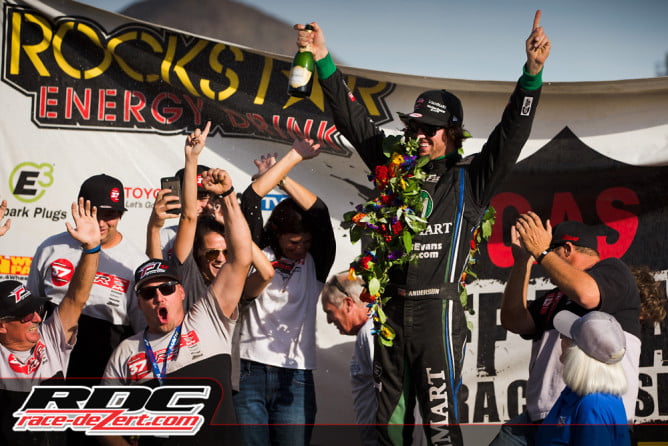 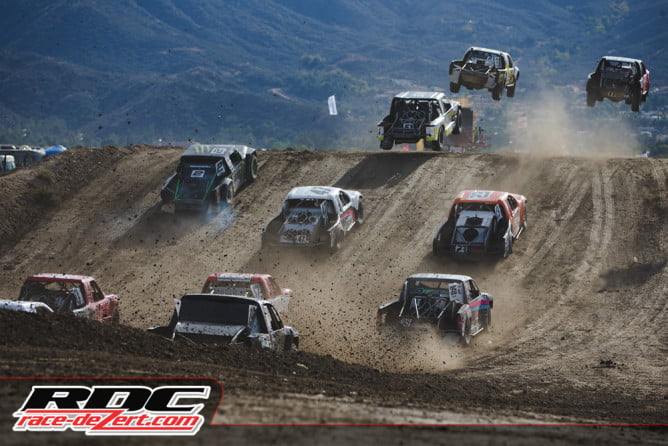 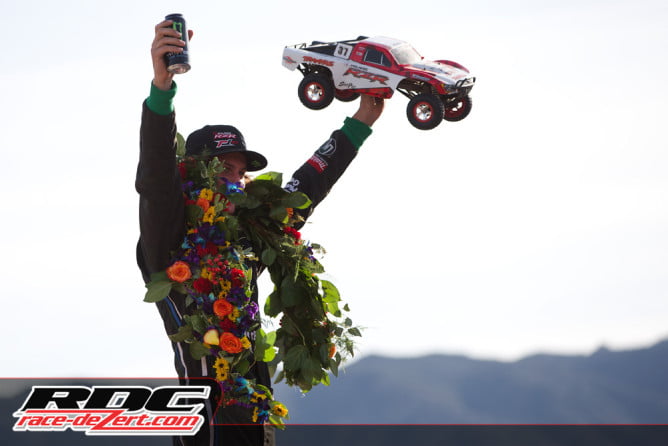 If there is one name you think of in Pro Buggy the last two years it would definitely be George. Last year Chad George was crowned your champion and this year it was cousin Garrett who would stand on top of the podium sipping champagne. All Garrett had to do was start and finish the race to win the championship and on the fifth lap that almost didn’t come to fruition when his car stalled. Luckily he was able to get it going again, and with Chad dropping out with a fuel pressure issue it was Garretts time to shine. 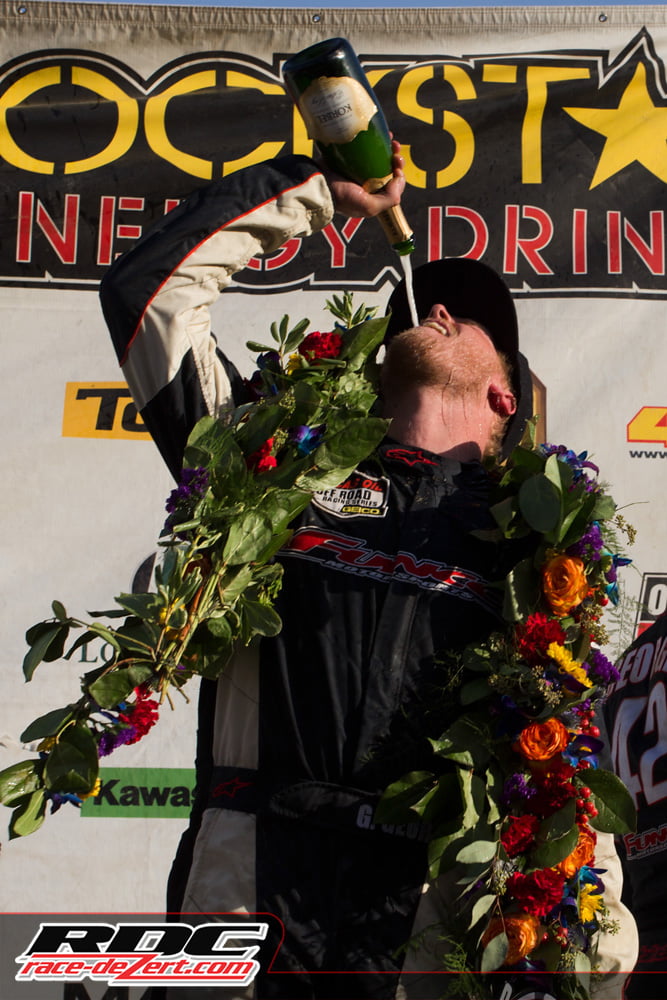 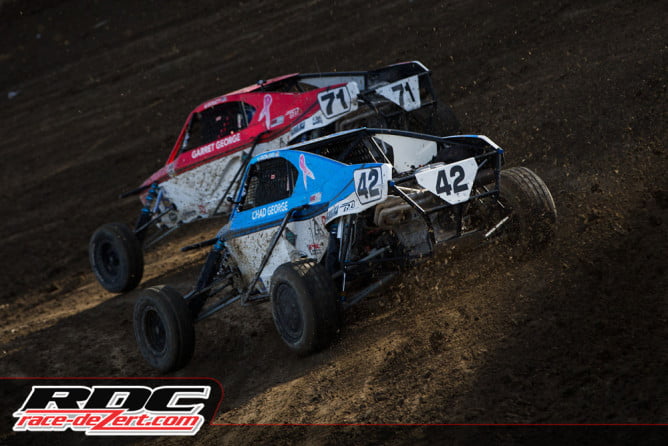 Sterling Cling would win his first Pro Buggy race of his career but Garret George would go home with his first career championship. 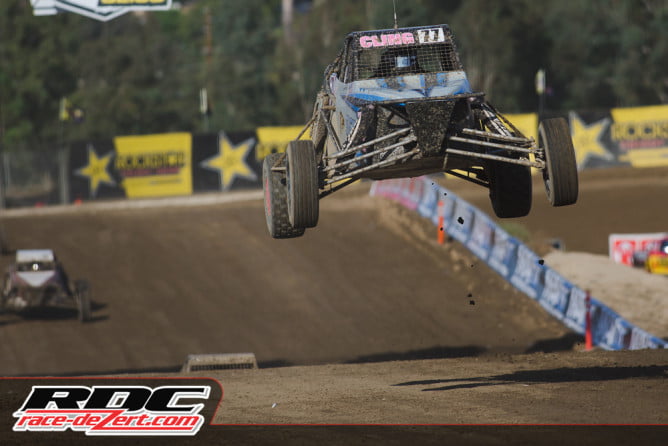 Pro 2 was the final race of the day and had some great racing with multiple lead changes throughout the race and people swapping positions till the end. Brian Deegan got off to an early lead but on lap 7 was forced to pull over, which gave Robby Woods the lead. It would be short lived however after a flat tire would force him to the hot pits which then moved Patrick Clark into the lead. 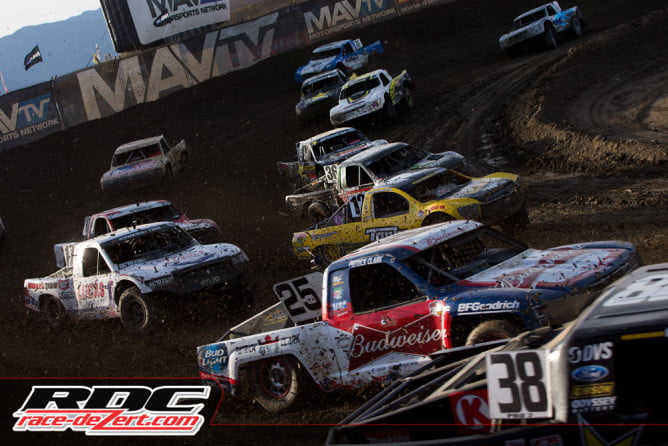 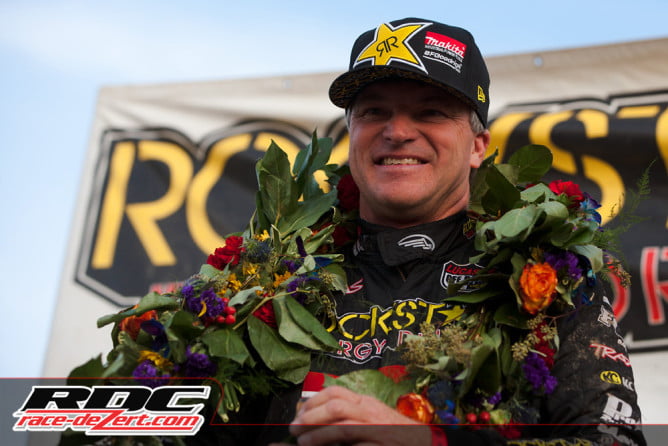 Rob MacCachren who was leading the points started 10th and worked his way up lap by lap to eventually finish second. After Bryce Menzies, who was second in points dropped out of the race, Rob Mac could of cruised to a conservative finish but thats not his style and fought his way up securing another Pro 2 championship. 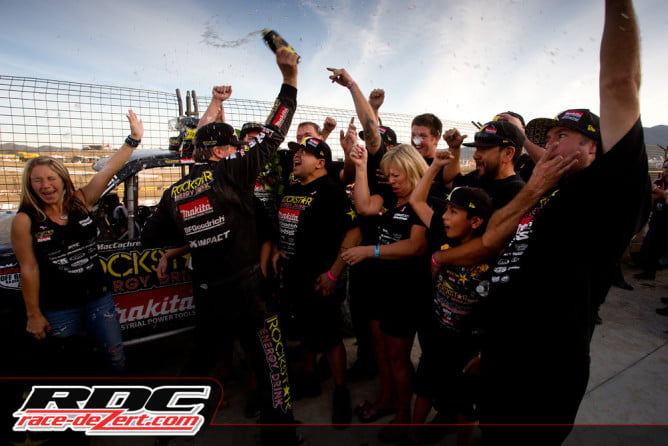 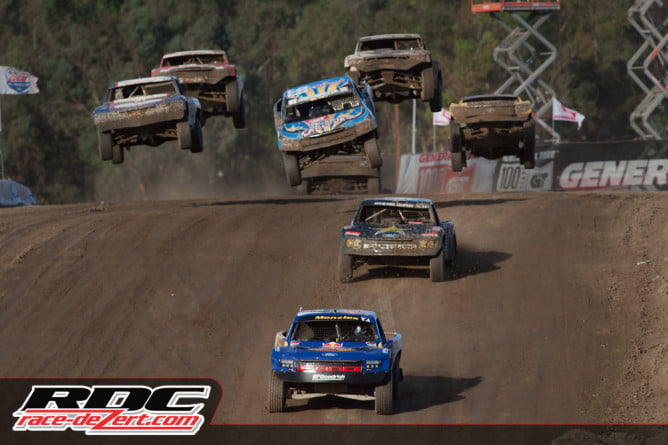