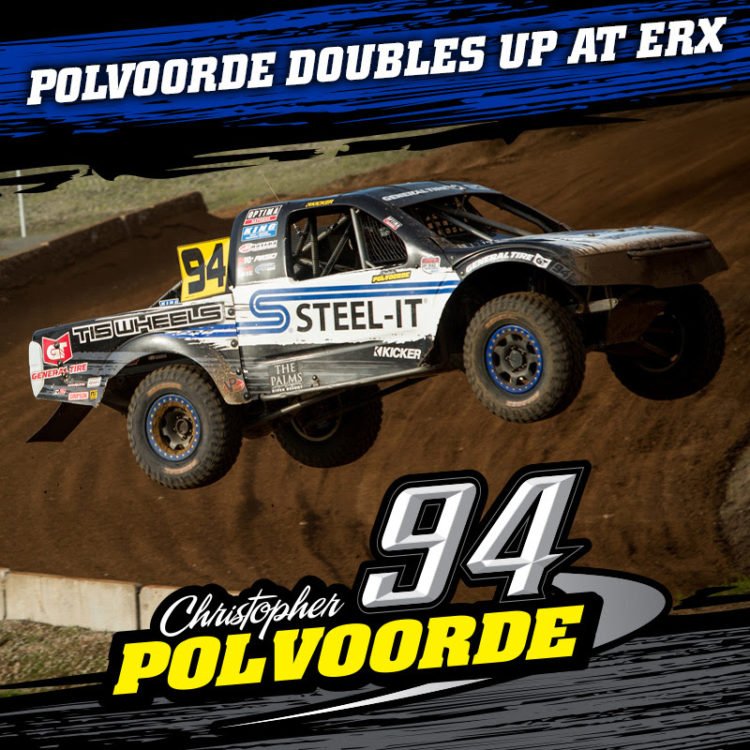 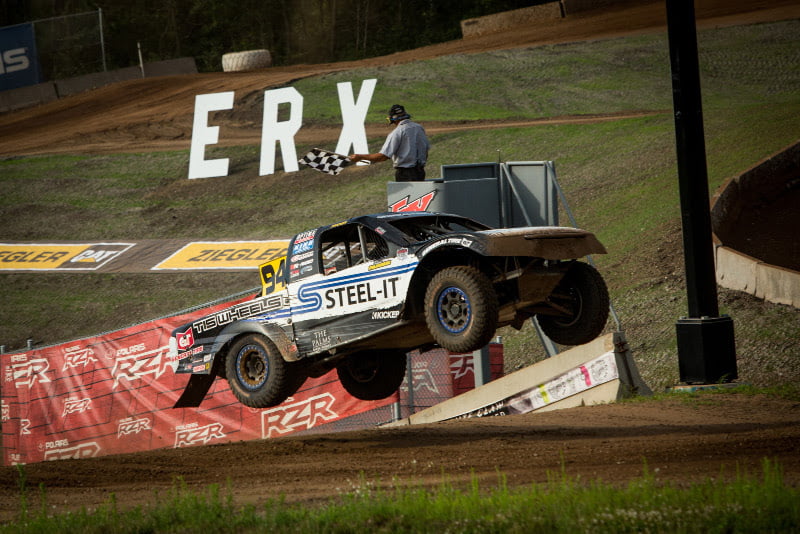 “This was a big weekend for us out here in the Lucas Oil Midwest Short Course League. ERX was all new to us and the first time on the track was Thursday’s Practice session. We came out here trying to maintain our points lead and it was even better than we planned for. It is very exciting to pick up two more Pro Lite wins over some great competition!” stated Christopher.

ERX Motor Park recently made some major changes to layout and track configuration that proved to be game-changers for some. The wild split lane is a lane that leads into a spread out whoop obstacle made passing a strategic calculation that could pay off or send racers falling back. Overall ERX is a new favorite with racers with high speeds and big jumps that makes for great short course racing. “The facility at ERX is world-class and a huge thanks to the Carlson family for their hospitality,” said Christopher. 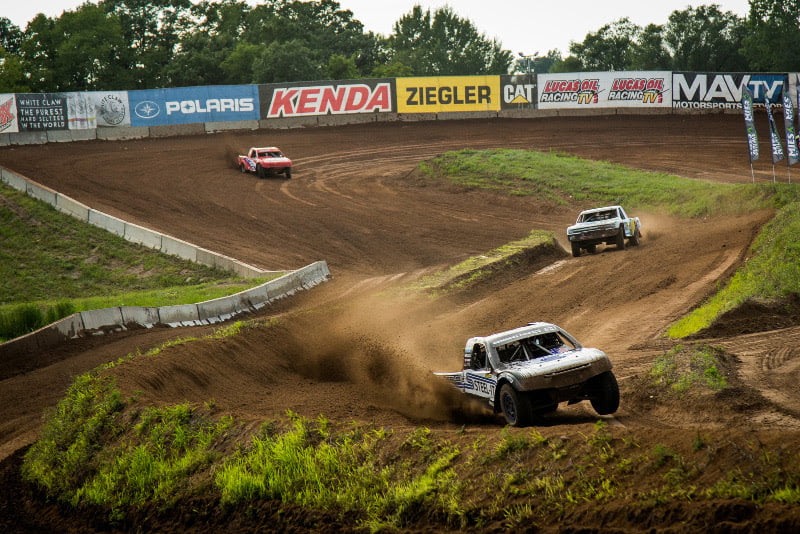 Polvoorde’s STEEL-IT Pro-Lite has been consistently fast and clocked off the quickest lap time during the only practice session. This pace set the momentum for Christopher to benchmark the rest of the weekend.

Friday’s Race 1 saw the #94 Pro Lite starting in 6th position in the 3rd row. Ryan Beat lined up next to him but on the inside line in 5th. On Lap 1, Beat & Polvoorde, the only west coast racers in the field, maneuvered up through traffic on the big banked corner. Christopher saw the opening and pushed past the field to find 1st place and clean air. It was clear sailing for Polvoorde who stepped up the speed and was launching well over 150 feet off the “Fall Away Jump” on the backstretch. 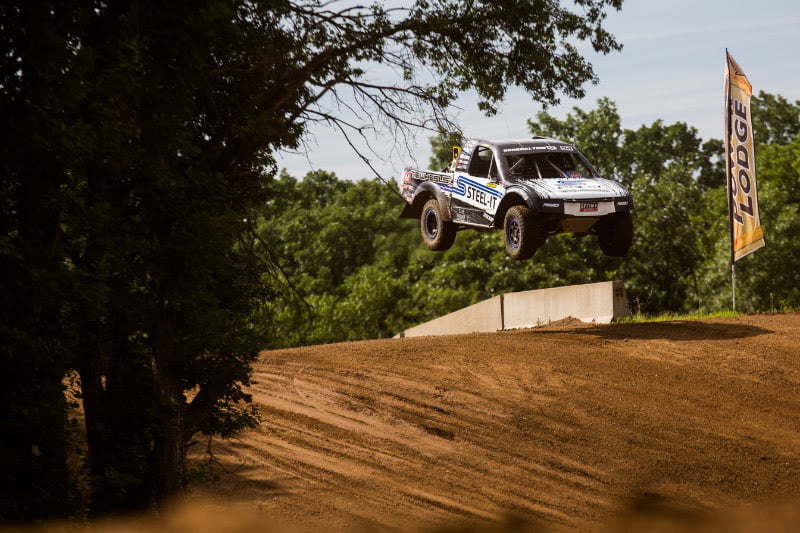 Still leading at competition caution, Ryan Beat made a solid attempt to pass for the lead on the restart, but to no avail. Christopher held onto it, making a flawless run to the white flag and then the checkers for the win! “It feels so good to be on top, exclaimed Polvoorde after climbing out of the truck. “It is our first time to ERX, and this track is a lot of fun!” 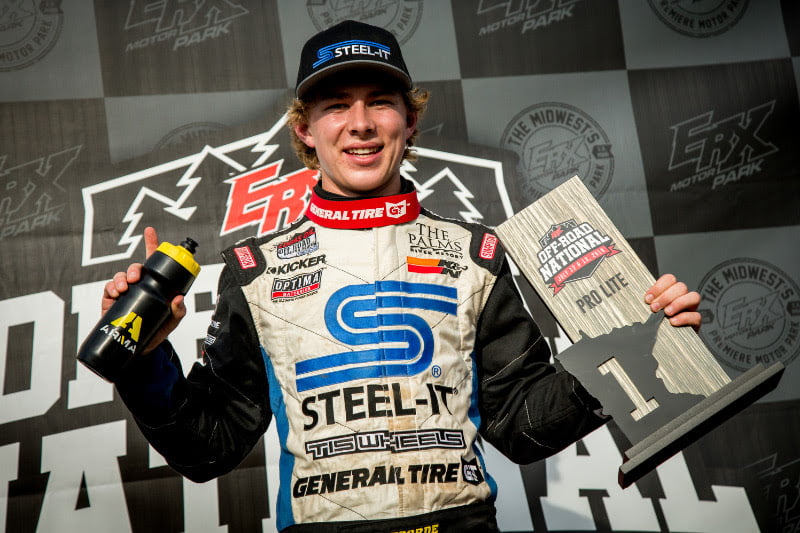 Saturday’s Race 2 was probably the racing highlight of the weekend, and Christopher might also mark this one down for a milestone. Again, starting back mid-pack in 6th place, Polvoorde got a great start and proceeded to make moves right away. The STEEL-IT Truck had assumed 4th position and was heading to the front when another racer, made contact from behind and spun out the #94. Race officials black-flagged the racer, and counted the lap but called for a re-start.

After the Yellow flag and re-start, the racing action got underway with Polvoorde at the back of the field. By Turn 2 or the “K-Korner” Christopher was in 4th place. Ryan Beat had just moved up into 1st, and another half lap later Polvoorde was in podium territory securing 3rd place through the “Talladega Turn” by the end of Lap 2. Christopher was pushing himself and his STEEL-ITtruck to the limit. Driving on the edge down the front stretch, Polvoorde hit the “Booter” tabletop and crossed the lane in mid-air taking 2nd position from Cody Kleiman. Continuing the fast pace, Christopher was doing whatever he could to close the distance on race leader Ryan Beat. Polvoorde at one point biked it putting the #94 truck up on two wheels but saved it and put it back down without losing much ground. 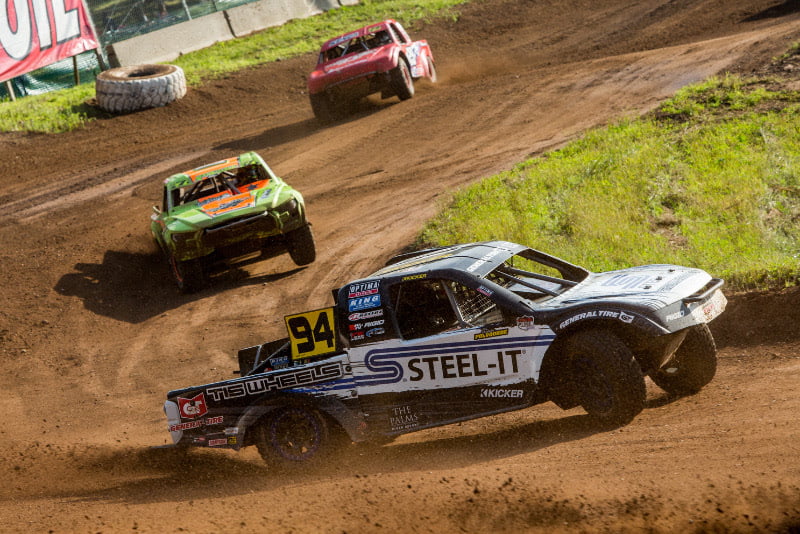 At this point, Christopher was experimenting with race lines trying to find the fastest way around the track. As the competition yellow came out Beat still held the lead. On the restart, Christopher poured on the heat and gave it his all. Beat and Polvoorde were a sight to witness such a short course symphony of controlled chaos. Just very clean, bumper-to-bumper, door-to-door, not holding back, on the edge racing. No room for mistakes, Beat did not give an inch and broadly protected his line while Polvoorde studied every move to set up the scenario for a pass. 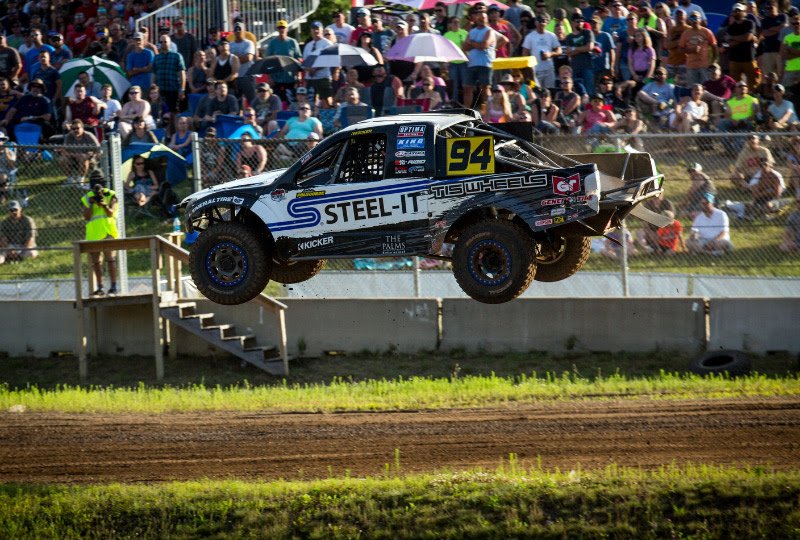 On the second to last lap, Christopher made a run and carried just a little extra speed heading down the hill into the split lanes. Beat makes the smart move to the inside, while Polvoorde daringly rips the outside line. Both trucks fly off the “Fall Away Jump” wheel-to-wheel in mid-air. Jamming through the rhythms, the #94 was perfectly set up and carried just enough extra momentum to advance into the “Talladega Turn” first with barely room to nose out of the corner in position. Polvoorde makes the pass and secures the lead as the two trucks cross the line. The White flag comes out and Christopher races it clean and fast to the checkers to sweep the weekend and make it four straight wins in the Lucas Oil Midwest Short Course League. 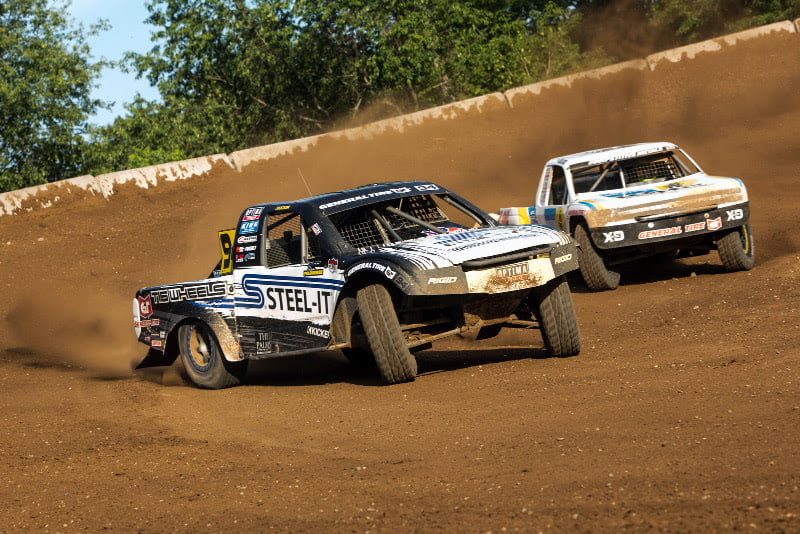 “Wow! Talk about a wild day of racing,” Polvoorde stated from Victory Lane. “It was probably one of the most intense races I have ever been in. It was a wild track with a lot of changing conditions. I got spun out on Lap 1, which sent me to the back. After that, I hunted my way through the pack where I found myself sitting in 2nd place. It was one crazy battle with many close calls, but I was able to pull it off and get the win. I want to give a huge thank you to my entire team and all of my supporters. So much goes into making all this possible and races like this make it all worth it. I have to thank STEEL-IT, TIS Wheels, General Tire, King Shocks, Arma Sport, Brembo Brakes, Rigid Industries, Simpson, Rugged Radios, FK Rod Ends, Kicker Audio, Maxima Racing Oils, K&N Filters, Optima Batteries, Camburg Racing, Magnaflow, MPI Steering Wheels, VP Racing Fuels, ARP, Smart Whips and The Palms River Resort. This gives me four wins in a row here in the Lucas Oil Midwest Short Course League and I look to carry the momentum into Reno in two weeks.” 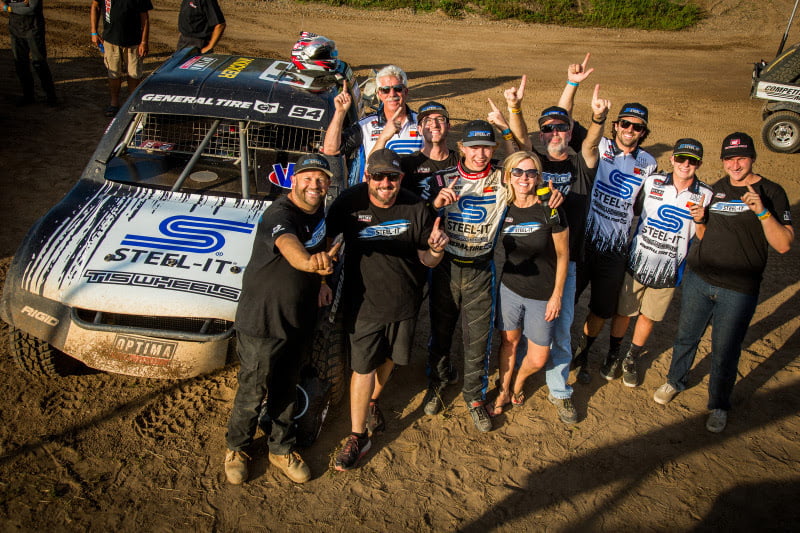 Next on the schedule is The OPTIMA Batteries Silver State Showdown taking place at Wild West Motorsports Park in Sparks, Nevada on July 26th and 27th.

About Christopher Polvoorde & CP Racing Team
Christopher Polvoorde was born on July 28th, 2000 and raised in the Racing mecca of Southern, CA. From a young age, Christopher had an adventurous spirit and a passion for the outdoors and racing. That passion leads Christopher’s life to this day where you can find him chasing sunsets year around on the hills of Mammoth Mt or the waters of the Colorado River. It helps being surrounded by a team of experts including Christopher’s father Chip Polvoorde, who handles anything and everything, Crew Chief Jimmy Davidson who provides the fastest truck on the course, week in and week out, as well as a driving coach and spotter Cory Kruseman, who works with Christopher on his racecraft. With Christopher’s natural speed and a team like this, expectations are high. The CP94 team returned to racing in the Lucas Oil Off Road Racing Series and will be adding the Lucas Oil Midwest Short Course League for 2019 with the goal of lifting the Championship Trophy at the end. With all that Christopher has going on it is hard to imagine but he is also a full-time freshman College student at The University of San Diego on an academic scholarship after finishing high school with a 4.5 GPA. The future is bright for Christopher who takes it all in stride focusing on working hard and enjoying the ride.
Visit // www.christopherpolvoorde.com

About Bink Designs
Bink Designs is a premier digital media marketing company located in San Diego, CA. Since 2007, Bink Designs has been committed to providing cost-effective solutions for clients’ high-end media needs. Bink Designs will work with you to develop a strategy that matches your goals. Bink Designs offers a number of services, including Identity, Print Design, Decals, Web Design, Photography, Apparel and much more.