Polvoorde Racing recently announced that the #94 STEEL-IT / TIS Wheels Pro Lite, driven by young Christopher Polvoorde, was committing to the Lucas Oil Midwest Short Course League 4 event series. This is on top of and in addition to the regular 2019 Lucas Oil Off Road Racing Series where Christopher is a top contender. The Midwest Short Course League season opener held its first event at Crandon International Raceway during the Forest County Potawatomi Brush Run. Polvoorde kicked open the barn doors at “The Big House” sweeping the Pro Lite division with two race wins. “Wow talk about a wild weekend. Racing at Crandon International Raceway is like racing at Daytona. You know going into it that it will be wild,” stated Christopher. 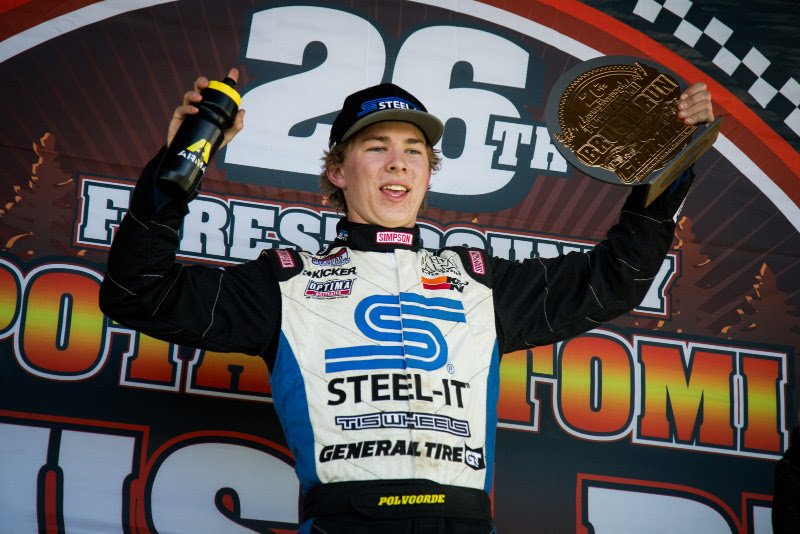 Polvoorde is one of the rising stars of short course off-road racing, so he is making every effort to expand his footprint, clock off those race laps, and go for the victories at the big prestigious events. Anytime you can earn a win at Crandon it will be something that no one ever forgets. Christopher already has a lot to remember and reflect back on. The west coast racer has taken on the challenge to compete at Crandon several times before, and each effort was rewarded handsomely. Before this last weekend, Polvoorde has raced in the Mod Kart division in 4 events and has earned four race wins! 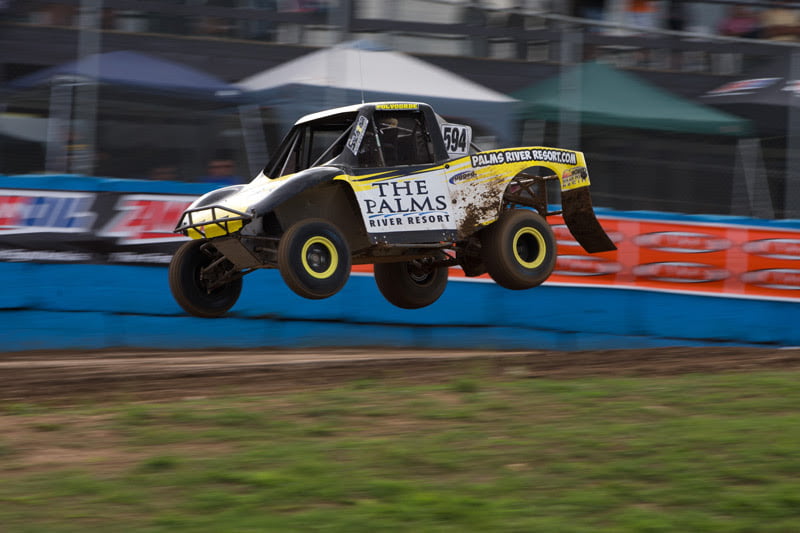 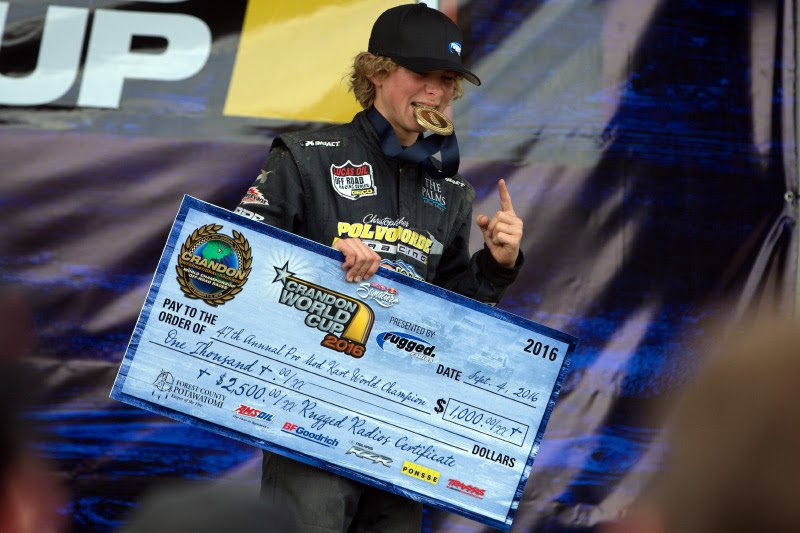 This year it was all different for Christopher racing a V8 powered Pro Lite in the pro ranks against seasoned & experienced drivers on their home turf. “Having never raced at Crandon in a full-size truck, I was very nervous going into the weekend. We arrived early and were pretty much the first racers on site to be set up. The weather started dumping rain non-stop, so we just hung out in the pits pumping tunes through the Kicker Audio Bullfrog Bluetooth speakers and got everything in place. Eventually, practice & qualifying both got canceled. That was pretty disappointing as we knew we were going in blind with the truck setup having never been on the track.” 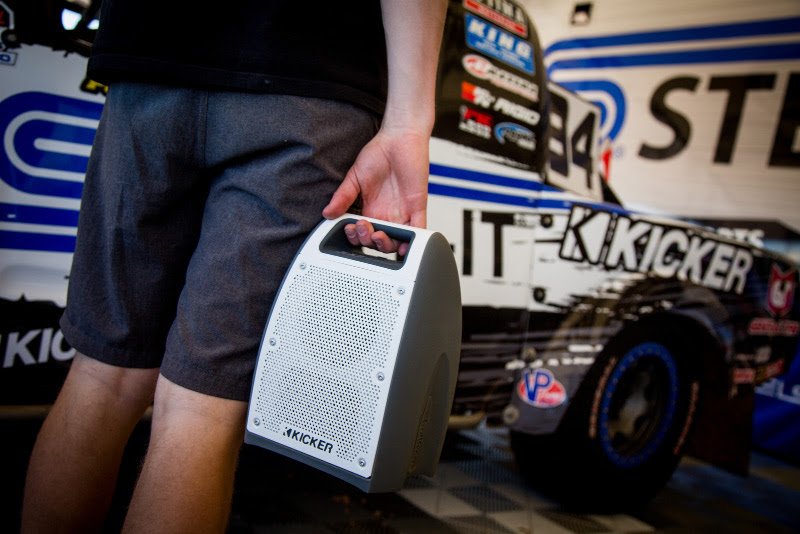 Polvoorde continued, “After a random draw, I was issued the 5th gate pick. It was not ideal, but it wasn’t terrible. Lining up for the land rush start and knowing that the entire field will be stuffing into Turn 1 at full speed was kind of scary. Not having hit the track all weekend added to the nerves before the race, but it all disappeared as soon as we got the green flag! I got through the first corner free & clear and ended up in 2nd place. I was comfortable with that and perfectly positioned to move up.” 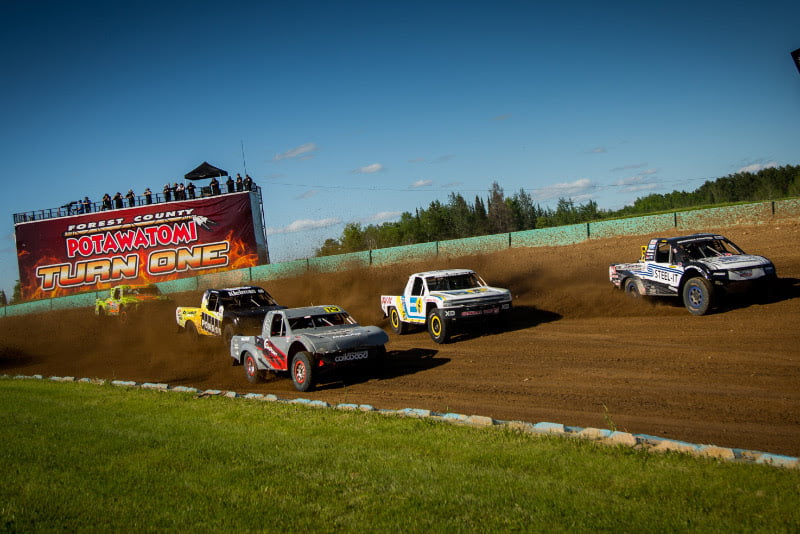 “I just kept my focus ahead and began taking shots looking to make a pass on Ryan Beat,” Christopher explained. “Beat, and I were showing very similar speeds, so I knew the only way for me to get ahead would be for him to make a mistake. On about the 3rd or 4th lap, the post holding my tear-off shields broke away from my helmet, leaving me with no tear offs and limited visibility. Which defiantly added to the chaos and the roost at Crandon is probably the worst roost around. I kept my cool and worked through it mentally. After a few laps of door-to-door battling with Beat, he eventually made a mistake. I was able to get by and out front to hold him off for the win! It was an awesome feeling winning the opening round of the Midwest Short Course League along with another victory at “The Big House”! 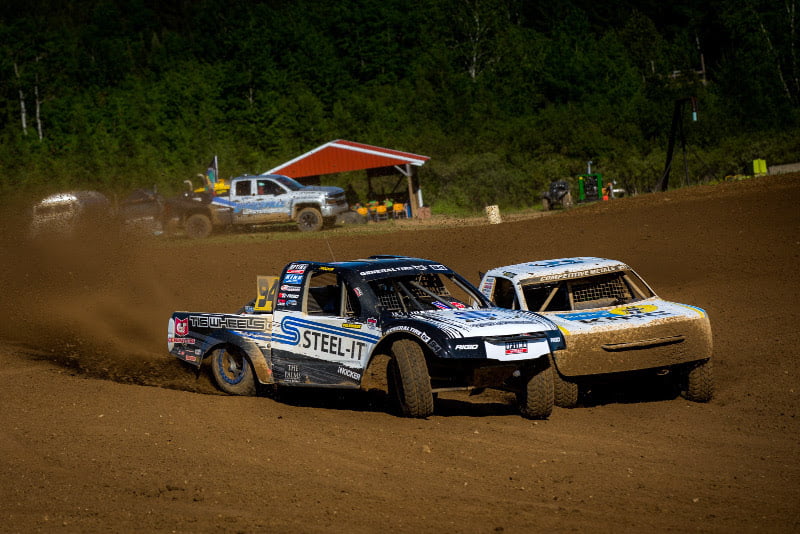 For Sunday – Day 2, Polvoorde Racing made some minor adjustments to the STEEL-IT Pro Lite and had the truck looking as good as ever. Race officials inverted the Top 6 starting positions based on Day 1 racing results, which put Christopher in the 6th gate, again, less than ideal to capture the highly coveted early track position. “I was feeling good and fully energized on ARMA Sport Nutrition. The truck was working perfectly. I felt like it was mine to win again!” Polvoorde said. “I blasted the fast pedal and got a great start. The General Tire Grabbers tore through that soft Wisconsin dairy field, and I railed the outside of Turn 1, allowing me to get the holeshot. After that, I just put my head down and hit my marks, which allowed me to bring it home in 1st place and on top of the box!” 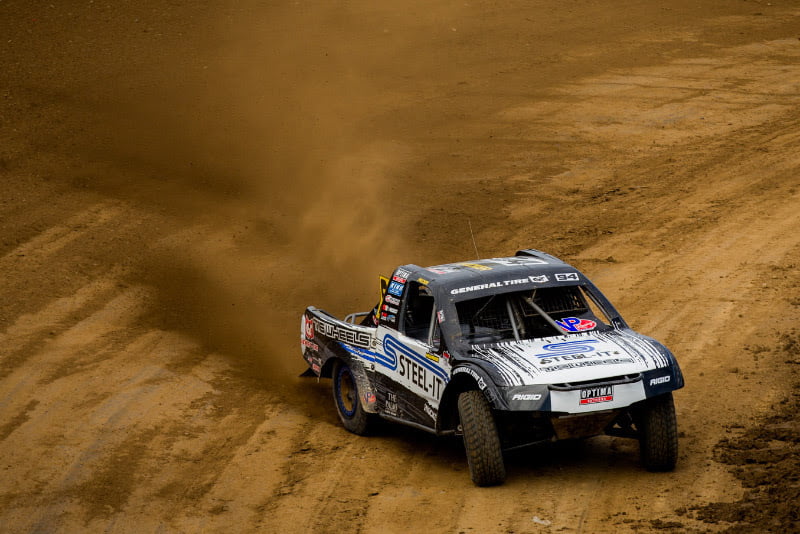 Overall it was a perfect weekend at “The Big House” and a great way to start the Midwest Short Course League,” declared Christopher. “Jimmy Davidson, my Crew Chief had the truck on point, my spotter, Cory Kruseman kept me calm and focused, which it definitely showed as we won both days thanks to the amazing team behind me. This win made it 6 wins in a row for us at Crandon, so you could say it’s one of my favorite tracks. Thanks to everyone who makes this possible, weekends like this are why we work so hard!” 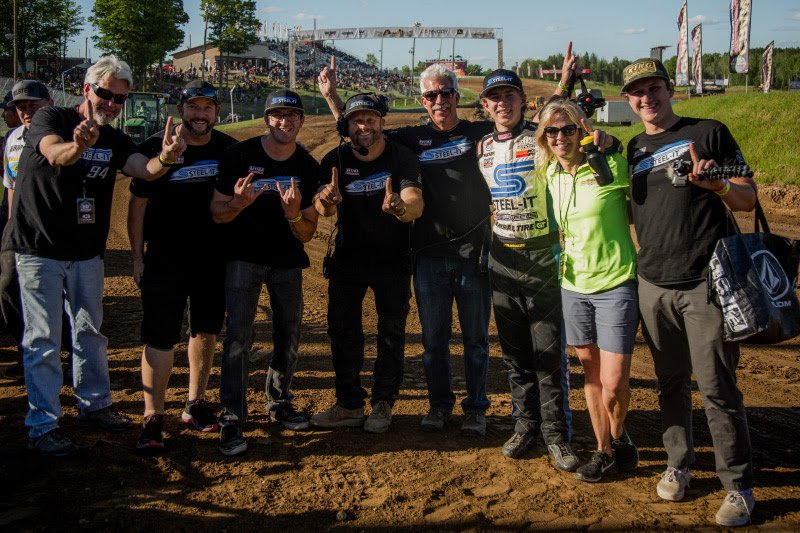 About Christopher Polvoorde & CP Racing Team
Christopher Polvoorde was born on July 28th, 2000 and raised in the Racing mecca of Southern, CA. From a young age, Christopher had an adventurous spirit and a passion for the outdoors and racing. That passion leads Christopher’s life to this day where you can find him chasing sunsets year around on the hills of Mammoth Mt or the waters of the Colorado River. It helps being surrounded by a team of experts including Christopher’s father Chip Polvoorde, who handles anything and everything, Crew Chief Jimmy Davidson who provides the fastest truck on the course, week in and week out, as well as driving coach and spotter Cory Kruseman, who works with Christopher on his race craft. With Christopher’s natural speed and a team like this, expectations are high.The CP94 team returned to racing in the Lucas Oil Off Road Racing Series and will be adding the Lucas Oil Midwest Short Course League for 2019 with the goal of lifting the Championship Trophy at the end. With all that Christopher has going on it is hard to imagine but he is also a full-time freshman College student at The University of San Diego on an academic scholarship after finishing high school with a 4.5 GPA. The future is bright for Christopher who takes it all in stride focusing on working hard and enjoying the ride.