The General Tire Jeepspeed series presented by KMC Wheels kicked off their 2018 season with a demanding test for racers at the Best In The Desert series Parker 425 in Parker, Arizona. The race was brought to you by Jasper Racing Engines. It seemed like only yesterday that they were crowning the 2017 champions at the year-end awards dinner. Actually, Class 1700 Jeepspeed Challenge Champion Rob Suebert, Class 2700 Jeepspeed Cup Champion Wayne Guidinger, and Class 3700 Jeepspeed Outlaws Champion Billy Bunch were up on stage receiving their awards, with their fellow competitors only a few weeks ago. They have barely had enough time to put the trophies away, unload their prizes, and cash the checks. 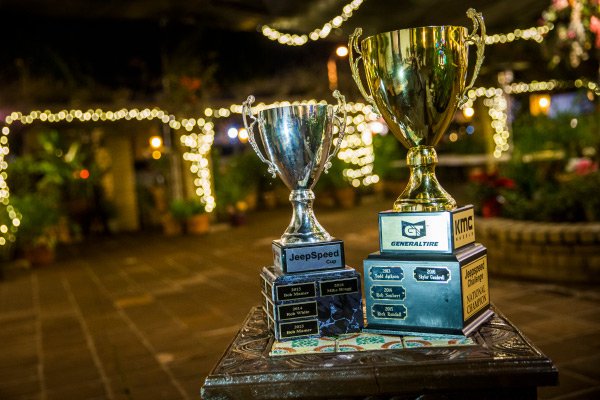 Jeepspeed had entries in every class for Parker, teams were anxious to start building their points up for the 2018 Championship. Everyone had a clean slate but on race morning, dusty visors were the norm. It has been so dry in Parker that the dust on course was thick enough to walk on. 1700 Champion Rob Suebert got the holeshot at the drop of the green flag and was leading on lap one. He was passed by Garett Allred in the pits, but they caught back up to Allred’s bumper and were looking to pass him back when they smelled something burning. Smoke soon poured into the cab so they had to pull over and check it out. The Parker course is known for how rough it is, and the constant pounding broke their motor mounts. The engine fell down and the serpentine belt was rubbing against the cross member. “The competition is tight, there are several trucks that are really fast,” said Suebert, “It’s going to be a tough year, being the Champion does not get you special treatment.” Suebert is hoping for a change of fortunes at the Mint 400. 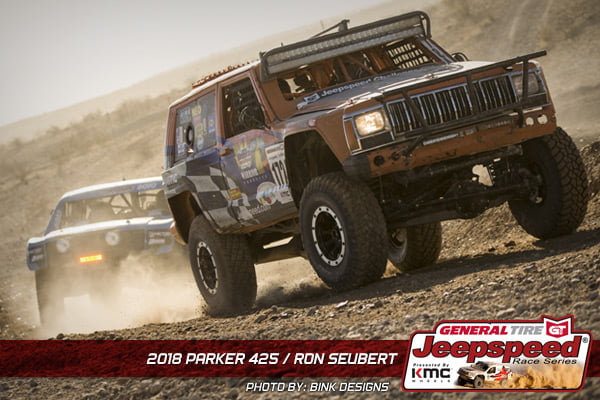 With Suebert off his tail, Garett Allred was able to continue with his strategy and go on to the win. “It was so dusty, we didn’t want to push too hard,” said Allred, “We ran our own race, and stuck to a pace that seemed to work out. We were chasing a bunch of gremlins in our Grand Cherokee last year so it feels great to be back on top. We had no flats to our General Grabber X3 Tires and KMC Wheels. At mile 110, my co-driver got sick so we had to stop for a change. The dust was so thick, he got disoriented. You could not see 10 feet in front of the Jeep. We are excited about the Mint. Our entry went out the same day we got it.” Despite the rocks, rough course, and lack of visibility, Garett managed to average 43 miles per hour. 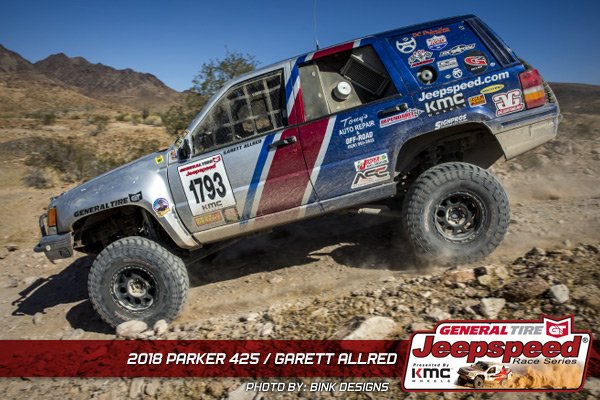 Second place in 1700 went to Scott Biehl who has a very nice Jeep Cherokee. He had been racing for 32 years and finally realized his dream of standing on the podium in the Jeepspeed series. At the time of this writing, he was unable to sit down for an interview. He is probably still on cloud 9. 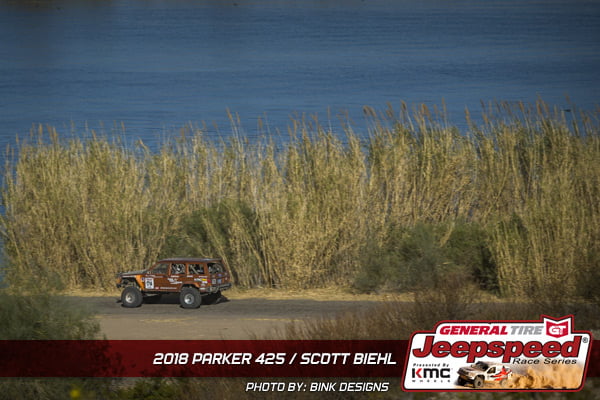 Third place in 1700 Jeepspeed Challenge went to Mark Kammerlohr and his son Clayton. They also had Ian Massey with the team. They suffered a DNF (did not finish) in Parker last year, so they had some unsettled business. “Last year we rolled at race mile 28,” said Mark Kammerlohr, “When my Son and I passed mile 28 on the first lap, we gave each other a high five. It was all new to us from then on. We were glad to have Ian along with us. We pitted with him at Vegas to Reno last year and have built up a comradery with him. After he sold his car, we didn’t want to lose his contributions so we invited him to Parker. We had a minor brake issue but got it fixed in the Baja Pits. On the second lap we had a class 10 car come up on his quickly and nerf us. We didn’t get any warning. We got passed by a few of them, but ran our own pace.” The Kammerlohr’s have shown a steady progression since joining the Jeepspeed series at the end of the 2016 season. They finished 2nd in points last season. 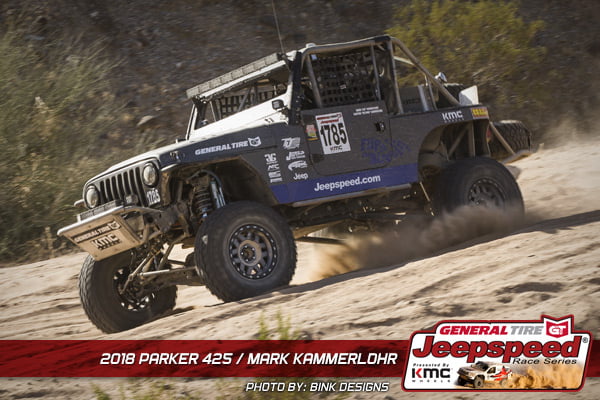 Mark and Clayton Kammerlohr are one of several Father and Son teams in the Jeepspeed series. Guy Alldredge from Colorado Springs is back in Jeepspeed with his son. Guy raced with us from 2002 to 2007 or so. Garett Allred’s Father Brad is a huge part of his race team, and Mike Shetler races with his Son Bob. 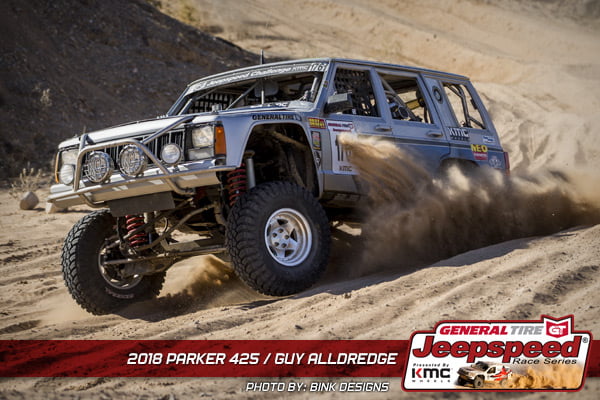 Mike Shetler won the 2700 Jeepspeed Cup class. He shared the driving with Benny Pena. Mike drove with his Son on lap one, And Benny drove the second lap with his son Benny Jr. navigating. Benny Jr. has asthma so they also banded Marcie Hricziscse just in case. It was a good thing because Bob Shetler suffered from the same disorientation that Allred’s navigator experienced and threw up. Marcie wiped the helmet out, put it on, and did her job like a trooper! The navigator has to keep their eyes on the GPS to keep the truck on course. When the horizon is obscured by dust, it makes it easy to get sea sick. “It was an awesome crazy race,” said Mike Shetler, “Marcie had to get in, we had a malfunction of our throttle position sensor so our air/fuel ratio was way off. We thought we would run out of gas. We were almost to main pit when a brake caliper came loose and wedged into the wheel. We could see the pit, but had to get it freed up by ourselves. We got there for the driver’s change and Benny had a trouble free lap for the win. I am excited for this season. I have two kids who graduate from college in June, so I am able to do 5 races this year!” 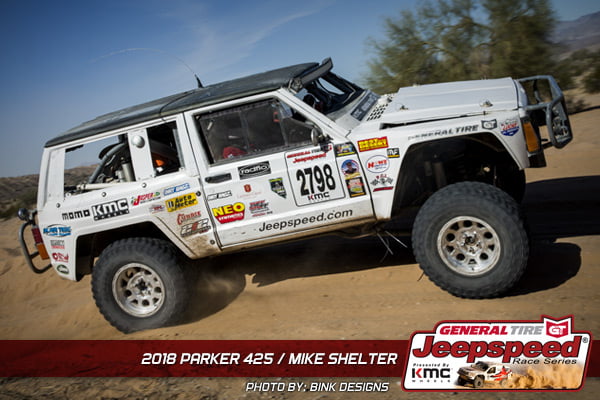 Class 3700 Jeepspeed Outlaws winner Conner Batham’s new Dodge race truck just would not be done in time for the race. Parker is one of his favorite races, and he didn’t want to miss out on the points, so he convinced Raymond Gray that they could get his old race truck into shape and conforming to the 3700 rules in time for the race. They created their race truck in a little over 48 hours. Their custom Jeep Comanche race truck was up for the task. They finished for the win, and now Raymond is hooked and racing the truck at the Mint 400! “We got the truck together late Thursday night,” said Batham, (notice he said together, and not done), “Going through contingency on Friday, the truck was getting really hot. It turned out to be an air pocket, an easy fix. On lap one I took it easy. My co-driver Keith Yoder and I had never even driven the truck. As the miles went by we felt more comfortable and had a little fun, but still at a conservative pace. My Dad and Raymond had a problem with the fuel pump losing pressure on lap 2 so they just ran both pumps at the same time. We now can focus on getting our Dodge ready for the Mint!” 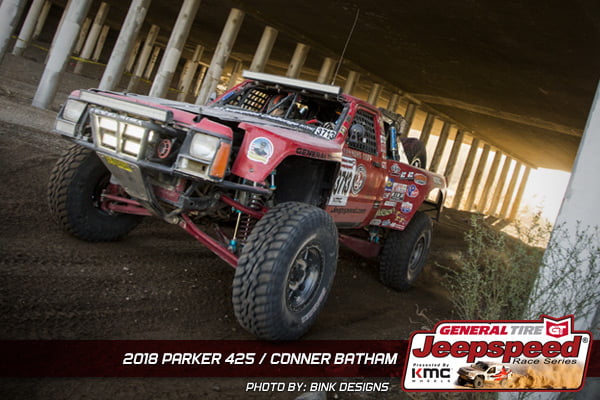 The rich contingency program in the Jeepspeed series includes special bonuses paid by the
sponsor bringing you each race. A $500 bonus will be paid to each class winner. The Parker
425 was brought to us by Jasper Racing Engines. The Mint 400 will be brought to you by Rugged Radios. The Silver State 300 is brought to you by GG Lighting. Vegas to Reno will be brought to you by Rock Krawler Suspension. The Laughlin Desert Challenge will be brought to you by Tuff Stuff 4X4. In addition, Southwest Boulder & Stone will be giving $500 bonuses to winners at every race. Tuff Stuff 4X4 will be giving offroad accessory products to the winners of each class at each race. NEO Synthetic Oil will supply a case of oil for a win with their decal in place, and Action Sports Canopies will be giving away a set of team flags for the winners of all 3 classes at V2R, and also a complete canopy for the overall Jeepspeed champion at the end of the season. The support for the Jeepspeed series by sponsors General Tire, KMC Wheels, Currie Enterprises, Action Sports Canopies, Southwest Boulder & Stone, GG Lighting, Jasper Racing Engines, NEO Synthetic Oil, Rugged Radios, Tuff Stuff 4X4, Rock Krawler Suspension, King Shocks, and T&J Performance is responsible for many of the team’s achievements. Now that Parker is in the books, everyone in the General Tire Jeepspeed series is going full speed to prepare for The Mint 400 March 3-11 in Las Vegas, Nevada.

About Jeepspeed
The Jeepspeed series is a competitive, cost effective series that has pitted Jeep vehicles against each other on challenging desert courses since 2001. Unlike the more expensive spec racing classes, there is no obligation to purchase your race vehicle or parts from the series organizer. You build your own vehicle the way you like as long as it fits within the rules. Jeepspeed offers the most fun and closest racing in the desert today. Jeepspeed series is supported by General Tire, KMC Wheels, Currie Enterprises, Action Sports Canopies, Southwest Boulder & Stone, GG Lighting, Jasper Racing Engines, NEO Synthetic Oil, Rugged Radios, Tuff Stuff 4X4, Rock Krawler Suspension, King Shocks, and T&J Performance
Visit // www.jeepspeed.com