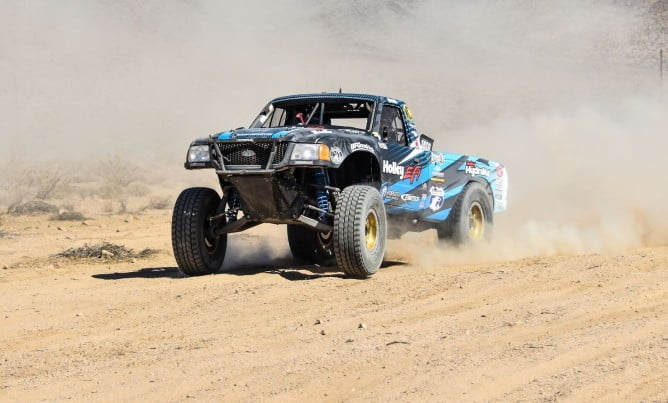 With the dust still settling from the first race of the season, the drivers of Competition 1450 Series make the journey to Ridgecrest, Ca. for one of the toughest races of the year. The Snore Motion Tire 300 is a notorious truck killer with large rock obstacles and unforgiving dust where one wrong decision can end your day as quickly as it began. Saturday morning arrives and all eyes are on Justin Oquendo in his Holley EFI sponsored ranger, after a dominating first place finish at the King Shocks Battle at Primm. Daniel Tyler is first off the line and sets the pace for the rest of the class to follow. With no wind and a lingering dust cloud, drivers fight to keep the trucks on course and in one piece. After the first lap, the casualties start to build up. Justin Oquendo has a demanding lead until a rock takes out his front suspension and opens the door for Robert Moruzzi, Roy Tomkins and Gregg Zumwalt to put minutes between them and the rest of the pack. While the top three trucks battled for the lead, Keith Smith and Jeremy Deakins push through part failures and rock damage to make it to the finish line. Keith Smith hits a rock which damages his driveshaft and sets him back in the field. Struggling with a bent driveshaft, Keith Smith pushes on to finish along with Jeremy Deakins who lost 3rd gear and struggled with motor issues toward the end of the day. As the drivers start their third and final lap, Robert Moruzzi has a demanding lead but hits a rock and cracks his front wheel causing him fifteen minutes of down time, allowing Gregg Zumwalt to drive past and take first place with Roy Tomkins landing in second. Robert managed to get back on course and take the third place trophy. 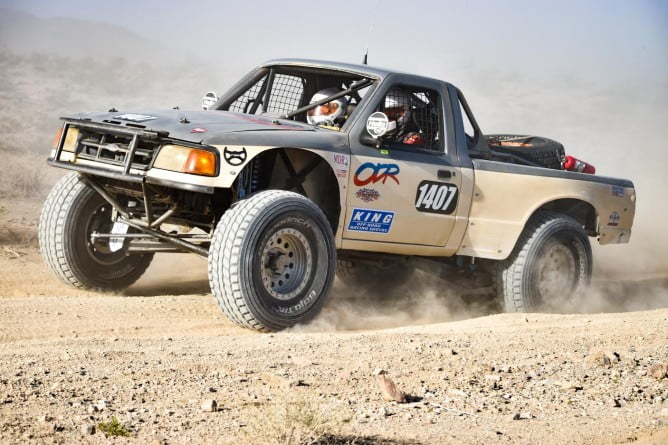 After a tough race, the drivers are already thinking about the PCI 250 in Lucerne, Ca., the third of four scheduled races for the Competition 1450 Series. Robert Moruzzi, Ryan Agius and Justin Oquendo hold the top three spots heading to Lucerne with the rest of the drivers within striking distance. SHOP NOW FOR THE LATEST IN 1450 Clothing