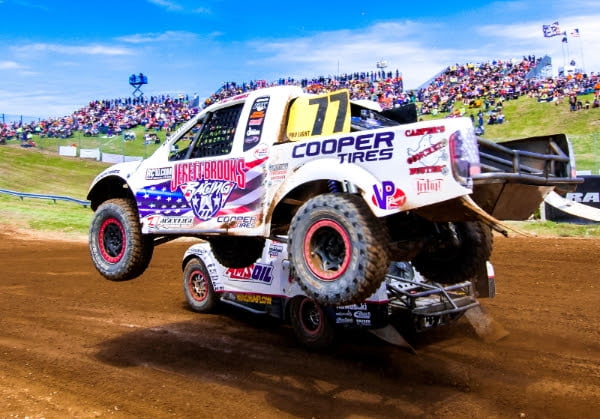 IRVINE, Calif. – (Oct. 29, 2014) TORC: The Off-Road Championship Presented by AMSOIL announced today that Cooper Tire & Rubber Company will continue its relationship as an Official Series Partner for the 2015 season. Cooper was the primary sponsor for 2014 TORC PRO Light champion Jerett Brooks and a sponsor of drivers such as PRO 4WD runner up Mark Jenkins, Arie Luyendyk Jr., Keegan Kincaid, and Doug Mittag. TORC also announced that Cooper has been named its 2014 Tire Manufacturer of the Year.

TORC Series teams count on their race tires to handle some of the most brutal punishment in motorsports. Given Jerett Brooks’ dominating PRO Light championship season and the come-from-behind wins in PRO 4WD by Mark Jenkins, it’s easy to see why so many teams rely on Cooper to provide the rubber for their off-road trucks.

“Cooper had an incredible season in 2014 resulting in nearly 50 podiums across TORC’s three PRO racing divisions including a championship in PRO Light,” TORC Series President, BJ Birtwell noted. “As the TORC 2014 Tire Manufacturer of the Year, I’m sure many teams will reach out to Cooper looking to get their hands on their winning products. As one of the most fan-friendly sponsors in the sport, we are excited that Cooper is returning for another season of TORC racing.”

“We are thrilled to continue with TORC and to be honored as the TORC 2014 Tire Manufacturer of the Year,” said Cooper’s Director of Motorsports Chris Pantani. “Watching Jerett Brooks’ amazing PRO Light Championship run, and knowing his tire of choice was the Cooper Discoverer STT, which is the same tire that consumers can purchase from their local Cooper dealers, was incredible.

“Not to be outdone, the Cooper Discoverer PRO tire also had its share of podiums in the PRO 2 and PRO 4 classes,” Pantani added.

About Cooper Tire & Rubber Company
Cooper Tire & Rubber Company is the parent company of a global family of companies that specialize in the design, manufacture, marketing, and sales of passenger car and light truck tires. Cooper has joint ventures, affiliates and subsidiaries that also specialize in medium truck, motorcycle and racing tires. Cooper’s headquarters is in Findlay, Ohio, with manufacturing, sales, distribution, technical and design facilities within its family of companies located in 11 countries around the world. For more information on Cooper Tire, visit www.coopertire.com, www.facebook.com/coopertire or www.twitter.com/coopertire.

About TORC
TORC: The Off-Road Championship Presented by AMSOIL is the nation’s premiere short-course, off-road truck racing series. Known as a collision between action sports and motorsports, TORC is the ultimate battleground for 900-horsepower race trucks competing to win the prestigious TORC National Championship. Fans from all over the world enjoy TORC through high-energy events as well as the TV broadcasts on NBC Sports. For more information, visit www.torcseries.com.