COPS RACING WINS THE FREEDOM 250 – race-deZert.com
In a Class 1 Racer Engineering buggy, COPS Racing team took the overall win at M.O.R.E.’s Freedom 250 with Zak Langley and Dan Martin at the wheel.
“This was a really important race for me,” said Zak Langley.  “This was my first class 1 race so, to go up against a big field with so many good drivers and come out with a win feels really great!  I think that racing class 12 then getting seat time in class 10 really helped, not to mention all the advice and mentoring I’ve had from great drivers like Dan Martin, Dale Dondel and Bernie Carr.   It’s a cliche, but we had  a textbook race.  No mechanicals or flats.   My co-driver, Sean Williams, kept me focused and we handed the car off to Dan Martin and Brandon Chrisman in first place.  They drove a perfect race and put more time on the field.   I’m really proud of the whole COPS racing team for such a great job!” 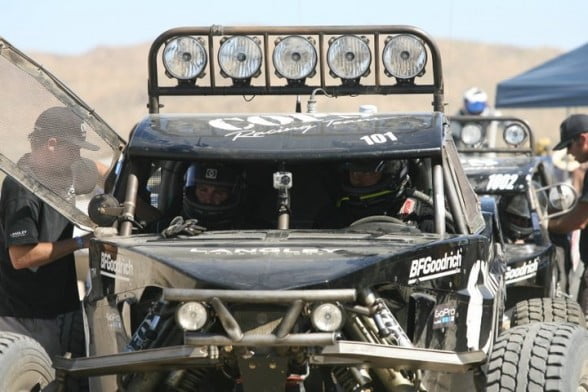 John Langley and son Morgan Langley also raced in Class 10 and came in 5th Place after a flat and some mechanical problems.  Said John Langley, “We didn’t have the great run Zak and Dan had but we had a whole lot of fun in a competitive field.”

The Cops Racing Team ran two Racer Engineering cars with Class 10 and Class 1 entries.  Their future plans include yet another Class 1 and Class 10 car being built by Dale Dondel’s Racer Engineering team, with a scheduled delivery of the Class 10 before the end of the year, shortly followed by the new Class 1 car for the 2012 racing season, primarily with SCORE.  The Langleys will be teamed in the future with Dan Martin and Dondel for that season, marking the beginning of their fourth season in off-road racing. 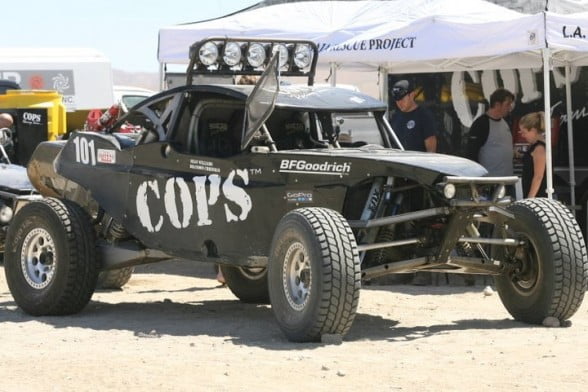 “We’re relatively new to this great sport”, says John, speaking on behalf of his sons and the rest of the team.  “But we’re hoping to up our game with every race, and I’m proud to say Zak has made a great debut in Class 1 with his win at the Freedom 250.  He’s also running 3rd place in the Class 12 championship run with SCORE, so we’re hoping  he can keep it together after his 2nd Place showing at the Baja 500 this year.  In any case, he is showing great promise!”

COPS Racing Team takes its name from the COPS television show, now in its 23rd season on FOX Broadcasting Network, making it one of the longest prime-time TV series in history.  In addition to their work in the crime arena, Langley Productions recently finished “Road Warriors” for SPIKE TV and has filmed the 2011 Baja 500 in 3D for EPIX3D, debuting in January 2012.